The Mystery of the Chayachiy (“Seagull”) Cliff, or Where Did its Dwellers Go?

A landmark natural object - Chayachiy Cliff as if woven from pebbles and boulders - is located in the area of the Primorsky Ridge, on the territory of the Pribaikalsky National Park.

This high steep rock is situated on the western coast of Lake Baikal, at a distance of about 3.5 km ещ southwest of Cape Bolshoy Kadilny. A hiking trail between the villages of Bolshoi Goloustnoye and Listvyanka passes through this rock.

Almost all travelers that encounter this unique cliff for the first time describe their impressions with similar words: a natural object that amazes and fascinates with its wild beauty; you involuntarily gasp at the sight of the vertical rock walls interspersed with ledges, its upper part is pitted with numerous caves and niches and resembles an ancient cave city. This is the beginning of the Chertov Most (“Devil's Bridge”) Tract, its lower part is supported by the Chayachiy Cliff: the latter seems to grow out of the water, presenting an obstacle to the travelers going along the trail.

This steep slope was named this way because of numerous flocks of herring gulls that used to nest here.

However, the Rocks are Eternal! 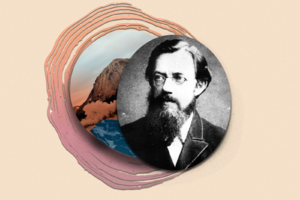 Whose name does the Chersky's shore bear?

The Chayachiy Cliff is a unique accumulation of outcrops sedimentary rocks of the Jurassic Period in one place (Jurassic Period extended from 201 to 145 million years ago). Today these outcrops consist of pebbles and boulders soldered by sandstone. All this looks like as a placer mine of porous rough gray rock. Only an expert can see archaeological significance of this object. Besides, they believe that in this place of the Baikal coast Jurassic deposits are the most open and convenient for exploration.

The uniqueness of this cliff was described in the first scientific sources about the lake: for example, Johann Georgi who traveled to these places in 1770s already mentioned this name. Ivan Chersky also actively studied geology here and examined soil structure.

No doubt, such state of things makes the Chayachiy Cliff a rare geomorphological value. Therefore, it is no coincidence that the Irkutsk Regional Executive Committee decided to give the status of a state nature landscape monument of aesthetic and cognitive significance to this cliff on February 5, 1985. In 2015, an inventory was made, so today the Chayachiy Cliff is recognized as a regional geomorphological natural monument with a total area (including water) of 1.04 hectares with a high recreational potential.

The hiking trail from Listvyanka to Bolshoye Goloustnoye crosses several rocky coast sections that end in a sheer drop going into the water, one of these is called the Chertov Most (“Devil's Bridge”).

Chertov (“Devil’s”) Bridge cut down in the Chayachiy Cliff is an artificial pit made in the rock massif – this “bridge” drops into Baikal from a 30-meter height. When there was no such ledge cut in the rock, the transition here was incredibly dangerous. The fact is that earlier the trail on the cape passed through a narrow stone ledge. In one place that ledge was interrupted by a vertical crack, and a bridge of poles was made for the passage over the many-meter vertical cliff. It was called Chertov Bridge (“Devil’s Bridge”). The name was assigned to it because walking on shaking poles above the abyss was rather uncomfortable. 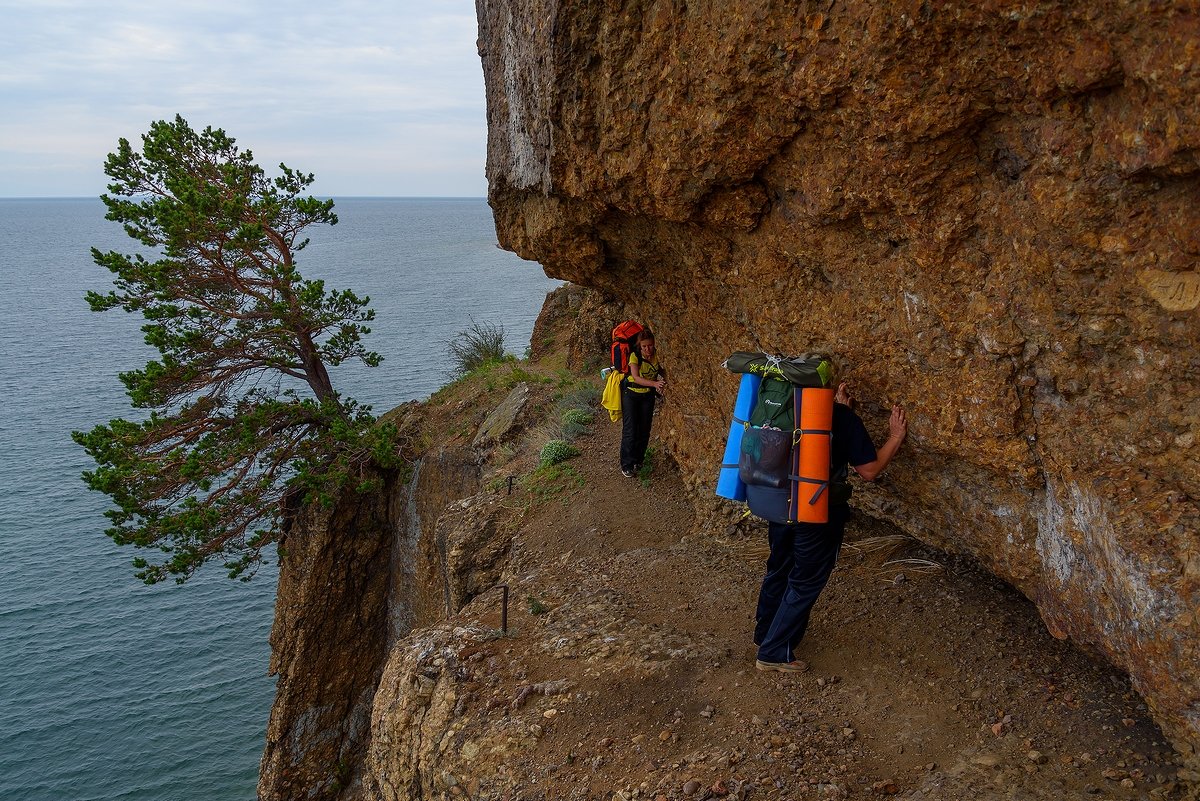 There is a legend eagerly told by locals. Once a man met a bear on that bridge. None of them was going to give way. Besides, the path was so narrow that it was almost impossible for them to pass by each other. They stood this way for a long time, but then the moment came when the animal could no longer tolerate the human gaze. He tried to turn back, but slipped and fell from the cliff onto the sharp stones lying in the surf.

However, nowadays, the trail around the cliff has been broadened and is relatively safe, especially in summer. Travelers are no longer afraid of passing through the Devil's Bridge. Moreover, they try to linger there for a while to admire the beautiful view.

The passage along the rocky bridge is so broad now that horses freely pass along it.

Does the name of the cliff correspond to the real state of things?

Herring gull is the largest, most widespread and numerous gull species on Lake Baikal and in the Baikal region. These birds prefer to nest in large rookeries, although there are also small settlements and separate nesting couples. Besides, the situation connected with the mass disappearance of the herring gull from the cliff territory is completely unexplainable. The very name of this geographical point is directly related to the presence of noisy bird flocks covering the rock with a silver blanket. Today you can meet only single birds resting on the ledges of a former noisy bird market in these places.

It is very difficult to understand the reasons for the "exodus" of the herring gull from the cliff, because its unique adaptability to changing conditions is widely known.

Firstly, the mass distribution of this gull species is explained by environmental plasticity, because, unlike other gull species, it successfully breeds offspring both on the swamps and on the rocks. 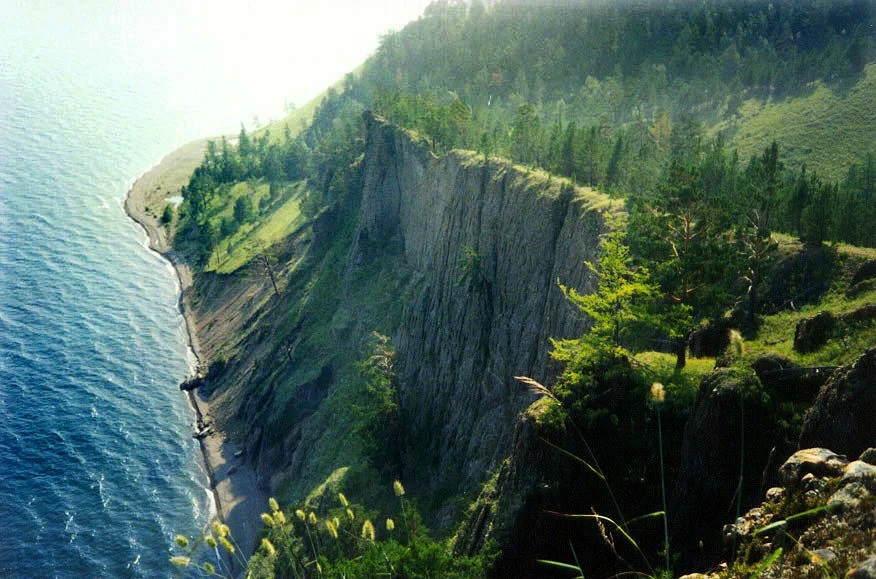 Secondly, the bird is incredibly omnivorous, and the composition of its diet is very diverse. If there is a problem with fish, this gull is capable of long maneuverable flight, swimming and deep diving for prey: it calmly feeds on rodents, eggs and chicks of birds, grasshoppers, leftovers of human food and in tourist camps. It can easily eat some of the muskrat’s offspring. There are even known cases of cannibalism.

Thirdly, they live in places with sufficient number of fish and muskrats for successful fishing, therefore hunters and fishermen do not consider these competitors and do not kill them as cruelly as they kill cormorants.

On top of that, it has been proved that adult herring gulls on Baikal return to their nesting sites, unless the situation forces them to move. More than 90% of young birds also nest in their birth places.

It is still unknown why the seagulls lost connection with their homeland. But there is an interesting record made by Ivan Chersky: he did not see any nesting gulls on the cliff during his travel in 1879 and his excursion to the Goloustnaya River in 1878. But there were plenty of gulls there back in fifties, as evidenced by the geographer and naturalist G.I. Radde.

Probably, the story is repeating itself. Maybe some time will pass and the seagulls will return to the Chayachiy Cliff…