As soon as the conversation drifts to the animals living in the Baikal region, at first, people recall sable and ringed seal. These are followed by proud predators such as lynxes and graceful herbivores such as musk deer. Why should one remember about an ordinary hare - the animal with the nickname “squint-eye” that is considered a coward? Only fairy tales and nursery rhymes tell about hares. Thus the popularity of the hare as if excludes it from the category of interesting animals. It might seem that one could hardly learn new and entertaining things about the hare. Nevertheless, the animal is interesting and quite worthy of attention. There are several species of hares in Russia: variable hare, brown hare and tolai hare. The first two species are especially widespread in Siberia.

Variable hare (also known as polar hare, in Russian its name sound like “the white one”) got its name thanks to the snow-white winter fur. Only the tips of its ears remain black all year round. Brown hares also have a lighter fur in winter in some northern regions, although they are never snow-white.

In the south and west of Lake Baikal, hares are the most common animals; they live in rather large families and often help each other out. It is generally believed that hares are nocturnal animals that do their best to stay in their burrows in the daylight. But Baikal brown hares are also active during the day: they jump through the forest in search of food. And they eat a lot of things: herbs and flowers, fruits and roots. In winter, hares gnaw at the bark of trees and bushes. 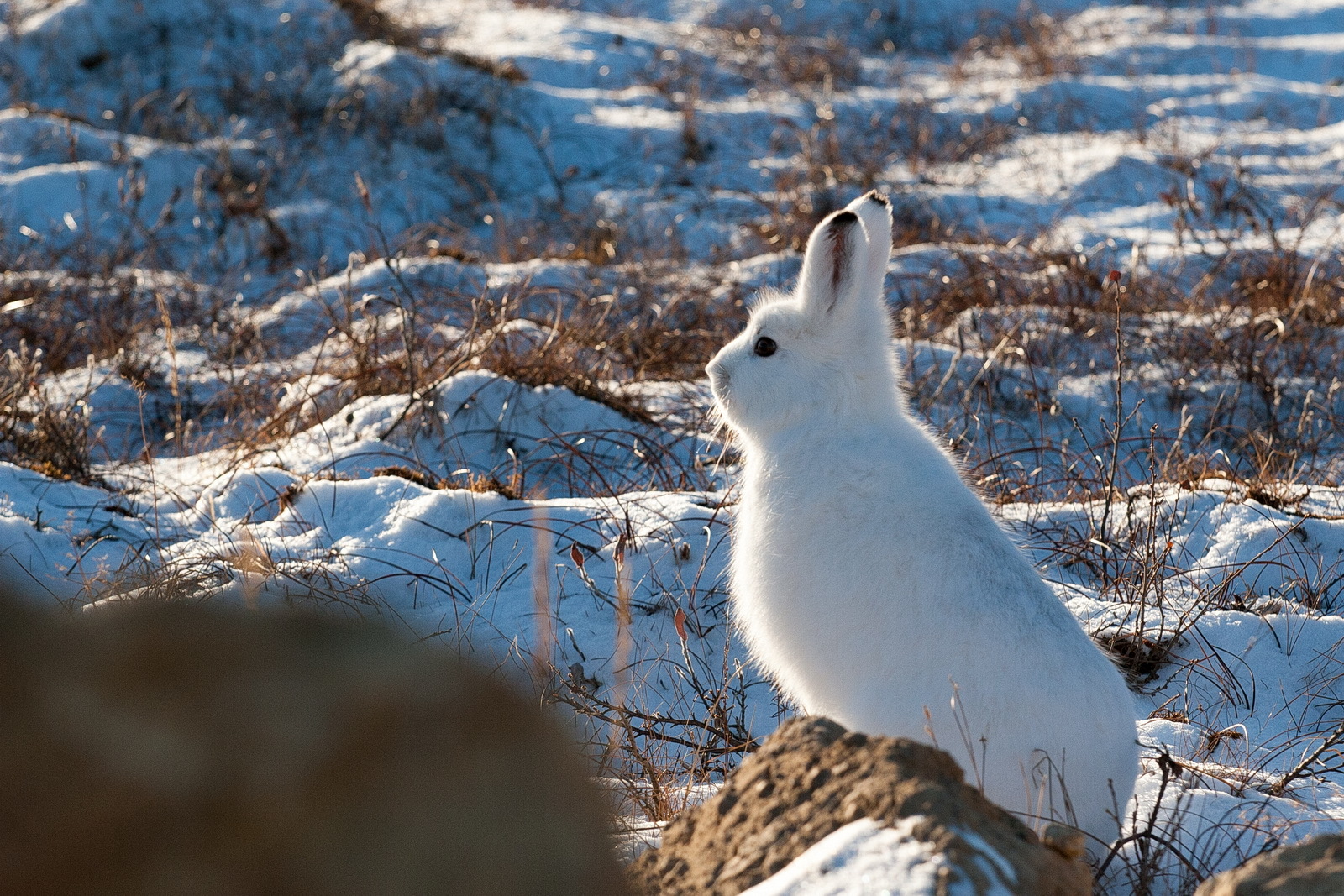 Variable hares are usually quite large. The length of the animal’s body can reach half a meter, for separate individuals - up to 70 cm. Its weight is about two kilograms. Very large hares also live next to the Baikal ones: in Western Siberia they can even weigh 5.5 kg. The ears of the hare have become proverbial; thanks to them, the most common nickname of the hare is “long-eared”. The ears’ length sometimes reaches 10 cm! Another distinctive feature of the hare is the fact that its feet are covered with thick coarse hair protecting them from cold snow and prickly grass.

has the fame of a coward: the animal has too many enemies. It defends itself against them in a very special way – by fouling the trail. Each hare is a skilled master of this complicated art. In order not to lead the enemy to its burrow, the hare makes complex loops, crossing its own tracks, forming double chains, which at some point makes the direction of the animal’s movement incomprehensible. In order to break the trail and finally “disappear”, the hare usually makes a long and sharp leap aside.

By the way, the Russian word meaning “hare” (“zayats”) was derived from the Slavic word “zay” meaning “a jumper”.

According to the peculiarities of position of the hare’s footprints, an experienced hunter can find out what the hare was doing: calmly looking for food or running somewhere. When feeding, the animal first touches the ground (snow) with its front legs and then pulls its hind legs forward. Thus, the small prints from the front legs are located in front, and the large prints of the hind legs are located in the back. When the animal quickly runs, the tracks look exactly the opposite way, since the hare throws its hind legs far forward, pushing itself from the ground in powerful jumps. An average speed of a hare running away from the chase reaches about 60 km/h.

Hares are really prolific. A female hare brings three to four litters per year, up to six young hares each. Newborn variable hares are covered with thick fluffy fur. Unlike the majority other animals, they are born sighted. At the same time, the hare’s vision and sense of smell are poorly developed. But the hearing ability is quite sharp, just like the ability to quickly move around, which is manifested by newborn hares in the first minutes of their life.

During the first week after their birth, newborn hares feed only on mother's milk, but already on the eighth or ninth day they begin to pinch grass on their own, and after the second week of their life they become independent – already at the age of 15 days!  By the age of ten months each of them is already a fully grown hare that begins to propagate.

Thanks to such fertility, the number of hares’ population is stable, despite the fact that their enemies include not only numerous predators, but also humans. The hare is a game animal, although its fur is not valued as highly as that of the sable. All the same, the hare is a desired prey of any hunter: soft warm fur, tasty meat and a special hunting enthusiasm, because it is not so easy to track the hare down due to the animal’s lightning-swift reaction.