Kachug - the Home of the First People

We continue to acquaint you with the outstanding villages of Lake Baikal. This article will be dedicated to the village of Kachug. This place was inhabited by people many thousands of years ago. “Key to Baikal” will tell you about the traces left here by the ancient people and why it is better to come here in September.

The urban-type settlement of Kachug was founded by Russian explorers in 1686, and its name is derived from the Evenki “kocho” - a bend, a river bend, a cape. It is true that the Lena River passing through the village makes a bend in this place, turning from the west to the north. The name of the river is also of Evenki origin - Eluene (“Big River”), in Russian it was transformed into “Lena”.

Lena originates in the mountains only 10 kilometers away from Lake Baikal. Kachug is located farther from the lake, 115 kilometers away, and navigation on this great Siberian river begins in this village.

The main attraction making Kachug worth visiting – Shishkin petroglyphs – are also situated along Lena River. An enormous (about 2 km) monument of world culture was discovered during the Great Northern Expeditions of the 18th century.

The monument is a rocky massif stretching along the Lena River, covered with paintings of ancient people (also known as petroglyphs). The artists of the past depicted everything they saw: their fellow tribesmen, animals, nature, various scenes from their lives, as well as various symbols and signs that are not completely clear at first glance. The petroglyphs include the images of people with tails and animal heads, as well as entire pictures with a large number of characters.

Petroglyphs gained global fame only in the middle of the 20th century, after the publication of the most part of materials by academician A.P. Okladnikov. Already at the end of last century, 1762 images on 298 rock mass planes were scanned with the use of new scientific technologies.

According to local beliefs, the petroglyphs are protected by a deity called Khara-Azhirai - the Master of the great Siberian river. Its enormous head in a combat helmet is hanging above the central part of the ancient monument. Some time ago, a traveler passing through this place was obliged to appease the formidable spirit by offering a sacrifice.

The oldest paintings date back to the late Neolithic period (IV millennium BC): these are large figures of animals - deer, moose, wild boars. Only a few of these paintings survived.

The next group of petroglyphs is represented by the paintings related to the Bronze Age (III – early I millennia BC): these are the images of Baikal ringed seals, bears, deer, bulls, strange mythical animals. Some of them are colored with burgundy ocher - thus they can be easily recognized.

There are very few paintings of the Iron Age period (I millennium BC). These are mainly the images of deer and moose.

The images of the era of the early Middle Ages (I millennium BC) are the most numerous, made with the use of the wiping technique: horses, wild boars, moose, camels, birds, people in short and long clothes.

The paintings of the late Middle Ages (the first half of II millennium AD) are performed with thin scratching lines and light wiping, these are the images of wild animals, horsemen, signs, dwellings, trees, and even domestic camels uncharacteristic of that area.

The latest paintings, dated by the 17th-19th centuries, depict churches, Christian crosses, ships, which is clearly associated with the arrival of Russian explorers.

It is better to look at the paintings of ancient and other people with your own eyes as a part of an excursion group. The guide will show you the most interesting places of the giant monument and explain the origin of unusual paintings.

Unfortunately, the works of the so-called modern “artists” can also be seen there: you can find such inscriptions as “Tolya was there” or “Tagil 2015”. However, the monument is protected, and such vandalism is less common now.

The Lands of Ancestors 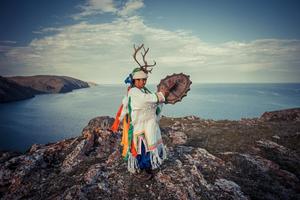 One of the petroglyphs - a horseman with a banner - is now a symbol of the Republic of Sakha (Yakutia). It is no accident: there is a belief that the ancestors of the Yakuts - Kurykans  - lived in the area of ​​Kachug and to the south of it.

It is assumed that some of the Kurykans remained there, merged with the Mongol tribes, and gave birth to the Buryats. Another part of Kurykans went down the Lena River and acquired their homeland in the Tuimaada valley where modern Yakutsk is located.

What were the reasons for this migration? Perhaps, this was due to the arrival of the Mongols, but there is no clarity in this issue. The last wave of migration of the ancestors of the Yakuts occurred in XIV - XV centuries, when the Mongol empire was already disintegrated.

Now the area of Kachug is inhabited by Buryats, Russians and Evenks. These peoples came here a very long time ago, but they all seem to be like guests here, taking into account the age of local petroglyphs.

Kachugsky district is the birthplace of two prominent people: a remarkable historian, ethnographer and anthropologist Afanasii Shchapov and Innocent, Metropolitan of Moscow and Kolomensk (Veniaminov) were born in the village of Anga, 10 kilometers away from Kachug. A cultural center was even built in honor of the Metropolitan: it is worth visiting. Innocent is considered one of the founders of Blagoveshchensk, the creator of the Aleut alphabet and researcher of Russian America and the Far East.

They also extract pine nuts in Kachug! These are listed among the best pine nuts in Siberia. So, if you come here in September, there is a chance to enjoy the useful gifts of the taiga and buy them for future use at a low price.

You can get to Kachug by public or private transport from Irkutsk. A travel takes about three hours.

Although Kachug is not spoiled by the tourists’ interest, it is easy to find a place to stay overnight there.