Evenki living in Transbaikalia and Amur Region call themselves “Orochons” and have the most serious and multi-layered cult of the bear. It is believed that every Orochon hunter is allowed to kill a strictly defined number of bears that cannot be exceeded. If this happened, the hunter would forfeit his life. Hence the sacred mystical awe of the Evenks before the Master of the Taiga. In this respect, the story of the Evenki hunter Aleksandr Erdyneevich Stepanov is indicative; it was recorded during one of the ethnographic expeditions:

“If you catch a bear, you have to apologize. You should say that you are sorry, but you just needed some fat or something else. Indeed, the fat is curative. Earlier Evenks used to hunt bears for the sake of fat, they didn’t eat so much meat, only took fat and bile. Of course, before they killed the animal, they prayed and sprinkled some vodka or milk. They asked for permission of the burkhan (spirit), saying: “Nandikan, allow us to take the bear, not the Master himself, but an ordinary bear”. After they killed the bear, they dressed his body; they had to say that they were not really dressing the body, only ants were tickling the bear. When they finished and took everything they needed and buried the meat, then they had to put a branch in the dead animal’s mouth, tie it up, then place the head on a tree, so that the animal’s spirit would not chase them”.

The rite of the Orochons connected with the head of the killed bear is full of deep pagan symbolism: Evenks believe that the soul of the killed bear does not die, but remains in the forest for some time, after which it moves to another bear, and thus the delicate natural balance is not violated.

Evenks believe that the soul of the killed bear does not die, but remains in the forest for some time, after which it moves to another bear, and thus the delicate natural balance is not violated.

The attitude of Buryats to the bear is also interesting. Buryat language has two ways of designating a bear: babagai and guroohen. The first word is a combination of words - baabai (father, ancestor, forefather) and abgai (elder sister, elder brother’s wife, elder brother). It is known that when Buryats were talking about a bear or were just mentioning the animal in a conversation, they often gave it family names: a mighty uncle dressed in a fur-coat; a grandfather in a fur-coat; a mother or a father... By the way, the word babagai is a general definition of all living and deceased older relatives. So it is very symbolic that the bear is called exactly in the same way.

A similar respectful names and perception of the bear as a close relative is characteristic not only of Buryats. For example, Khakasses called the bear aba, ada, aga, apchakh, abai, which also meant a father, a mother, an elder brother, ab uncle and other terms denoting close relations.

The second name of the bear in the Buryat language is guroohen. This is already a more “zoological” word. Depending on the species, the bear was called khara guroohen (a brown or black bear) or sagaan guroohen (a polar bear). Probably, this bear’s name was derived from the general term “an guurol” meaning “wild animals”.

For a long time people have tried to explain the origin of the bear through the stories with the main idea of a miraculous or magical transformation. For example, Buryat folklore has two most common options: shapeshifting that occurs at the will a person and spontaneous or violent shapeshifting that does not depend on the will of a person.

One of the most famous fairy-tale stories tells about a werebear hunter who was forced to always remain in an animal form due to the envy and hostility of others. This bear man steals a woman, and this couple becomes the progenitors of all bears. There are also common myths telling that the origin of the bear was closely connected with the will of the god (burkhan) punishing people for any serious or small misconduct, turning them into animals. Interestingly, an example of such misconduct is a person’s desire to laugh at others. Some more popular “reasons” for punishment were also greed and cruelty. At the same time, returning to the human form was possible in the way usual for fairy tales: through love and acceptance. A werebear from the “Baabgai-khun” (“Bear Man”) folk fairy tale regained its human appearance after meeting his wife. However, as he comes back to the taiga, he always turned into a bear.

Buryat shamans considered the bear itself to be a shaman, morover, the strongest shaman of all. Buryat language has the following expression: “Khara guroohen boodoo elyuutei”, which translates as “The bear is higher that the flight of the shaman”. 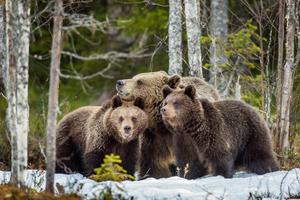 Bear Fostering: a Brown She-bear and Her Offspring

Buryat shamans often used fir bark in their practices; the bark had to be taken from a tree scratched by a bear. Such trees were usually called “baabgain ongolhon modon” – “a tree consecrated by the bear”.

The Buryat folk calendar contains direct associations and similarities connected with the image of the bear. For example, one of the winter months in the calendar of the Khori Buryats is called “Burgan” and an “ekhe Burgan”, which literally means “a big male bear” in the Alar dialect.

One more evidence of the sacredness of the bear’s image in the traditional culture of Buryats is the oath with the use of the bear’s skin. Such an oath is usually given alongside with eating or biting a piece of the bear's skin and is considered the most binding and having the most terrible consequences.

Besides, since ancient times, the bear has been one of the most popular characters of folk games of Buryats. A description of the bear games is found in the notes of travelers who visited Buryat uluses. For example, A. Potanina wrote about this folk leisure: “Here people try to correctly imitate all the movements of this powerful animal as strongly as possible. The person who imitates a bear shows the animal’s strong jaws and teeth. That person tries to take different things with the teeth and carry them to one place, thus the bear puts all people present at the game to that place. To keep the game going, everyone grabbed by the bear’s teeth should show no more signs of life and obey, no matter where the imaginary bear wants to put a person”.