Christmastide is a twelve-day holiday cycle lasting from the first Christmas star (January 6) to the blessing of the water at Epiphany (January 19). With the advent of Christianity to Russia, it turned out that the religious holiday coincided with the ancient pagan tradition - the days of the winter solstice. People were performing the rites and rejoiced that daylight hours were becoming longer and nature changed its course from winter to summer. It was believed that at this time pristine chaos reigned on the earth and the borders between the worlds were permeable: evil spirits and the dead were freely walking amidst the living.

When the world and nature are in a state of transition, it means that during the Christmas time people are also allowed to feel free from restrictions and have lots of fun - to take part in noisy promenades, risky games, dressings and evening parties. Young people began to prepare for the holiday almost six months in advance: the girls sewed outfits, and the guys made character costumes.

One of the reasons why everyone was looking forward to the Christmas days was the opportunity to tell fortunes. Of course, the church did not approve of sorcery, but this did not stop people. They told fortunes on the evenings during the entire Christmastide, but the results of the rites carried out on the eve of New Year, Christmas and Epiphany were considered the most accurate.

A Dark Corner, a Magic Circle and Loosened Braids.

On the evening of the appointed day, girls gathered together - they told fortune concerning their fiancés, good luck next year, about the chances of their wishes coming true. For fortune-telling, they chose a place where, according to common beliefs, an evil spirit dwelled: a bathhouse, a barn, a stable, an underground floor, or an abandoned house. In addition, the rite was performed on the border between the “human” world and the “alien” world: near the stove, at the doorway, near the fence, on the corner of a house, near the gate, at the intersections of roads. But that was not enough. To get in touch with evil spirits, they took off body crosses and talismans, untied the belts and knots on the clothes, the girls loosened their hair and remained dressed only in undershirts. However, they always outlined a circle around themselves with a poker, chalk or a candle-end. It was believed that the circle was the symbol of the sun, which means that it would protect a person from the dark forces.

Everything Was Like in a Zhukovsky’s Poem titled “Svetlana”:  Throwing a Shoe, White Snow and Christmas Carols 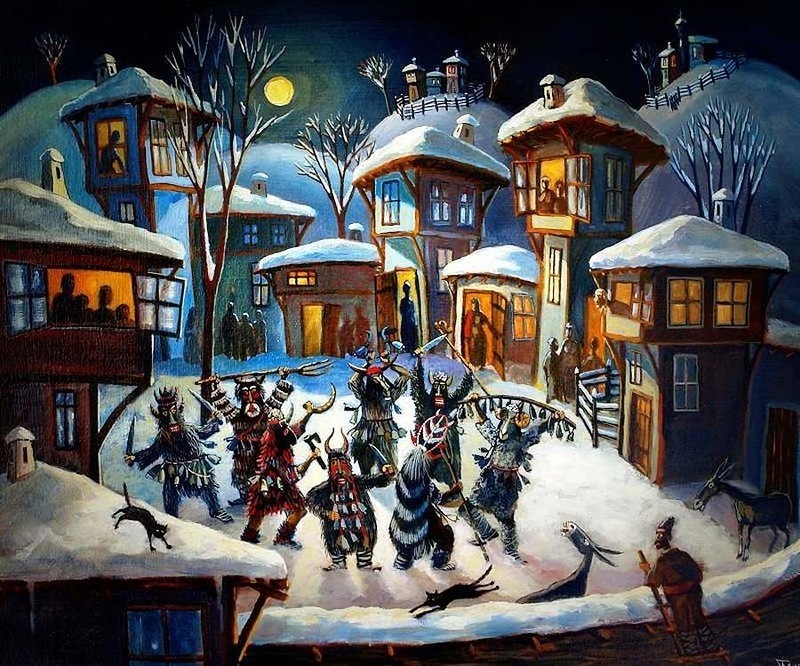 In Siberia, fortune-telling started with Christmas carols. They put a plate on a table covered with a white tablecloth. Maidens put their jewelry in it, after which they covered it with a scarf. Then they chose a “presenter”. While the girls were singing, the presenter shook the plate and pulled one thing at a time out of it. The song that sounded at that moment predicted the fate of the owner of that piece of jewelry. When the last piece remained on the table, they sang the wedding song “My Dear Guest”.

Around midnight, the participants of the rite went out into the courtyard “to search in the snow”. They put the snow in their aprons, swayed it, saying: “I search, I search in the white snow. Where the dog barks, there my betrothed is. ” Thick and hoarse barking predicted an old man as a husband; thin and ringing sound meant a young and strong husband. Another traditional way to tell fortune was to throw a felt boot out of the gate. It pointed where the maiden’s betrothed was.

To get the answer from the fate telling that your fiancé was waiting for you was good, but to see  him  with one’s own eyes was even more accurate. To accomplish this, Siberian girls brought a mug of “silent” water from an ice hole (without saying a single word), putting splinters on it in the form of a well parapet and left the mug it фе the head of the bed. After saying the words: “My dear betrothed, please come to me all dressed up, and give water to the horses”, the girl went to bed, and a bridegroom should appear before her in a prophetic dream.

To predict the temper of her future husband, a girl went to the bathhouse at midnight. Wrapping the hem around her head and backing away from the entrance, she said: “If you are a rich man, touch me with a woolly hand”. If a woolly hand touched her body, the groom would be wealthy, if the hand was hairless and stiff - he would be poor and angry, soft hand meant that a husband would have a sweet temper.

However, some women were interested in telling fortunes about other things, not only bridegrooms. For example, old women asked spirits about their death, for this prophecies they used spoons: they poured water into these and exposed them to frost. If the water froze with a hillock, this meant life, and a hollow in the ice meant death.

To See or to Die

The most part of fortune-telling rites were considered simple and safe, but the girls rarely resorted to the main ones and took them very seriously, believing that these involved direct contact with otherworldly forces. One of these fortune-telling traditions involved using mirrors, where an evil spirit took on the appearance of the girl’s future fiancé. To do this, the girl was left alone in the room, and if she was too afraid, a nanny or a friend sat in the next room. She put two mirrors opposite to each other and two candles on the table. She outlined a circle around herself with the splinter that was used to light up the fire on the Christmas Eve, and then she gazed intently into one of the mirrors. At first it was covered with fog, then it cleared up, and her future husband looked over the girl's shoulder. At this moment, she said “Enough! Keep away from me!” During the fortune-telling it was prohibited to look back, otherwise troubles would certainly follow.

They also invited their betrothed ones to have a supper. They laid a new tablecloth on the table, put tableware for two people, bread, and salt. Around midnight, the girl sat down at the table and said: “My dear betrothed, come to have supper with me”. The signs of the appearing spirit could be sudden gusts of wind outside the window or a knocking sound, sometimes a smell of sulfur. As soon as the midnight came, the groom had to appear in the same outfit which he would wear at the betrothal. When he sat down at the table, the girl asked his name and then said: “Keep away from my place and from my mystery”.

In her book titled “Notes and Comments on Siberia”, the writer Ekaterina Avdeeva-Polevaya recalls: “I experienced a lot of things on purpose, but I never saw anything. On the contrary, I heard about miracles from other girls, and they assured that what they said was true. Once, three girls agreed to go fortune-telling to an ice hole. They took bovine skin, outlined a circle around themselves and sat down in a proper way. Suddenly they heard someone pulling their skin into the water. Girls shouted: “Keep away from us! Enough!” However, all was in vain. They ran home, but someone chased them, shouting: “Kopylikha (“Sled girl” in Russian), wait! Obvarikha (“Scalded girl” in Russian), wait! Noble lady, wait!” They prayed and had a hard time running home, and then they closed the gate behind them. But what happened next? During the following year, one of the girls was scalded with boiling water and died, the second girl fell down and hurt herself to death on a sled, and the third one married a nobleman”.

On the eve of Epiphany, all the mischievous tricks ended. Siberians went to church to get holy water, sprinkled it over a hut, a courtyard, and cattle. In addition, chalk crosses were put on the shutters and in the doorways. Locals believed that this would help to drive the devils and all evil spirits out of the house. People crossed themselves, drank holy water, said prayers. This meant that Epiphany Day had come.