This Animal is a “Foreigner” in Siberia: How Did Muskrat Come Up at Lake Baikal?

We continue to familiarize you with the interesting animals of Baikal: this time we will introduce you to a skilled architect, muskrat. This animal likes the night and preserves water reservoirs, besides, it came to live on Lake on Baikal by mere chance...

The native land of the muskrat is North America, but in the twentieth century it began to actively “travel” around Europe with the help of people; then in the late 1920s it came to Russia and began to live in a large number of our water reservoirs...

How Muskrat Appeared on the Coast of Baikal

This species of rodents began to “conquer” Eastern Siberia in 1932 in three places at once: in the valleys of the rivers of Verkhnyaya Angara, Irkut and Vitim; a total of about 578 animals were brought there. In 1934 the muskrat was settled on the banks of the Selenga River, and in 1935 the animals were brought to the territory of the modern Irkutsk Oblast. In 1936 the new animal was brought to our Lake Baikal: to the Selenga delta, the lake’s eastern (Barguzin valley) and north-western (Dukhovoe Lake and Kotokel Lake) coast. After that, these animals were released to the region several more times.

The rapid colonization of our water reservoirs was not accidental. Muskrats are trying to choose places with a large supply of vegetation and clean fresh water: there are plenty of those on Lake Baikal.

Today one can observe the life of the muskrats in the bays of the Maloye More, Posolsky, ​​Barguzinsky, Chivyrkuysky bays, in large and small coastal lakes... 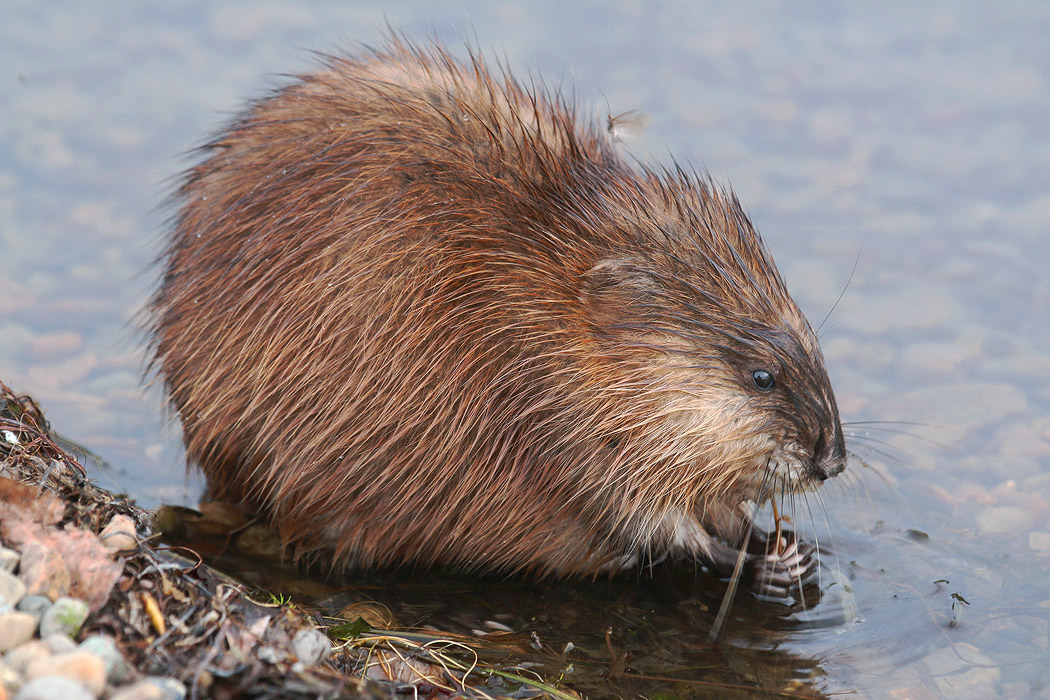 The animal is rather funny; the muskrat is called so because of the glands in the groin region producing special secretion (a substance with a strong smell).

At first glance, the muskrat resembles a large rodent, but it is special a rodent: the structure of its body has many things in common with the river beaver. However, in terms of body size, the muskrat is surely much smaller – its length reaches up to 36 centimeters with an average weight of 900 to 1500 grams.

The ears of the animal are small, external ears are in fact almost invisible, but despite this fact, their owner has the excellent hearing ability.

Their eyes are high positioned, and the sight and sense of smell are not particularly acute.

Nature endowed muskrats with the ability to efficiently replenish their energy. The animal can eat underwater without opening its mouth, due to the fact that the anterior teeth pass right through its lips.

The ability to live both on land and in water resulted in the presence of several small membranes on the muskrat’s feet, which helps the animal to swim perfectly well and quickly move in the water.

A very interesting part of the muskrat’s body is the long tail, according to some data, its length reaches up to 80% of the entire muskrat’s body. There is no fur on it; instead, there are scaly plates with sparse patches of separate hairs. This tail makes it possible to distinguish the muskrat from all other animals. Its shape is flat, strongly compressed from the sides. The tail is extremely important for quick movement in the water because it functions as a kind of “steering wheel”.

The muskrat does not freeze in the cold water of Baikal and its rivers. Its brown fur, which is lighter on the belly, is very thick and waterproof because it is supplemented by stiff and soft undercoat.

The muskrat can rightfully be called a skilled architect. To construct its dwelling, it either digs holes in the marshy lowlands or on the islets or builds huts on some solid basis (for example, a hummock) – these constructions can be even a meter high (sometimes higher).

The muskrat is extremely forward-looking in the matters of construction. Firstly, it can construct a two-story dwelling, taking into account the rise in the water level. Secondly, the entrance and exit of the “house” is located under the water and is invisible from the outside.

A hut made of reeds, sedge, stems of other aquatic plants is shaped like a small sheaf, with a diameter reaching from 60 to 180 centimeters. The animal plunges into the water, then ascends to the “room” that is already located on the surface. The room’s diameter is 25-35 centimeters. There are cases when muskrats build utility rooms: for storage of supplies for the winter.

Muskrat is characterized by a semi-aquatic way of life; their main activity is associated with the dark time of day, as well as dusk and early morning. The animal prefers to spend the afternoon in its shelter, largely due to the fact that can be a hunter by the majority of predators that are larger than muskrats. However, the muskrat is extremely useful for water reservoirs. First and foremost, this is connected with the adjustment of oxygen balance. It is the muskrat that makes holes in the ice, and in the summer it eats stiff plants: in fact, this protects the fish from the lack of oxygen.

A big part of the muskrat’s life passes in a water reservoir: it can swim perfectly well, as well as stay under water for a long time, up to 17 minutes.

Now, let us remember that the muskrat is a native of North America that is not characterized by such long and severe winters. The ice on the water surface in the Baikal region can persist for up to 6-7 months. Therefore, the muskrat has to survive not just in the water, but under a layer of ice. The animal gets to the surface in case of a catastrophic shortage of food, but a muskrat cannot survive in the snow for a long time: this kills the animal.

What Do Muskrats Eat?

The diet of muskrats is based on the roots and greens of aquatic and coastal plants. These are cattail, sedge, horsetail, bulrush... But, for example, in warm Baikal small bays and litters, the animal can also add mollusks and invertebrates to its diet. In general, the life in the Baikal region inevitable taught the muskrats to eat the food of animal origin: they are forced to obtain it under the conditions of freezing water reservoirs. They have to catch small fish, as well as other fish. In winter, the fish that lives in the shallow bays of Lake Baikal approaches the muskrat, then the animal attacks it.

It is noteworthy that, according to scientists, the naturalization of muskrats on Lake Baikal is a very positive example of acclimatization of a new species of animals in an uncharacteristic environment.