The Spotted Master of Snowy Mountains

International Cat Day is celebrated on August 8. Of course, this holiday is dedicated to the cute domestic animals, but the snow leopard, also known as “ounce”, is a cat as well, although a very large one.

The ancient Turkic name of the predator was “irbis” (irbiz) that was also adopted by the Russian population, including Siberians. Today this word is used in Russian literature as a synonym for the snow leopard. The animal has always caused respect of the peoples living on the same territory; this unique creature has lived mainly in the highlands.

The snow leopard is a species listed in the Red Book. It is mysterious, understudied, and pretty vulnerable. All researchers of this rare animal are amazed at the fact how it not only manages to survive in the most difficult natural conditions, but also remains an unnoticed, almost mythical creature.

But You Will Find This Cat Only in the Mountains

The snow leopard resides among the rocky mountains, from the Himalayas to the East Sayan Mountains. The snow leopard living on this large territory is represented by only one genus and species; no subspecies have been identified yet.

The world’s northernmost snow leopards live in the Sayan Mountains. Nobody can tell the accurate number of animal population living there. Firstly, it is literally an entire mountainous country with about 15 thousand square kilometers of mountain taiga potentially suitable as a habitat for the snow leopard. It is hard to trace the animals! Secondly, the snow leopard changes its location, moving along the Eastern Sayan Mountains, and going to the places where it had not been seen before.

Some authors argue that the snow leopard most likely lived in the East Sayan Mountains in ancient times. Some, on the contrary, notice that the fact of the existence of a snow leopard there has been recently brought into question due to the lack of recognized empirical material.

The history of the phenomenon is not completely clear, but the presence of the snow leopard in Tunkinskiye and Kitoyskiye bald mountains, on Munku-Sardyk, as well as adjacent sections of the mountain territory, cannot be denied today. They animal’s traces have also been found on the ridges of  Khamar-Daban, Dzun-Murinsky, Dzhidinsky, as well as on the coast of the southern part of Lake Baikal.

The Snow Leopard is Crazy Gorgeous 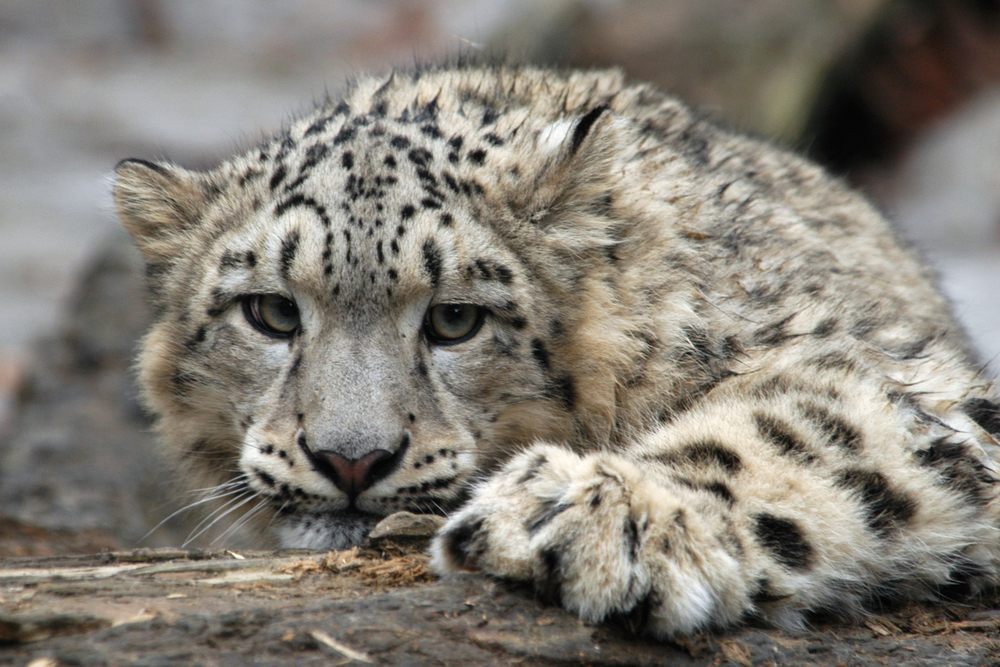 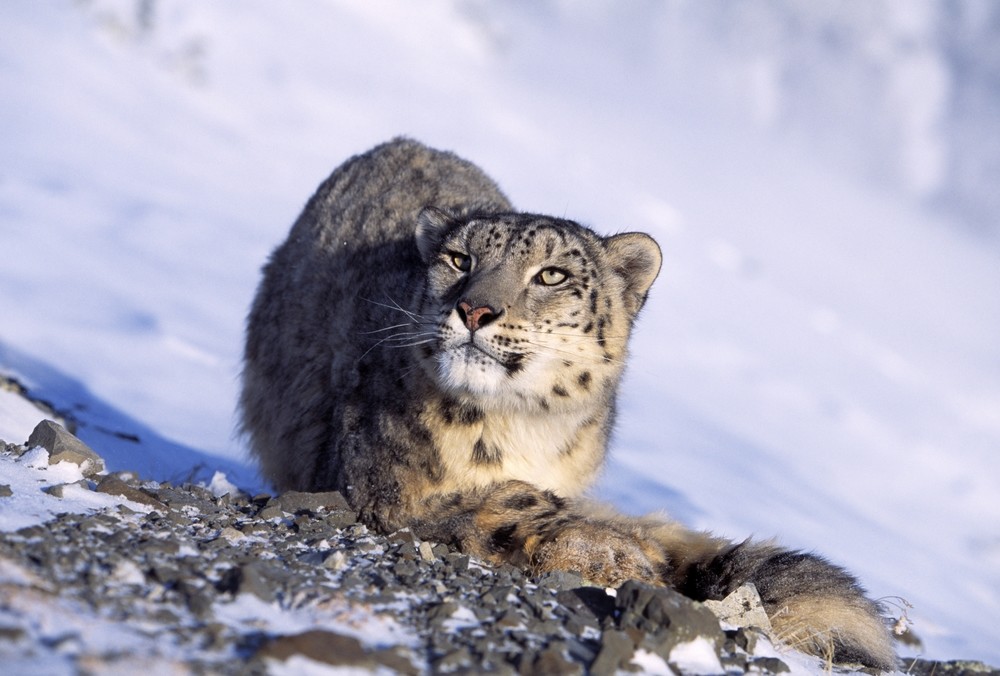 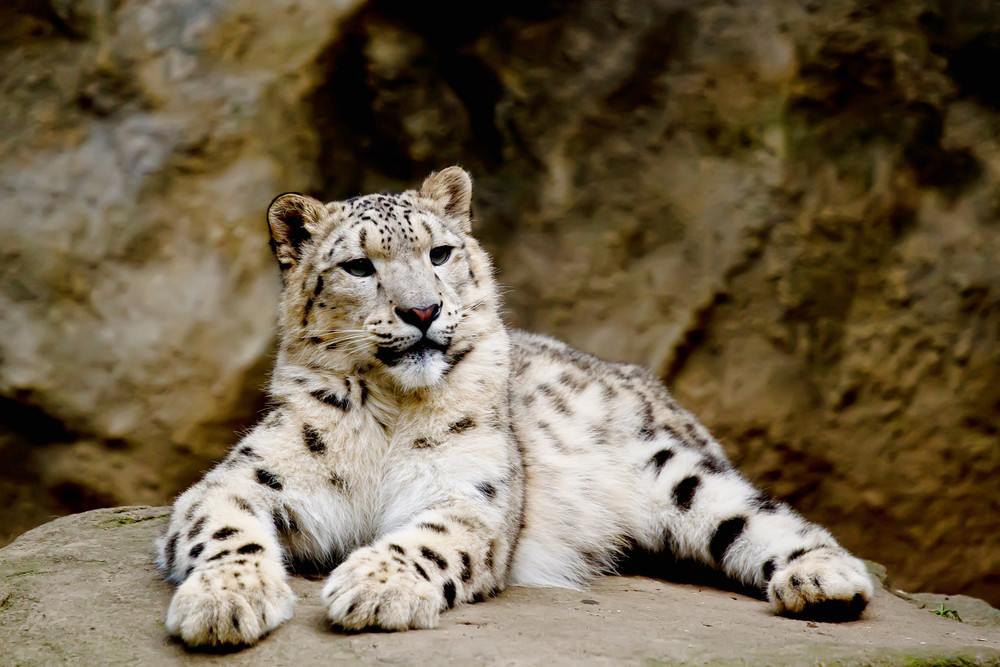 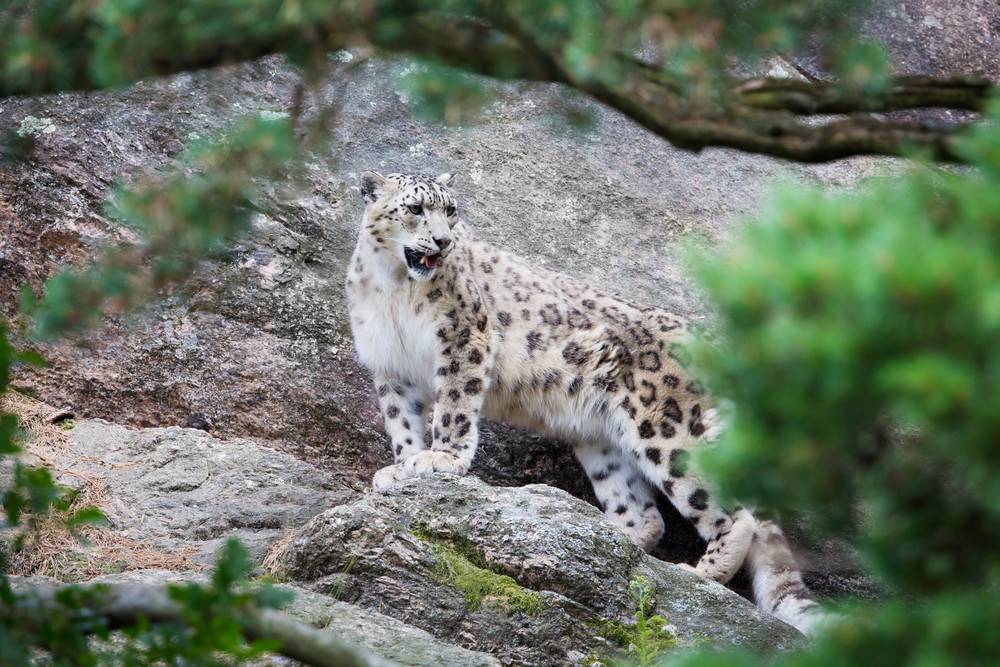 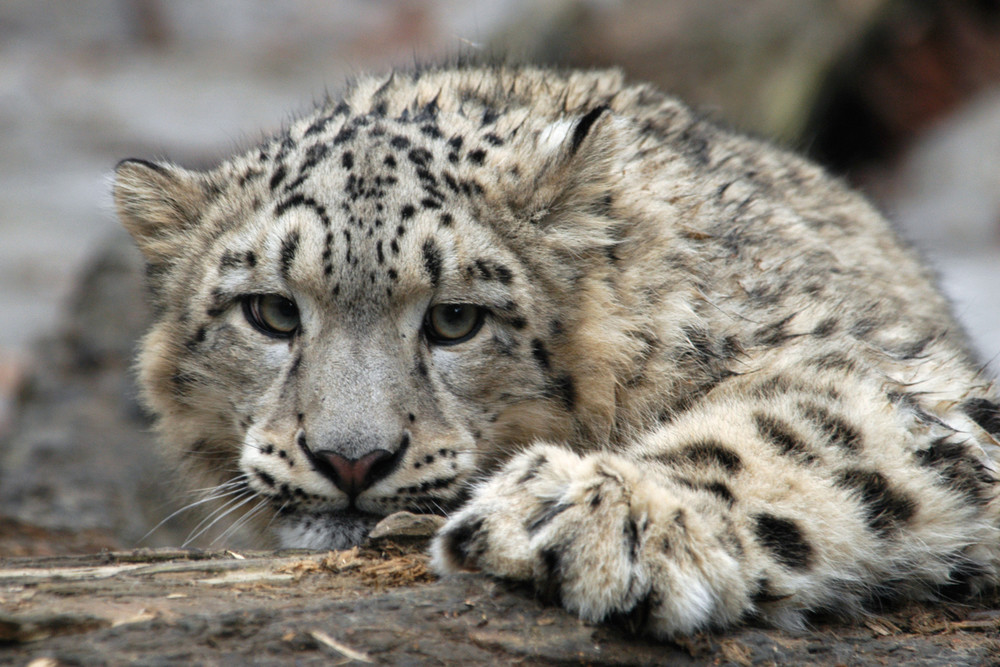 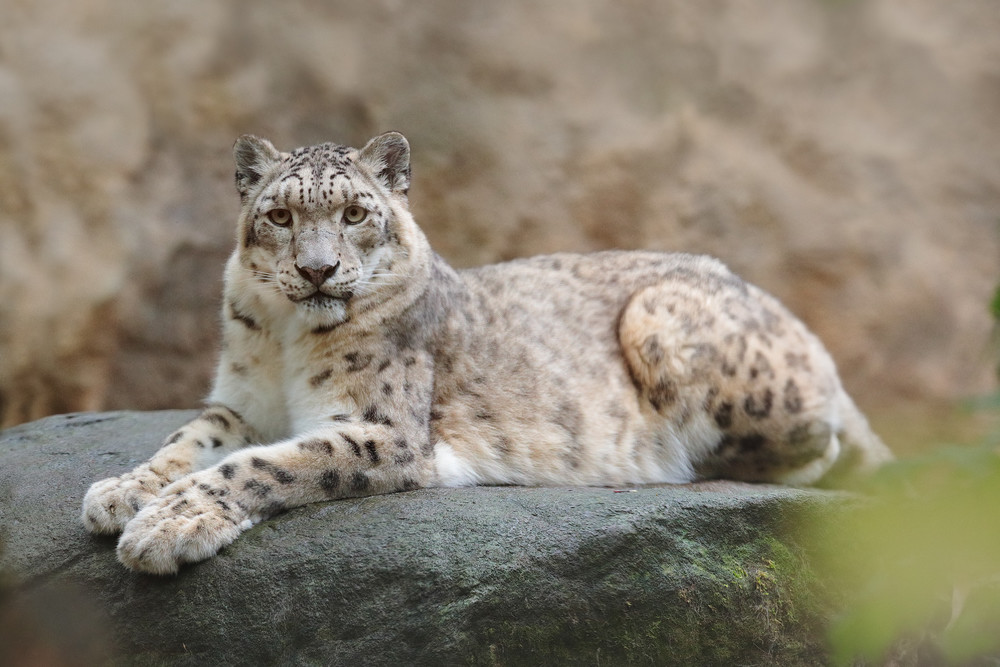 The size of the snow leopard is larger than that of the lynx. A leopard has a long (slightly longer than one meter), but squatty body, high and broad powerful legs, an elevated sacral part of the body, which is basically typical of ordinary small cats. The average weight of the animal reaches 60 kilograms.

Against the background of the body, the head is small, rounded, with a massive skull. The eyes are quite substantial, wide-set; whereas the ears are short, rounded, almost invisible in winter because they are “hidden” in the fur. The whiskers (vibrissae) are white and black, about 105 millimeters long.

One of the brightest distinctive features of the snow leopard is its tail with the length almost equaling the entire body length. The tail is covered with very long and thick, although loose hair, therefore it looks very thick and fluffy. The very tip of the tail is usually black on top.

The tail of the snow leopard is either bent upward in an arc with its tip pointing to the back, or it is strongly lowered and “drags” behind the owner, leaving a long strip of a trace in the snow as the animal goes forward.  The tail is not purely decorative. It is also a kind of a steering wheel that helps to perform artful big leaps during the hunt.

The snow leopard’s color also catches the eye: its fur is smoky gray, with ring-shaped dark spots – these are larger on the back (up to 8 centimeters in diameter), the spots are evenly distributed throughout the entire body. However, spots are situated rather sparsely, which is a clear distinction of the snow leopard from the leopard.

There are no gender differences in the fur color, but its color varies as the seasons change. Winter fur is very fluffy, silky, soft, with a pronounced smoky tint and blurred spots. Summer fur is characterized by light, almost white background, and the outlines of dark spots are sharp, almost black.

The Snow Leopard is Wary, Just Like Any Cat

The behavior of the snow leopard has been studied rather poorly, mainly due to the animals’ unique ability to lead a secluded lifestyle and literally “dissolve into thin air”. 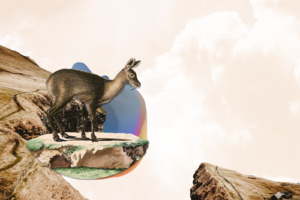 We know that snow leopards are single vagrants, but nature itself promotes their contacts with each other. In the majority of cases, the snow leopard “marks” its territory, but other individuals of the species may be seen at this place, which demonstrates some intragroup features in the lifestyle of snow leopards. Females live on the male’s territory, besides, scientists suggest that not only males, but also females can dominate.

The snow leopard is a very cautious, but vulnerable animal, which is compensated by high mobility, the ability to travel to long distances, and, consequently, the ability to maintain a full-scale communication within the community over a vast territory.

The snow leopard is a dangerous predator and an excellent “expert” in the field of survival under difficult conditions. The animal leads a dusk lifestyle, arranging its dwelling in caves or cracks among the rocks, where the animal hides during the day. The snow leopard prefers to hunt before sunset or at dawn. These animals are known to have two most common hunting techniques. The first one is used when the animal carefully creeps up to the prey from under cover, the second technique is waiting for a prey in a certain place. As the distance between the predator and the victim reduces to several tens of meters, the leopard makes a powerful leap to a distance of up to 7 meters. If it is impossible to catch its meal right at once, as a rule, the snow leopard will not chase the prey it missed.

The snow leopard’s main trophies are mountain ungulates: Siberian ibex goat, musk deer, roe deer... It can also hunt young boars, hares, even partridges. The snow leopard eats up to 4 kilograms of meat at once.

The animal is extremely poorly adapted to traveling on a high loose snow cover or snow crust. It tramples the loose snow, making trails, and then it constantly walks only on these trails.

In comparison with other large cats - tiger, panther, American leopard, the snow leopard has a different attitude to humans. Scientists don’t have any information about snow leopards eating or hunting humans. A snow leopard is able to kill a hunting dog, female leopards can also show aggression, protecting their kittens.

The best way to preserve and increase the population of the snow leopard in Baikal region is to avoid active interference with the animal’s life and to just let it survive on its own in a calm atmosphere.