Shamanka: the Rock That Revenges Itself upon Its offenders

Many names on Baikal are in tune with the shamans worshiped by people of this land – the Shaman Stone, Shaman Rock, Shamanka Cave ...

The mystical power of Olkhon is famous, almost all of its landscape elements have their own legends and traditions. However, the most mysterious place among them is the rock which was called simply Shaman Rock in ancient times, but today it is called “Shamanka” (“shamaness” in Russian).

Everyone who saw this twin-peaked miracle claims that its view is dazzling. The rock's base consists of white marble framed by red lichen, its western slope shows a brown glade resembling a dragon as if drawn by somebody, and there also is a tortuous Shaman Cave that pierces the base of the rock.

Why is the Rock Called Shamanka?

In olden days people believed that the rock was made of silver and gold, which could facilitate the needs of the islanders. However, ordinary people not could reach these treasures. An evil shamaness was guarding this untold wealth. She did not give anyone an opportunity to approach the rock, gpt she feared that the amount of treasure would decrease from people’s glances. And therefore she inflicted all kinds of calamities and hardships upon local residents. When the shamaness felt that a man was approaching, she immediately punished everyone – thunder roared, lightning flashed, rain poured in torrents, illnesses started to torture people ... And no one could defeat the shamaness.

How Warriors Fought against the Shamaness 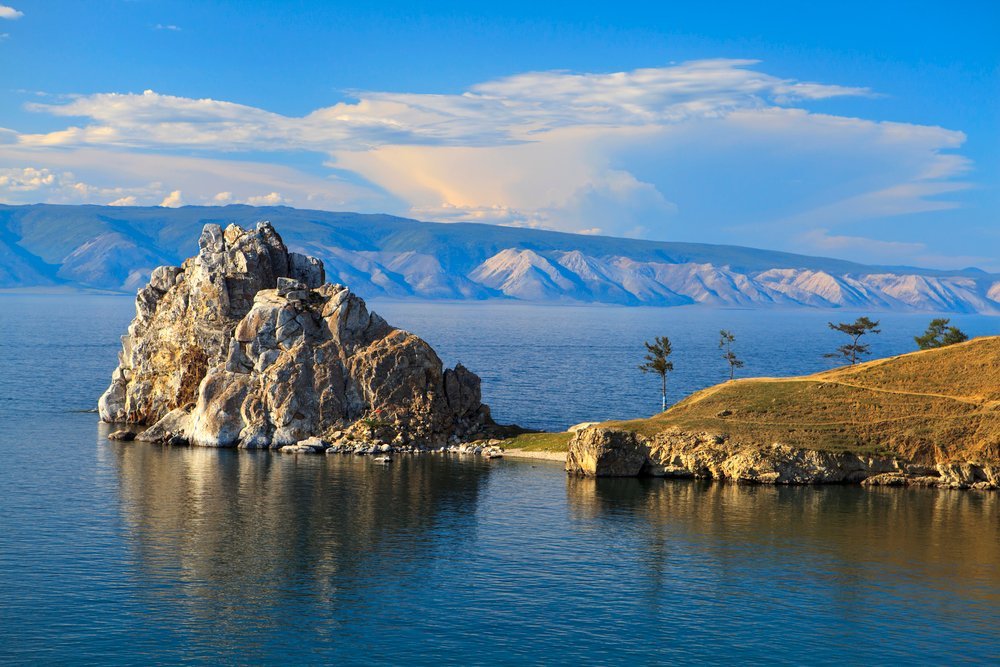 After all, people decided to get rid of the evil shamaness and called for the help of the most powerful and clever warriors and hunters. The warriors prepared a myriad of arrows, made bows from the strongest wood, and cast lots to find out who would be the first to fight.

The first warrior who confronted the shamaness was Khoridoi (the progenitor of the Khori Buryats in Buryat myths). He aimed at the evil woman and shot an arrow. The arrow hit the shamaness in a precise way. But Khoridoi was very surprised when the shamaness met him with that arrow in her hands! The old woman returned the arrow to the warrior and ordered him to never come back and not to waste his arrows on her. Khoridoi wanted to fight the shamaness for his own profit, which was why he caused no harm to her.

The warrior called Bulagat was the second to fight (Bulagat gave birth to one of the main Buryat tribes). He aimed at the head of the shamaness and shot. But his arrow also did not hurt the old woman. Bulagat decided to help people for the sake of fame, therefore his arrows were useless against the witch.

The third man who tried to defeat the shamaness was the hunter calked Ekhirit (the founder of one of the main Buryat tribes – Ekhirit Buryats). He had no equals in dexterity or in accuracy. He knew that his arrows would not overshoot the witch. The hunter shot, and the arrow pierced the chest of the old woman. The old witch was frightened and started to cry. Ekhirit was the first to touch the body of the shamaness, and she had to punish Ekhirit for this. The shamaness took Ekhirit’s arrow, broke it in half, and threw it so far that the wrecks of the arrow whistled in the air from morning until evening. Ekhirit was amazed at the power of the shamaness and proposed her to marry him. The old woman refused and disappeared into thin air. A hunter could not marry the woman whom he wanted to kill.

The End of Life of the Evil Shamaness

Nevertheless, the shamaness once again began to send dark forces to people, she created thunder and threw terrible lightning to the ground. But a simple hunter came out of the forest and saw the person who was the reason of all the troubles. The hunter took a bow and shot the shamaness right in her heart. The witch swayed and fell to the ground. An unknown hunter defeated the villainess because he shot an arrow with a good intention to save people from grief and suffering. All at once everything calmed down, the sun began to shine, the birds were singing, the grass turned green, the fish splashed in the rivers and lakes, and people began to live in peace and tranquility.

People began to use the treasures previously protected by the shamaness for the benefit of all; they buried the witch, and put a heavy stone, as large as the rock, on her grave, so that she could no longer be reborn on the Earth. And they wrote about her on that rock: the lines were saying that an evil shaman was buried there, that she had sent thunder and lightning to local lands. They also wrote about the hunter who saved the people from the cruel old woman.

Why the Rock Has Two Peaks 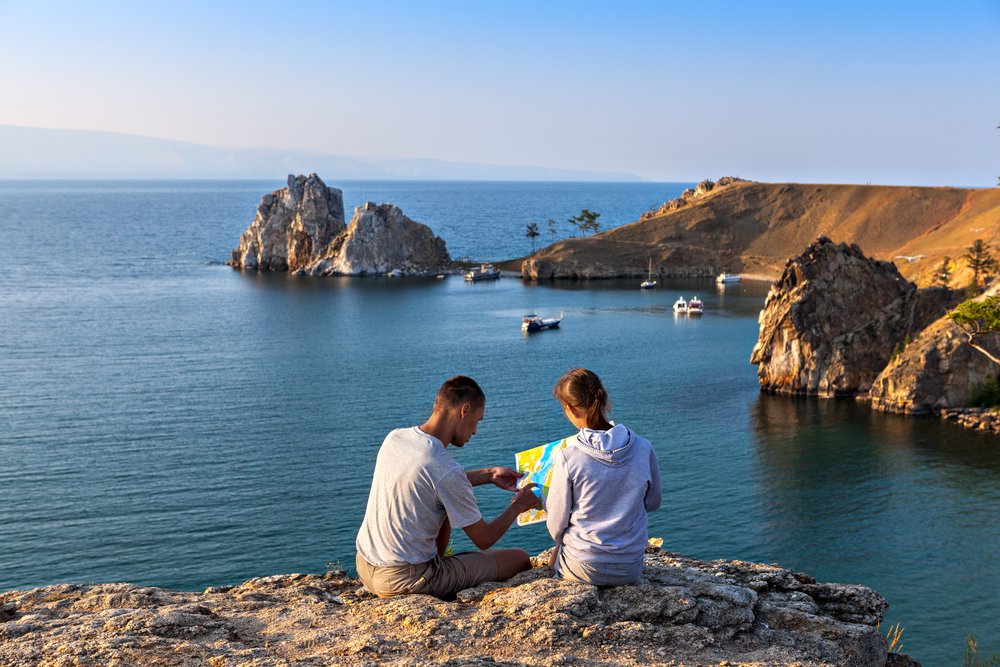 This question can be answered by the words of a legend, and it is a different story. According to the legend, an old shamaness had a daughter who fell in love with a guy and decided to marry her lover. But the shamaness did not like his daughter’s chosen one. An evil old woman chased him away. Then the lovers decided to kill her. For this purpose, they kicked the shamaness down to the ground and sat on top, so that she could not escape. But it was not so simple to defeat a powerful shamaness. As a result of the power of her magic, both lovers became petrified. Thus, it happened so that the Shamanka Rock consists of two parts. And these rocks are not completely straight; each peak has a slight slope. And this fact is explained by the following belief: in this way the peaks resist the mountain Baikal wind.

Locals worship this place where the Shamanka Rock was re-named as Burkhan Cape after the arrival of Buddhism on Olkhon. However, unfortunately, the same cannot be said about the tourists. Travelers visiting this place often behave in an extremely inappropriate way - they do not show respect for the sacred Lake, desecrate its coast by painting various inscriptions on the rock and throwing garbage everywhere. No wonder that this behavior enraged the Shamanka Rock, so it began to show her utmost discontent in an active way. As a result, the road leading to the rock turned into an extremely dangerous path: people, cars, livestock began to fall down from the height of 20–30 meters and die.