Mystical Baikal: Deities and Spirits of the Sea Lake

There is no better time than Halloween to remind about Baikal spirits. Here is about the cult of the eagle, the ancient traditions of the shamans and how to respect the lake keepers.

The ancient land of the Baikal region and the waters of Baikal are unique repositories of centuries-old cults of the indigenous population who worshiped the Lake as a great deity. The unruly nature of the Lake-Sea (LINK TO BURKHAN) did not make it possible to fully accept either Buddhism or Orthodoxy: it was protecting its pagan deities, its spirits, sacred spells of shamanism...

No one can say for sure when these shamanic idols and legends about them emerged. It is clear that we are telling the story about such remote past that we cannot rely upon any accuracy and consistency in the presentation of the blood relation between heavenly and earthly deities. Therefore, let us describe only the general picture of the shaman pantheon where Khukhe Munkhe Tengeri (Eternal Blue Sky) and Etugen (Mother Earth) are the leaders. 9 Sons of Heaven go after them. They are revered as the most ancient heavenly spirits, and are also considered the progenitors of all other spirits. Numerous Tengris finish the list of deities of the highest caste. They are responsible for natural phenomena, protection of human souls, patronage of tribes, clans, and crafts ... The next stage in the hierarchy is presented by the sons and grandchildren of the heavenly Tengri (Khats, Naoins), and finally, the Great Ezhins of various rivers, lakes, and Baikal territories , for example, Olkhon. Any natural phenomenon, any representative of the living world, even any object is guarded by its own spirit. Their number cannot be counted, but spirits are definitely present everywhere, and they determine the fate of a particular person.

Baikal region has long been the stronghold of traditional shamanism, and the Island of Olkhon has always been the generally recognized sacred place of the shamans of the northern world.

The native inhabitants of Baikal have a legend telling that the Lake is a living creature, the spirit of the Lake is Burkhan that inhabits the island of Olkhon and can turn into an eagle, and its indispensable assistants are Ezhins. Some old men said that the bald eagle was the son of the Master of the Olkhon Island dwelling on the Burkhan cape. Others said that the Master of Olkhon had no sons born from his wife, so he adopted three eagles who later became the ancestors of the Olkhon shamans.

Let's try to understand this.

One of the most common cults in Siberia, and, respectively, in the Baikal region, is considered that of the sacred eagle. Moreover, Olkhon that is called the symbolic capital of all eagles where the mythical Eagle King lives. It happened so that the Eagle was called the Great Father of Olkhon, the first shaman who shared his gift with humans for their protection against dark forces. Worshipping the bald eagle as the ancestor of shamans is characteristic of the culture of the Buryat people. According to the materials of the Buryat mythology, shamanism appeared at the same time as the world was created, and the first shaman was the son of a celestial god who descended to Earth in the form of an eagle and created a shaman there. However, when we try to find out the details about this fact, national legends show us many different versions. According to one legend, an eagle flying between heaven and earth got a shamanic gift from heaven. It was difficult for him to have this shamanic gift, so he had to go down to the Earth and give it to an Evenk woman. She, in turn, presented it to her Buryat husband. And this couple gave birth to all the next generations of shamans.

Here is another version of the same tale. There were only gods at the beginning. They created people whose happy life was burdened by diseases and deaths sent by evil spirits. And then the gods sent the shaman-eagle to support people. Unfortunately, people did not understand anything, and the eagle who returned to the gods was instructed to give the shamanic gift to the first person he met. Coming down to Earth, the eagle saw a woman sleeping under a tree, then they had a common son who later become the “first shaman.”

Finally, there is the following version. As a result of intimate relations with the eagle, a woman saw the spirits and became the first shaman herself.

Therefore, eagles are still revered as deities who have descended from heaven; ancestral and personal gifts and sacrifices are presented to these birds. 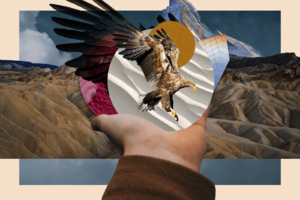 A common tradition among the Buryats was bowing to all eagle nests they saw, eagle feathers became shamans’ obligatory attributes that helped them to travel to other worlds, the pictures of eagles decorated the details of the Buryat traditional clothes. If an eagle coming at the camping ground grabbed an awkward animal, no one should be angry with the bird. But if a man killed, or even wounded an eagle, then this criminal was doomed to inevitable death.

The mythology of Buryats animates everything: animals, birds, forests, rivers, trees, stones ... Their Ezhins must be appeased, fed, treated. Otherwise, people will have to deal with disfavor, troubles, diseases. The spirits cruelly revenge humans for their disrespectful attitude and are kind to those who show respect and reverence. By the way, the oldest tradition of the Buryat people remains inviolable until our days:  paying respect to local spirits led by Burkhan. That is why the coast of Baikal and the steppes around it are filled with sacrificial sites where people ask spirits to send them good catch, a smooth path, sunny days, family health, protection from misfortunes...A place for these offerings to the spirits is called “Barisa". The spirits of the dead shamans appear and the local Ezhins reside at such places.

Therefore, all visitors to the holy places of Baikal should know that this land welcomes and accepts only those who believe in the power of Burkhan, care for Baikal, respect local traditions and come to the Great Lake with pure thoughts. A stele depicting the powerful Master of Olkhon and his sons – bald eagles – serves to remind people who are going to visit Olkhon about the above-mentioned traditions.