The 135th anniversary of opening of the building attracting many visitors is celebrated on October 6: nowadays the building houses the history department of the Irkutsk Museum of Regional Studies.
Первый Байкальский

Lake Baikal, local nature and the fauna of its coast, culture and way of life of the peoples inhabiting this coast have attracted interest since ancient times, this could not but make people think about the organizational form for expression of such curiosity. However, until late XVIII century no real actions have been taken in this regards in Irkutsk. Everything changed when Frants Nikolaevich Klichka, one of the Irkutsk Governors, got down to it. It was he who “caused the stir” in the city society by appealing for donating funds for the construction of a museum and a library in the city and, moreover, confirmed his appeal with a personal example. Wealthy citizens, first of all, merchants (Dudarovskys, Medvednikovs, Trapeznikovs, Sibiryakovs, Melnikovs, Basnins) who were not indifferent helped to implement the project that was very important for the Siberian region.

The opening of the East-Siberian Department of the Imperial Russian Geographical Society in Irkutsk became a new stage in the life of the Irkutsk Museum, because the Museum was transferred to the administration of the above-mentioned serious scientific center (1854).

But, unfortunately, unforeseen circumstances have made adjustments to the history of the museum. Just like many large Siberian cities, Irkutsk was a “made of wood”, many houses were true works of art, however, this fact did not save them from fire. In June 1879 there was a terrible fire: almost half of the city burned out, and, according to the memoirs, the best central part of the city was destroyed. It was a sad period for the building of the Imperial Russian Geographical Society. The fire was spreading through the city at an incredible speed, involved the square where the building stood and destroyed its contents. The flame of that fire ruined 10,227 books of the library, 22,330 copies of various natural-historical, ethnographic and archaeological objects, numerous old files of various Siberian institutions, precious scrolls relating to the reign of Ivan the Terrible...

All the things from the collection that survived by some wonder were placed at the new office of the Imperial Russian Geographical Society, on the outskirts of Irkutsk, in only two small rooms.

Rapid restoration of the museum was largely explained by the fact that this was a common wish of the citizens who no longer imagined the life of the city without the museum and the official administration of Imperial Russian Geographical Society that, to begin with, put forward the issue of having their own building. They needed their own building, because it was impossible to locate the library and museum exhibits is in a private building. Moreover, they had to pay rent. At the same time, the construction of a separate building was supported by significant arguments. In addition, these were supplemented by care for young people whose educational institutions could not offer them such scientific materials like those included into the museum’s collection.

It was left only to find the money. The Administrative Committee of the East-Siberian Department of the Imperial Russian Geographical Society that owned the museum had 29 thousand roubles. The institution announced fundraising. The funds were raised by the residents of various Russian settlements. Funds were sent from both capital cities – St. Petersburg, and Moscow, as well from the provincial towns. The Governor-General of Eastern Siberia Dmitry Gavrilovich Anuchin addressed a letter to the leaders of the commercial and industrial sphere with the request to render financial assistance to such a good cause. It can be assumed that the development of museum science, first of all, geological surveys of the Baikal region, had to be of interest, most probably, to gold producers. The expeditions presented a real prospect of discovery of new gold-bearing deposits and, therefore, new gold mines at the place of discovery.

Funds were donated by private persons and various organizations. These, as well as scientific institutions, sent their printed publications and books, transferred their collections and collection duplicates, in order to support the library. 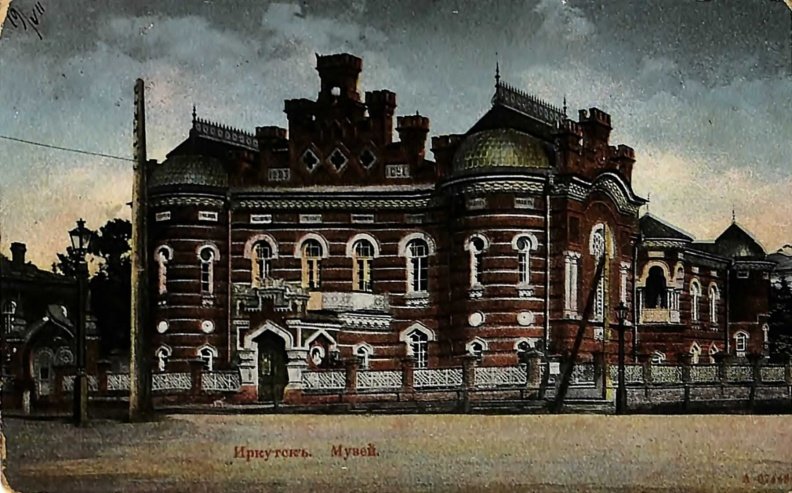 The land plot for the construction of the building was allocated by the Ministry of Internal Affairs.

The city authorities made a conclusion after the horrible lesson of 1879. One of the main streets, Bolshaya Street, was attractive as a convenient place for the construction of residential buildings and commercial premises, even before the fire. After the fire the City Duma issued strict instructions to ban the use of wood in the construction of buildings on Bolshaya Street and around: only stone walls and iron roofs should be involved in the construction. The street was improved: the sidewalks were paved, and the roads were laid with cobblestones.

The Ministry of Internal Affairs allocated a land plot on that very street for the construction of a new building of the Imperial Russian Geographical Society and the museum. The land plot was located on the corner of Bolshaya Street and Angara Embankment.

An important contribution to the implementation of the plans of the Imperial Russian Geographical Society was made by the gratuitous design of the project and calculation of estimated costs of the building construction performed by the architect - baron Heinrich Vladimirovich Rosen. Rosen was characterized by his respect to work, high professionalism, and interest in the experience of his colleagues. Alongside with Moscow and St. Petersburg architects, he began to use unplastered brick as construction material, for it was distinguished by beautiful color and plastic expressiveness in the structures made of it.

Initially, it was planned to build only a universal two-story stone building. According to the plan, the ground floor had to have a lobby, a library, an apartment for the conservator (keeper) of the museum, and an archive. They planned to arrange an exhibition of the museum and a meeting room on the second floor. Fortunately, the conclusion on the impossibility of combining the residential and museum zones was made in time, and G.V. Rosen created another project - a stone annex for the keeper’s apartment, noteworthy, a two-story one.

The annex was being constructed simultaneously with the main building of the museum, and they were built in a surprisingly short time - in just a year and two months. The foundation of the main building was laid on September 26, 1882. It was completed in September 1883, but the need for the placement of collections, arrangement of the library made it possible to solemnly open the building only on October 6.

The solemn opening ceremony was attended by the top officials of the province and the city, the Bishop of Kirensk Right Reverend Makarius, Most Reverend Veniamin, as well Archbishop of Irkutsk and Nerchinsk who held a prayer service.

The new meeting room of the Imperial Russian Geographical Society welcomed those who entered with the two portraits: of His Majesty the Emperor and the patron of the department, Governor-general D.G. Anuchin - thanks to his unprecedented support, the funds for the construction of both the main building and annex had been raised.

It is no coincidence that we are telling this story with a focus not on the museum’s expositions, but on the history of the building constructed in a Moorish style that was absolutely non-characteristic of Irkutsk. Leave alone Irkutsk, there were only few such unique structures all over Russia! The main features of the Moorish style are linked with the presence of a large number of arches of various shapes, decorations of cornices and arches, double windows, domes, motley red-and-white color of buildings, beautiful stucco and carved decorations.

The central building of the museum is a real castle with rounded towers at the building’s corners topped with helmet-shaped domes. The solid pillars of the entrance porch are adorned by elegant stucco in the form of vines.  A balcony enclosed by an ornamented grid is situated above the high porch, on the roof. The driveway gates connecting the museum and the annex are made as an arrow-shaped arch resting on two small pillars.

All facades were finished with red brick, partly sandstone. But one of the most remarkable facts is that the frieze of the main building tells us about the famous researchers of Siberia, Baikal, and entire Asia, including the names of G.V. Steller, S.G. Gmelin, P.S. Pallas, I.I. Georgi, G.F. Miller, F.P. Wrangel, S.P. Krashennikov, N.M. Przhevalsky, I.D. Chersky ... The first part of the names was carved in 1883, and the rest of them - in 1901. 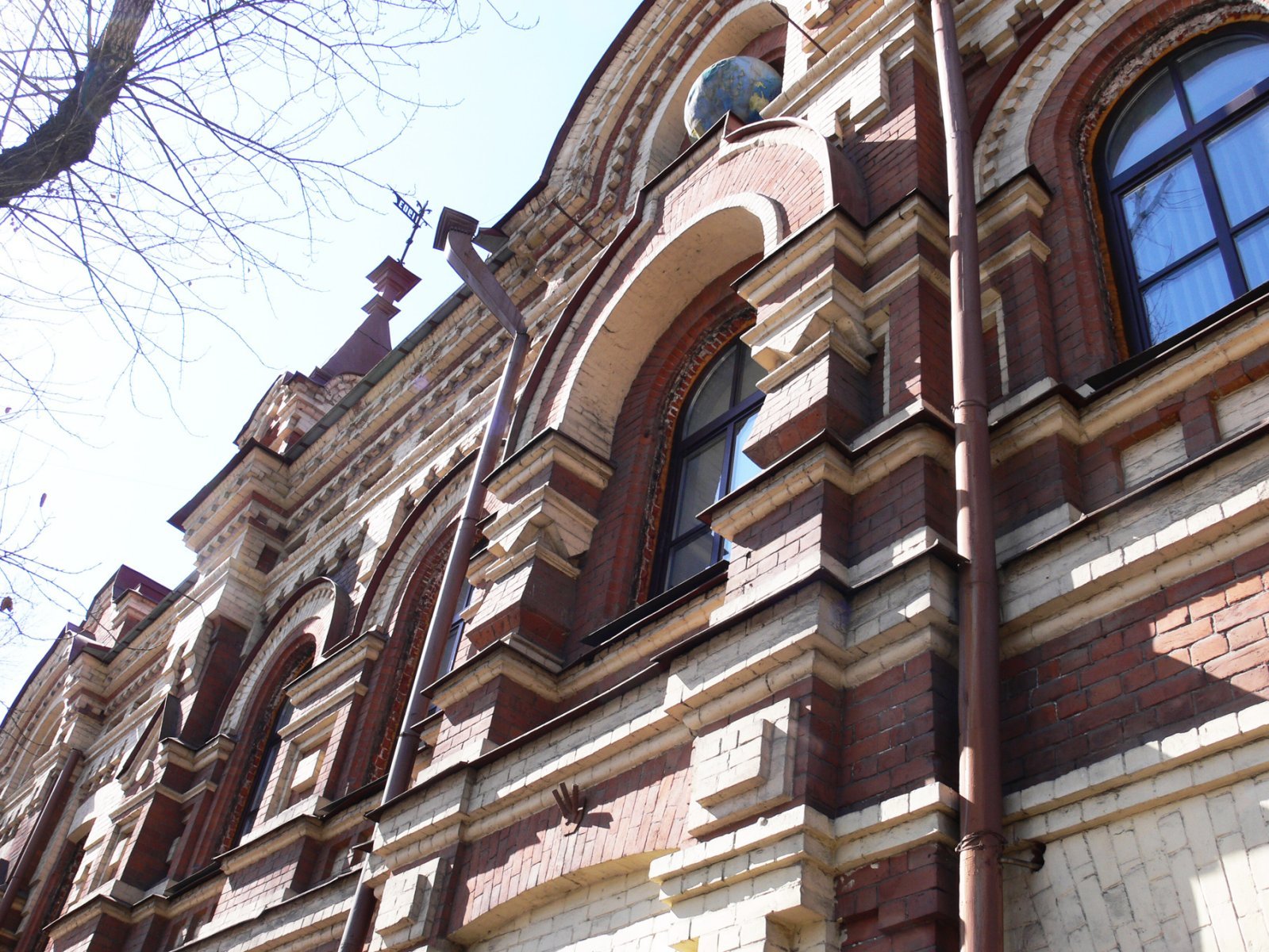 A two-story annex was erected in 1891: new halls were made inside it. Once more the architect G.V. Rosen came to rescue: he created the plan for the new premises. Of course, the museum did not have funds for such construction, but sympathetic philanthropists made their contributions once again. It is believed that the largest individual contributions were made by the representative of the well-known Irkutsk family, the gold miner Innokenty Mikhailovich Sibiryakov (6 thousand roubles) and Petr Aleksandrovich Sievers, the Advisor to the Irkutsk provincial government, the chamberlain of the imperial court, a member of the Imperial Russian Geographical Society (9 thousand roubles). So, these new halls were named after Sibiryakov and Sievers. In addition, in February 1910, an astronomical observatory was opened on the right tower of the museum building (if you look from the embankment).

This stylistic architectural complex emerged in Irkutsk in the period from 1883 to 1991; its appearance has remained virtually unchanged even by now. Actually, a fence of stone pillars connected by a lacewood grating was the only thing that disappeared.

Today this unique building is still one of the architectural sites most loved by the city residents.

The materials of all departments of the Irkutsk Museum of Regional Studies (history department, nature department, as well as the “Window to Asia” department and “Angara Icebreaker” department) present everything that is directly related to Lake Baikal. They feature archaeological findings - carved statues, images of animals, various decorations, knives, and unique ethnographic exhibits associated with the spirits of Baikal, shamanism; there are also models of Baikal ships, photographs, lithographs, paintings and engravings, stuffed Baikal animals, birds...

It can be said that that the building itself is a monument to those whom we are calling famous explorers of the Baikal Region and entire Siberia.