We Spin the Pedals: a Bicycle Route from Irkutsk to Lake Baikal

The very convenient location of Irkutsk gives all city residents and tourists an opportunity to go on exciting cycling excursions, from “weekend” trips to several-day trips. You can reach Lake Baikal through absolutely different routes, including the one that can rightfully be called the most popular: Irkutsk - Olkhon. 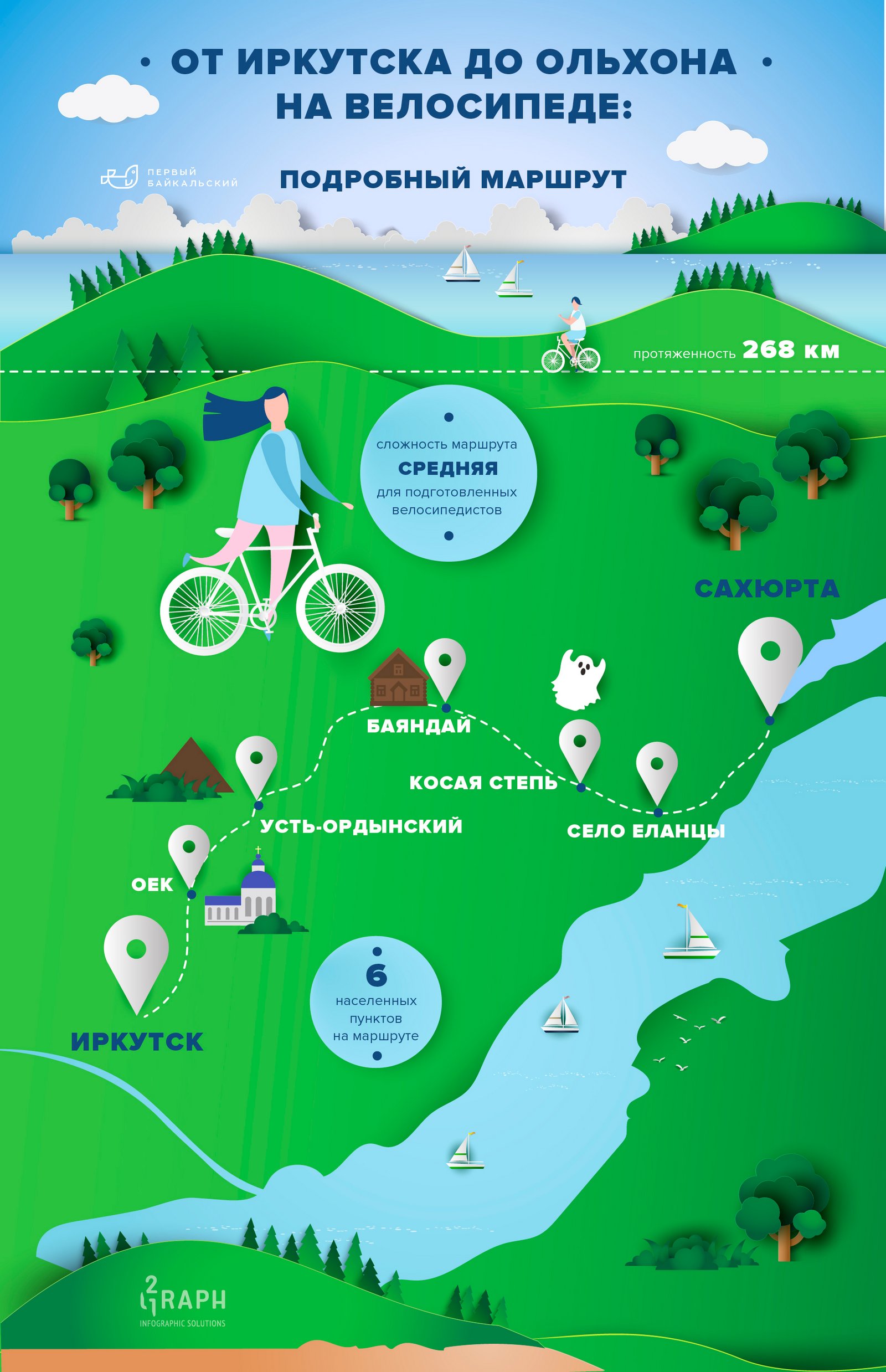 The distance between Olkhon and Irkutsk makes up about 250 km. The size of the island is not very large - about 80 km long and 15 km wide. All the same, there are plenty legends, stories, mysteries and shamanic traditions concerning it! The route to Olkhon passes through a series of inhabited settlements of the Baikal region, each of them can also be a part of an educational journey.

So, leaving Irkutsk, we move through Oek, Ust-Ordynsky, Bayandai, Kosaya Steppe, Elantsy to the settlement of Sakhyurte (MRS) which is located near the ferry running to the island of Olkhon - you can reach the island from that place. Separate bicycle trips will include the way to Olkhon itself and simply trips across the island. But one should remember that such a journey will require a decent bike and a lot of patience (the experience is mandatory!).

The first point of the route is the settlement of Oek. The very name of this settlement still causes controversy, although the village was founded in the 17th century. The owners of this land have been considered the representatives of the two Buryat families - Buyanovsky and Abaganatsky - since ancient times. Their camping ground were located right here, but the Governor Leontii Kislyansky ordered to settle the peasants at a distance of 36 km from Irkutsk, at the confluence of the Oek River and the Kudu River, so the Buryats were forced to migrate “up the Oek River”.

Some people associate the toponymy of the name with the Buryat word “oyoho” which means “sewing, embroidering, knitting”. Others believe that the name comes from the Turkic “oyok, oyuk”- “sign”, “road sign”, “guiding place”. Still others state that it was colonization that forced the Buryats to migrate. And these places were marshy and swampy. During the passage from place to place Buryats’ utensils were constantly spoiled, their wagons broke down, and it was the Buryats’ annoying exclamation “oy-yokh” that gave the name to the place.

Interesting facts from the history of the settlement

- Oek hosted a stage of the convict road, through which the exiled were sent to the northern regions of Irkutsk province.

- Oek was considered the secret “capital” of the Decembrists. The Prince Sergey Petrovich Trubetskoi (the dictator of the riot) with his wife Ekaterina Ivanovna settled here in 1839 after the Prince’s imprisonment had ended.

- The most interesting object of history and culture is the Church of the Assumption of the Blessed Virgin. It is a brick temple with a decor in the style of the late Irkutsk Baroque, which was being built for a long time, from 1812 to 1841. The design of the window openings of the temple is particularly striking: the frames have curvilinear edges, this style is close to the Buryat national ornament in its nature.

- It is interesting to visit the Museum of Village History. The address of the museum: 91d Kirova Street.

The settlement is an interesting place not only in its history, but also in an opportunity to visit the museum founded back in 1944 (6 Lenina Street). The museum exposition displays history, culture, religionfrom ancient times to the present days. The territory of the museum includes an open-air complex “Buryat Peasant Estate” where the most interesting ethnographic holidays are held.

In summer, of course, a bike will help you to get to a unique local attraction - the sacred mountain of Mankhai with petroglyphs. The mountain is located just 12 km away from the village in the Kuda River valley. On the one hand, this is a cult place for the Buryats- Bulgats, on the other - a historical and archeological monument which is represented by the ancient settlement of the Kurykan tribe. The inhabitants of this ancient settlement left the carvings both on the steep cliffs of the western slope and on the red sandstone plates.

The term “Bayandai” originated as a combination of the two Buryat words – “bayan” meaning “rich man, wealth, rich” and “dayda” – “land, vastnesses”. As a result, it means “a rich land, a rich region”. This settlement is located 130 km to the northeast of Irkutsk on the Bayandaika River. It is believed that both the locality and the river are named after Bayandai - the ancestor of the Buryat Bayandaevsky clan of the Ekhirit tribe.

An interesting object for viewing can be the exposition of the Bayandaevsky Ethnographic Museum created in 2011. It is situated on the turn from the Kachugsky highway to Maloe More at 2 Butunaeva Street. The majority of the exhibits have been moved to the open air from neighboring villages.

The settlement is located about 178 km away from Irkutsk. In fact, this is a depressed inhabited settlement, where only 100 people lived in 2010, according to the results of the All-Russian Population Census of that year.

There settlement is situated in the meadow-steppe valley of the Buguldeika River (the place where the Kharik River flows into it): there is a narrow elongated stretch of steppe on the slope - the southern oblique slope of the mountain called “Kosaya Steppe”. Hence came the name of the village.

Once it was a rich settlement. The precise time when Russian settlements appeared on this territory has not been established. But at the beginning of the XIX century  the village of Kosaya Steppe was already quite a large settlement, even a stone Baroque Annunciation Church was being built there (different construction dates are given in different sources). Nowadays the place of the destroyed Church is taken by resisdential houses. Old residents of the settlement believe that this is the reason why they do not live a happy life; in addition to this, there are other unhappy places in the village where a ghost - a mysterious woman in white – can be encountered.

It is a large inhabited settlement located 210 km away from Irkutsk on the Anga River, about 12 km to the northwest of the place where the river  flows into the ultimate goal of our bike tour - Lake Baikal. Elantsy is an administrative centre of Olkhon District, where the equal number of the indigenous people, Buryats and Russians live. But the number of population sharply increases during summer season, since Elantsy is one of the main transit points in journeys to Olkhon and the Bay of Maloe More.

It is believed that the origin of its name is associated with the Buryat word “elga” meaning “cavity, ravine, gorge”.

There are interesting places in the vicinity of the village which can also be reached by a bicycle.

It is located at a 2.5-kilometer distance from the mouth of the Anga River. It is a semicircular bay about 600 meters wide, and it protrudes into the shore to 800 meters. The bay is closed from the Baikal winds by high rocky capes. The name “Aya” is translated from Evenki language as “convenient”, “beautiful”, which fully corresponds to the looks of the bay. In addition to the opportunity to swim and sunbathe on fine sand, this place enables you to get acquainted with two more attractions – the caves of the Aya Bay and rock paintings. The plateau of the Aya Bay and its rocky cliff have ancient caves with the age of about 20 million years old, according to some sources. 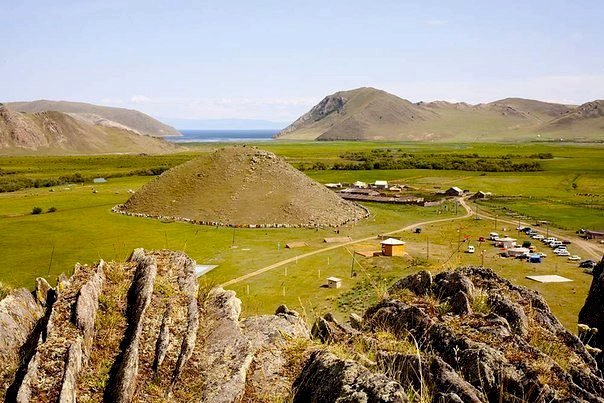 It is located 2 km away from Baikal on the right bank of the Anga River, about 10 km away from Elantsy. Its height is 34 m, due of its regular shape it resembles an artificial bulk mound.

The mountain has been a venue of the most important intergeneric holiday on the coast of the sacred lake since ancient times with the participation Buryats, Mongols, Yakuts, Evenks praising the awakening of nature by special ceremonial games. Therefore, the holiday was associated with the spring, when the ice on the rivers broke up, the first green leaves appeared. The holiday was not limited to noisy feasts, but also included competitions - traditional sports competitions in three kinds of sports: national wrestling, archery, horse racing. These were the famous Yorda games which are being revived today.

They stretch along the last section of the road to Maloe More, from Elantsy to MRS. The location is situated literally next to the road, and one cannot escape paying attention to them, since it is a complex of mysterious caves, shamanic sanctuaries and rock paintings. The Tazheranskii Massif is a unique formation that has collected about 150 different types of minerals at the territory equal to only 1 sq. km, and the age of the massif makes up 300 - 400 million years. The most popular cave of the Tazheran steppe is the Mechta Cave (“Dream Cave”). The distance from the road to it amounts to about 6 km: you need to go to the edge of the plateau from where you can see Baikal, to the upper reaches of one of small river valleys of Baikal. The steppe also has mineral lakes located in the northeastern direction in an elongated valley on the 93rd-95th kilometers of the road.

It is located 5 km away from the settlement of Elantsy on the left bank of the Anga River on the treeless Sakhyurte Mountain (Silicious Mountain). Ancient rock carvings have been preserved here, and a small lake called Khurai-Nur is located nearby. According to the legend, it was the habitat of the sacred swans considered to be the progenitors of all Khori-Buryats.

The settlement of Sakhyurta (MRS)

In our next article we will address the topic of riding around the entire Olkhon by bicycle.