Due to the efforts of the state and volunteers, it has been possible to preserve immensely interesting natural monuments on the coast of Lake Baikal, many of which emerged during the Soviet era and received regional status in our days. One of these is a peculiar speleological object - “Chasovnya Cave” created on February 25, 1985.

One of the main advantages of this cave is its easy accessibility for everyone who wants to visit it. But some time ago the things were different.

The cave is located in the Malaya Kadilnaya gorge, at an altitude of 50 to 300 meters above the lake level, on the territory of the Baikal National Park. 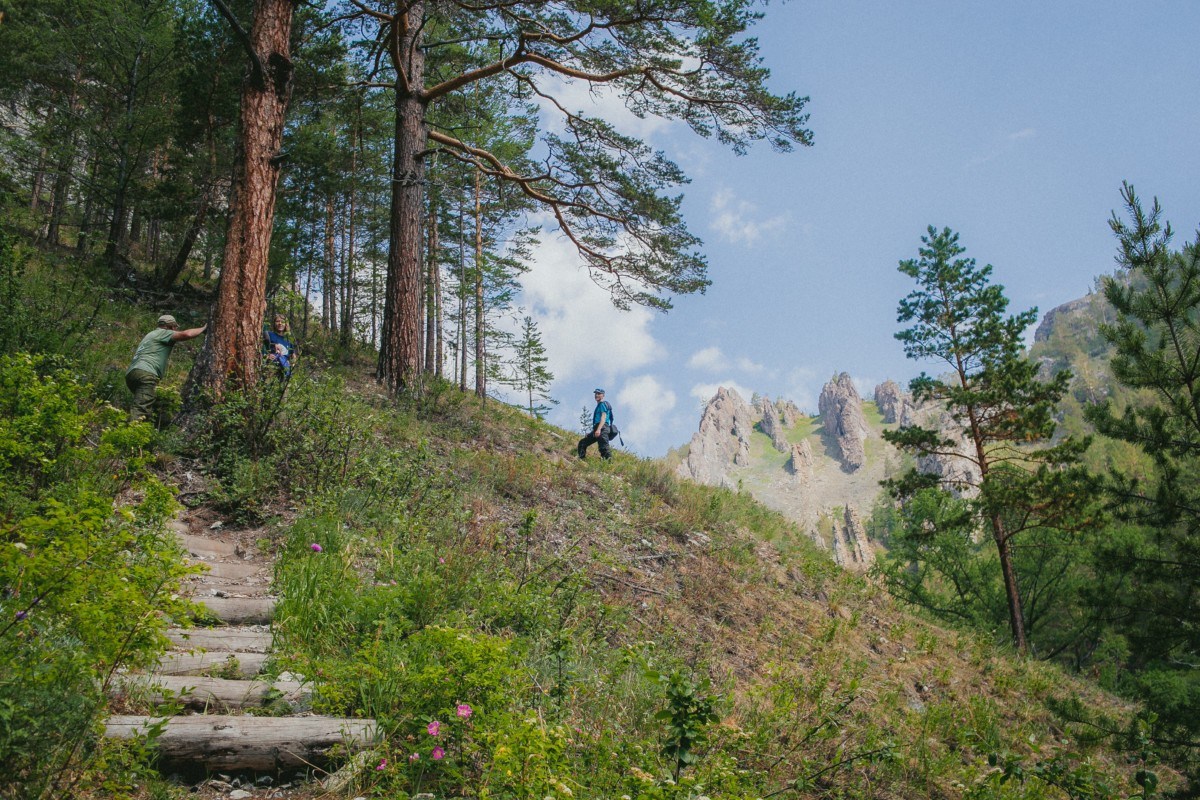 The history of construction of a well-equipped road to the natural monument is one more evidence that volunteering is not only a form of ecological tourism, but also a real contribution to the protection of Lake Baikal and its unique environment.

The karst calcareous cavity –Chasovnya Cave - is situated far from the places of human habitat, but there have been more than enough people wanting to visit it, despite the fact that they had to climb onto an extremely difficult slope.

The road to Chasovnya goes through the area where limestone is the basic rock, and the loose trail itself did not allow people to stand on it steadily. The slope was destroying very quickly. An uncontrolled number of people wishing to reach the speleological attraction laid new paths, holding on to the grass and bushes. Beautifully blooming plants and lush grass were torn out, the soil was trampled, the place was actively destroyed, which threatened with the real impoverishment of the entire ecosystem.

As a result, the slope fell off to a great extent and lost its natural vegetation cover, and also became simply dangerous for tourists.

The employees of the Baikal National Park paid attention to this. Following their initiative, the help was rendered by the members of the Great Baikal Trail project, one of its goals being popularization of the natural attractions of the tourist route on the Baikal coast.

In the course of two years, they created comfortable conditions for tourists by building steps and handrails, a serpentine road, installing warning signs and information stands. In October 2012, they announced that they completed their works and equipped a tourist science and educational trail to the cave.

We can get the main information about the Kadilinskiye Caves from the wonderful book titled “Through the Caves of the Baikal Region” written by the famous Siberian scientist, historian, archaeologist, ethnographer P.P. Khoroshikh. Unfortunately, the most part of all works dedicated to these natural formations on the Internet was shamelessly copied from the book of Pavel Pavlovich, without a hint at indication of his authorship. Today we want to pay tribute to this prominent person who raised the question of the need to protect Kadilinskiye natural objects already more than 60 years ago.

P.P. Khoroshikh described the way to the Chasovnya Cape in the following way: “The complex of Kadilinskiye caves is located 12 kilometers to the north of the Skriper Cave in the valley of Malaya Kadilnaya. The path to the Kadilinskiye caves from the Skriper gorge is a mountain trail near the coast of Lake Baikal. Along the way, one can see the outcrops of various rocks influenced by weathering processes. Some remains affected by weathering have very bizarre shapes. On this way there is a passage through the Chortov Bridge that is well known to all tourists who have been on Lake Baikal. The trail near the Chortov Bridge passes by steep cliffs consisting of crystalline rocks. At a distance of 9 km from the Skriper cave, the trail goes into the wide gorge of Bolshaya Kadilnaya and passes near the furnaces where lime is burned. From this place the trail passes along the terrace of Lake Baikal, and the Malaya Kadilnaya gorge begins 3 kilometers away from that place. The caves in the Malaya Kadilnaya gorge are located in limestone rock, at an altitude of 60 to 250 meters above the level of Lake Baikal”.

We clarify the route for those who want to see the karst cave of the Kadilinsky complex with their own eyes. The eponymous Bolshaya Kadilnaya cape and gorge are located approximately 24 kilometers away from Listvyanka; you cannot miss Malaya Kadilnaya – it is located somewhere in the middle of the route from Listvyanka to the village of Bolshoye Goloustnoye, if you go by water. The stone crest of the northern slope of the creek valley with beautiful white cliffs can be seen from afar.

If you wish to explore the Great Baikal Trail, then the distance from Bolshaya Kadilnaya gorge to it makes up 36 km. It will take you about 40 minutes to easily get to Malaya Kadilnaya from there.

Do not Mix the Names Up 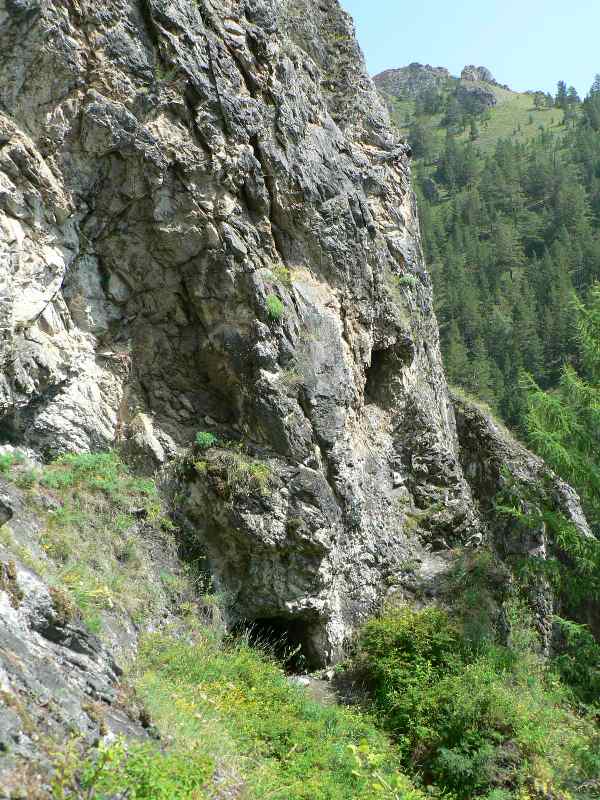 The determining feature of natural objects located near the cave is the name “Kadilny” – it includes the cape, gorges (Bolshaya and Malaya, translated as “Big” and “Small”, correspondingly), a river, and the Chasovnya Cave itself, also known as Malaya Kadilnaya.

It is quite simple to explain the name in Russian (connected with the notion of incense), if you recall that there is an abandoned limestone quarry on the way to the Malaya Kadilnaya gorge. Back in the 18th century, a well-known researcher Johann Georgi wrote about it that, according to local residents, “lime was burned here, which was why there was always smoke there, as if from incense burnt in churches”. This Old Russian word actually predetermined the modern name.

The People of the Iron Age Lived Here

The portal of the Chasovnya is low and rather wide. But this entrance quickly turns into a narrow corridor about 5 meters long, where you have to move almost on all fours. The spacious oval hall (8 by12 meters) of the cave was very well described by P.P. Khoroshikh: “Thanks to the wide ascending opening, the cave is well lit. A massive layer of recent deposits lies on its bottom. The cave was inhabited in the early Iron Age. The findings include bone and iron arrowheads, iron knives of various shapes, horn pads for a compound bow, birch bark sewn with hair, a spindle for spinning, fragments of pottery with different ornaments, boar tusks, bones of bulls, horses, ringed seals and other animals. In 1865, P. Kropotkin discovered human bones and several skulls in this cave. One of the skulls had obvious signs of violent death on it: it was dissected in two places. The cave was evidently also used by its ancient inhabitants for burial ceremonies”.

In addition, visiting Chasovnya also gives you an opportunity to see the breathtaking panorama of Lake Baikal from the cave’s arched platforms.