The Blue Pearl of Mongolia, a Younger Brother of Lake Baikal: Lake Khubsugul

The legends about the greatness and uniqueness of Lake Baikal are known all over the world. But did you know that the Glorious Sea had a younger brother? This is a stunning, crystal-clear lake Khubsugul that charms and fascinates people with its pristine beauty.

Mongols call this lake “Khubsugul-Dalai”, “Khuvsugul” or simply “Blue Pearl”. This is one of the most mysterious, wild and unexplored water reservoirs in the world. It is included into the list of 17 oldest lakes with the age exceeding 2 million years.

The blue lake is located at the southern slope of the Eastern Sayan Mountains, near the foot of the majestic ridges of Khiyn-Nuuru, Bayan-Zu and Munku-Sardyk, at an altitude of 1646 meters. Due to this, the water of Khubsugul is not only inferior to Baikal in its transparency, but is also enriched by mountain oxygen.

Khubsugul is the deepest water reservoir in Mongolia, its maximum depth makes up 262 meters. The lake stores about 2% of the world’s reserves of fresh drinking water.

The Connection between Khubsugul and Baikal

The younger and elder brothers look pretty similar: both are shaped like a sickle. However, the contours of Khubsugul are not as crooked as those of Baikal. In addition, the lakes are interconnected by a common network of mountain water reservoirs. A total of 96 rivers flow into the Mongolian lake, and about 46 rivers flow out of it. One of them is Egiyn-Gol, this river connects the brother lakes with each other. The waters of this river fall into the left tributary of the Selenga River, flow 1200 kilometers and then fall into Baikal. According to the latest scientific data, about 300 rivers flow into the Baikal, and only one of them – Angara – flows out of the Great Lake.

Besides, the lakes are located quite close to each other. The direct distance from Khubsugul to Baikal is only 200 kilometers. 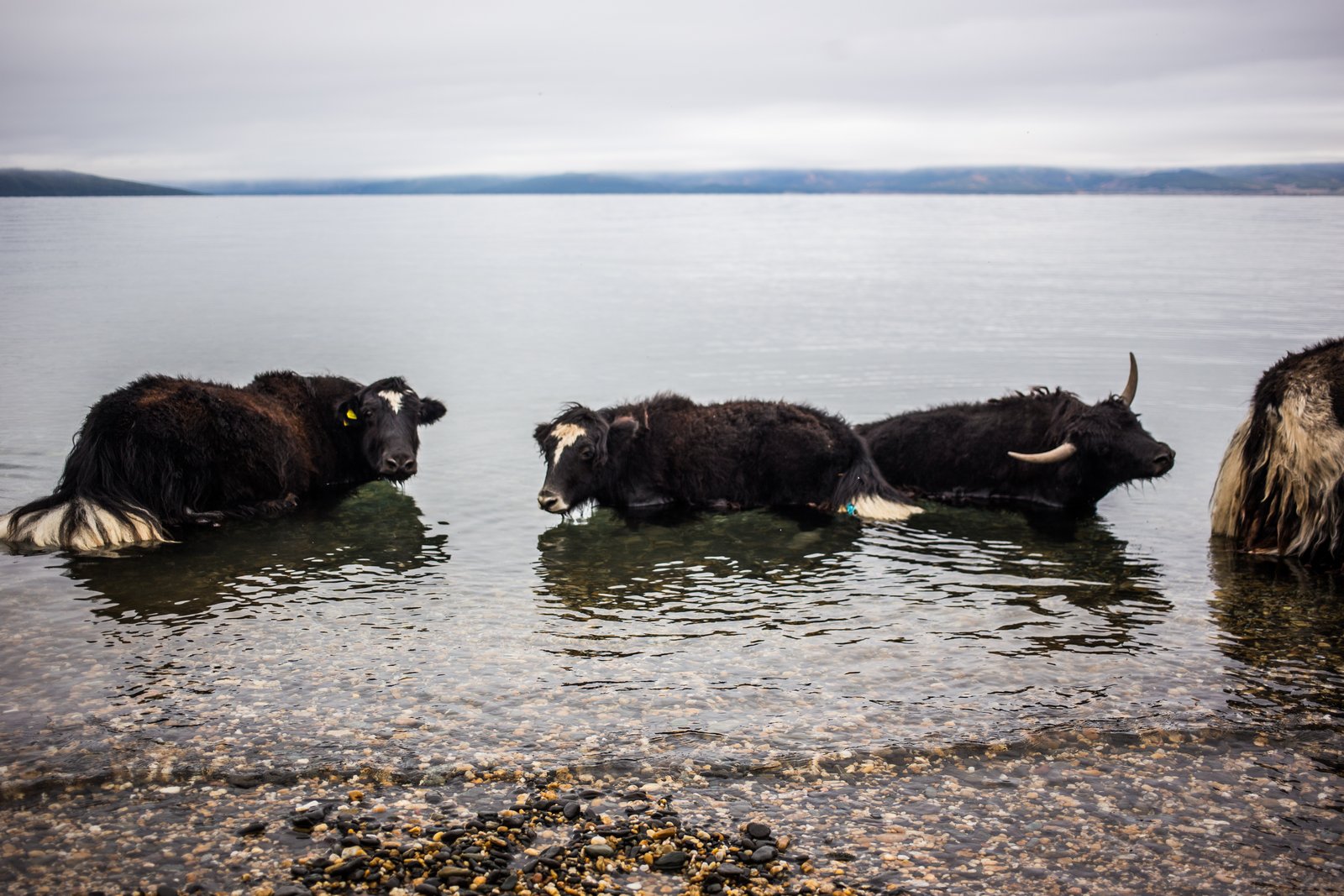 The surroundings of Lake Khubsugul are still a sample of pristine wildlife not touched by the man. Travelers are amazed at the peace and silence of these places. Mongols justly consider this territory to be sacred. Therefore, if you really want to retire to wild nature and forget about the city hustle and bustle, you need to go to this lake.

Many rare animals listed in the International Red Book live in the area of Khubsugul: argali, musk deer, brown bear, sable, Siberian mountain goat, moose, wolf, wolverine. You can encounter a reindeer or a yak pretty often in these places.

The underwater world of the “Blue Pearl” is also of great interest for researchers. At least 9 species of fish live in the lake. These include lenok, burbot, large-size grayling. Local people do not catch fish, considering the lake’s inhabitants to be sacred. Therefore, the fish fauna of Khubsugul has preserved exactly in the same state as it had many years ago.

Attraction to Be Seen near Khubsugul

So, if you are going to have a vacation or several days off, then you should surely visit the younger brother of Baikal. Moreover, there is an excellent asphalt road leading to it.

Everyone will find something special and interesting for themselves here. The fans of adventure will be able to spend a night in a tent near the campfire against the background of the most picturesque lake of Mongolia. Those who prefer comfort and convenience will find more than 30 equipped tourist centres in the villages of Khankh and Khatgal in the vicinity of Khubsugul. However, local tourist centres are not usual high-rise buildings, but exotic Mongolian yurts. A unique zest of the place, national cuisine, and wonderful beauty of the nature will deeply impress you.

During the warm season many travelers prefer to explore the surroundings of Khubsugul on horseback. Horses are still the main means of transportation in the villages. In winter one must certainly try a sleigh ride, admiring the snow-covered mountain peaks and the brilliant ice of the lake.

The Main Attractions near the Lake:

This is the highest peak among the Eastern Sayan Mountains: the altitude of the bald mountain amounts to 3491 meters. Every year the peak of Munku-Sardyk attracts thousands of climbers, sportspeople and fans of active recreation. The beauty and majesty of the mountain strikes imagination and remains in memory forever. And if you do not plan to climb to the top of the mountain, be sure to admire it from a distance: the sight is mesmerizing.

Dolon-Ula is the largest peninsula on the western coast of the lake. A sacrificial altar for the spirits of mountains was built in its highest part. This place is very interesting for tourists. You should only remember that the journey from the coast to the altar takes about two hours.

There are at least 13 cold, warm and hot mineral springs on the territory of Khubsugul region. The water temperature in these springs varies from 42 to 90 degrees Celsius. Many springs near Khubsugul are not equipped for visitors and have preserved their pristine state. The most famous tourist springs are Bulnai and Ikh-kharus located in the eastern and western parts of the lake’s coast. The water in these springs never freezes and can cure almost all diseases.

This northern settlement was formed several centuries ago as a refuge of Russian merchants. However, even now you can find the old houses of the settlement’s former inhabitants on the territory of Khank. The most interesting fact is that the Winter Tea Road from China to Irkutsk used to pass through this settlement.