Spining the Pedals: a Bicycle Tour of Olkhon

Olkhon is a unique island, and those who want to travel through it by bike, as commonplace as it may sound, will get unforgettable impressions.

The bike travel itself begins when a person disembarks from the ferry. The road leads up the steep hill to the capital of the island - the village of Khuzhir. During3-4 days of active bicycle travel you can explore the entire island.

But we offer you a somewhat unusual route, connected not with specific natural attractions and cult shamanic places, but with the inhabited locations of the island, the vast majority of which are located on its western coast.

Khuzhir is translated from Buryat as “salt marsh” or “salt spring”. This is the largest village on the island established in 1938. As you are traveling through Khuzhir and its neighborhood, a bike will help you to get to the Museum named after. N.M. Revyakin (address: 2 Pervomayskaya Street), the sacred shrine of Shamanka Rock (Burkhan Cape), sacred pillars of Serge (ritual pillars of the Buryats, representing wooden posts meant for the standing of horses). 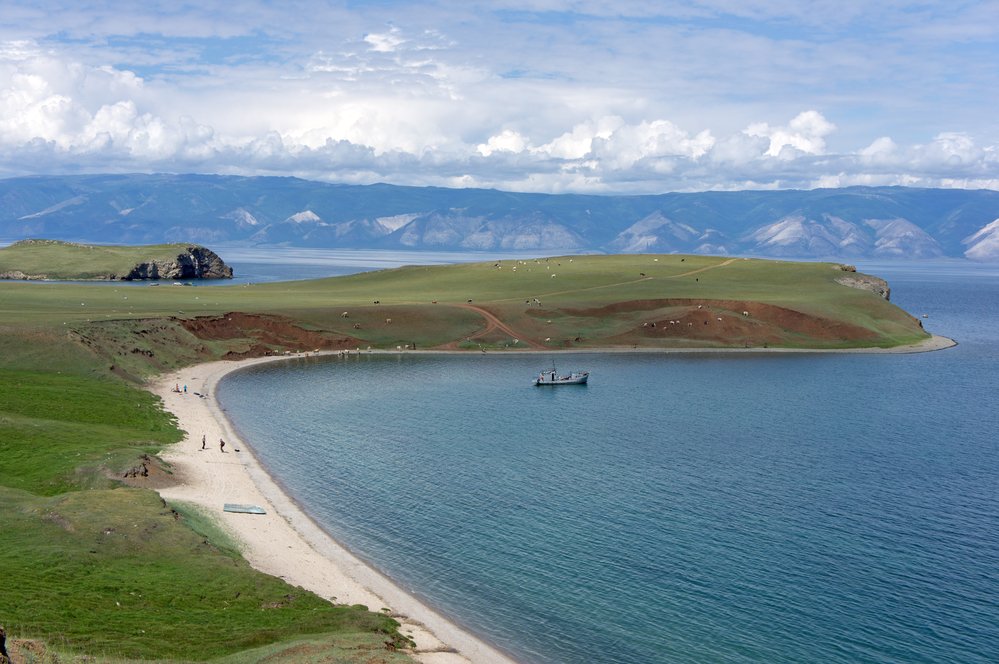 Kharantsy is the second largest settlement of the island, located about 7 km away from Khuzhir. The Cape of Kharantsy (Kharansa), Kharantsy Island, Kharantsy Bay, Kharantsy Creek and Kharantsy Village have gathered in one place here.

The cape separates the Saray Bay, washing it from the south-west, from the Kharantsy Bay. The eponymous island connected to the cape by an underwater spit is located approximately 200 m to the west of the cape. The rocky island has always risen above the surface, and it was no accident that it served as an observation post in ancient times.  Indeed, “kharansa” translated from Buryat means “observation”. This definition gave the same name to all of the objects listed above. The cape is a real treasury of archaeological antiquities represented by ancient sites and burial grounds.

Maly Khuzhir is a small village, also known as Malomorets, located 4 km to the south-west of Khuzhir, on the way to it, 500 meters away from the coast of Maloe More. The indicative feature of this place is the presence of the “Buryat Village” Museum where ethnographic performances are regularly arranged. The main “characters” of the museum exposition are not only yurts, interior items, items of everyday use, food and drink, but also people. They represent national costumes, songs, the dance “ekhor” (a round dance of Buryats), legends, riddles, talk about the life of their ancestors. You can see a shaman beating in a tambourine, driving away evil spirits. Those who wish may taste the traditional white food of the nomadic people - cottage cheese, milk – offered by the owners of the original yurt.

Yalga (meaning “gorge”, “ravine”, “hollow” translated from Buryat) is a small town located 13 km to the south-west of Khuzhir, near Lake Khankhoy. Lake Khankhoy, often called Elginskoye Lake or Yalga Lake, and the adjacent sand spit are included in the list of the most favorite tourist’s places.

The size of the lake makes up about 800x500 meters, and the width of the spit reaches from 30 to 50 meters. The tourists are attracted by warm, clear water and a beautiful beach; wonderful fishing; a beautiful view of Maloe More, its islands, the Primorsky Ridge; the opportunity to see a rare plant, the endemic of Lake Baikal - Craniospermum subvillosum; the presence of archaeological monuments of the Kurykan era (now-defunct tribal community that also inhabited the Baikal region once) and the remains of ancient Mongol fortresses.

The cape with its peak rising about 100 m above the lake level offers one of the most picturesque panoramic views of Maloe More.

But the uniqueness of the bay located at the cape lies in the fact that the coastal sand has an unusual red-and-pink color; this is due to the presence of a large number of garnet particles in it. Fishermen also prefer the coast of the north-western part of the cape for the excellent catch they get there; the geologists have discovered manifestations of corundums here, these gems are known to us as rubies and sapphires.

Uzury ( “uzur” translated from Buryat means “a tip, a top, a peak”, literally - “a mouth”) is the only settlement on the rocky eastern coast of Olkhon located about 30 km away from Khuzhir on the coast of the Khaga-Yaman Bay. The Gorge of Uzury is located between the two mountains (Raba and Tolgoi, the latter is translated as “head” from Buryat language). This is the place where the mountain chain of the eastern coast of the island is intersected by a wide through valley. Actually, this was the only place offering an opportunity to build houses. People also use the names of the Sennaya Gorge and Khaga-Yaman Gorge (“khaga” means “dissected, opened”, “aman” has the figurative meaning of “mouth” translated from Buryat).

Uzury will enable tourists to visit one of the oldest meteorological stations on Lake Baikal; climb the mountain of Raba and observe the circular panorama of the lake; see a small cave in the calcareous rock and an exquisite two-meter rocky arch. Fish figures made of jade were found in this cave; which confirms the fact that fishermen lived there in ancient times; you can also get acquainted with the archaeological monuments of the Neolithic period (IV-II millennia BC).

It is quite natural that there are a lot of picturesque places on the island, and everyone is free to choose one’s own bicycle route.