Sagan-Khushun: The “White Cape” of Olkhon

One of the most interesting places for visits to Lake Baikal is the Sagan-Khushun Cape also known as “Three Brothers”: a sheer cliff of snow-white marble. Some of the most fantastic views of the Maloye More Strait open from here...

A unique and environmentally, culturally, and aesthetically valuable “Sagan-Khushun” natural complex was recognized a monument of regional significance in May 1981. This rather interesting geomorphological object is located on the northwestern coast of the “heart” of the lake – the Island of Olkhon.

The rocky cape made of light marble, covered with lichen spots of brownish-red, stretches for about a thousand meters. The rock that protrudes into Baikal to the largest distance is an almost sheer rocky cliff consisting of pristine white marble.

The name is derived from the Buryat word stems: “Sagan” (“Tsagan”) - “White”, and “Khushun” - “Cape”, which is together translated as “White Cape”.

A group of rocks consisting of three stone peaks identified with three brothers is clearly visible in the southern part of the protrusion.

An old Buryat legend tells that one Olkhon shaman had a daughter and three sons. A girl fell in love, but the father did not approve of her beloved, so she ran away from home. The shaman sent her brothers to search their disobedient sister, turning the young men into eagles. Looking around at the surroundings from such a great height, the eagles quickly found the refugee. However, she was bitterly crying and begged the girl brothers to show mercy for her, not to tell her father that they managed to find her. The shaman did not forgive such a lie. His punishment was cruel. He turned his sons into rocks, and the daughter also got petrified. Today these immovable peaks rise above the waters of the lake and remind everyone of the father’s punishment of old times.

The Peculiarity of the Sagan-Khushun Ensemble 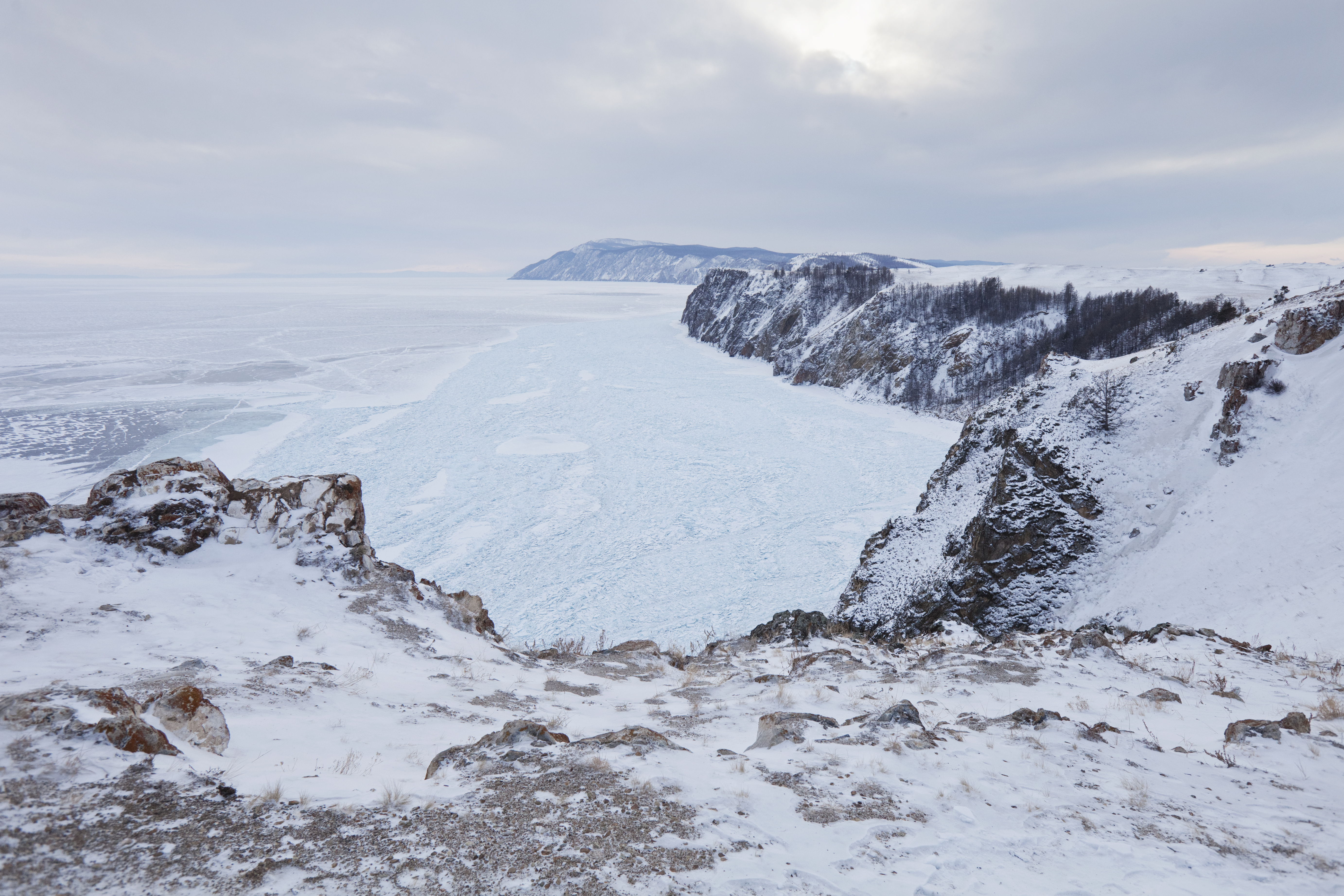 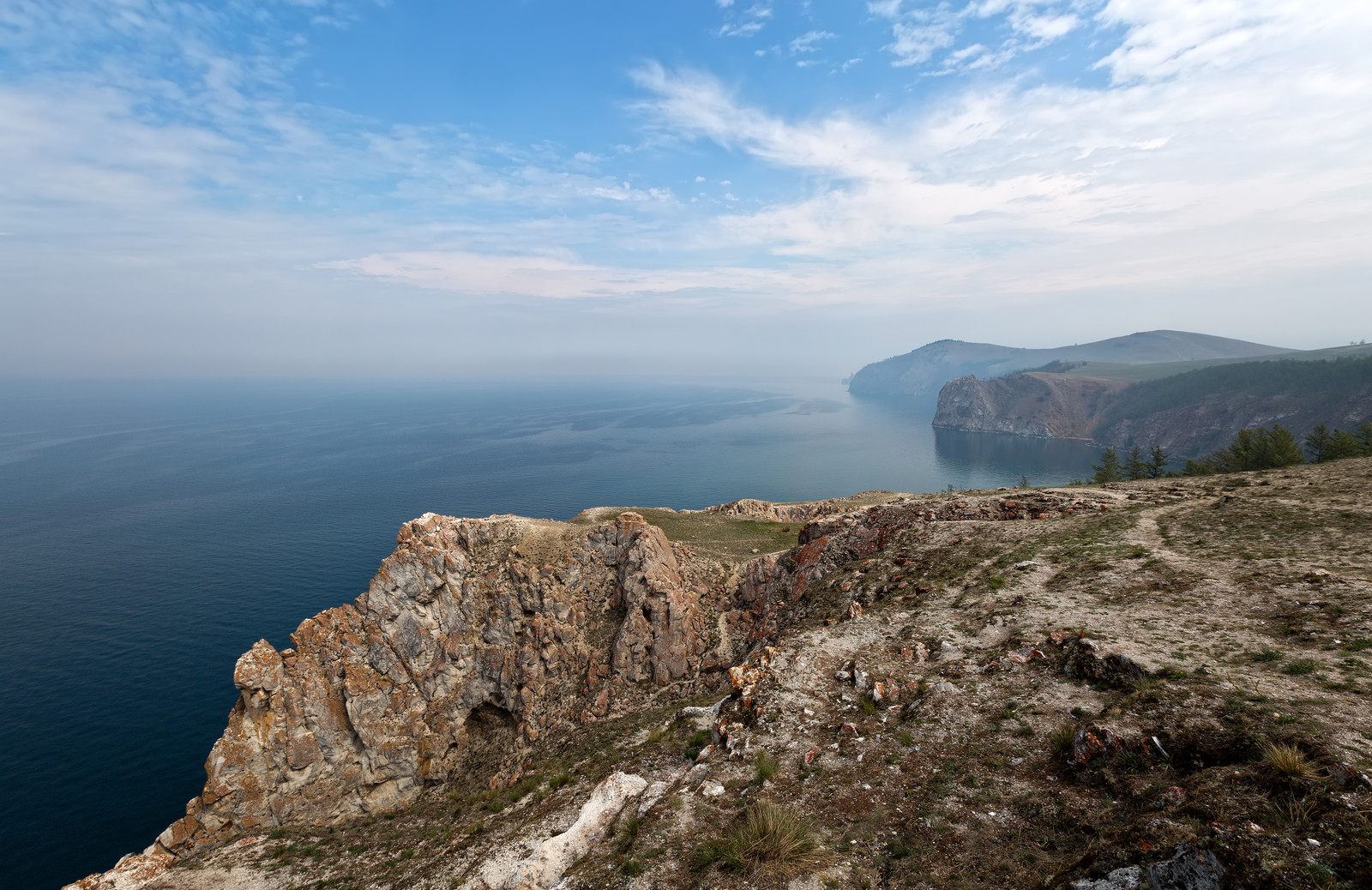 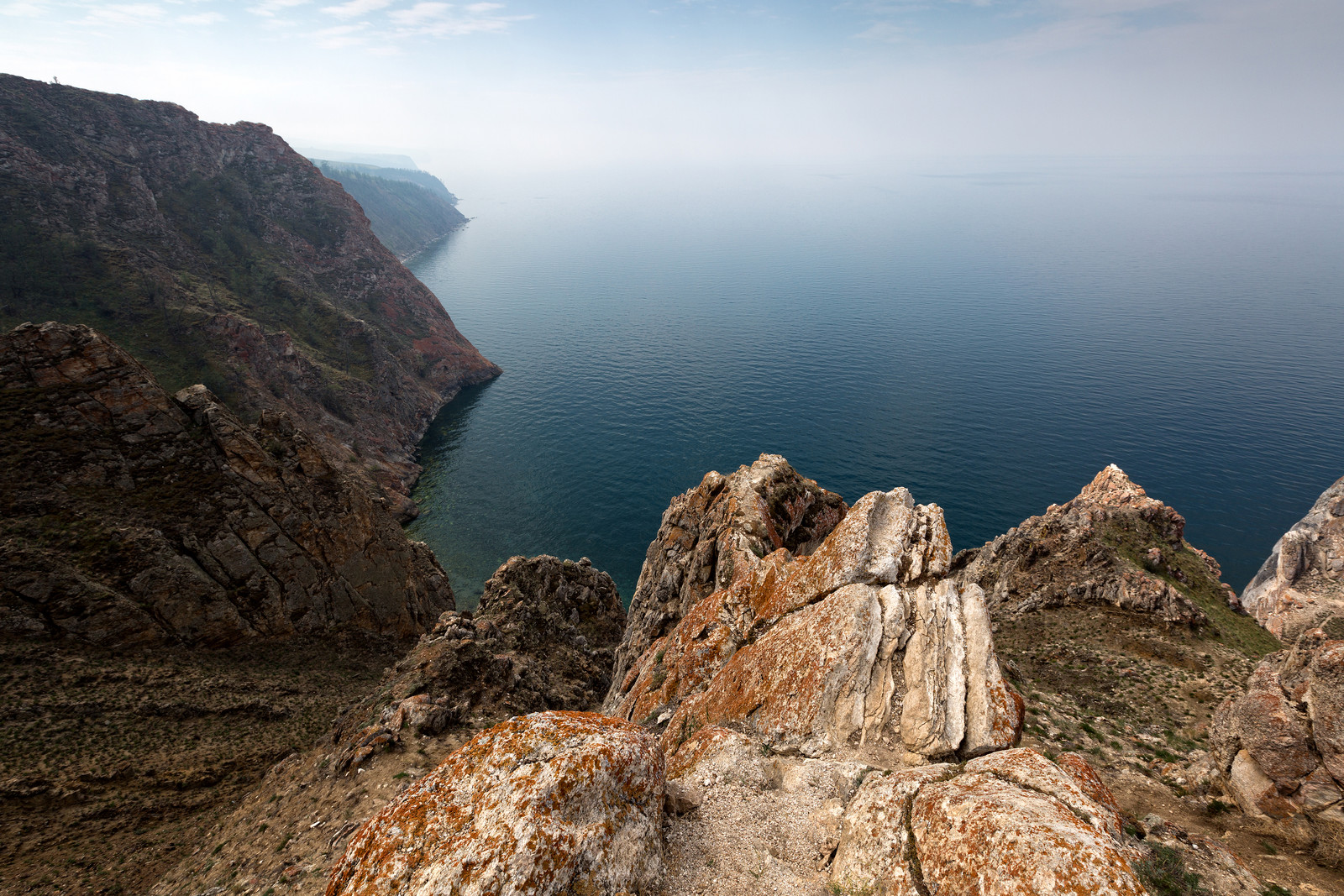 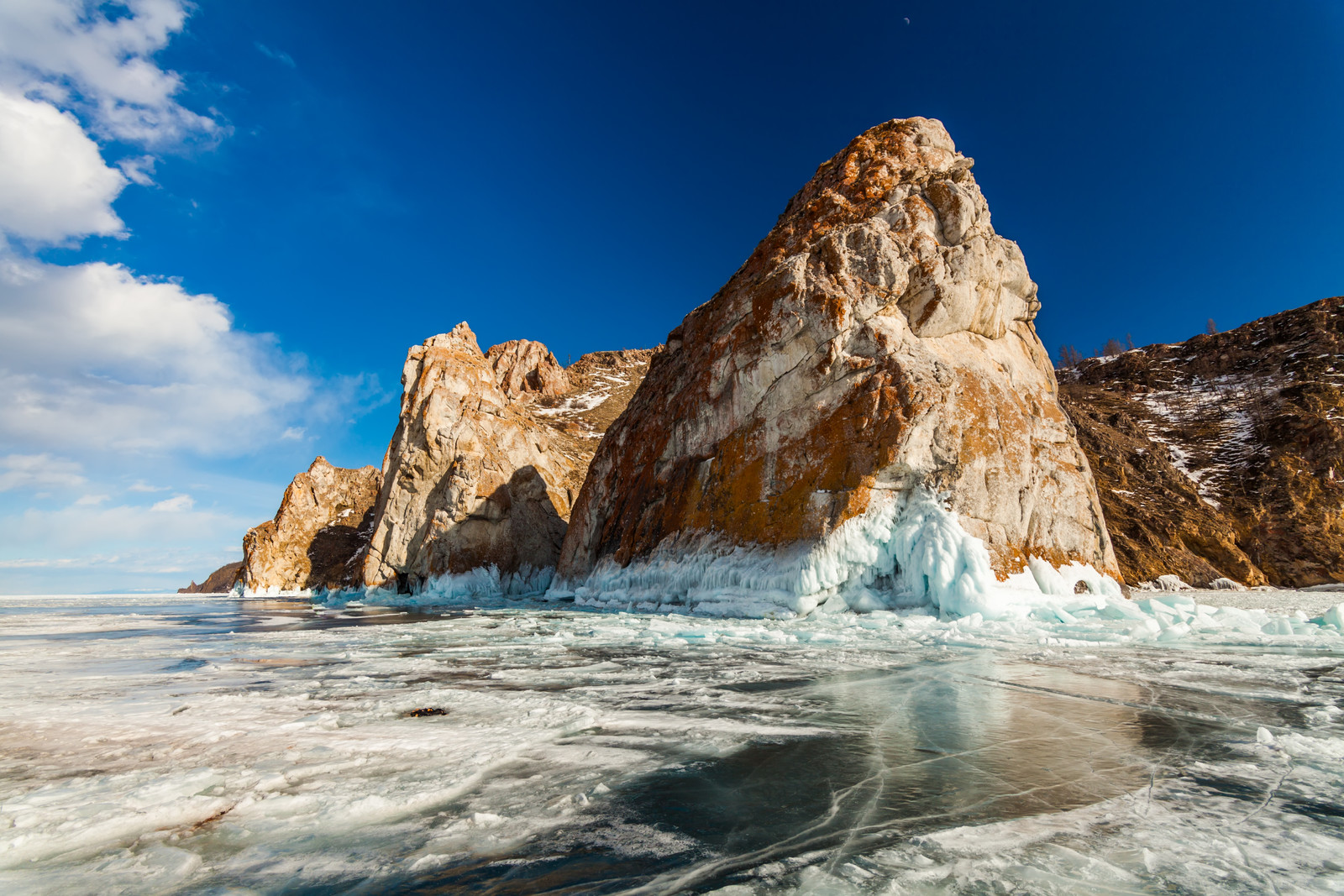 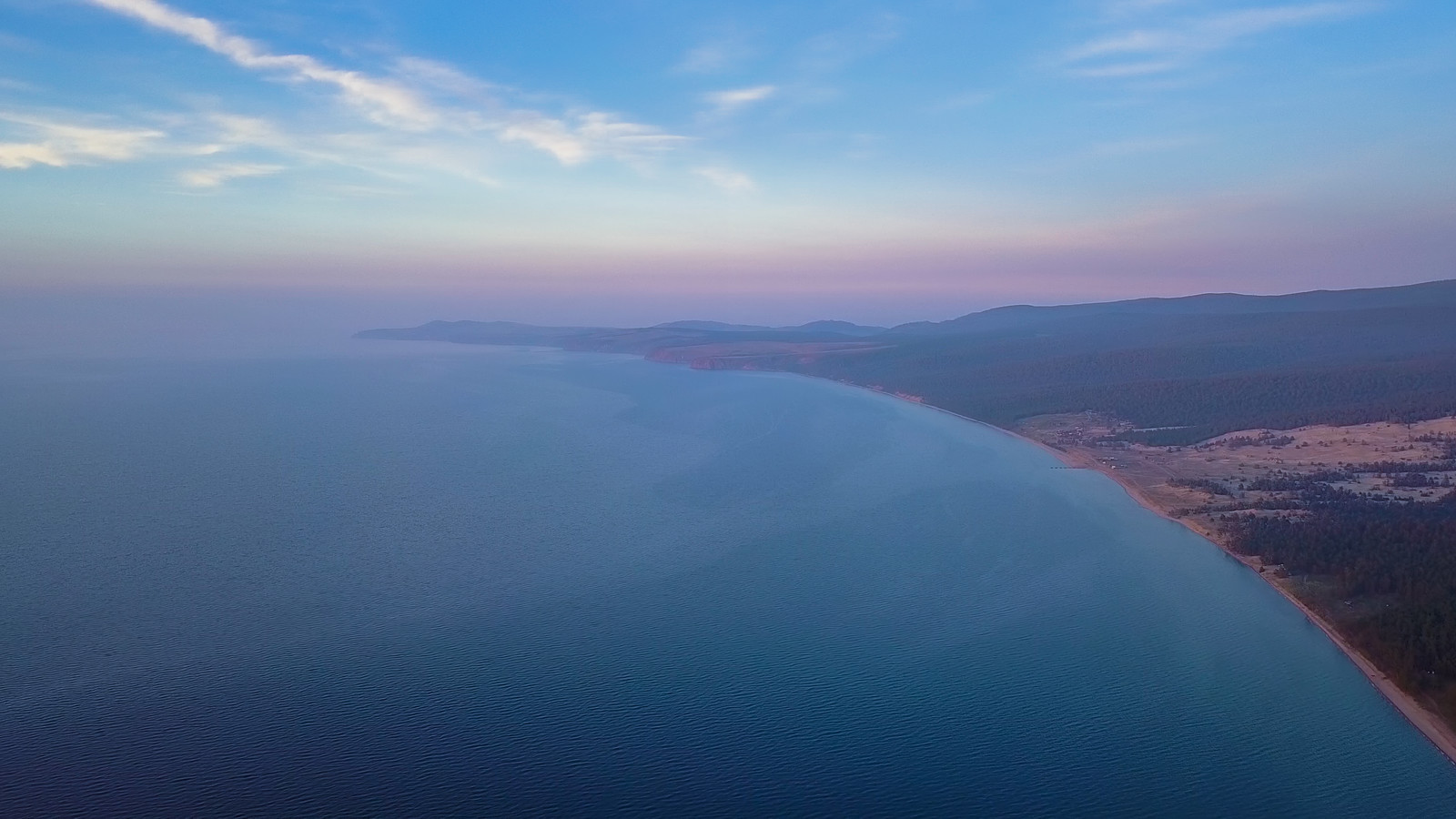 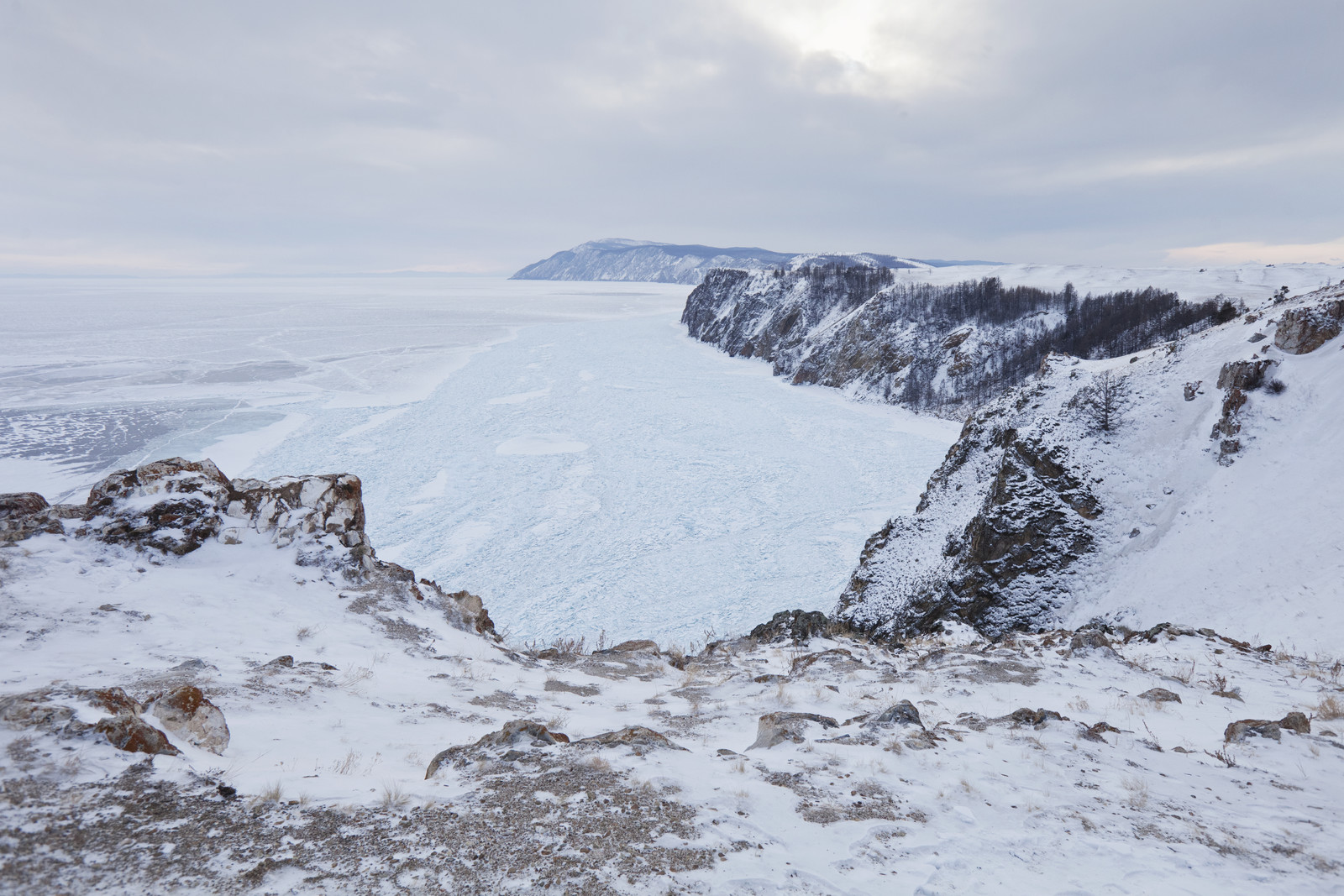 The total area of ​​the monument together with the water area makes up 17.17 hectares.

The uniqueness of the Sagan-Khushun Cape among other natural attractions of Olkhon is associated with the amazing picturesque view offered by it, both from the lake and from the land.

As the travelers sail a boat along the coast of Olkhon, they have an opportunity to admire the long white marble rock mass that abruptly ends at Baikal. However, a completely different view will open for tourists walking to the cape by foot. The seemingly monolithic wall here is divided into separate, fanciful marble rocks with lichen spots and several small fields of green grass. The rocks continue in the coastal zone.

The special beauty of the cape part is provided by red lichen-covered rock outcrops, as well as a wide variety of crates, grottoes and arch formations.

The color of the rock constituting the cape is pretty interesting. There is a transition from light gray to whitish, but a significant part of the surface seems to be “painted” red because of the pigment of many lichens growing here.

Although the main part of the rocks abruptly ends at the Maloye More Strait, there is still a descent to Lake Baikal.

All excursions to the north of Olkhon Island pass by this cape. Experts believe that the upper observation platform does not offer the best overview. They emphasize that one can see the real beauty of this unique monument of nature only from water.

What Will a Tourist See on Sagan-Khushun? 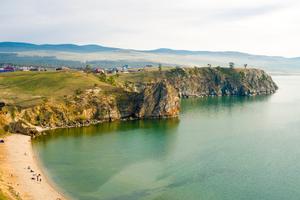 Local flora is not particularly rich. A traveler will walk along the fescue and bluegrass steppe with edelweiss and thyme, encountering solitary larches or small larch groves on the slopes. However, one can also see rare and endangered plant species: Papaver popovii , Olkhon vetch, and locoweed (Oxytropis triphylla, Oxytropis tragacanthoides, Oxytropis oxyphylloides).

It is noted that there are also colonies of the cormorant in that place; it has been noted that the number of this species on Baikal has finally begun to recover, as well as the species of herring gull, black swift and fork-tailed swift.

Just like the entire Olkhon, the Sagan-Khushun Cape is associated with a number of archaeological findings.

First of all, these are the remains of a ditch and a rampart stretching on the cape’s isthmus. Archaeologists date them to the V-X centuries AD, when the mysterious Kurykan people lived here; almost nothing has been known about that people until now. The Academician A.P. Okladnikov expressed the opinion that they could be considered the ancestors of the Buryats and Yakuts.

Unfortunately, no one knows for sure what the purpose of the walls built of natural stone was. There are no archaeological data or folklore material. Therefore, the purpose of construction of these walls continues to be controversial, incomprehensible and mysterious even for modern science.

Another notable object is the solutional cave located in the area of ​​the “Sredny Brother” (“Middle Brother”) Rock with its entrance facing the west. By the way, the researchers suggest that this cave also has two entrances, just like the well-known cave on the Burkhan Cape, but the latter is very narrow and is now closed by a large triangular stone. The fragments of ceramics found in the sand on the cave floor suggest that the ancient people of the Baikal region lived there. An interesting fact is that a finding was discovered here during excavations: a small wooden box contains an eagle buried therein.

The employees of the Pribaikalsky National Park, on the territory of which Sagan-Khushun is located, recommend to visit the cape as part of excursion groups, and, best of all, to look at the cape from the water.

One can climb the Sagan-Khushun Cape from the coast along a path in the southern part of the cape and from the Sagan-Khushun Bay located further north, whereas the only and very steep path descends to the foot of the Three Brothers.

Many think that the main attraction of the cape is actually the view that opens from the top of the cape to the Maloye More, the island of Olkhon, the Primorsky Range. It is claimed that in good weather, both the eastern coast of Lake Baikal and the extreme northern point of the Olkhon Island - Cape Khoboy - are perfectly visible from there.

The option of visiting Sagan-Khushun in winter is not less beautiful: during this season the rocks are covered with ice for many meters upwards and literally sparkle in the bright rays of the winter Baikal sun.