The Enchanted Coast: Enkhaluk and Its Surroundings

The word “Enkhaluk” translated from the Buryat means “blessing”. The village of Enkhaluk is really one of the most blessed places on the coast of Baikal… We will tell you about the places that you should definitely see there.
Первый Байкальский

One can travel around Lake Baikal without interruption. Today we invite you to visit the interesting and underexplored coast of the lake proximal to Buryatia. We are speaking about the village of Enkhaluk, where the endless lively beaches are situated next to pristine nature, and the water is not only crystal clear, but much warmer than in other places: sometimes it warms up right up to + 26 degrees Celsius.

The eastern coast of Baikal is much more suitable for full-fledged beach recreation and swimming than the western one. Naturally, if you get tired of lazy sunbathing, there are many alternative activities.

The “Buryat” part of Baikal has many outstanding places with excellent recommendations from those who have already had rest there.

The village of Enkhaluk is located In Kabansky district of Buryatia, to the north of the delta of the Selenga River, about 6 km away from the legendary Proval Bay. It appeared more than sixty years ago. Before that, the eponymous settlement was situated in a different place. In 1950s they began to talk about the risk of the territory sinking underwater in connection with the construction of the Irkutsk hydropower plant. Then the question came up concerning the relocation of village residents: as a result, modern Enkhaluk appeared. There was no flood then, so the small first settlement of Enkhaluk has been preserved until today.

Even 20 years ago the modern Enkhaluk was a settlement typical of the Russian depth of the country. There were shabby fishermen’s houses, no road, instead, there was only one ferry crossing. However, at the same time, the place could boast of excellent fishing, undaunted forest game, the riches of the centuries-old taiga: berries, nuts, mushrooms... Fishermen and hunters were the first to come here; they were followed by the fans of independent recreation, and then the oil producers built their industry-sponsored tourist center where their employees spent their holidays.

Soon enough the most beautiful Baikal landscapes, sandy beaches, well warmed-up coastal waters began to attract more and more admirers. As a result, there are virtually no indigenous local inhabitants left today. The majority of the population is made up by vacationers. So the size of the modest village grew several times, due to newly built country cottages and buildings. Once again people started to talk about the “old” and “new” settlements with the name Enkhaluk. This time the emergence of these names had completely different reasons, as compared with the last century. Now “New Enkhaluk” (“Novy Enkhaluk” in Russian) is the Buryat “Rublevka”, a high-class recreation zone.

All the local nature is full of serenity: the thickets of pines and larches bordering the sandy beach, the pleasant water of Baikal, and the hot air “diluted” by the freshness of the sea lake. Therefore, it is surprisingly comfortably cool here even during the heat! All this bliss corresponds to the name of the place - Enkhaluk. Indeed, in Buryat language, “enkhe” means “serene, blessed, calm”.

Russian settlers have called this land by an equally lyrical name since ancient times: “The Enchanted Coast” or “Podlemorye” (“a place near the sea”).

One of the Most Popular Holiday Destinations on Baikal 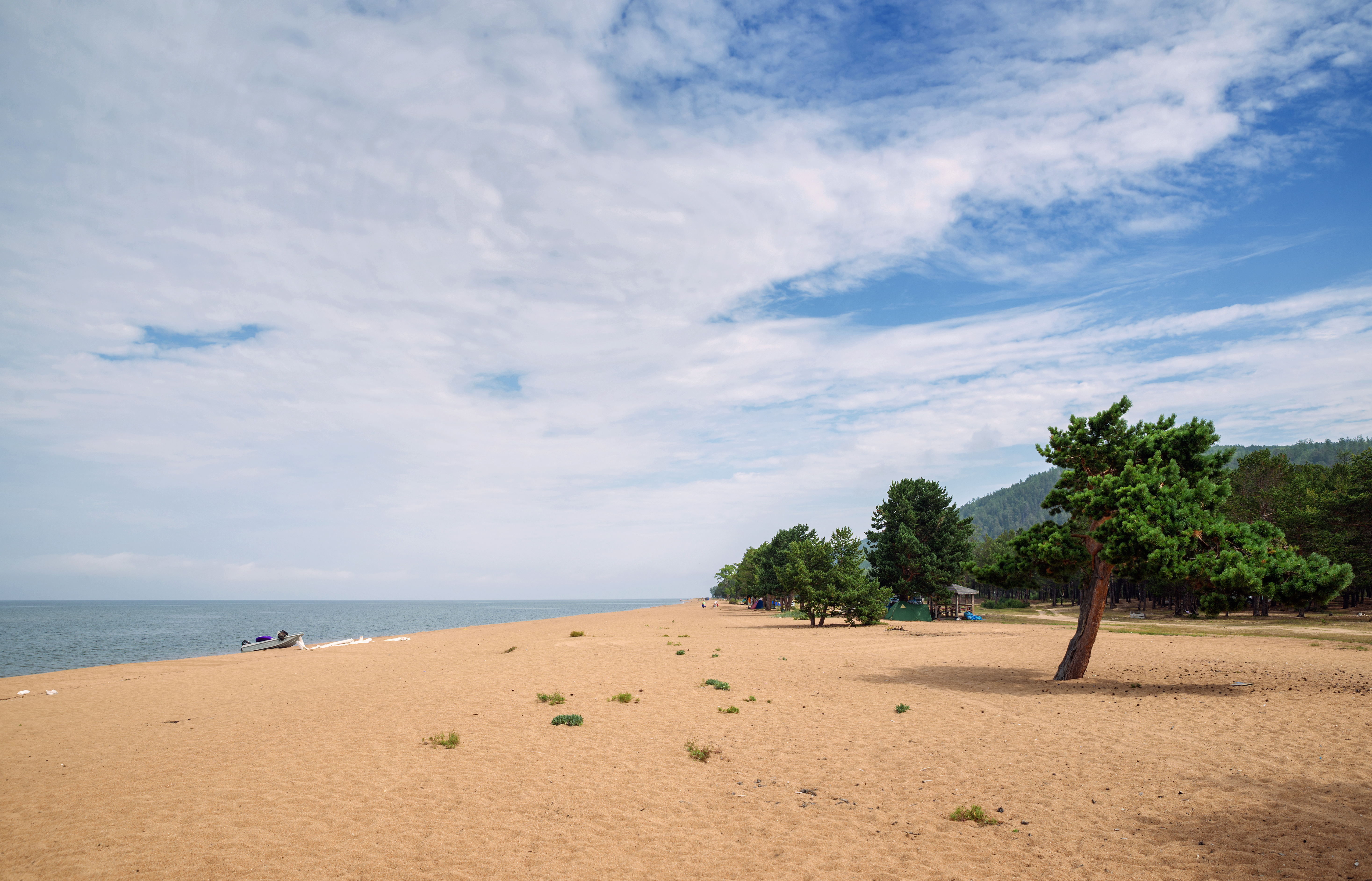 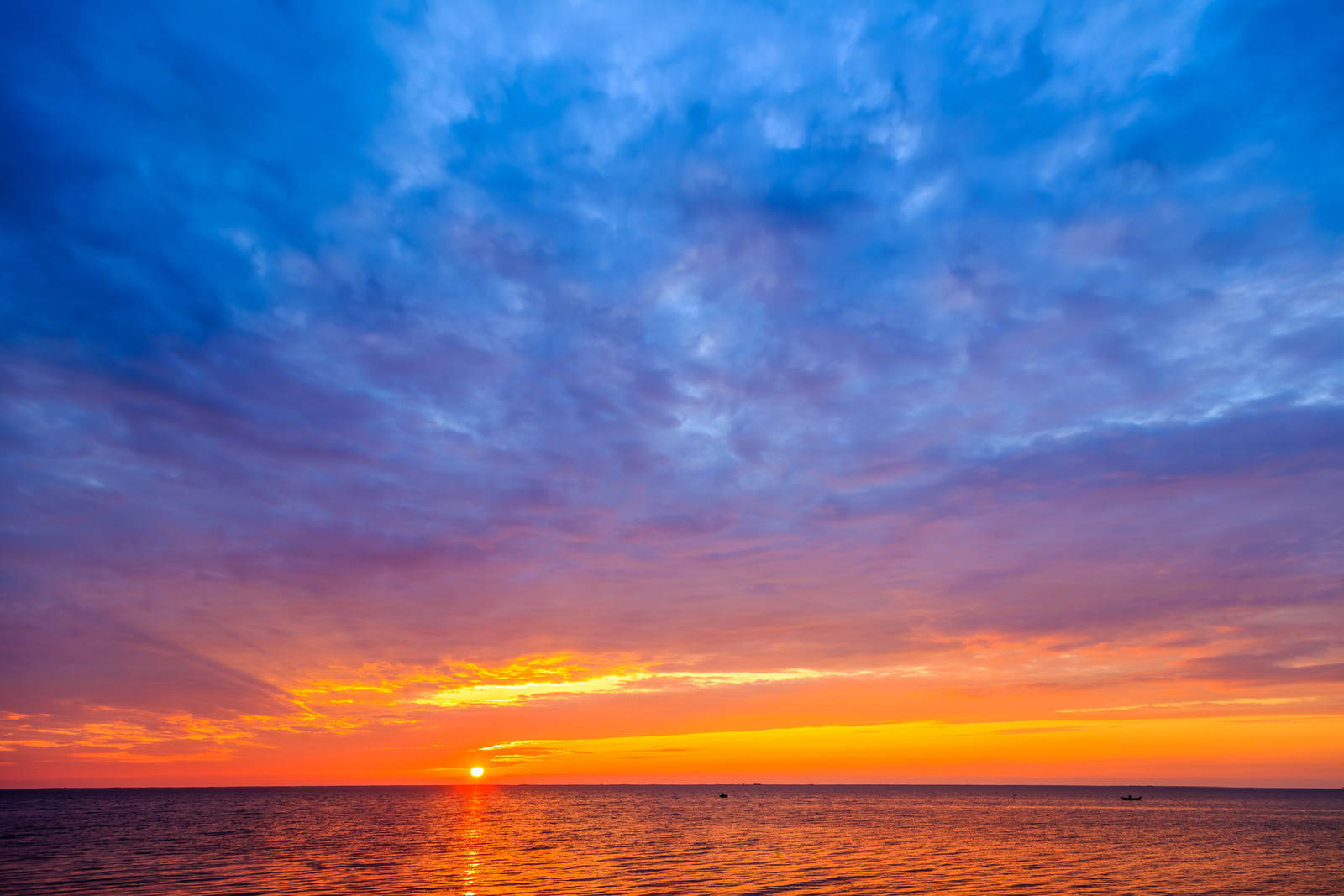 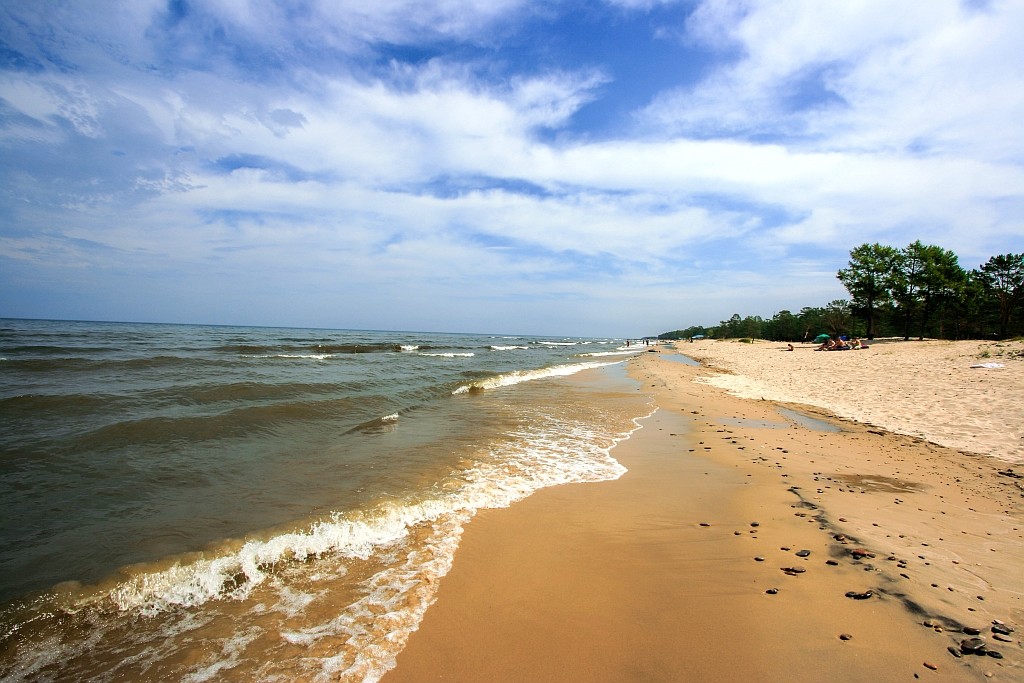 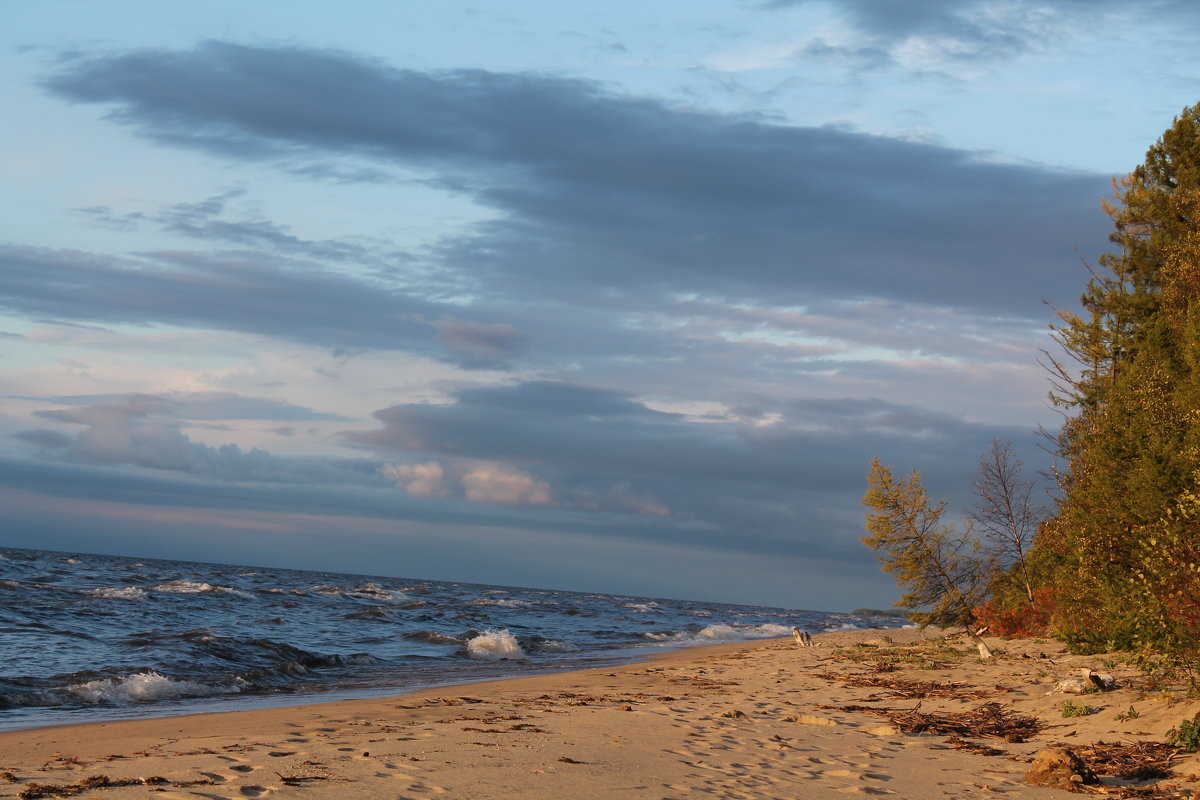 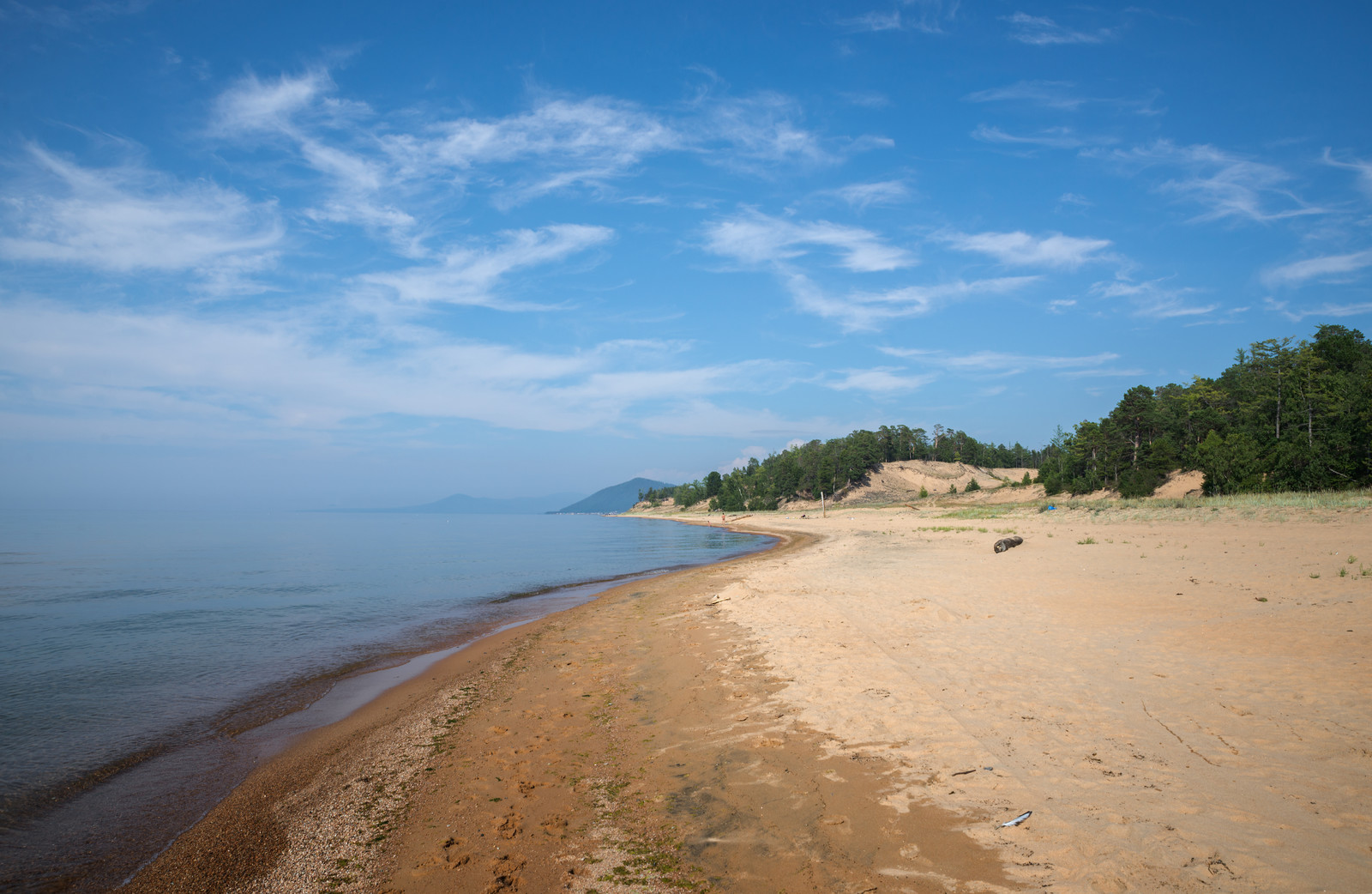 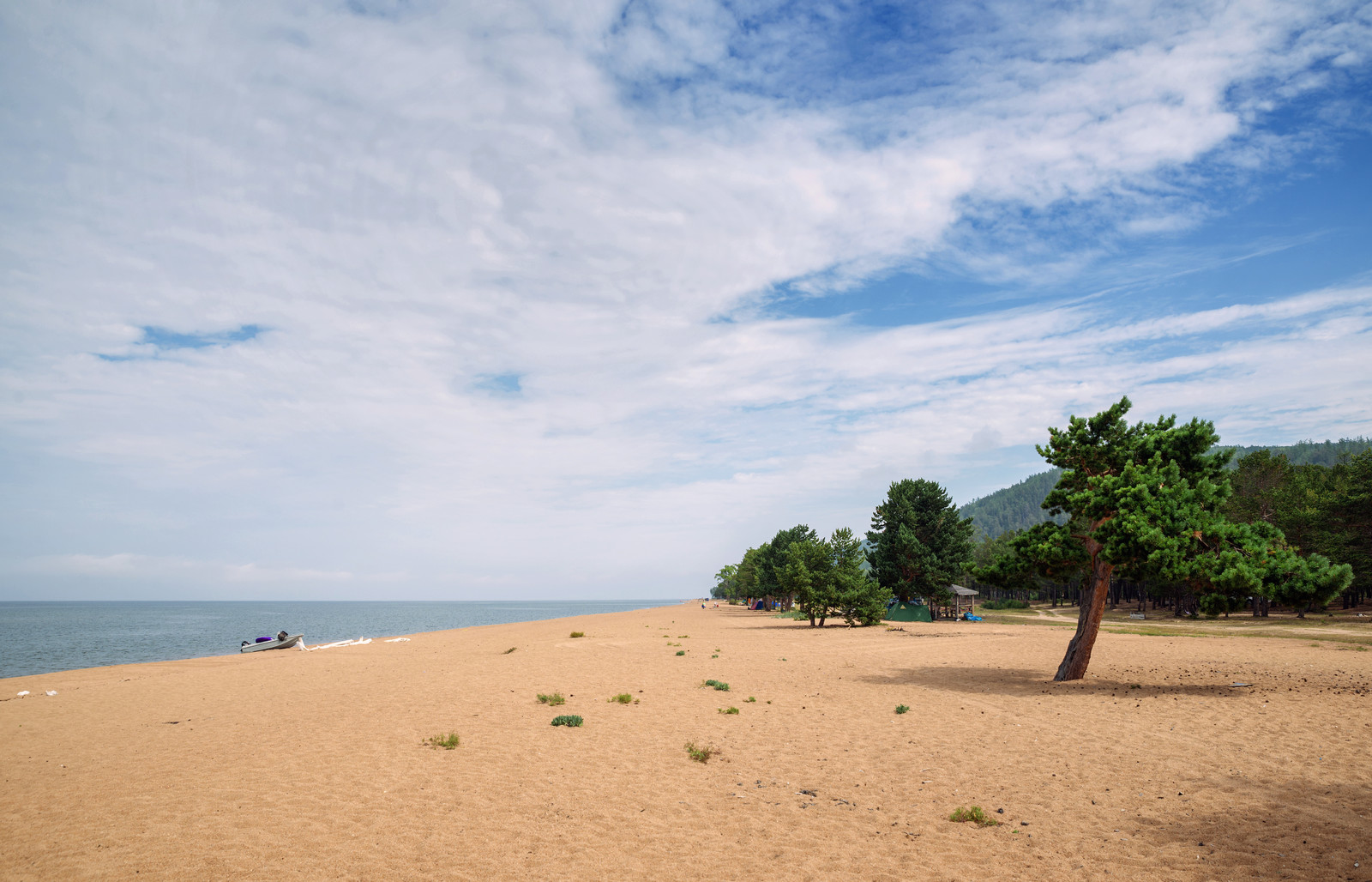 Thousands of tourists rush to Enkhaluk in summer, naturally, one may ask: what does attract them so much? The answer is:

- the unique beauty of this coast of Baikal. Enkhaluk truly rewards its guests with various types of vegetation, and its flat coast beneficially complements the steep slopes covered with vivifying taiga trees. The most romantic travelers state that “they wish to catch the sunset here: then a fiery red path of solar light will reach from the horizon to the coast”;

- a stretch of coastline, about 10 kilometers long, covered with fine white sand. The local beach is rightfully considered to be one of the most attractive places for recreation on Lake Baikal, competing with the Maloye More Strait. In addition, the crowns of forest form a shelter from the scorching sun, protecting the beach from heat;

- an opportunity to dive into the water of the sea lake, which will relieve fatigue, free your mind from heavy thoughts, elate you. The coast of the Enkhaluk village is characterized by the presence of shallow bays where the sun rays reach to the bottom, thus warming the water surface and creating all necessary conditions for swimming;

- the presence of “pristine”, not urbanized places, making it possible to immerse oneself into the silence and tranquility of the Baikal nature;

- an opportunity to get acquainted with the flora and fauna of the Enkhaluksky game reserve: the village itself is located on its territory;

- the prospect of diversifying the beach recreation by climbing the Morskoy Ridge, hiking and horseback riding in the taiga, collecting ferns, mushrooms and berries, fishing, hunting, photo tours, exciting tours to nearby attractions.

We will tell about these attractions.

Having passed only 8 kilometers from Enkhaluk towards the village of Sukhaya, anyone can plunge into the hot healing mineral springs, and enrich their vacation with recreational sessions.

Sukhaya is a place, a village, and a river.

Sukhaya is not as crowded as Enkhaluk, but it has the same pure Baikal water, sand dunes of large beaches, and a pine forest.

The village is located near the mouth of the Sukhaya River.

There is a small, but peculiar museum “Omul Baikal” in the village: it was established in 2005. Today it is the result of creativity of local residents: it has become a kind of brand of Kabansky district. This maritime museum is dedicated to the development of fishing on the lake, and it welcomes all tourists who wish to see the original exhibition of authentic household items, including fishing and hunting. The museum’s exhibition contains: a unique 17th-century weather vane- church banner with the face of the Savior - Baikal sailors put such banners on their masts; a marine compass and a boat lantern with two handles dated by the beginning of the 20th century; a fisherman's boat made with the use of cedar at the beginning of the 20th century...

Speaking about the restored items, one cannot but pay attention to the layout of the fixed net used for fishing on Baikal (a fixed net is a fishing tool with its principle of operation based on the installation of a fixed wing obstacle on the way of fish, which leads the catch into a trap).

If someone decides to stay in Sukhaya for a few days, it will be easy to find accommodation at a tourist center. There are plenty of such centers. Depending on your needs and financial capacities, everyone can choose a suitable option. 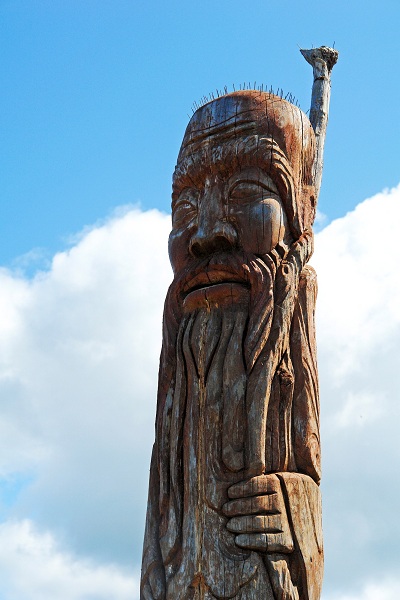 On a high hill near the road, just next to the Dulan Ulus (“ulus” means a “settlement of nomads”), you can see one of the unique attractions of Baikal - a wooden statue 3.5 meter high; it was created Anatoly Tsydenov.

The settlement of Dulan is located on the southeastern coast of the Bay of Proval and will celebrate its 155th anniversary in July 2019.

Tourists’ attention to Dulan is constantly increasing. Indeed, it is no accident. The surroundings of the ulus are famous for the beautiful nature that remained almost untouched by man, with wealth of color and a fragile ecosystem. That is why this corner of the Baikal nature has the status of a World Heritage Site.

Besides, one of the highest water temperatures on the entire lake is observed in Dulan. After all, “dulan” translated from Buryat means “warm”. There are no harsh winds and freezing winters here, since the ulus is located in a zone of a kind of coastal climate created by the fact that the village is surrounded by ridges overgrown with dense forests and by the influence of Baikal.

In 2006 they built the figure of the Spirit of Baikal in this remarkable cult place of worship of the Buryat shamanists; there are nine sacral figures at the foot of this statue: these are the Spirit’s mythical servants, which include the sacred bull.

According to ancient legend, Usan-Lopson is the supreme Master of Waters. He is of heavenly origin and has a high status in the hierarchy of local deities. Together with his wife Usan-Daban and his servants, Usan-Lopson lives at the bottom of the great sea lake, protecting its purity.

A real residence was created for this Master here on the outskirts of the Dulan Ulus; the place for it was consecrated by shamans during a special ritual.

Everyone who comes here should remember that the Spirit of Baikal will guarantee good luck and good weather on the lake, if you make an offering to him, “according to the Buryat traditions” – you should bring milk or vodka.

The village of Fofonovo is famous for being a necropolis of the Neolithic epoch with about a hundred investigated extremely original burial grounds, as well as a sacred birch grove where, according to an old legend, one of the seven main gods of Buryats with an extremely strange name - Ivan Timofeevich – is living. It is believed that this name belonged to the Russian posadnik (governor) who established honest rules of life in these places.

The Enkheluk Terrace is a rare natural monument that includes lake-delta deposits, dunes covered with forests and a prominent sandy beach.

An outstanding geological natural monument with an area of about 3 square kilometers is located near ​​the village of Inkino. The emergence of such a large landslide is explained by a strong earthquake with a score of 9-10 points that occurred approximately 300-500 years ago. As a result, a part of the Kudarinskaya Terrace with a height of 18–20 meters “slid down”.

How to Get to Enkhaluk

You can reach Enkhaluk from Irkutsk and Ulan-Ude.

If you start your journey from Irkutsk, it is possible to get to this beautiful place on a private car, bypassing the capital of Buryatia. The distance from the city to Novy Nekhaluk (New Enkhaluk) makes up about 430 km. If this option is not suitable for you, you will have to get to Ulan-Ude by airplane, or by train, or taxi, or bus.

The distance from Ulan-Ude to Enkhaluk is about 170 km. You can take shuttle buses and taxis from the railway station: they will deliver you to your place of destination along a good quality highway.