We continue to introduce extraordinary Baikal villages to you. This time the topic of our section will be the village of Maksimikha. We will tell why it has the best climate on the eastern coast and due to which reason you should beware of local marshes.

A Village, a River and a Beach

The eastern coast of Lake Baikal is not as popular as the opposite one. This is good and bad at the same time: crowds of tourists come here less frequently, it is much easier and cheaper to find accommodation, but the infrastructure is worse, it takes longer to get there. One cannot say that Maksimikha is an untouched corner on the coast of the Great Lake. This is a tourist village with a flow of guests growing year after year.

Maksimikha is a small village in Barguzinsky district of the Republic of Buryatia. It is inhabited by 300 people; this number can grow three times during the tourist season. The same name also belongs to a small river flowing into Baikal: the village is named after this river. The river is quite small, but its water catchment area makes up 444 square kilometers!

The village is located on the coast of the Barguzinsky Bay that is protected from the cold winds of Baikal by the Svyatoy Nos peninsula in the north and by the Maksimin Cape in the south. Due to this, the microclimate in this place proved to be more comfortable than in many other places on Baikal. The hot sun warms the water and sand pretty well, at the same time the freshness of Baikal does not allow the heat to turn into sultry weather. In winter, the average temperature here is warmer here than on the coast.

By the way, let us talk about the sand. The longest beach on Lake Baikal is situated here. It stretches almost along the entire bay that is also the largest and deepest bay.

What Is to Be Done? 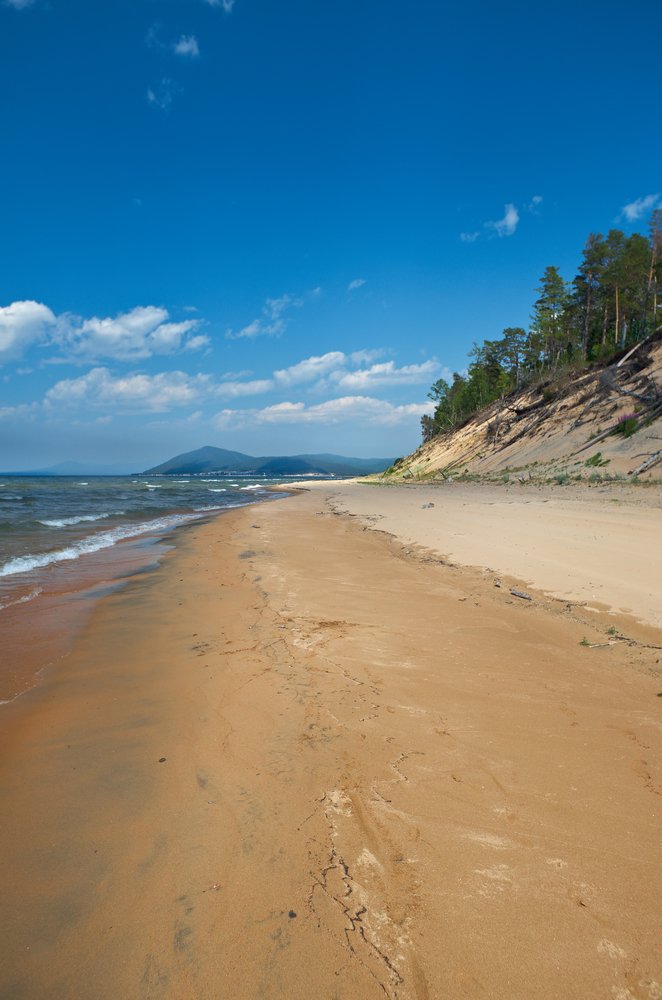 In the first place people come here for the sake of suntan: it can be received quickly, just like elsewhere on Lake Baikal, but the most comfortable conditions for this can be found in this place: a clean and beautiful beach and no wind.

Maksimikha is surrounded by picturesque forests protruding into the beach. Just walking around them is already a kind of meditation. You can see fishing boats along the coast every now and then: these look as if they were taken from the last century, which makes the coast all the more atmospheric.

You should not go deep into the forest, because these places are still pretty wild. In autumn the local forests are a real treasure trove of mushrooms and berries. Various medicinal herbs grow along the coast and far away from it. If you go north along the coast, you can get to the “Svetlaya Polyana” Museum Park. This is a specific museum-hotel complex made of wood. The buildings are constructed in the style imitating the buildings of the XVII century prison. By the way, Barguzinsky district was reclaimed by explorers quite early, first of all, because of the sable living here.

The museum park has an Orthodox chapel built without nails, residential houses in the old-time style and a Russian bath. The houses contain expositions devoted to indigenous peoples - Buryats and Evenks, as well as to the everyday life of the Cossack pioneers.

By the way, you can put up for the night in this museum complex and feel like a pioneer.

There are excursions from Maximikha to the Ushkanyi Islands - the habitat of the Baikal ringed seal, as well as to some other places. Boats stand along the coast, and you will surely be unable to miss them. If you do not want to pay much money for the tour, you can try to wait for the ringed seal on the beach: sometimes they show up near the village. For this purpose, it is better to go to the coast in the early morning when there is no noise of boats and holiday cruiser.

A peninsula with an unusual name - Svyatoy Nos (“Holy Nose”) - is situated to the north of Maksimikha. Originally, only one of the capes on the peninsula was called so. The Buryat name of the Svyatoy Nos is Khilmenkhushun, which means “a sturgeon's muzzle”.

You can and should visit Svyatoy Nos, if you want to see the awesome beautiful view of a sandy beach slipping away, endless taiga and, of course, Baikal.

To be able to see all this, you need to allocate more time for hiking. First you should ride to the peninsula by some transport (because the distance is about 60 kilometers), then climb the mountain.

Svyatoy Nos is a part of the Zaybaybalsky National Park, so there are many endemic species of animals and plants there. The famous Kulinye marshes are also a part of the park: mineral springs come up from under the ground there. Walking through these swamps is dangerous not only because you can drown, but also because of gas poisoning. It is better to look at them from a distance.

There are also safe mineral springs and arshans around Maksimikha; some of them flow into Baikal.

Maksimikha is situated quite far away. The way from Ulan-Ude can take three and a half hours. You can get there by public transport or private car. The option with the car is preferrable because it will make it possible to look at the sights at a short distance.

The village has many guest houses and hotels, some of them offer a view to Baikal. The level of service is different, just like the prices. Some hotels are located right near the coast.