Ice Transition and an Unexpected Journey through the Circum-Baikal Railway

Our readers Pavel and Alina Yakusheva have already been participating in the ice transitions on Lake Baikal for several years. This year Pavel has shared with us his story and photos telling about the way the “Meeting with Lake Baikal – 2018” has been held and how a missed train allowed them to discover the Circum-Baikal Railway.

We participated in the ice transition in 2017 and knew the route that were prepared for us: an electric train from Irkutsk to the station of Temnaya Pad, a three-kilometer descent to the coast, to the railway station of the Circum-Baikal Railway called Staraya Angasolka, a transition on the ice of Baikal with the finish line in the town of Slyudyanka, and then a train back to Irkutsk. This is the most popular route chosen by organized groups that travel this way several times in March, when the weather is favorable for such transitions.

Despite the fact that an ice transition is not a very difficult test, but still one has to be prepared:

The shoes must be waterproof. Baikal in March means a lot of puddles on the ice surface. In addition, a small river flows between Temnaya Pad and Angasolka, and this will be a serious test for your shoes. We’d advise you to take extra socks.

Warm clothes. Despite the heat and scorching sun reflected from the snow, you can encounter the cold Baikal wind along the entire route.

Drinking water or tea in a thermos. When you walk a long time and feel hot, a sip of water or tea will help you regain your strength.

Cash. If you are going to perform an ice transition, even if you go in an organized group and your tickets have been bought in advance, you need to have some spare money. They may come in handy at the station of Staraya Angasolka where people arrange paid entertainments for the participants of the transition and offer to buy grilled meat (“shashlik”). If you doo not spend money there, then they can be spent in Slyudyanka to buy food, drinks or Baikal souvenirs, plenty of which are sold there.

Do not take too much luggage. You are not going to conquer Everest, so you do not need to take a tent, a flashlight, a rope and a bunch of other devices. The fewer things you take, the easier your travel will be. 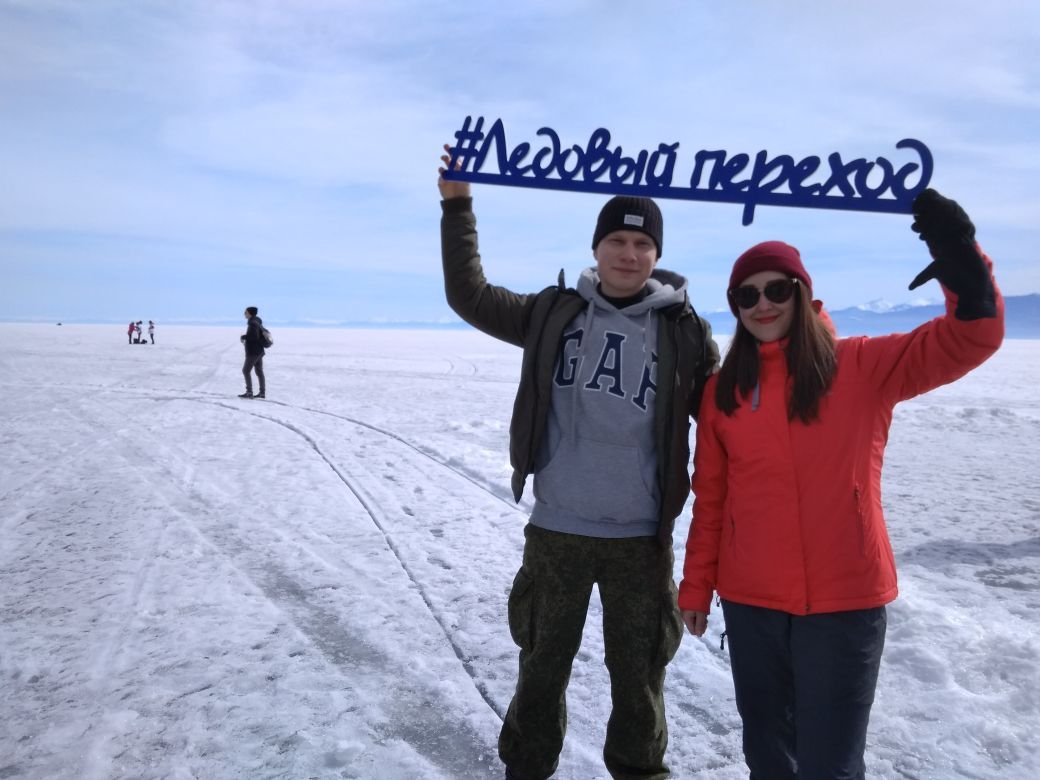 Even if you are well prepared and have foreseen everything, you can get into an unexpected and unpleasant situation. We missed the train. The next electric train to the station of Temnaya Pad departed only the next morning. We could abandon the idea of transition or look for other ways to get to Temnaya Pad or Staraya Angasolka. We chose the second option.

We opted for the following alternative route: we took a shuttle bus to the village of Kultuk and then walked along the sleepers of the Circum-Baikal Railway to Staraya Angasolka, where we had to meet the rest of our group.

We got to Kultuk we got faster than the train did, although we started our way much later. We spent a little time on our way to the station, and went along the railway to our destination point.

As we learned later,: we could come out from the shuttle even earlier, near the station of Temnaya Pad, and get to Staraya Angasolka even faster.

The way from Kultuk to Staraya Angasolka makes up 8 kilometers. This is a single-track section of the Circum-Baikal Railway on a narrow slip of the earth between the rocks and Baikal with several small bridges and tunnels. The capes protruding to Baikal make the road curved. The chance to be run over by a train on the Circum-Baikal Railway is low, but still we listened to any noise along our way.

The buildings on the Circum-Baikal Railway have an antique look, many of them were built more than a century ago. Along the way we met cows that somehow managed to climb on sheer rocks and dogs that seemed to guard the half-abandoned ways. The sun at noon was so hot that after an hour on the road the right side of the face turned towards Baikal was literally burning.

However, it was not always possible to admire the ladnscape, because we needed to look under our feet every now and then, so that not to stumble. Walking along the sleepers is not very convenient, especially when you are in a hurry. The winding road offered us hope that Staraya Angasolka was just around the corner, but each time we were mistaken. However, after an hour and a half we got to the place where our group stopped: they were already eating buckwheat with canned stewed meat from the field kitchen. It should be noted that we were in such a hurry mainly because of this wonderful buckwheat: the dish seemed to be much tastier there, at Baikal.

Our Meeting with Baikal 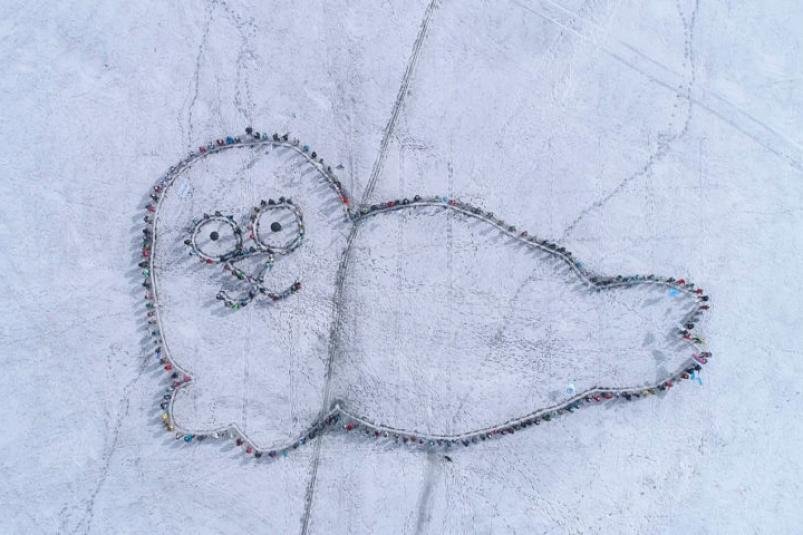 Just like in the past year, the participants of the transition were entertained, fed and then gathered for a group photo. The tradition of the transitions was the alignment of its participants in the shape of something connected with Baikal. Last year we formed the most sacred sea, this year - an enormous ringed seal. After that, we went one after another in the direction of Slyudyanka.

This year the route passed along hummocks and other ice obstacles, so it was easy to walk and enjoy the surrounding landscapes: the sunlit peaks of the Khamar-Daban mountains, the ice desert stretching off into the distance and hot weather at the same time. This strange combination was not the only one. It is rather unusual to see such a large flow of people, snowmobiles and cars in the middle of the icy Baikal. In addition to snowmobiles and cars, which were mostly life-saving (just in case), skiers ran by every once in a while.

If last year ice crackled under our feet, this time it was firmly quiet and calm. There were practically no thawed spots.

In Slyudyanka the participants of the transition were treated with cookies shaped as the omul fish, and a train that later brought us to Irkutsk also waited for us there.

The ice transition - 2018 has also become our first meeting with the Circum-Baikal Railway, and we have never regretted this. It is a pity that the next transition will take place only in a year; see you in 2019, the icy Baikal!