How Tourists Appeared on Olkhon

According to the statistical data, a million tourists have come to Baikal for the last two years. The rest on Olkhon becomes not only more popular, but also rapidly expands the geography of visitors: they come here literally from all over the world. We pondered upon it: when did the tourists first appear on the island? Who were they? Why did Olkhon become so popular?

The First People of Olkhon

People have lived on Olkhon from ancient times. Scientists claim that Kurykan tribes lived here, and then, in the tenth century, Mongols came here and assimilated with them: thus the Baikal Buryats appeared. However, active populating of the island has started only relatively recently, in 1930-s. It is known that by the beginning of the twentieth century the population consisted exclusively of Buryats, about a thousand people lived mainly in the ulus called “Sem Sosen” (“Seven Pines” in Russian). The first attempt of Russians to settle on Olkhon failed. In winter of 1932 about fifteen families came here by ice from the Trans-Baikal Territory with the intention of setting up a collective farm. They spent the winter in dugouts, in spring they started to plow the land and then found out that the fertile layer on the island was too thin and not suitable for cultivation. The most part of this community soon left Olkhon.

People on Olkhon traditionally lived by fishing, so the big bosses quickly realized that this could be a profitable production. At the same time, in 1930s, the Irkutsk Fish Group opened five fish receiving stations, but soon decided that it would be easier to build a fish plant right there on the coast; so the plant was built in 1937. An interesting fact is that this was reflected even in local names. For example, the name of the GSM Gulf existing until now is a Russian abbreviation for “combustive-lubricating materials”. Huge tanks were built directly into the steep coast of the bay:  they served to refuel fishing boats that approached the tanks by water.

The Sarayskaya Gulf had a “karavanka”, a wooden hangar for repairing simple boats and motor-boats (large boats with a stationary engine). At about the same time a correctional labor colony for family members of the enemies of the people was built in Peschanka. It did not exist for a long time: in 1950-s it was transferred to the mainland, only the canning shop built by the Balts remained. The industrial boom populated the island: 27 nationalities lived and worked here by the end of 1950-s, about three thousand people lived in twelve settlements. Since then the population has only decreased, and by 1980-s it halved. The same years were the time when the first tourists appeared on the island.

As the old-timers recall, the “path finders” of the land were Balts. They were mostly students, the children of those prisoners of the correctional labor colony who left to their home after their imprisonment was over. They came with backpacks and put tents on the coast of the Saraysky Bay. By the way, there was a magnificent pine forest around the bay at that time. The Head of the library Lyubov Kirilchuk recalled that her grandmother picked up mushrooms and berries in that forest, she stored cowberries for a year ahead; willows, wild rosemary and clematis also grew there.

The First Tourists on the Island 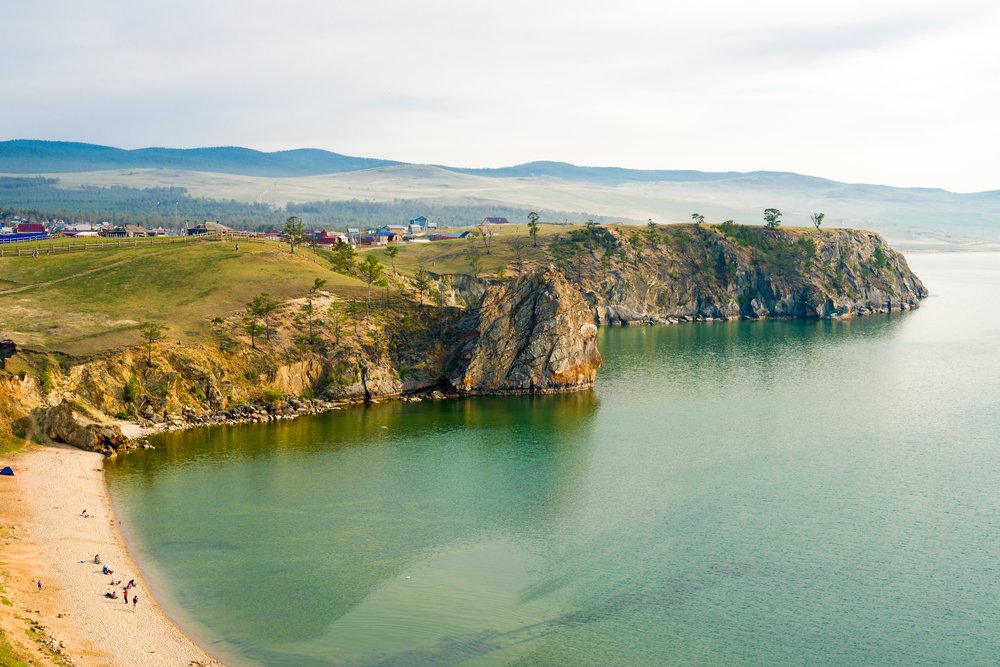 It is interesting that you can exactly determine both the time of beginning and the names of the founders of both mass and foreign tourism on Olkhon. In early 1990-s two professional athletes arrived on the island and established the first tourist centres there: these were Nikita Bencharov and Sergei Grudinin. First, thanks to them, tennis and volleyball appeared on the island: “the new residents of Olkhon” opened sports clubs at the local school: a whole generation of indigenous islanders has grown training in these clubs. Soon, friends and colleagues began to come to those two athletes, mostly from other countries: they were French, Japanese, Koreans. Thus there was a paradox: tourism on Olkhon first became popular among foreigners. In those wild times the residents of the regional centre did not yet have a fashionable way to spent vacations, going to Lake Baikal for a weekend. They had simply nowhere to go: tourist infrastructure was completely absent. But the foreigners liked this “primitive lifestyle” and the fact that the island was isolated from civilization, being “exotic Russian suburbs” for them.

But the true beginning of mass tourism can be considered the time of arrival of civilization to Olkhon: in 2005 a centralized power supply cable from the mainland was taken to the island through the bottom of Baikal. The owner of a small private tourist centre Anna Olkhovikova recalls that earlier the island only had a small electrical substation. That’s why the light was switched on in a stiff austerity mode: only from 5 p.m. to midnight. It was only enough to turn on one light bulb and a TV-set.

When the electricity appeared on the island, infrastructure started to be developed. First, the residents realized that this could bring money, and began to put summer guest houses in the yards of their estates. By the way, this type of service is still relevant due to the influx of tourists. Seasonal hotels also are a very common phenomenon: these are built without a foundation. As a rule, they are suitable only for summer holidays: the owners may not even live on the island, but come with a team of hired workers for the warm season. However, hard-wall guest complexes are also being built. An entire street named after Voroshilov was built behind the “Khoroshiy” department store: the street consists only of tourist centres and hotels.

The local resident Irina Ivleva thinks that at the same time the residents of Olkhon are trying to preserve their ways and their community:

Irina Ivleva: The people who were born here are locals. However, even those who have lived here for 15-20 years are strangers. I do not consider myself to be a local, although I have lived  here for eight years, gave birth to three children, and many local people do not perceive me as their own kind. I have assimilated only because my husband is a local. This boundary exists, I can see it. The village has been really renovated; life is in full swing. When I came here in 1996, to  visit my university friend, there was not a single fence around, the entire Khuzhir could be seen through. As you came out to the store, everyone knew whom you visited, everyone greeted you. Now no one knows who visits whom.

Not far from Elantsy there is a “borisan” – a Buryat shrine where you can “drip” alcohol or milk, in order to have a good road and to please the spirits of ancestors. Once there was a village at that place; at the beginning of previous century a local holy fool - foreteller Barnashka – lived there. Old people tell that one of his predictions related to the development of mass tourism. It sounded in the following way: “One day you will wake up and see as many people in the yard, as there are trees in the forest”. Now we can consider that the prediction has fully come true.