Goryachinsk - the First Resort of Baikal

We keep on introducing the unusual Baikal villages to you. The new topic of our section will be a village-resort on the eastern coast of the lake - Goryachinsk.

At that distant time when sunbathing on the beaches was not common, and “resort” was the name of a place where one could restore your health, the first geothermal springs of Baikal were discovered. According to a legend, one of the sources was opened by a hunter. His dog, injured during a hunt, recovered thanks to the miraculous water. Then the hunter tried this water himself and cured his old disease.

We do not know if this story is true or not, but according to science, the first mineral spring was officially discovered in 1767 by Eric Laxmann, and in 1772 another scientist named and described it: it was Johann Gottlieb Georgi who led a two-year expedition around Baikal. The place received the name “Turkinsky Mineral Waters”, after the river Turka flowing nearby (“Turkhene” in Buryat).

A few years later, the Irkutsk governor decided to create a resort there. Back then, medical tourism was in bloom in Europe in such places as Spa, Baden-Baden or Carlsbad (the modern city of Karlovy Vary); and the creation of a resort in distant and wild Siberia was a real breakthrough.

Truth be told, it could be called a resort by a long stretch of the imagination: the wooden structures that soon deteriorated, the absence of infrastructure and the small number of population of the region did not make a new Baden-Baden of these places.

The resort reopened in 1810, when the building for the balneotherapy or hydropathic hospital was built. In 1887 the resort was recognized as having social significance. However, even ten years later, it was not considered “comfortable enough”, judging by the documents of those times. Nevertheless, people settled around the resort, and a large village was formed here over time.

The resort began to actively develop during the Soviet era, and its basis is still presented by the buildings of this era. “Tunkinsky Mineral Waters” changed its name to “Goryachinsk” because of the temperature of the source (440 С) (the name is connected with the Russian word meaning “hot”).

The health resort has been operating until now. It can really heal people from various diseases of the circulatory system, nervous system, skin diseases. The use of the low-mineralized thermal, nitrogen-siliceous, chloride-sulphate-bicarbonate, calcium-sodium water has a positive effect on the human body. You can drink it and take therapeutic baths.

The resort also has many procedures that will not let you get bored: therapeutic mud, herbal medicine, hydromassage, acupuncture, and many things more. In general, if you want to acquire strong Siberian health, come here!

What Else Can One Do There? 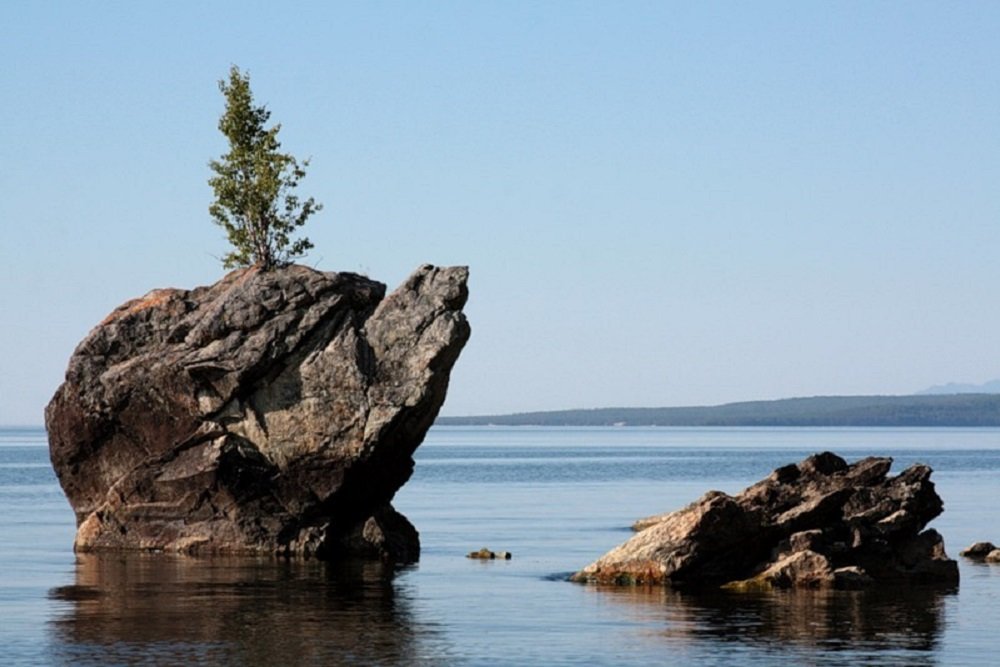 Enjoy the local nature! The village itself is not especially interesting, of course, if you did not come to see the monument to Lenin or the shops of Baikal goods.

If you approach Baikal, you will see an amazing sandy beach. The microclimate of Goryachinsk is somewhat different from the surrounding territories: it is slightly warmer due to geothermal sources and sunnier due to the direction of the winds. Local fresh ozonated air empowers those who travel there.

Walking along the coast is certainly worth trying. The beach is not sandy everywhere; it can also be covered with pebbles. There is one special place between Goryachinsk and the village of Turka among the numerous pebbles and stones. It is called the Turtle Stone. It is a huge boulder with its shape reminding a turtle that stretched its neck.

According to the legend, the Turtle protects the locals from evil spirits. As a reward for the victory over the Black Shaman, she can come to life for one night during full moon in spring.

Apparently, this legend was invented not so long ago, because the indigenous people could not know anything about turtles, because these animals never lived on the coast of Lake Baikal. However, it is definitely worth to look at this peculiar nature monument.

If you get to the village of Turka, then you can see the “Baikal Harbor” tourist cluster under construction with a lighthouse, an equipped embankment and tourist facilities. By the way, you can get a boat to the Ushkany Islands both from Goryachinsk and Turka. However, it will cost a lot of money.

Lake Kotokel is located to the south of all these places: this lake is known for a recent ecological disaster. In 2000s there was an outbreak of Haff disease that killed a lot of fish and exterminated otter. For some time, recreation and fishing on Kotokel were prohibited. The situation has improved now: there are camp sites and even a children's health resort on the lake, but Kotokel still remains dangerous; besides it is prohibited to eat local fish. Despite the sad story, the lake is incredibly picturesque, and its surroundings are rich in berries and mushrooms; by the way, these are completely safe.

How to Get There and Where to Live?

Goryachinsk and Turka are popular holiday destinations among locals, so there are always many people having rest there. In addition, visitors from Asian countries have recently begun to come here.

The place has all the necessary tourist infrastructure: guest houses, hotels, discos, souvenir shops, holiday cruisers, etc. Therefore, there should be no problems with finding accommodation.

Regular buses run to this destination. The way to Goryachinsk usually takes two and a half hours.