Baikal “Pillars”: Where a Climber Should Go on Baikal

On the occasion of the Day of Mountaineering, we will tell where you should go if you decided to visit Lake Baikal and are also fond of conquering the rocks. As you might have already guessed, here you can find the routes both for beginners and professionals.

International Day of Mountaineering is celebrated on August 8; it became a holiday in 1786. This event is associated with the first conquest of the highest mountain of the Alps - Mont Blanc.

The day of birth of Russian mountaineering is considered August 28, 1923. On this day, the students and research workers of the city of Tbilisi climbed the easternmost peak of the Caucasus - the five-thousander mountain Kazbek. Rock climbing “detached itself” from mountaineering and became a separate sport; the first competitions in it were held in the USSR in 1949.

“Key to Baikal” is going to tell you about the places on Lake Baikal that are mostly preferred by climbers. 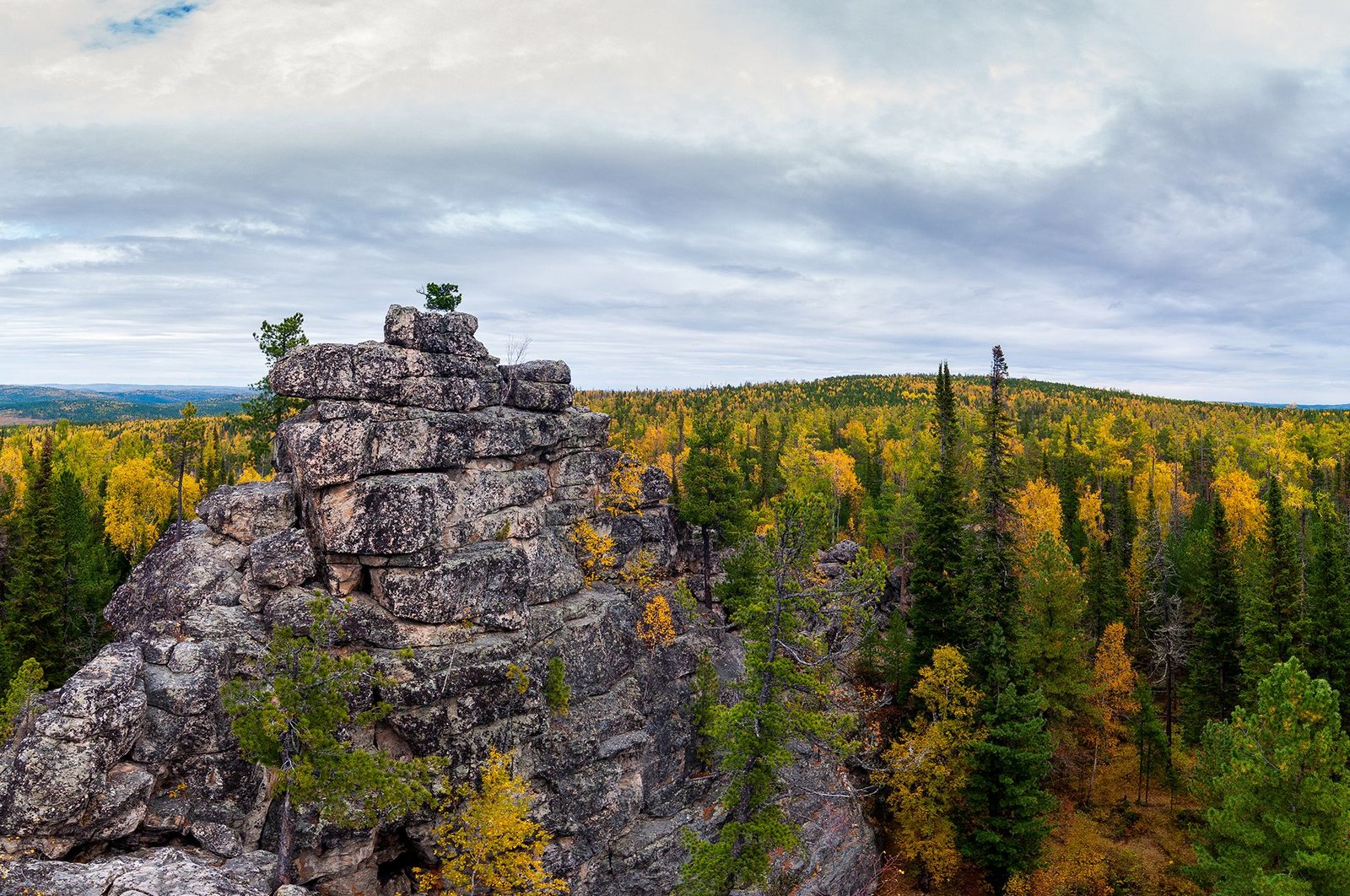 The stone soldiers of the Olkhinskoe Plateau 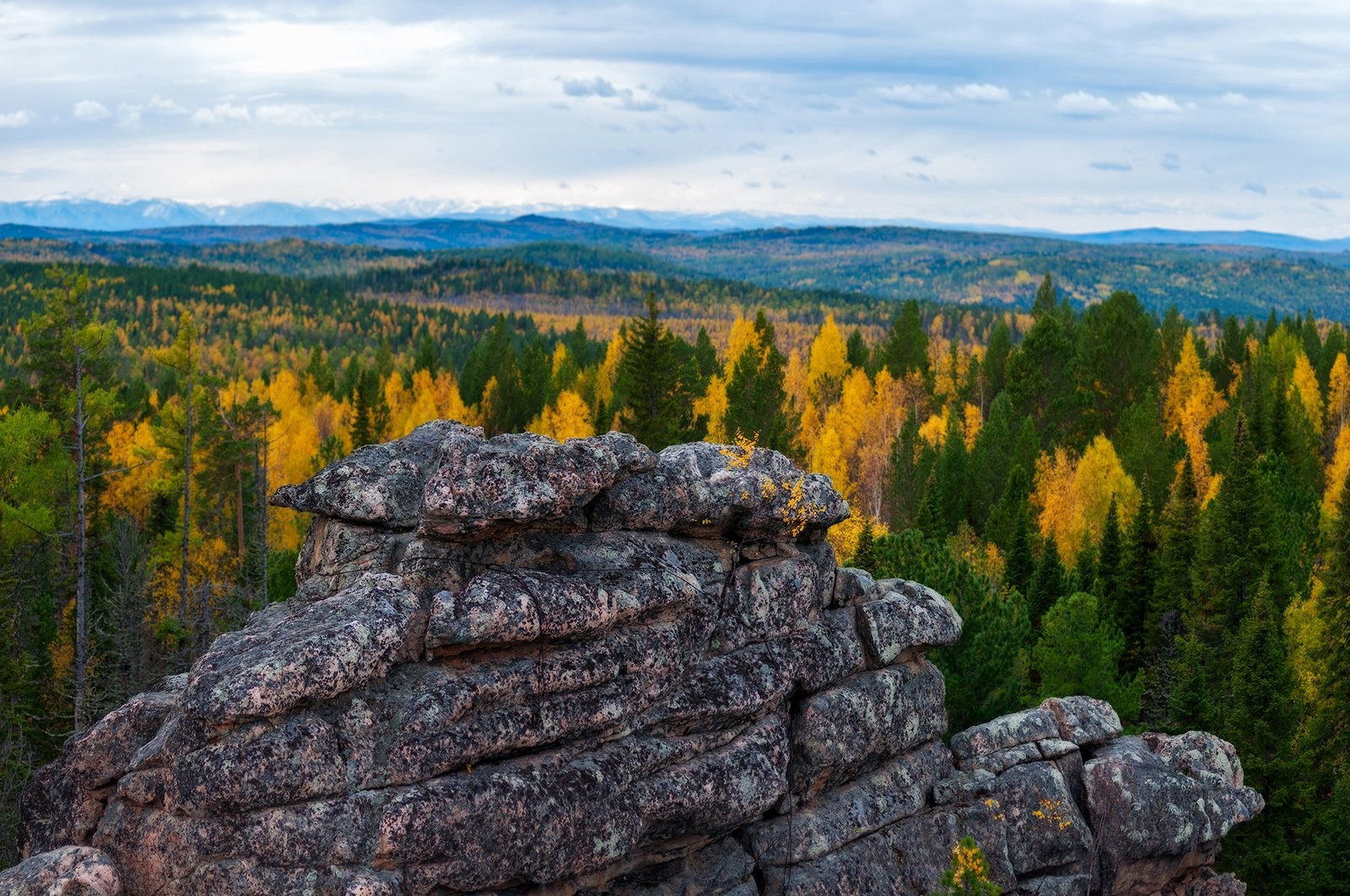 A unique plateau with the preserved rocky outcrops formed by the weathering of rocks during hundreds of thousands of years is located 60 kilometers away from Irkutsk, between the valleys of the Angara and Irkut rivers. © Photo credit: Alexey Bayfa 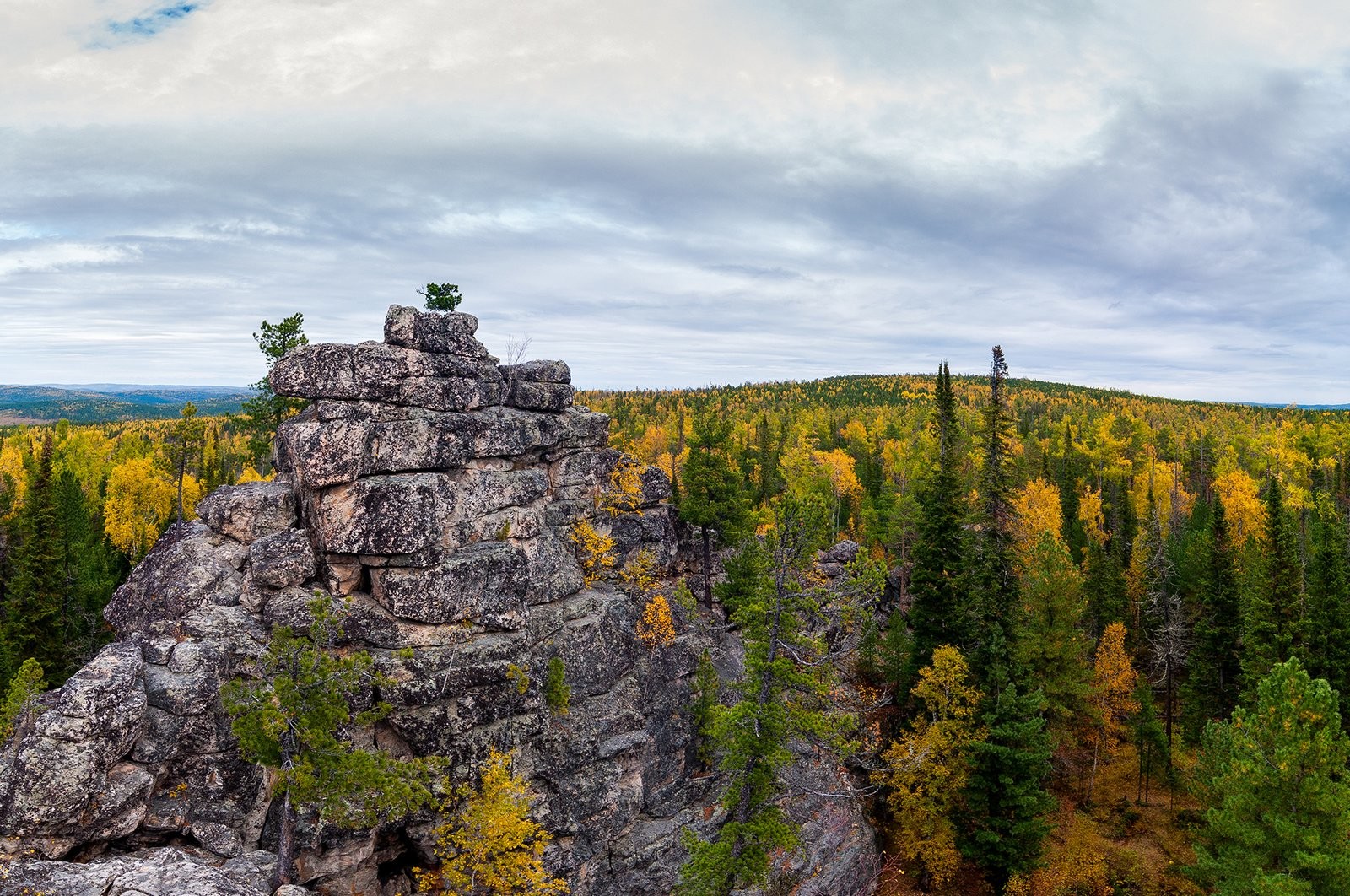 The rocks of the Olkhinskoe Plateau hang above the bed of the picturesque Olkha River like silent soldiers. Due to their unusual shape, some rocks are given names - the Old Fortress (“Staraya Krepost”), the Old Woman Called Izergil (“Starukha Izergil”), the Old Crow (“Vorona”), Pharaoh (“Faraon”), Cleopatra. © Photo credit: Alexey Bayfa A walk along the plateau may stay in your memory not only because of the rocks, but also due to its amazing fauna. This photo depicts a jay having rest on one of the ancient stones. © Photo credit: Alexey Bayfa 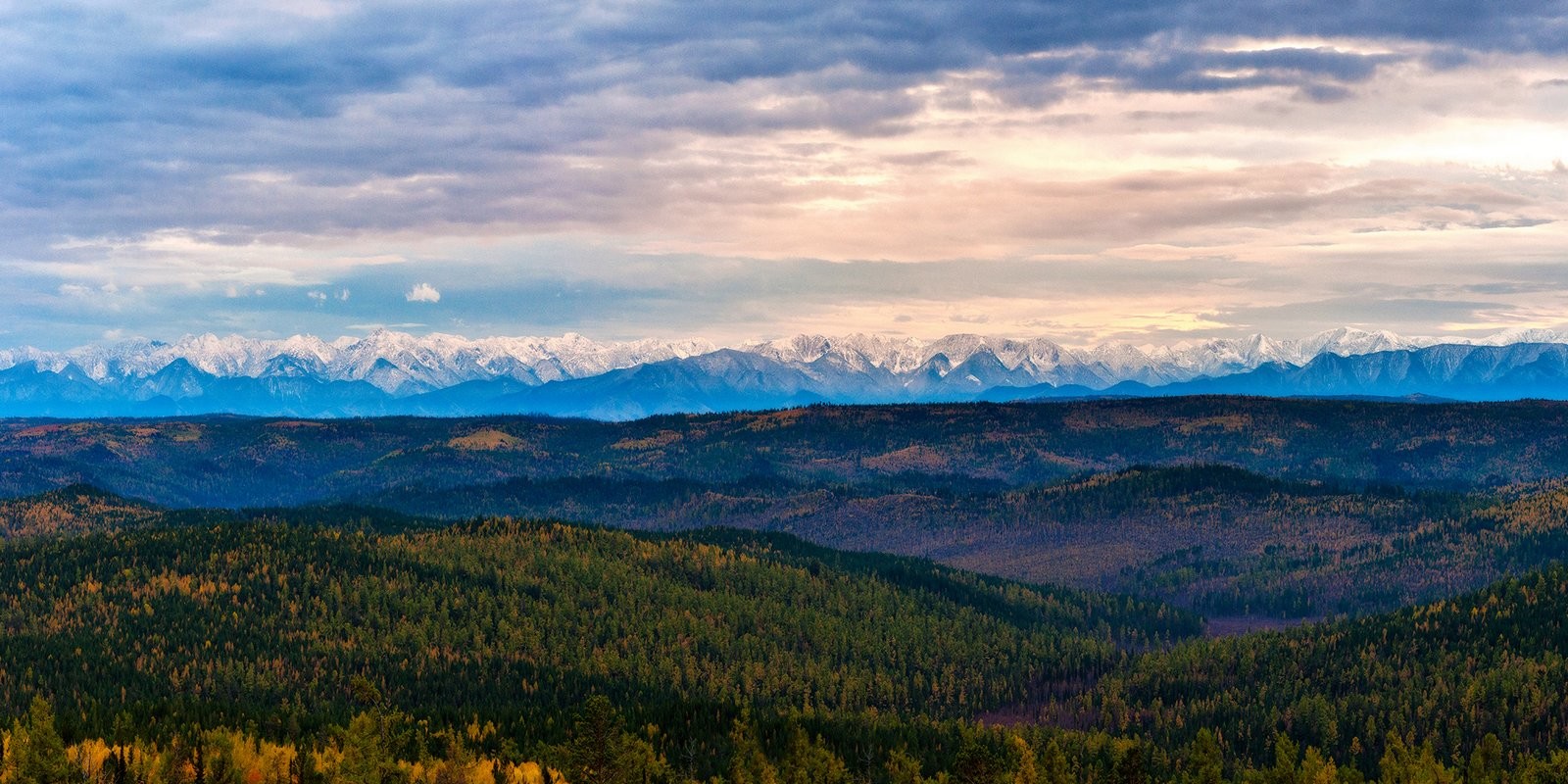 The Olkhinskoe Plateau is the perfect place for walking, because getting here from Irkutsk is very easy. © Photo credit: Alexey Bayfa 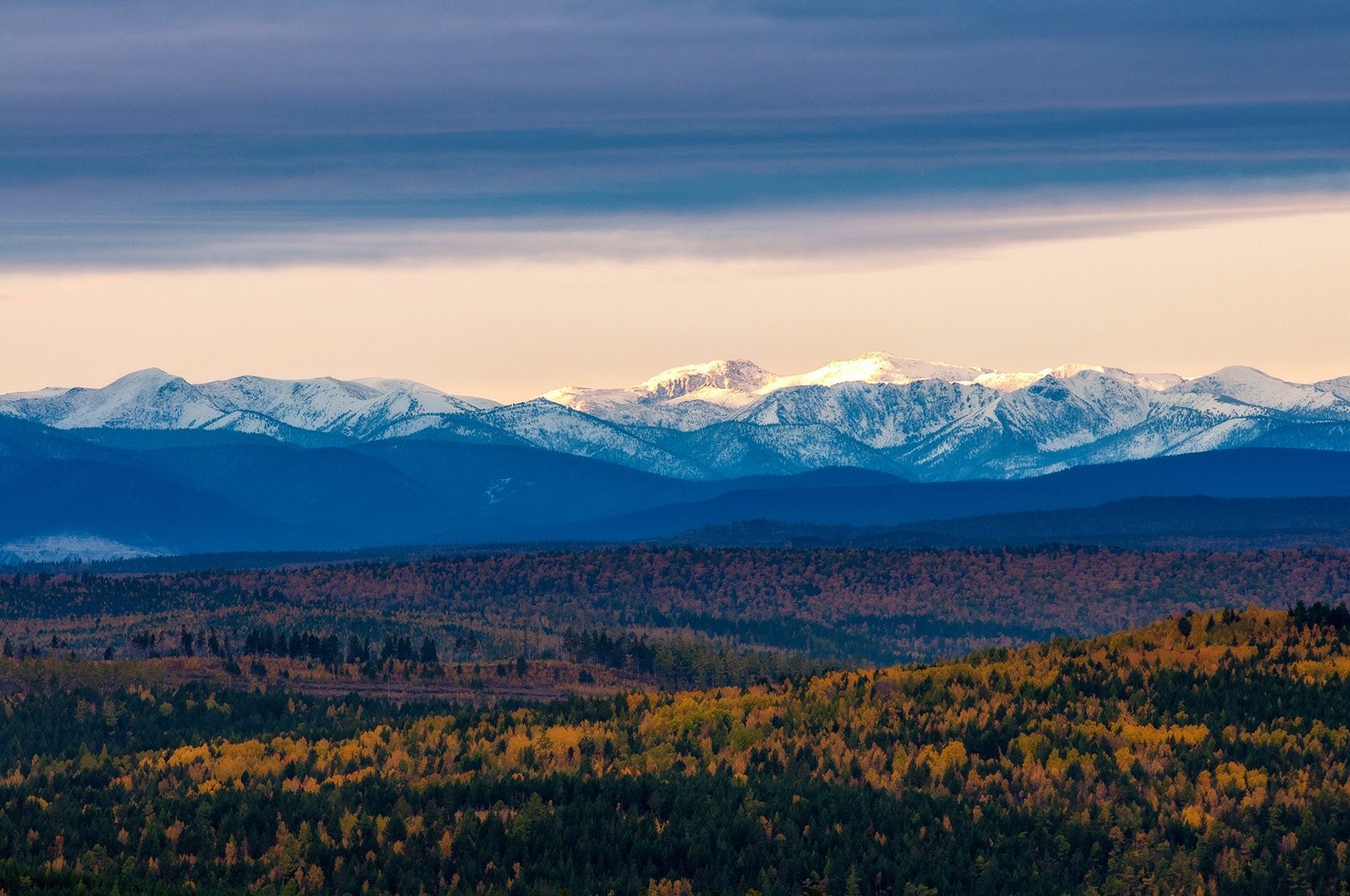 The volunteers of the Great Baikal Trail say that this place fits everyone regardless of age and interests, ranging from preschoolers to pensioners, from mushroom and berry pickers to conquerors of mountain peaks. © Photo credit: Alexey Bayfa 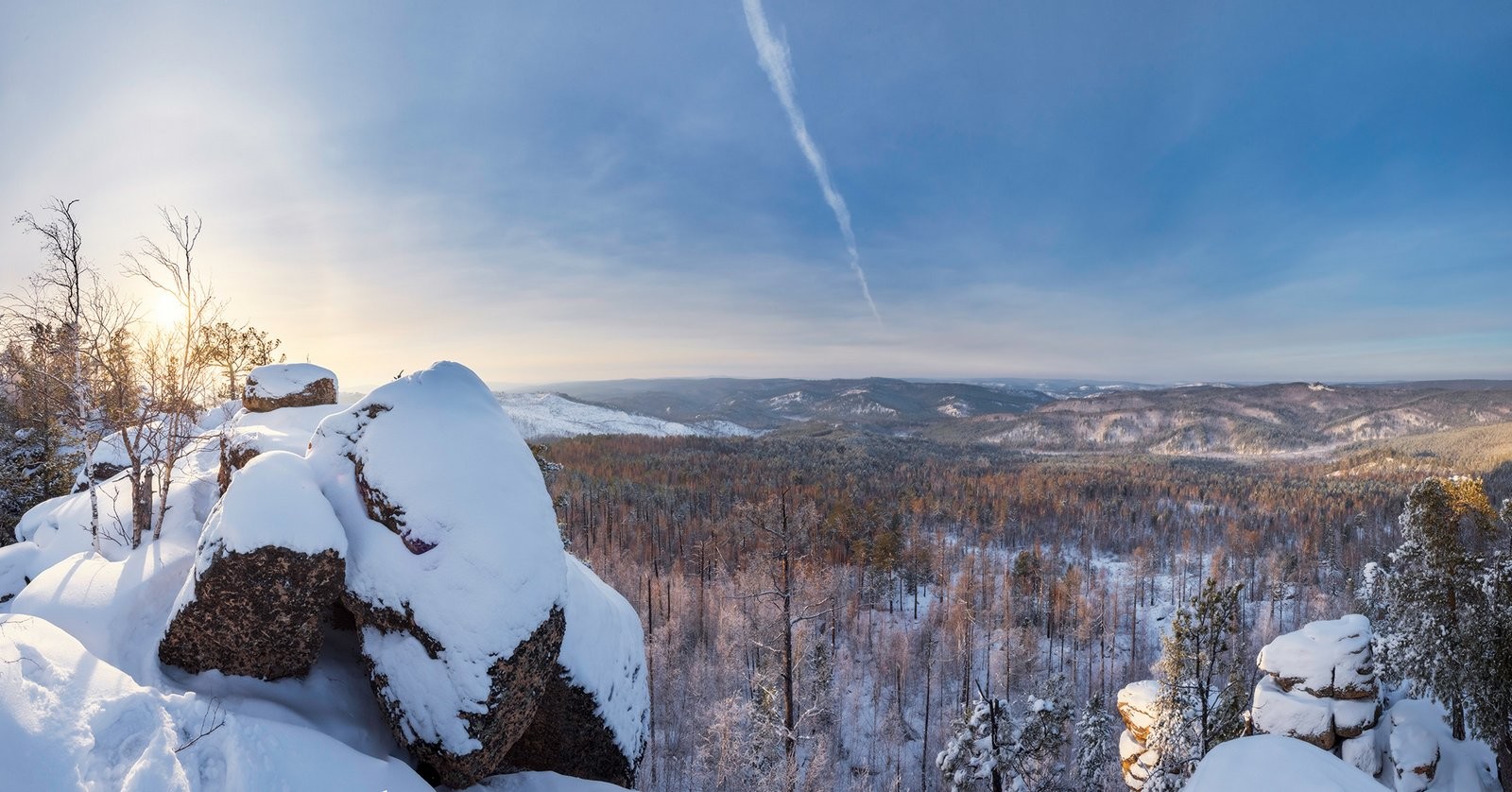 Besides, this place is beautiful and amazing at any time of the year. In winter people are pleased to go skiing among the mystical landscapes and under a bright blue sky. © Photo credit: Alexey Bayfa At nights, due to the absence of artificial lighting, the Olkhinskoe Plateau becomes an ideal place for observation of the Baikal stars. © Photo credit: Alexey Bayfa

Krasnoyarsk pillars - a complex of high fancy rocks - are well known among the fans of mountaineering not only in Russia. However, another pillars situated in Irkutsk Oblast, on the Olkhinskoye plateau are no less interesting: the road to them begins at the “Orlenok” electric train station. As a rule, people come there for one day, but you can also arrange a trip with an overnight stay.

The Olkhinskoye plateau is a flat terrain located on the territory of three districts of Irkutsk Oblast: Slyudyansky, Shelekhovsky, Irkutsky. This hill stretches for 50 km from north to south, and for 30-80 km from west to east. The southern border of the plateau adjoins Lake Baikal in the place where the tracks of the Circum-Baikal Railway are situated. From the northeast the plateau borders the Irkutsk water reservoir, and from the northwest - the Irkut River.

There is a large triangular land plot between the Tunkinskiye bald mountains and the Primorsky Range: this territory is named after the Olkha River. Many residual mountains are located here (a residual mountain is a stand-alone hill representing the remains that have been preserved after the destruction of a vast territory), many of them have unusual shape and peculiar memorable names.

This place is very popular among Irkutsk mountaineers and climbers - they are literally in love with it. And if you read their descriptions of the place on the Internet, there is nothing left to say about the beauty of these rocks: “I discover the Olkhinskoye plateau in the way I open my favorite old book, again and again, because I want to re-read once more... A piece of wild taiga land is close to Irkutsk. Endless hills seem to be similar to each other. Residual mountains with fairy-tale names crown the tops of hills. Forest roads lead to nowhere. Cranberry swamps. Raspberry thickets. Colorful blueberries. Lingonberry and blueberry plantations – bears’ grounds”. The most “hyped” residual mountains are Speleostarukha, Vityaz, Idol, Zerkala, Starukha Izergil. The highest residual mountain is Kamen’ Moigoty with a height of 1222 meters.

In this article we will introduce several residual mountains to you.

The name Speleostarukha (meaning an “an old speleological object (literally: “and old speleological woman”) in Russian) does not fully reflect the characteristics of a residual mountain. If you expect to see a large number of man holes in the caves, you are mistaken. There is only a small niche at its foot. The case is that once the residual mountain was chosen by Irkutsk speleologists for honing their skills, hence the name. This rock also has other names: Malaya Starukha (Small Old Woman), or, more rarely, Politekhnicheskaya Starukha (“Polytechnic Old Woman”), which, once again demonstrates the fact that  university students are attracted to this natural object.

Malaya Starukha is the first of the residual mountains on the way from the Orlenok station. Its low rocky ridge stretching for 1 km is visible even from the railway. This is the lowest residual rock: it starts with the accumulation of rock blocks and low rock outcrops in the shape of sheer walls on all its sides. The highest point of this residual mountain is only 20 meters, but this is also the place where the main training ground and the venue for sports events are located; these events are held on this semicircle of smooth platy vertical slopes of pink granite interspersed with rare horizontal and vertical cracks.

Additional “bonuses” include a convenient large glade for spectators, as well as the beauty of the Siberian taiga. 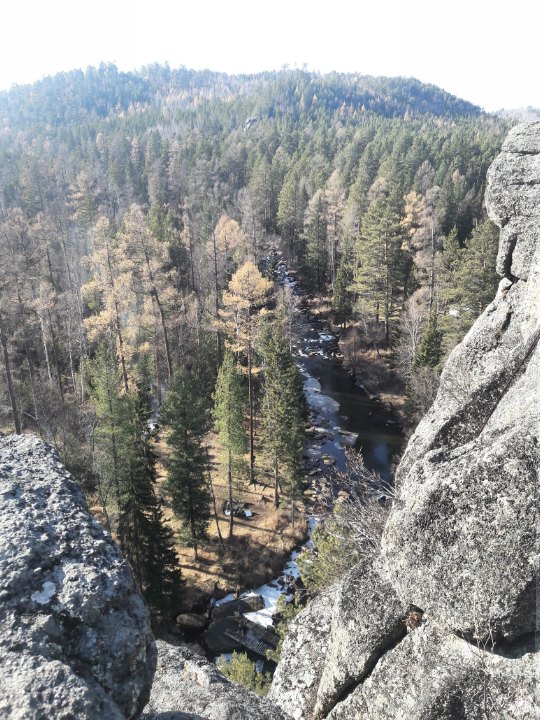 It is believed that Vityaz was discovered by a researcher assistant of the Siberian Institute of Plant Physiology and Biochemistry (Irkutsk) Svyatoslav Fedchenko. Moreover, it was discovered by accident, in the autumn of 1957, when Fedchenko was going with a group of schoolchildren from Bolshoy Lug along a forest road, thus he came across this rock.

The best way to describe Vityaz is quoting the words of one of the admirers of these places: “Vityaz is the most popular rock among the numerous rocky cities and residual mountains of the Baikal taiga near Irkutsk. Anyone who has visited the mighty rock at least once always wants to return to there: regardless of the time of year, Vityaz has a spellbinding attractive force. It is really and truly difficult to remain indifferent seeing these warm, light cliffs, plates, walls, ledges, picturesque sculpture groups consisting of pink granite”.

The history of the name of this rock has not been preserved (“Vityaz” means “warrior” in Russian). But it is undeniable that the name is pretty obvious. If you look at it from the south, standing on the bank of Olkha, you will notice a helmet pulled over the eyes with a steady gaze, a nose, a sharp chin, and the yearning for the east, as this “warrior” is turned to Lake Baikal.

The rock is also known under another name that is less popular: Gnezdo Alpinistov (translated as “Mountaineer’s Nest”). It is a real birthplace of rock climbing in Irkutsk Oblast. In this place the Angarsk mountaineering society held the first climbing competitions in the history of the region in May of 1966. Thanks to this “nest”, many climbers who are famous now “learned to fly”. A granite wall 40 meters high with a diverse relief (ledges, overhanging cliffs, perfectly smooth monolithic sections) is an excellent training ground.

Some believe that it’s worth climbing Vityaz just for the sake of enjoying an amazing view of the whole plateau seen from the rock.

A 25-meter-high stone figure is situated at a distance of about a 30-minute walk from Vityaz: it is the Idol rock. In fact, it is a symbol of the entire Olkhinskoye plateau. This name was given to the rock in 1960s, under the influence of fashionable romanticized travel stories of Thor  Heyerdahl, when the citizens of our country learned to know about the idols of Easter Island.

There are many descriptions of the Idol rock: a “column of a human roughly “hewn” from light pink granite with an unreasonably large head covered with a simple flat hat. From a distance and from the back, Idol resembles rather a squatty giraffe with a massive body”.

Idol is surrounded by numerous mountaineering stories and legends that are associated, first of all, with the incredible difficulty of climbing to its top, and even the death of those who attempted to accomplish it. The ascent surely belongs to a high complexity category; only an expert can do this. Over time, new routes emerged – eastern (“classic”) and western, with a maximum height difference of about 28 meters. A surprise is waiting for daredevils at the end of the journey. In addition to sheer walls without cracks, the ledge of the giant’s “hat” blocks the way to the top.

The pleasure of passing along the route and the opportunity to enjoy a “bird's-eye view” of the peculiar nature of Olkhinskiye rocks, unfortunately, also has a “flip side of the coin”. The ecosystem of the mountain-taiga forest massif in the Valley of the Olkha River is being actively destroyed: trees are cut down for bonfires, numerous bonfires and camps are arranged in new places. Definitely, these places should be included into the protected area of ​​the natural monument.