Baikal for Bloggers: the Most Instagramable Places of the Lake

Baikal is a real paradise for Instagrammers. We have collected the top of the most magnificent places of the lake for you: these are definitely worth a visit if you are an Instagram blogger or just fond of taking photos. We promise that these photos will break all records on the number of likes. 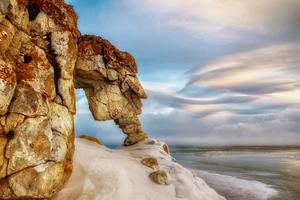 Baikal through the Photolens: How to Take Photos of the Lake in Winter

You can take high-quality and beautiful photos on Baikal at any season of the year. The winter lake is interesting for its fancy shapes of ice, frozen grottoes and snowy deserts. During the warm season, Baikal pleases you with emerald waters and steppes lit by the sun.

This is perhaps the most accessible place of Baikal. A must-see for an Instagram blogger is definitely the Chersky Stone. This mountain is the dominant peak of Listvyanka, offering a spectacular view of the source of the Angara, the port of Baikal, the Olkhinskoe Plateau and the southern part of Baikal. A special viewing platform has been installed on the Chersky Stone. There is also a ski resort at the same place; therefore, you can rise to the mountain using the cable railway (it works all year round) or on foot, although the latter option will take a little longer.

Listvyanka in winter is interesting for its ice. Baikal ice is a kind of its special brand. However, it should be noted that there are different types of ice: ice with frozen air bubbles, with beautiful cracks or just smooth clear ice allowing you to see the bottom of the lake. The best ice on Lake Baikal can be found in different places depending on the year, so you should check out the current news.

The Island of Olkhon and Its Surroundings

Cape Burkhan is a symbol of Baikal; it would seem strange to deprive your Instagram page of photos of this popular place. There is Cape Khoboy in the northernmost part of the island - the view from the cape includes the widest place of the lake.

You can see some post-apocalyptic landscapes on Olkhon: fishing vessels thrown ashore, getting rusty. Some of them have already become art objects.

The Island of Ogoy in Maloe More Strait is not only a sacred place for Buddhists, but also a very picturesque corner. It is easier to reach it in winter; besides, the Buddhist stupa standing among snow, ice and mountains remind of the legendary Shambhala.

This place is rightfully called the Baikal Riviera. Peschanaya Bay is a natural monument and one of the most picturesque places of the lake. Local taiga slopes smoothly descend to the emerald waters of Baikal. Rocks can be seen on the coast of the bay and further along the coast.

The best view can be enjoyed from the Bolshaya Kolokolnya Mountain - you can see the panorama of the bay from here. The Baikal Riviera is one of the warmest places of the lake; the water warms up well here, so there are many tourists in summer. The best time for photo shoots in this place is early autumn.

The famous stilted trees in the north of the bay are bare almost to their roots, therefore their appearance is extraordinary and beautiful. Photos taken against the background of these “attraction” is a must-have, once you come here.

Alongside with the beautiful view of Lake Baikal, the village of Buguldeika has an interesting attraction that should definitely be present on your Instagram account. Of course, we are talking about the famous marble quarry. The deposit is located near the village; and it is better to visit the quarry in summer when the marble is not covered with snow.

Ancient Tazheransky steppes can be seen the north of Buguldeika, on the way to Olkhon. We warn you that the views along the road and on the coast of Baikal will make you want to reach for a smartphone or a camera almost every other minute. The local landscape combines severity and beauty: the steppe is almost bare, covered with short grass, in some places the landscape is complemented by rocks, whereas close to Baikal the rocks turn into majestic cliffs. In some places you can see salt marshes - small lakes surrounding the twists of the road, as well as caves.

The Circum-Baikal Railway is one of the main attractions of the southern part of the lake. There you can see a unique combination of the beauty of the fabulously beautiful natural landscape and the complicated engineering and technical structures that fit into that landscape. The Circum-Baikal Railway consists of tunnels that pierce mountains, viaducts and retaining walls protecting the railway from landslides and rock falls.

The eastern coast of Baikal is not as indented as the western one. This creates an interesting combination - the taiga smoothly becoming a beach. If the weather is clear, you will be able to see the opposite coast of the lake from Enkhaluk, Svyatoy Nos Cape and some other places.

Truth be told, high places are also present in the Buryat part of the lake, for example, the Svyatoy Nos Cape. In order to climb this summit, you will have to spend some effort, but it is totally worth it: this summit offers a view of a flat strip of land separating the Chivyrkuisky Bay from the main part of Baikal.

Water is all Around. Ushkany Islands

The icing on the cake of your photo report about your trip to Baikal will be a photo taken from the ship or on the ship. In addition, if you have never seen ringed seals, we suppose that you have not seen the real Baikal either.

Of course, you can see these legendary seals in Irkutsk and Listvyanka, but only in a sealarium. Whereas on the Ushkany Islands you can take photos of the ringed seals in their natural habitat - on the so-called rookeries where animals have rest and bask in the sun.

We wish you a successful experience in wildlife photography!