Baikal Mountains: Why the Place Is Worth Visiting

Due to the extreme weather conditions and topographic features, Baikal mountains are not populated and there is no any infrastructure. The nature of the Baikal ridges has remained primeval, this is what is most valued by researchers and travelers.

The mountain range of Khamar-Daban covers the entire Southern Baikal Region, stretching from East to West - from Selenginskoye middle altitude to the mountain ridge of Munku-Sardyk to a distance of almost 500 km. The highest peaks are Subutui (2396 m), Khan-Ula (2371 m) and Sokhor (2323 m).

The climate of the northern part of the Ridge facing Lake Baikal is moderate and very wet (about 1200 mm of rain per year). This is the wettest area in the Baikal Region, so vegetation here is abundant. The forests are mostly coniferous, however, there are some relict ones with poplars and birches. The top layers are occupied by Alpine meadows, Siberian dwarf pine and dwarf birch. The forests are inhabited by elk, Siberian stag, roe deer, musk deer, wild boar, brown bear, lynx, wolverine, sable, ermine, otter, fox, squirrel, chipmunk and various birds.

One of the most accessible routes of the Southern Baikal Region is the ascent to the Chersky Peak. It is located on the territory of Slyudyansky District of Irkutsk Oblast, 17 km to the South from Slyudyanka. In the past there was a road at its foot where the merchant caravans loaded with Chinese tea went from Kyakhta. In our time the Chersky Peak is the most popular destination of the fans of mountain tourism. The route of the ascent is safe and requires no special climbing equipment. There is a natural monument attracting tourists with its beauty at the southern foot of the mountain - the high altitude lake called “Serdtse” (“Heart”). A scenic view of it can be seen from the top.

Khamar-Daban is the most convenient ridge for the majority of tourism kinds. You can travel here all year round: it is possible to make easy one-day trips, and you can also make ascents of high complexity. The ridge is rightly considered one of the most beautiful places in Siberia by tourists and local residents. The landscapes of its robust nature with its primeval looks are stunning. Ancient forests, rapid rivers, snow-capped peaks, mountain lakes – all these things inspire people to conquer the peaks of the Baikal mountain ridge again and again.

Primorsky Ridge originates at the source of the Angara River, 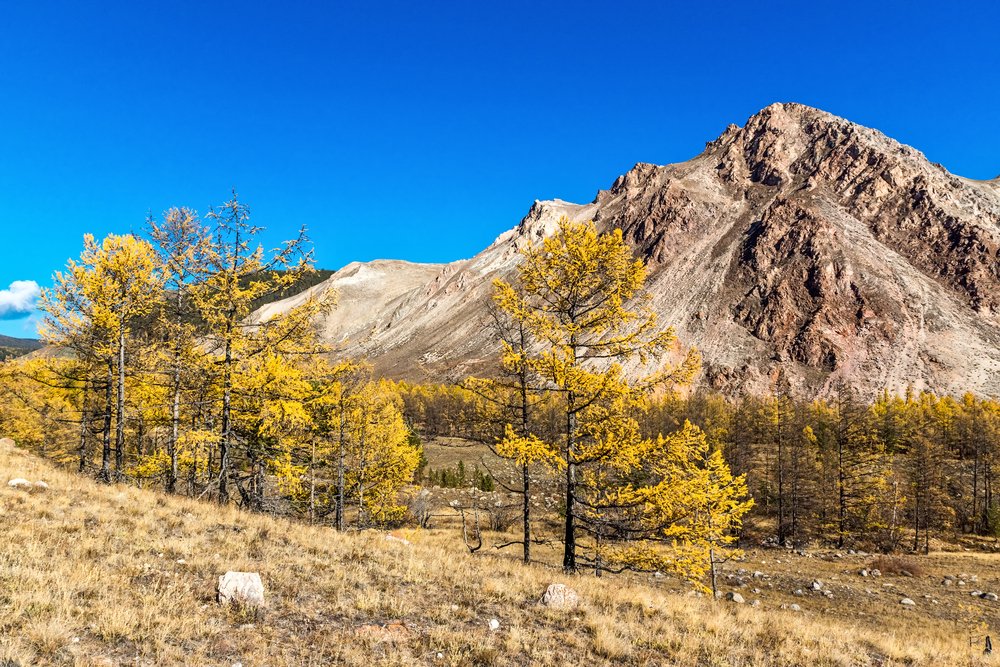 stretching to 350 km along the western coast of Lake Baikal from that point. Its highest peak is Trekhgolovy Golets (1728 m), and the most part of peaks reach 900-1000 meters. The ridge is closely adjacent to the shore of the lake, forming steep rocky cliffs and high sharply protruding capes. The picturesque bays are attractive for summer recreation.

The climate at the foot of the mountains is one of the warmest among all areas of Lake Baikal. The average July temperature is 14-16 degrees Celsius. The warmest place is considered the Peschanaya Bay: the average annual temperature here is positive (0.4° C) which cannot be found anywhere else in the Baikal Region. Sun warms up the lake well during hot summers and you can have rest here almost like at the sea.

At the same time a very small number of people live in the area. The largest inhabited locality is Listvyanka with a population of just over a thousand people, the second largest locality is the village of Maloye Goloustnoe.

The exclusively Taiga nature of the ridge does not allow you to use all of its area for hiking and skiing trips. Due to this reason, there are no mountain routes of high complexity. The most part of routes run along the coastal trail along Baikal, as well as through the valleys of the rivers Goloustnaja, Buguldeika, Anga and Sarma - in winter.

Primorsky Ridge is famous for its beautiful views of the western coast of Lake Baikal, especially the Island of Olkhon and Maloe More (“Small Sea”). Through a light haze you can see the opposite shore where the outlines of the Ulan-Burgasy Ridge and the eastern part of Khamar-Daban come out of the blue.

Barguzinsky Ridge takes more than one-third of the eastern coast of Lake Baikal: it stretches to 300 km from North to South. Barguzinsky mountains are the most powerful and highest of all those surrounding the lake. In the high-altitude zone they present long chains of speary peaks, towers, needles, pyramids, trapezoids... Their foot and slopes are full of mountain lakes, ancient glaciers and rivers with numerous rapids and waterfalls, with some of them reaching several hundred meters. Many of these natural monuments have not yet been explored.

The climate of the ridge is sharply continental (down to -40° C  in winter and up to + 35° C in summer). There are few hot cloudless days in the high-mountain region, the weather is more often cool and cloudy, drizzling rains may last for several days. Snowfall begins in September and ends in June, the thickness of snow cover in Taiga sometimes reaches 1.5 meters, in the mountains and an average of 0.7-0.9 meters at the coast. The danger of avalanches is great.

With such extreme natural conditions Barguzinsky Ridge still remains a largely unexplored area on the map of the Baikal Region. The abundance of complex and sometimes unpredictable routes does not suit each tourist. However, all trials are paid off by the magnificent mountain landscapes and the unity with the nature never touched by the man

And there will be thousands of victories,

But still you dream of

One and the same: the mountain ridge of Khamar-Daban crackles