A Trip to Bolshiye Koty or Lazy Recreation on Lake Baikal

Our reader Daria Leitman has spent the last weekend of summer in the village of Bolshiye Koty, on the coast of Lake Baikal. In her blog, Daria tells about her adventures and gives some practical advice to those who are going to travel along the popular Baikal route. 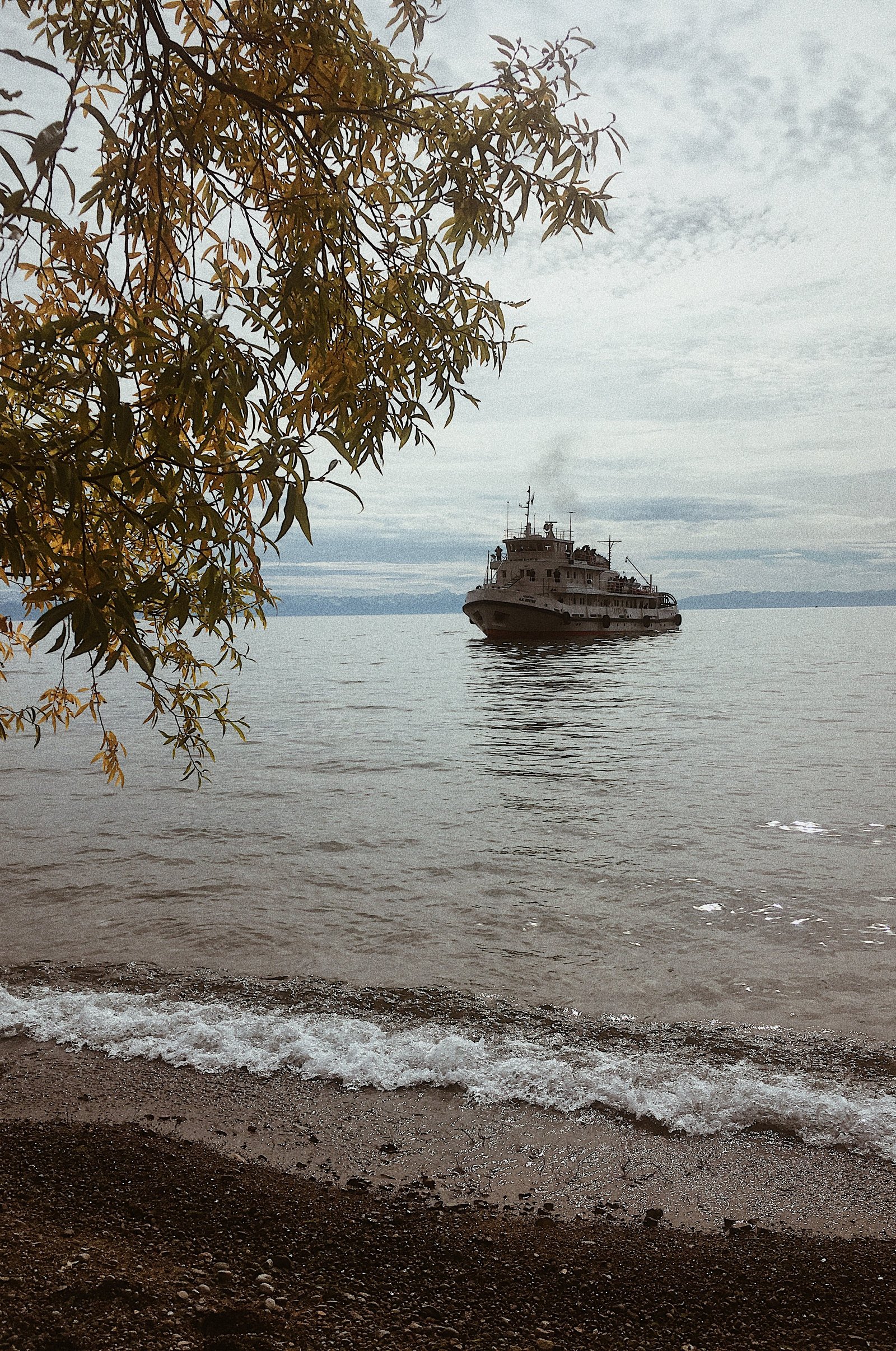 Every traveler knows that you won’t have a good weekend if you sit still, so we try to plan all the trips in advance, especially if the weather is good. Especially if this weather is the last good weather of the season. Only true Siberians can understand us, for they can wear a pair of shorts for only two months a year. So, during the last warm weekend of September everyone rushed to nature, like some cranks. We were no exception and decided to go to Bolshiye Koty. It was no surprise that buying the tickets to the “Rocket” for 4 people turned out to be difficult, even one week prior to the trip. However, I run before the hounds. First you need to learn to know about this “Rocket” and the ways of getting to Bolshiye Koty.

The village of Bolshiye Koty can be accessed in two ways:

- By high-speed motor ships titled “Voskhod” (“Sunrise”) and “Raketa” (“Rocket”) in summer. The trip takes 1.5 hours. The benefits of this kind of transportation are undeniable: it is warm, comfortable, fast. And you can also see the coast of the Angara and Lake Baikal from an unusual point of view. Ticket price from Irkutsk makes up 900 roubles one way. A ticket from Listvyanka costs 450 roubles.

- You can also go on foot. “The Great Baikal Trail” along the route Listvyanka-Bolshiye Koty-Bolshoye Goloustnoe is one of the most popular destinations for beginners and experienced tourists, hikers and stalkers of beautiful shots. The trail has been built by a group of volunteers, in order to promote ecotourism and careful attitude to nature. The trail going along the picturesque coast of the lake is most often wide and convenient, but there are also dangerous sections where one has to walk along the edge of a cliff. Therefore, its level of complexity is medium, not simple. In order to get from Listvyanka to Bolshiye Koty, you will have to walk almost 25 km on foot. The secret of success is comfortable shoes. Trekking poles will also come in handy. Then, of course, you should take a snack, so that to have an excuse to halt for a while.

When we arrived in Bolshiye Koty, I went ashore. I do not see a single cat (“Koty” may be translated as “cats” from Russian). Alright. This is the most common joke about the name of the village :). In fact, Bolshiye Koty should be pronounced with an accent on the letter “o” (unlike the word meaning “cats”). Because it is derived from the word “KOty” or “KOtki” - the name of wooden shoes for convicts that were once made here. However, 90% of people, even locals, still call the village Bolshiye KotY (“Y” is stressed and makes the village’s name sound like “Big Cats” in Russian). And I am very happy to hear this, being a great cat lover. After all, cats are much nicer than some kind of wooden shoes. Apparently, the owners of tourist centers are also of the same opinion. Therefore, advertisements of hostels often announce such names as “Black Cat”, “Cozy Cheshire” (i.e. associated with cats), etc.

The village itself is small. You can go around it in a couple of hours. By the means of voting it was decided that we would walk around the village on the following day. And that day we settled in a hotel, took only the necessary belongings and went along the trail towards Goloustnoye, in order to find a beautiful place and have a picnic.

You should not expect much comfort: local hostels and hotels are very simple, but at the same time almost all the rooms are always occupied, so you should take care of accommodation in advance. As a rule, there are several simple wooden houses on a large land plot, the houses contain rooms and household buildings - kitchens with open sheds, toilets, greenhouses, fireplaces, and, of course, Russian baths. Everything is very simple, it is not some Courchevel. The village of Bolshiye Koty is popular among tourists from other regions and countries: you can hear foreign speech almost everywhere.

We left unnecessary things in the rooms, going to have dinner and enjoy Baikal on the coast. We walked along the coast. Soon the civilization (truth be told, a very conditional one) was behind us, then at the end of the street we saw a clearly visible sign saying “The Great Baikal Trail”. Beauty began right away. Baikal sparkled in the last rays of autumn sun on the right. On the left we could see the branches of wild sea buckthorn hanging above the trail; the berries were as sour as lemons, but the tree looked great on photos. After we walked about 3 km, we descended to the coast, where we saw a fireplace left by someone, so we started to cook dinner. We ate soup from a pot, sandwiches, fried marshmallows and drank wine. The trail passed right by our side, and I thought that the tourists passing by were very jealous of us. We lazily lounged on mats (we were wise enough to take those with us), like some kind of seals, thus we spent the time by the fire until darkness came. We had to return in the light of the headlamps.

As soon as the sun sets on Lake Baikal, you suddenly realize that it is not summer anymore. As ill luck would have it, the electricity was turned off in the tourist center that evening, which meant that electric heaters that barely warmed up the rooms stopped working at all. The temperature in the room was the same as outside. We covered ourselves with all possible blankets, and, of course, slept in warm clothes. A piece of advice: better do all the important things before you go to bed, because it is a real torture to force yourself to go out at night. 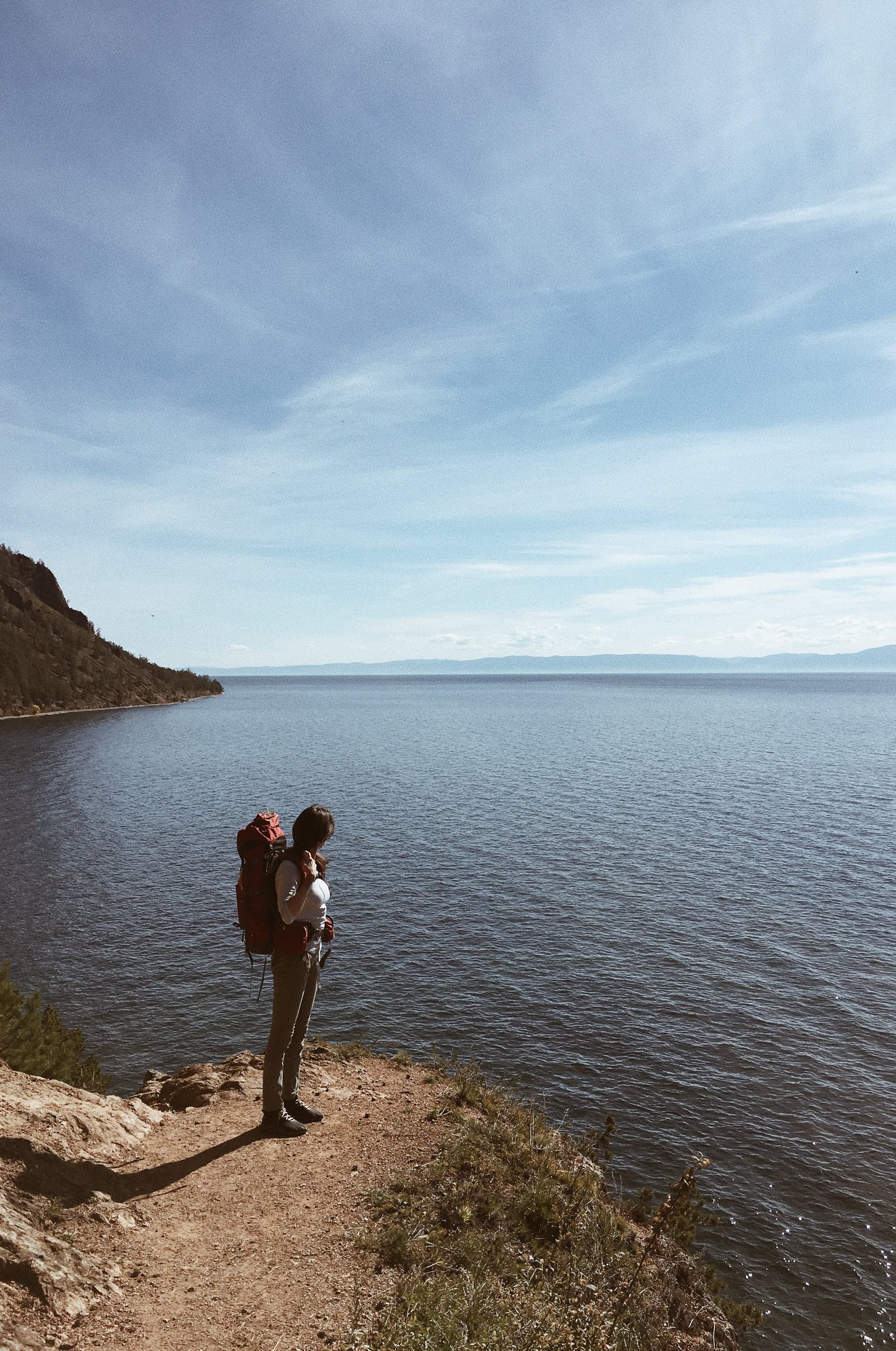 In the morning the sun was shining again, as if nothing had happened, the temperature outside was +20 degrees Celsius. All at once, life was so good again!

On the next day we climbed to the local observation platform. 20 minutes of climbing the hill, 5 minutes of dyspnea, then we stood at the very top. There is even a gazebo on the platform, but we preferred to sit high up on the rocks, look at the village that spread out below and play the following game: “which land plot we would buy and which house we would build there”. There is also a museum of Baikal Studies (check the opening hours in advance) and a wooden chapel in the village. There is such place as Skriper Rocklocated 9 km away from Bolshiye Koty, in the direction of the village of Goloustnoye, you should definitely go there, unless you are lazy. We originally planned a relaxed recreation, so we did not go this far.

Here is my main recommendation to those who are going to visit Bolshiye Koty: purchase food in advance. The only store in the village will surprise you with prices: all products are two or even three times more expensive than in the nearest Listvyanka or Irkutsk. It is understandable, because getting еhere is not so easy. Rumors say that the local saleswoman bakes fresh delicious pastries, but we were not lucky to taste them. Take only cash with you. The store doesn’t have any kind of payment terminal. There is a mobile bank service, but do not hope for a good mobile network. Subscribers of Beeline, Yota and Megaphone should forget about their phones. Those who use MTS can hope for periodic outbreaks of communications. Tele2 network works the best there.

We spent the rest of the day on a forest glade overlooking Baikal, drinking tea and reading books. Some of us even managed to fall asleep and get the last sunburn this year.

Afterwards, we safely returned to the pier, boarded the motor ship and returned home.