The Vernissage of Ancient Paintings: What Anga River is Famous for

A lake with a golden crimson coast, rock paintings of the ancient people and an ancient defensive fortress in the rock. All this can be seen on the banks of the mysterious and ancient Anga River filling Lake Baikal...

Such an unusual name - Anga, odd as it may seem, also belongs to other rivers in Russia, besides, its namesake flows even in Irkutsk Oblast.

Many geographical names connected with the vocabulary of various indigenous peoples have accumulated in Baikal region. These names accurately and vividly reflect the peculiar character of local conditions, indicate the remarkable features of nature or the specifics of the economic structure.

Both Buryats and Evenks (Tunguses) use the word “anga”, which is translated as “muzzle”, “mouth”. However, the word can also have an indirect meaning. In this case, “anga” is interpreted as “gaping”, “open”, “disclosed”, “wide open”. The figurative meanings of the word are as follows: “cleft”, “ravine”, “rain channel”.

Indeed, both Baikal Anga and Lena Anga really pass through crevices and hollows, replenishing with their waters both the Great Lake and the majestic Siberian river.

But there is another version where “anga” is a beast whose meat was procured for human nutrition. And for this purpose the Evenki used to hunt the animal in the valley of this river.

In general, fame came to the Anga River thanks to the activities of the recognized researcher of the Baikal Region, Alexander Lavrentyevich Chekanovsky who compiled a unique geognostic map of Irkutsky, Verkhorensky and Balagansky districts that was published in Irkutsk in 1873. By the way, he noted that Buryats often called Anga by the name “Akhta”.

The upper reaches of the river are located on one of the highest, northwestern points of the Primorsky Range designated by A.L. Chekanovsky as “Khargoysky Bald Mountains”. The most popular Encyclopedia of Brockhaus and Efron wrote that if you look at the bald mountains from Baikal, they seem to be white, but not due to the snow, as it was suggested earlier, but due tp white quartzite and its decomposition product - white sand covering the mountain tops with heaps of huge quartzite blocks on them.

According to the formal characteristics, the river is over 90 km long (the majority of sources indicate the figure of 99 km), 27 meters wide at its mouth, 1.4 meters deep, and the velocity of current makes up 1 m/s. This is one of the largest rivers in the Olkhon region (taking the second line after the Goloustnaya River). Its tributaries include Srednyaya Anga (Middle Anga), Malaya Anga (Small Anga), and Kuretka.

Chekanovsky divided Anga into three parts: upper, middle and lower. Interestingly, whereas Anga originates on the slopes of the Primorsky Range, the lower part of the current of Anga crosses the ridge in the transverse direction once again.

It is quite natural that the place of the river source itself predetermines the mountain character of the river on this section. However, beginning from the village of Elantsy, the current is already calm, plain; the river has quite a “gentle character”. The left bank in the lower reaches of the river has rocks consisting of marble-like limestone.

The river flows into Baikal, into Ust-Anga Bay. But the mouth that we see today is different from the landscape that could be seen, for example, at the time of Chekanovsky. As a result of growing level of the lake, due to human-induced reasons, the area of the river mouth was flooded. And if you look at a photograph of this zone made from space, then you will be able to clearly see the outlines of the former beach.

The river has many curves and is extremely beautiful. Downstream small pits (up to one and a half meters) are replaced with channel bars; and sometimes bushes form a shady tunnel with their branches.

A small mountainous section in the mouth area makes it possible for you to admire the beautiful landscapes of Lake Baikal and the river valley itself. The blue ribbon of the river is winding through emerald fields and disappears beyond the edge of the sandy beach, then we can see the expanses of Baikal. The fantastic sacred mountain Yord can also be seen in the middle of the river valley.

The mouth of the river itself is located in a wide marshy valley. However, here, in the middle of the steppe, this amount of water is a real oasis, real wealth which is used by all plants of the valley.

There is a unique natural complex - the Tazheran steppe – located on the section from the mouth of the Anga River in the south to the of Olkhon Gate Strait in the north. It is represented by unique specimens of plants and animals.

The Ust-Anga Bay is amazingly comfortable; it protrudes very far into the strip of the coast. Before entering the bay, you can often encounter with the severe Baikal wind, but when you get into the bay itself, it surprises you with the tranquility of its nature.

What to See on the Banks of Anga

This land has been surrounded by mysteries, legends, and tales since ancient times... Many places are considered sacred; some of them are unique natural, historical, cultural monuments.

The most part of the Baikal cave paintings are located in the valley of the Anga River. Its left bank in the lower reaches is framed by marble-like limestone cliffs demonstrates paintings dated from the Neolithic epoch to the late Middle Ages. A total of about 10 objects with rock paintings have been preserved until today; besides, as a rule, these are not separate pictures, but whole complexes. They represent the perception of the surrounding world by ancient taiga hunters and steppe nomads.

The main “hero” of almost all left-bank paintings is the European red deer. Interestingly, the ancient artists tried to thoroughly depict the branched horns and cloven hooves.

If you go on bridge across the river, upstream, there you will see the Sakhyurte Mountain (Silicon Mountain”): the most ancient group of rock paintings of the Baikal coast can be found on this mountain. The pictures of Sakhyurte stand out in the diversity of the animal world: elk, roe deer, wild boar, horse, goat.

There is a legend that a married couple Sarma of Sagan Noyon found Sakhyurte a convenient place for themselves to live. So, they painted the images of themselves on the mountain. Six human figures are present here, among them there is a figure with a big belly – the Siliceous White Mistress. 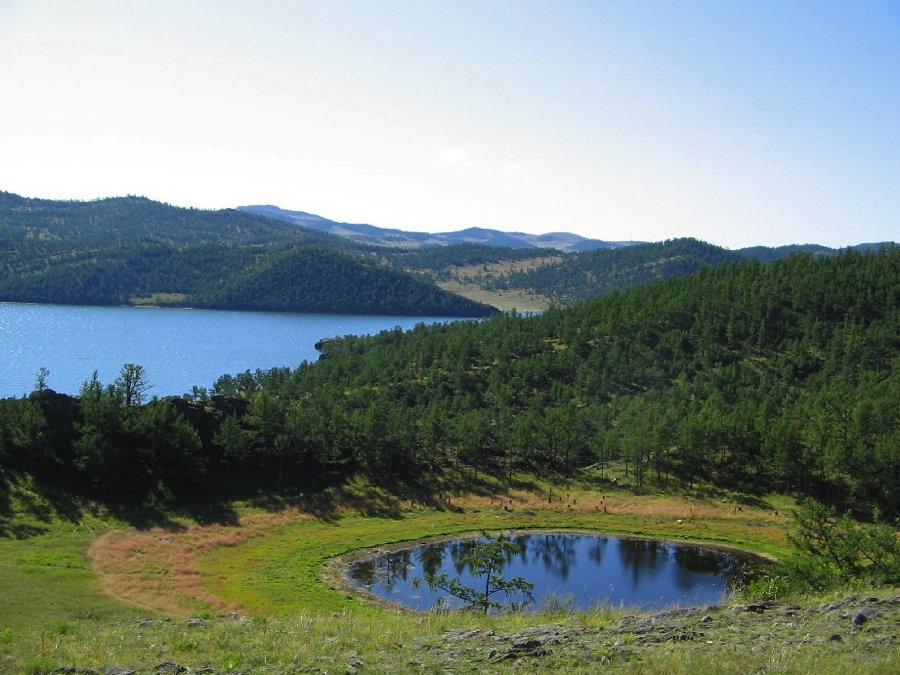 There is a magnetic lake of perfect rounded shape in the area of the mouth of the Anga River: the nature of emergence of this lake is still difficult to explain. The most common the version suggests that a meteorite fell here. The most part of the time the water reservoir is covered with grass of weird golden-crimson color, however, depending on the weather, the lake is filled with water. Only insects live in the lake, there are simply no other living creatures in it.

Naturally, the lake has a belief connected with it. Due to the lake’s small size, it is quite easy to go around it. So, if you make a wish and go around it, your wish will come true.

The Guardian of the Anga River - Shebeta Mountain

Shebute Mountain (Shebeta, Shebetui) is located on the right bank of the river (near the village of Elantsy). The origin of the name is associated with the Buryat “shebee” – “hedge, fence, stone wall”. It is logical to assume that this is a guarding cape with walls, which, by the way, are made of stones without the use of any cementing substances. It is believed that this defensive structure was created by the Kurykans (an ancient tribe that lived in this region even before the Buryats). Of course, today we can find only remnants of old buildings. But the ascent to the mountain will offer the travelers a stunning panorama of the lake.