Utulik: the Sportiest River of Baikal

We continue to introduce the rivers flowing into Baikal to you. Now it is the turn of Utulik - the river being a dream of professional rafters and tourists coming here for the special Baikal microclimate.

Utulik is a fantastic place that was virtually not influenced by human presence. A tributary of Lake Baikal on Khamar-Daban, the river received its name from the Buryat word “Khutuleg” (or “Khutel”), translated as “a low pass”. But there is also a problem. It is absolutely not clear which geographical object was originally meant by that word. The case is that along its whole length Utulik is surrounded by a large number of stone spurs.

Slipping Away from the Embrace of the Baikal Mountains … 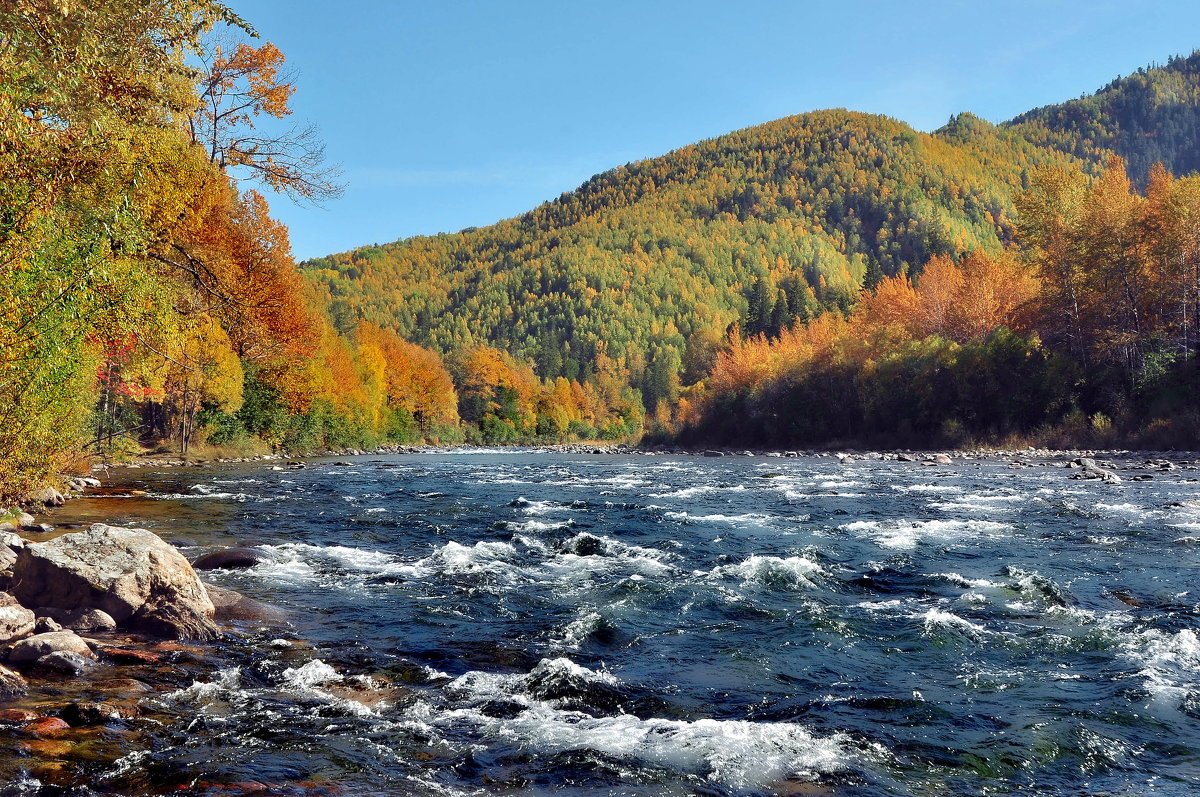 It can clearly be seen on the map that Utulik is a river stretching for 86 km across the territory of Buryatia and Irkutsk Oblast. To be more specific, the source of the river is situated in the watershed of Khamar-Daban on the Patovoye Plateau, then it flows further to the northeast, through Tunkinsky and Slyudyansky districts.

If you go on a trip along Utulik, then you will see that its banks are colorful, bright, and attractive, and that they follow the water flow along a narrow canyon-like valley. In its middle part the river descends into the gorge, collecting numerous small streams and waterfalls. However, the main sources of water replenishment can be different: rain and melting snow, as well as groundwater. There are many tributaries with interesting names (Bystry Klyuch, Bolshoi Solbakh, Pryamoy, Rassoha), but the main tributary is considered Shubutui (Shibutui, Subutui). It can be called a “twin” of Utulik - Shubutui flows into the river at a distance of 41 km from its mouth, bringing half of its waters to the “brother”.

Rapids, rapids
Abrupt rapids
Turbulent rivers are not so calm...

To make you understand the things we are going to talk about, we offer you a small glossary. Otherwise, it will be difficult to grasp the incredible attractiveness of Utulik for tourists in general and water tourists in particular

Overflow (spillway, rapid, waterfall) is formed by the flow of water rushing from a single overflow stone, a ridge of stones or steps in the river bed.

An overflow stone is a stone located close to the water surface or slightly protruding from the water. Due to the fact that the water jet hits a stone with a certain charge of kinetic energy, the water can flow over the stone, but then it decelerates and the water level above the stone rises. The water below the stone, depending on its size and flow rate, can either break off from the surface in a thin film with a large air cavity formed under it, or fall vertically downwards, forming a deep and firm “barrel”.

A barrel is foam pit, cauldron. It is formed in the place where water falls from steep rapids. The danger lies in strong vertical circulation creating a counter-current of water on the surface of the barrel, where the movement of the boat (catamaran, raft) is decelerated by the counter-current, and the flow of water falling down from the rapids can turn the vessel over.

“Shivera” is a fairly shallow (up to 2 meters deep) section of the river with protruding stones and fast currents chaotically located underwater.

Breakers are stationary waves that are motionless in relation to the riverbanks.

Rapid is a stony or rocky section of the river with a rapid current and a steep riverbed (inclined at an angle from 15 to 45 degrees). It is a combination of various obstacles (breakers, barrels, surface and underwater stones). Sometimes rapids turn into cascades: a sequential combination of several rapids. 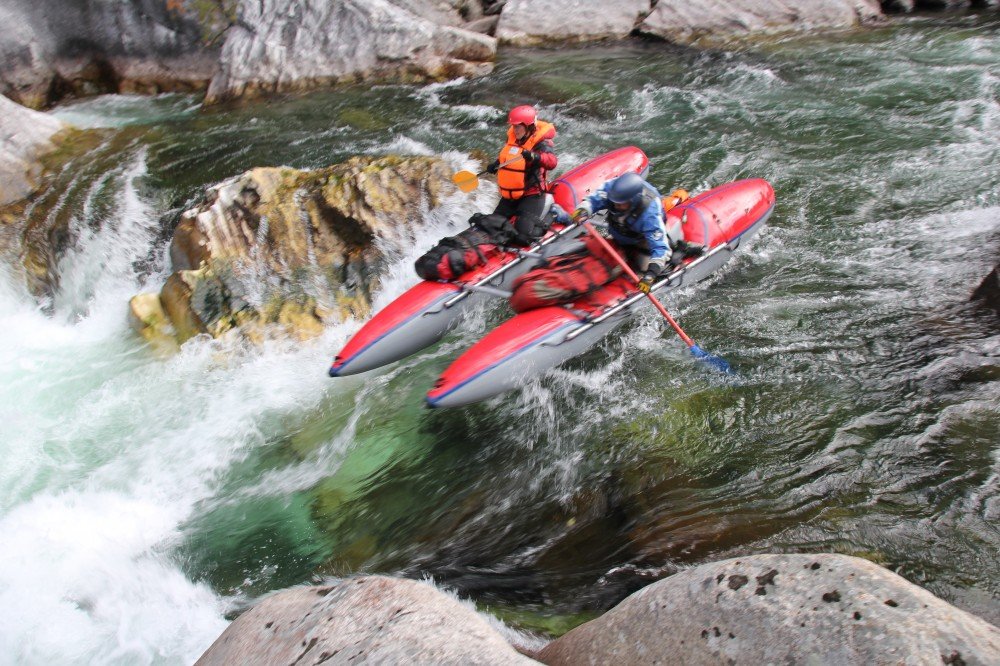 Utulik is a dream of a water tourist. Approximately 90 km of its current contain 100 obstacles of the most diverse complexity! And 13 of them are rapids with their own names: Razdelny, Chizhik, Tryokhkaskadny, Traves... There is one obstacle per kilometer for an adventurous traveler. Besides, the average slope of the river is 7.7 m/km! Above all, you will not encounter any settlements during your rafting, and experienced tourists jokingly call this an additional obstacle, the obstacle number one hundred and one.

Rapids are literally going one after another. The most interesting and difficult of them are the following:

- Chizhik. The length of this two-step rapid is 200 meters, it consists of chaotically located overflows up to 1 meter high, and the main difficulty is due to the approximately three-meter output overflow. According to the descriptions of those who passed the rapid, at first, there are only ordinary breakers, the current presses you to the left bank, and at the end ... there are water mountains! An incredible mixture of water and air!

- Mangutaisky. It is considered a unique exotic attraction of Utulik, its most difficult obstacle. The landmark for those approaching the rapid is a 100-meter stretch ending in huge boulders that cover the river. The entire 150-meter-high rapid is an uneven combination of barrels and overflows, accompanied by a large height difference over a rather short distance, which leads to incredibly strong water flow. Overflows have a series of steps up to 2 meters. The rapid is crowned by complicated gates made of white large stones. Experts warn you that the Mangutaisky rapid is only passable at a certain water level. When the water is low, it is impossible to pass it, due to the fact that the channel is blocked by boulders;

- Bolshoy Mordovorot. This 100-meter rapid is located on the left turn of the river consisting of two cascades. The steps are separated by a section of rapid, but fairly calm water, where a rock “resembling a serpent’s head” is reflected in the river’s water. The rapid itself is characterized by the presence of waterfall-type overflows, barrels; and as you pass the first cascade, you should keep it in mind that the last barrel is the most powerful. The second cascade is a heap of overflow stones on the right, a 4-meter drop, and getting out of the rapid requires to be extremely cautious, because of the strong jet hitting the rock;

- Maly Mordovorot. This is actually the last rapid of Utulik. Its 150-meter distance includes gates with overflows at the entrance and an overflow with a barrel and a series of breakers with a reverse ridge up to 1.5 m at the exit. The rapid is very impressive, but after it, you feel that Baikal is close: the height of the banks decreases, and you only meet such obstacles as simple “shiveras” and “shiveras-rapids”.

What a pure air; and everything is quiet,
You see small fish at the very bottom!
You can breathe freely and easily...

An eponymous village is located at the mouth of the river. Both the river and the village enjoy deserved popularity among tourists. The climate is very comfortable: no exhausting heat in summer (average temperature is 23 degrees Celsius), virtually no midges, mosquitoes, ticks, and the autumn pleases you with environmentally friendly gifts –berries, mushrooms, and pine nuts. But the main highlight of these places is winter. The temperature rarely drops below 10 degrees Celsius in the daytime; the snow on the mountain tops lies from November to April, which prolongs the ski season. Moreover, numerous waterfalls are the most beautiful precisely in winter, because they turn into crystal clear icefalls.

The presence of amazing fishing spots on Utulik increases the river’s popularity even more. The main trophy is mostly grayling, but fishermen also catch taimen and lenok.