Transport Off-season Period: Baikal is Waiting for the Permission to “Hit the Ice”

The ice has already frozen, but there is still an entire week until the opening of the official ice road to Olkhon.

It is an off-season period: the navigation ferries is long over, winter boats which sailed up to Olkhon Gate also stopped navigation, being unable to pass through the slush ice, and the communication with the “mainland” is carried out only with the use of amphibious boats condescendingly called “pillows” by locals. Everyone is waiting for the opening of the official ice crossing, but the road service gives no permission. We talked with road workers and local residents about the way they are preparing to launch the road to civilization and how they deal with waiting during this period.

Key to Baikal: The main question is: has the ice already frozen?

Anatolii Votinov, the Head of the Department of Engineering Structures and Ferry Lines of the Directorate of Car Roads of Irkutsk Oblast, explains

Anatolii Votinov: Yes, as of today, the ice has frozen. Now the organization of the only official ferry line to Olkhon is being continued: the route goes from Kurkutsky Bay to the Kurkutskaya Gulf on the island. The road length is 12 kilometers. The road is located in the same place every year. This year it has not yet been commissioned. The thickness of the ice, as of today, amounts to 53-55 cm; it is not enough for heavy vehicles. In principle, it could be possible to open the road, but if it is open for passenger cars, then heavy timber trucks will ride through it, too. The ice will break, people will drown. We prefer to be on the safe side, and such accidents never happened on our ice road.

Key to Baikal: When will the crossing be opened?

Anatolii Votinov: The scheduled date is around February 9-12. By this time the road must be fully equipped. It is necessary to put all the ranging poles: the blocks should be cut deep into drilled holes, poured with water to make them freeze into the ice. Now try to calculate it: one pole every 50 meters, in four rows: the total amount makes up about a thousand pieces that need to be put. The poles should have red and light-reflecting marks on them, so that they are visible during the daytime and in the dark. Each shore should have barriers before exit to the ice and check points that monitor the safety of road traffic.

Key to Baikal: Do people already ride on ice? Not on the road, but on ice in general, without waiting for the opening of the crossing?

Anatolii Votinov: People ride all the time! Once the ice is frozen, even slightly, locals, especially brave ones, think that they are fully entitled to cross the lake. Building a road is a big job. We clean the snow, knock off the hummocks, sign the way up by ranging poles, put the signs of maximum carrying capacity, depending on the thickness of the ice. And those people go “in a wild way”, without guidance, they see their destination point on the opposite shore and ride directly there. That’s why people are drowning. They go in the traces of other cars: if someone passed there, they think they also should; thus spontaneous roads are organized.

The resident of the island Igor Shramko told us about the reasons that make the residents of Olkhon take risks.

Igor Shramko: The ferry stops the navigation on the last days of December; then they launch a motor boat. The boat runs until its power is enough to break the ice crust: this year it stopped sailing on January 14. Then they launch an amphibious boat on the first ice: this boat cannot sail on the water, because its screw freezes. The amphibious boat usually runs until the middle of February, until they launch an official ice crossing. The road operates at the discretion of the road service which prefers to be on the safe side; and this crossing is open until early April: in warm years they can close it right on April 1, in cold years they wait until April 10-15.

Key to Baikal: However, local residents prefer not to depend on the official crossing and hit the ice before its opening and after its closure?

Igor Shramko: Yes. For example, during the freeze-up, like during these days, it is already safe. But the road builders have their own standards for arranging ice crossings. When the thickness of the ice reaches 30 cm, they could open the road to passenger cars, but they are waiting when the ice gets thicker, which is very inconvenient for us locals. 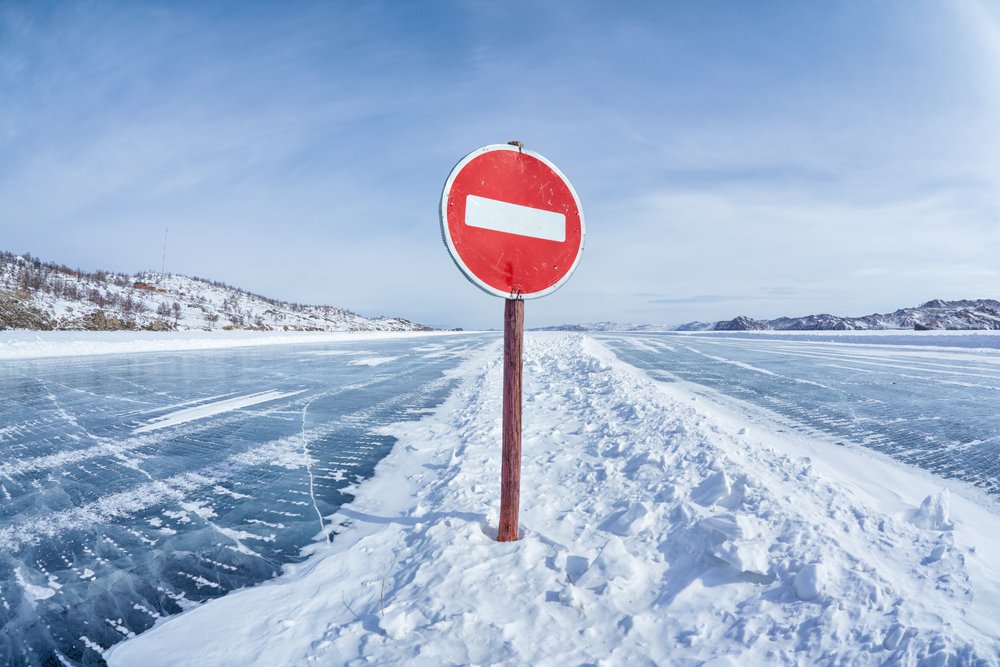 Key to Baikal: Do you have your own tried and tested routes?

Igor Shramko:  Not that they are tried and tested, but everyone knows dangerous spots and rides around them: these spots are Olkhon Gate, Kobylya Golova, bays with warm springs on their bottom. People usually go directly to the bays of Okhoy and Kurkut. This route is not parallel to the official road - it goes towards Sarma, then to Maloe More and to the Kurkutskaya Gulf. Our road goes in a straight line.

Key to Baikal: Do experienced drivers from Olkhon have their secrets how to identify dangerous spots?

Igor Shramko: Of course, but it is difficult to explain. The main thing is to determine the ice thickness. An experienced driver can estimate this by sight if the ice is transparent; it can also be determined by cracks in the ice. Those who ride on the ice for the first time in the year, measure ice thickness, take into account the weather on the eve of their trip, know the exact thickness of ice freezing per day and drive carefully. The ice that is 25-centimeter-thick is already safe for passenger cars.

The famous ice captain Aleksandr Burmeister told about the most dangerous parts of the Baikal ice.

Aleksandr Burmeister: We must remember that the waters in front of all the capes of Maloe More and the Mukhor Bay are shallow, there are strong currents under the ice and warm springs on the bottom. These are the reasons why people die each year, and most often these are visitors. People come across a compacted road on the ice and think that the road safe, because the locals should know where to ride.

Locals also know that you can ride on that ice on a motorcycle in February, but from the beginning of March the road would lead into the open water, however, the track of the wheels will remain until April and be clearly visible. From the first sight it looks like a pretty good road. There are problematic spots with weak ice, such as Shida, Ulyurba, Toynaki, Khunyk, Ulan-Khan, Kobylya Golova: there is open water in these places every year beginning from March, so riding there is strictly forbidden.