The “Devil’s Funnel”: a Hole Leading to the Abyss of the Waters of Lake Baikal

Many people living on the coast of Lake Baikal believe in its supernatural power. Sometimes the Holy Sea is considered almost a living being or a conductor between the worlds of the living and the dead. And some believe that Baikal can take bloody victims when it wants. “Key to Baikal" will tell about one of these beliefs.

There is a place called “Devil’s Funnel” in the deepest part of the lake, thirty kilometers to the north-east from the island of Olkhon. Most often this stretch of water pleases the eye with its smooth surface and is not any different from the rest of the lake. Its area is about two square kilometers. But this site is famous for the fact that the water here begins to behave in a very weird way once or twice a year. The water in this place starts to rotate at a cosmic speed at complete calm and the loveliest weather. After some time a huge whirlpool is formed in the epicentre: it sucks in itself everything around.

Local residents believe that this is the way the abyss opens: thus the souls of sinners go to the underworld, taking away those who did not manage to move their ship away from the cursed site.

Those who looked at the “Devil’s Funnel” at a close distance say that they could hear screams and painful groans coming from there. Besides, the funnel appearing out of the blue is extremely dangerous: it sucks in everything next to it. In addition, after that its edges gain on lilac-bloody colors. It seems that the funnel is a monster that has swallowed its victim and is satisfied with its blood.

Experienced people say that it is best to watch the funnel, having climbed to the legendary Shamanka rock. However, there are still few reliable photo and video evidence to this phenomenon, despite the large number of eyewitnesses.

The most famous description of the “Devil’s Funnel” refers to 2003. That summer the resident of Irkutsk Igor Evlampiev was sailing on a boat on Lake Baikal and became a witness of the appearance of a funnel. It happened in the same place, to the north-east from Olkhon. At that time the sun was already setting, then he saw a dark spot in front of him suddenly appearing on the water surface and beginning to grow rapidly. According to Igor, soon a hole was formed in that spot, the air above it suddenly gained on a menacing dark purple color. Then he heard a muffled sound of a multitude of ... human voices that sobbed, wept and called for help. Realizing the danger that was threatening him, Evlampiev hastily turned the boat in the opposite direction, sailing away from the terrible funnel and creepy voices at full speed.

Despite such a vivid story, Igor did not present any documentary evidence. On the other hand, it is unclear why he would want to invent a story about the menacing funnel. 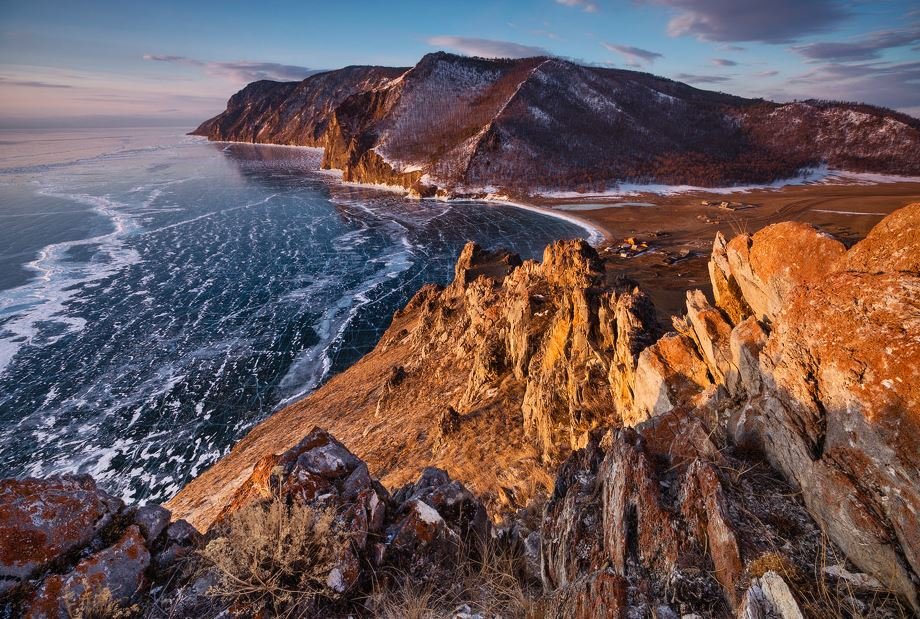 Many people doubt the existence of this amazing Baikal phenomenon, moreover, there still have been no unequivocal scientific explanation for it. Local residents have long believed that the funnel opens the passage to the afterlife for the souls of the dead, more so since the  eyewitnesses of the phenomenon claim that they could clearly heard numerous voices and observed a mysterious glow directly above the funnel. Scientific explanations suggest several versions of the causes of this phenomenon. One of them reviews the version about local pits on the bottom of Lake Baikal that lead to the formation of cavities rapidly filled with water, which causes the formation of whirlpools on the water surface. This theory is supported by the fact of high tectonic activity in the region: in January 1862 a new bay was formed there as a result of a huge collapse of the coastline: the bay was named correspondingly – “Proval” (“Collapse” in Russian).

Another theory assumes that two opposing local currents collide at site of formation of a funnel. The direction and strength of these currents depends on the time of year and weather, so under certain conditions the streams of water move strictly one towards the other. This kind of interaction of reverse currents can indeed lead to very powerful whirlpools. Similar phenomena can be observed near hydraulic engineering structures and upon collision of reverse tidal waves. No detailed study of this theory have been conducted until now, therefore it is rather one of several assumptions.

The “Devil’s Funnel” is one of incomprehensible wonders of the Great Lake Baikal. The phenomenon is fearsome and attractive due to its mystery. Perhaps, soon it will be explained and supported by documentary evidence. Meanwhile, the mystery is waiting for its explorer and pioneer.