Shirildy: the “Sable River” of Baikal

Here is a new story about the river flowing into Baikal. This time we will talk about the Shirildy River. Exactly here Doppelmair once found the “Siberian gold” - the Baikal sable; today people come here for hot springs and excellent fishing...

We have already written about clean and incredibly cold water of Baikal a countless number of times. But we want to remind you that these properties of Baikal water are due to numerous rivers and streams that flow into the great lake from all sides. These include the Shirildy River flowing through the territory of the Barguzin Nature Reserve; this river is also known under other names, no less peculiar and beautiful than the first one...

The Polysemic Name of One River

Shirilda, Shirildy, Shirigli, Sirigli are the names of one and the same river flowing down from the slopes of the Barguzinsky ridge and heading to the west.

Explaining its name brings no clarity. They claim that its basis has Evenki roots, where “seri” means “war, army” (Sirigli). There is also a connection with the Buryat toponymy when deciphering Shirildy (Shirigli) –“shereldee”: it means “a tuft” (“a bundle”).

Some believe that the river has long been famous for the presence of taimen fish, therefore, they denote it as “taimen” river.

The length of the waterway is not very impressive: it makes up a little more than 22 kilometers, along this distance Shirilda is divided into two arms. Around its mouth, it forms a rather significant delta, some people call it “Shirildy” Gulf. The river possesses a mountainous and taiga character, but there are virtually no rapids on it, only riffles and debris.

Georgy Georgievich Doppelmair - the founder of the reserve management of Russia, - left a lot of valuable information about his travels on the coast of Baikal. In particular, we can get acquainted with the world of the Shirildy River that has not changed much until today (the style of narration has been preserved). 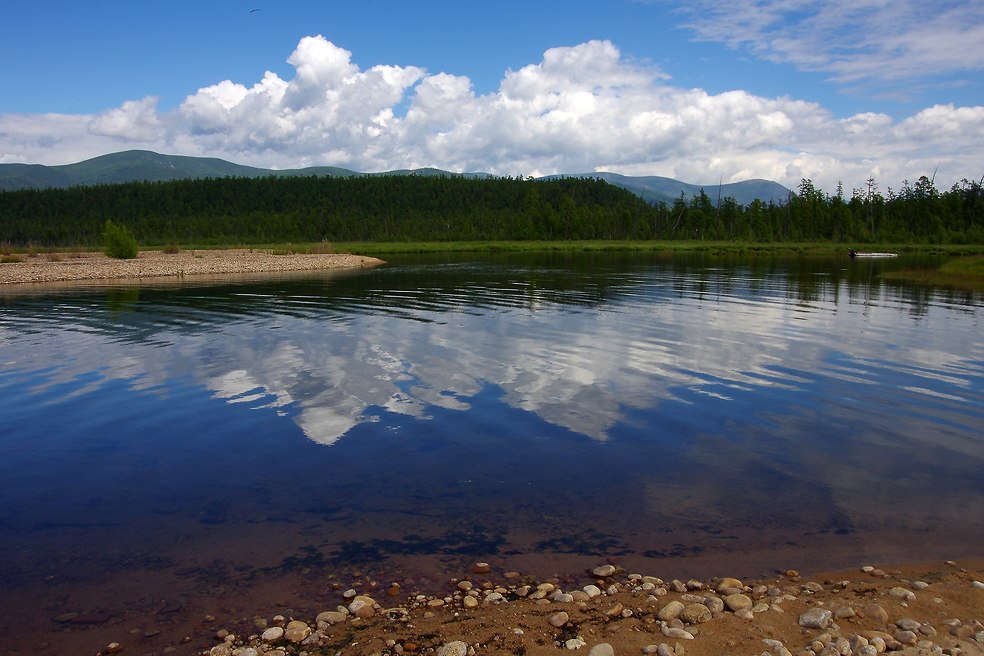 “The Shirildy River of Russian industrialists, or Shirigli River of Tunguses, flows into the eponymous bay; the mouth of the Amnundakan River is situated to the south of it.

The Shirildy River is formed by the confluence of two rivers - the right Deinda (Neinda) River and the left Annu River.

Shirildy flows to Baikal, almost precisely in the western direction with a slight deviation of several degrees to the north. The gorge of the Shirildy River is wide, 2 to 4 versts (2.1 – 4.2 km), bordering a highland valley with elevated rounded outlines, covered with vegetation; the places that are not covered with vegetation expose outcrops placers and bedrock.

There is little forest in the Shirildy gorge, sometimes the forest extends in a band not wider than a verst (approximately 1 km).  The slope exposed to the sun and the northern slope (“siver”) are both occupied by placers and thickets of elfin cedar, now uninterrupted, now more sparse.

In the lower reaches of the river the forests have mixed nature: sparse larches with cedars, spruce, birch and undergrowth of spruce and cedar; the cover is presented by dwarf birch, heather, blueberry briar; there are meadows in some places. The sloping hills limiting the valley of the river are overgrown with dwarf cedar. Up the river pine can often be seen in the forests, and a section of purely pine forest adjoins the river.

The gorge gets narrow in the upper course of the river. Cedar prevails on the northern lops, pine and deciduous forest - birch and aspen - are dominant on the sunny slope, the trees grow in a narrow strip there.

In general, almost complete absence of “dark” forest - cedar forests and fir forests - and abundance of deciduous species in the Shirildy gorge strikes the eye”.

This was the name given to Shirigli by Georgy Doppelmair. According to his information, the places inhabited by sable were located at a distance of 5 versts (5.3 km) to the north from the coast of Baikal, “but it was difficult to catch the animal at these places because of alluvial deposits and cedar thickets.

The sable in Shirilda is of lighter color and of medium quality. The animals of high value are met very rarely, less often than in other rivers of Podlemorye, which is associated with the fact that there is little “dark” forest - thick cedar forests, on the contrary, there are many foliage trees.

Such hoofed animals as red deer and roe deer (rarely) can be encountered in the lower reaches of the river; red deer is widespread further up the river, where reindeer can also be found. Siberian musk deer lives in rocky places. The number of hoofed animals is relatively small, due to the lack of good feeding places. Bear can be met only rarely. Ermine lives in the upper reaches of the Adarkar spring; Siberian marmot and rock rabbit also live in the same place”.

How Shirigli Can Please Tourists Nowadays 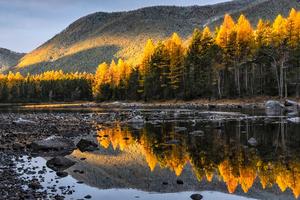 The border of the Frolikhinsky Game Reserve passes on the left, southern bank of the river, whereas the river itself flows within the territory of the Barguzin Nature Reserve. Already this unique location guarantees a meeting with the unique beauty of the Baikal nature.

The upper reaches of the river are located within walking distance from the hot springs of Khakusy where you can swim at any time of the year.

The mouth of the river provides safe berths for small vessels, which cannot but interest travelers. It is appropriate to recall that one of the meanings of the name of Shirilda is “taimen” river.

According to the reviews of those who were lucky to come here in summer, in June and July, the river creates an association with a bright cheerful girl, dressed in lush greenery, a bit mysterious and seemingly unpredictable.