The Most Recognizable Duck of Baikal

We continue to familiarize you with the birds of Baikal. Ruddy shelduck is a duck that has become a symbol of peace and tranquility for Baikal Buddhists and which is mistakenly confused with geese...

Ruddy shelduck is called so because of its tile-red feathers. Ruddy shelduck is a constant transitory species of the western coast of the Southern and Middle Baikal, nesting everywhere on the lake, especially on the Island of Olkhon. Researchers define Ruddy shelduck as a common, but numerically insignificant bird species found on Lake Baikal from late March to late October.

It is notable that Buddhists consider this bird sacred, and, in their opinion, it can bring peace and tranquility.

According to the hunting rules of the Russian Federation, it is forbidden to shoot ruddy shelduck, because it is a rare bird, and the greatest danger threatens the duck during the hatching period when the bird lets poachers come very close to its nest.

It Is Rather a Goose than a Typical Duck 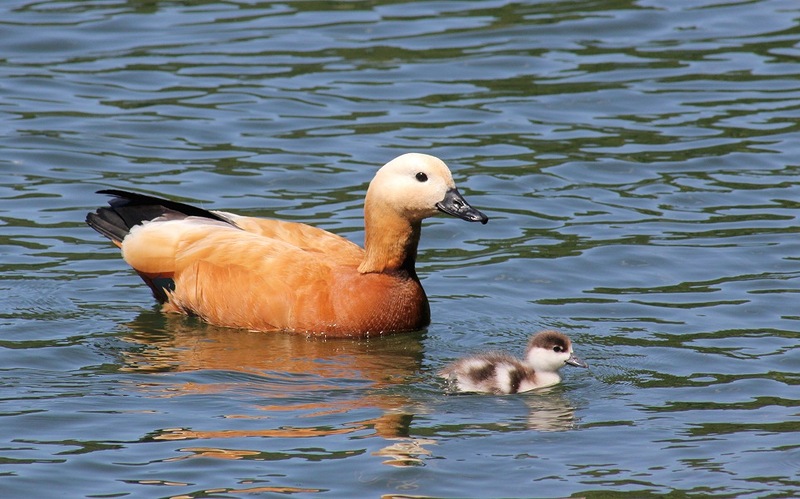 If you see this large bird with its weight ranging from 1200 to 1600 grams, you can mistakenly say that it is a goose. In fact, it has long legs, a short beak, a long neck, wide blunt wings, special posture... The length of a torso of a ruddy shelduck makes up 61-67 centimeters, and its wingspan can reach almost 1.5 meters.

A distinctive feature of the ruddy shelduck is its orange-brown color with an ocher-white head and neck. The greenish tint is characteristic of its black tail and uppertail; the duck’s beak, legs and primary wings are also black against the general background of white wings.

A flying duck has clearly visible large white spots in the upper and lower parts of the wings (covert feathers) and a green spot, the so-called “mirror”, on the front edge of the secondary wings.

Male and female ducks have little difference from each other in their colors. The only difference is the narrow brown collar of males during the mating season - it disappears during the seasonal change of feathers.

Young birds are of the same color, albeit more pale.

They Should Have an Angelic Voice...

Ruddy shelduck is a very “talkative” bird. According to the description of the ornithologists, the most frequent sound uttered by them on the ground and in flight is a loud deep “ang...” or “gang...”, sometimes extended to two syllables and sounding like “a-ak...” or “wa-ak…”. At the end of this cry, one can often hear a dull trill sounding as “arrrr...”.

Scientists compare the bird’s sharp voice with neighing of a donkey and with the sounds uttered by the Canadian geese, as well as with cackling of geese.

The sounds can help you distinguish the gender of a bird: females usually utter louder, deeper and sharper sounds, with a predominantly stressed “a” vowel, whereas males mostly shriek with an “o” vowel.

The Coast of Baikal is their Home

The coast of Baikal is gradually ceasing to be a comfortable habitat for many traditional bird species, including ruddy shelduck, due to the constantly growing flow of tourists and a large number of fires.

However, once the Olkhon region was the favorite habitat of this bird: the islands and coast of the Maloye More Strait, including Olkhon, Tazheransky steppes, the steppe massif of Krestovskaya gorge. 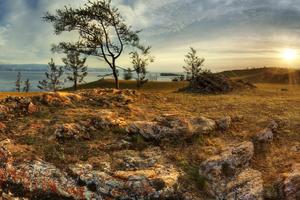 The Island of Olkhon: 300 Days of Sun and Wind

The ruddy shelduck was attracted both by the coastal zones and the inner part of the island of Olkhon. The most outstanding thing was the saline mineralized Lake Shara-Nur (“lake with yellow waters”, as translated from from Buryat) surrounded by a birch-pine forest. In the recent past, the “yellow lake” was the main breeding ground of the ruddy shelduck on Olkhon, and the number of chicks was counted in dozens.

According to the observations of specialists, the situation has been gradually stabilizing in recent years, but it is still too early to be satisfied with the number of birds.

This duck is equally mobile both on the ground and in the water: it runs quickly and easily, swims and dives perfectly. They note that even a wounded ruddy shelduck is able to dive well.

The duck finds food both in water and on land. It feeds on various wetland and aquatic plants, ruddy shelduck mostly eats plant food - seeds and green shoots, but it can also grab and swallow insects, including locusts, grasshoppers... Occasionally the duck can find mollusks, crustaceans, small fish and even frogs in water.

Ruddy shelducks try to rest during the day, and search for food at night or at dusk.

These ducks are considered to be very cautious and unsociable birds, they are not prone to formation of large flocks. As a rule, they live in pairs or small groups, and these groups join with each other and form a flock only in late autumn.

With spring comes, it is the time for nesting, and immediately after arrival to its summer habitat, ruddy shelduck has a goal - to find a mate. It is considered that a female duck is choosing a suitable mate itself, thus finding a lifelong partner.

The duck is extremely undemanding to the living conditions. The presence of a water reservoir nearby is enough to create a nest in this place.

For building nests these birds also use gutters of rocky coast sections, crevices of rocks, hollows of larch trees, abandoned burrows of steppe animals. The simplest option is a hole in the ground lined with thin blades of grass. They often lay eggs directly on the ground and line them with a roller made of fluff.

Ruddy shelduck comes to Baikal at the end of March – in early April, and immediately starts to lay eggs, and then females incubate these eggs. Fathers perform security functions, being constantly around and on guard for possible danger. Defending a home, a male shelduck can violently attack an unwanted guest, even a sea eagle. And the female protects its future offspring by issuing a hiss, very similar to a serpentine sound: this scares predators away.

Small downy chicks hatch on Baikal in early June; at the age of 45-50 days they already learn to fly. However, the brood still keeps together.

Interestingly, ruddy shelducks can use the same nest for several years in a row.

People can influence this situation and help this ordinary but numerically insignificant duck species to become a regular guest on the coast of Olkhon again.