An eternal pilgrim, a dangerous forest thief, a merciless predator and an awful glutton: all these are the descriptions of the Siberian wolverine, a small animal resembling a bear and a marten at the same time that is able to hunt animals that are several times larger than the hunter itself...

A very peculiar animal – wolverine – can be encountered on the lands around Baikal. One cannot say that locals adore the animal, moreover, “wolverine” is a Siberian generic noun associated with awkwardness, stupidity and mischievousness.

Is it really so? At first glance, the wolverine indeed looks like a shaggy bear cub, awkward and rather helpless. But those who saw this creature “in action” cannot be deceived by this appearance. It is a strong, agile, and formidable predatory mammal of the Mustelidae family.

Wolverine is translated into Latin as Gulo gulo, where Gulo means “glutton”.

A Shaggy Predator with the Traits of a Bear, a Badger and a Marten 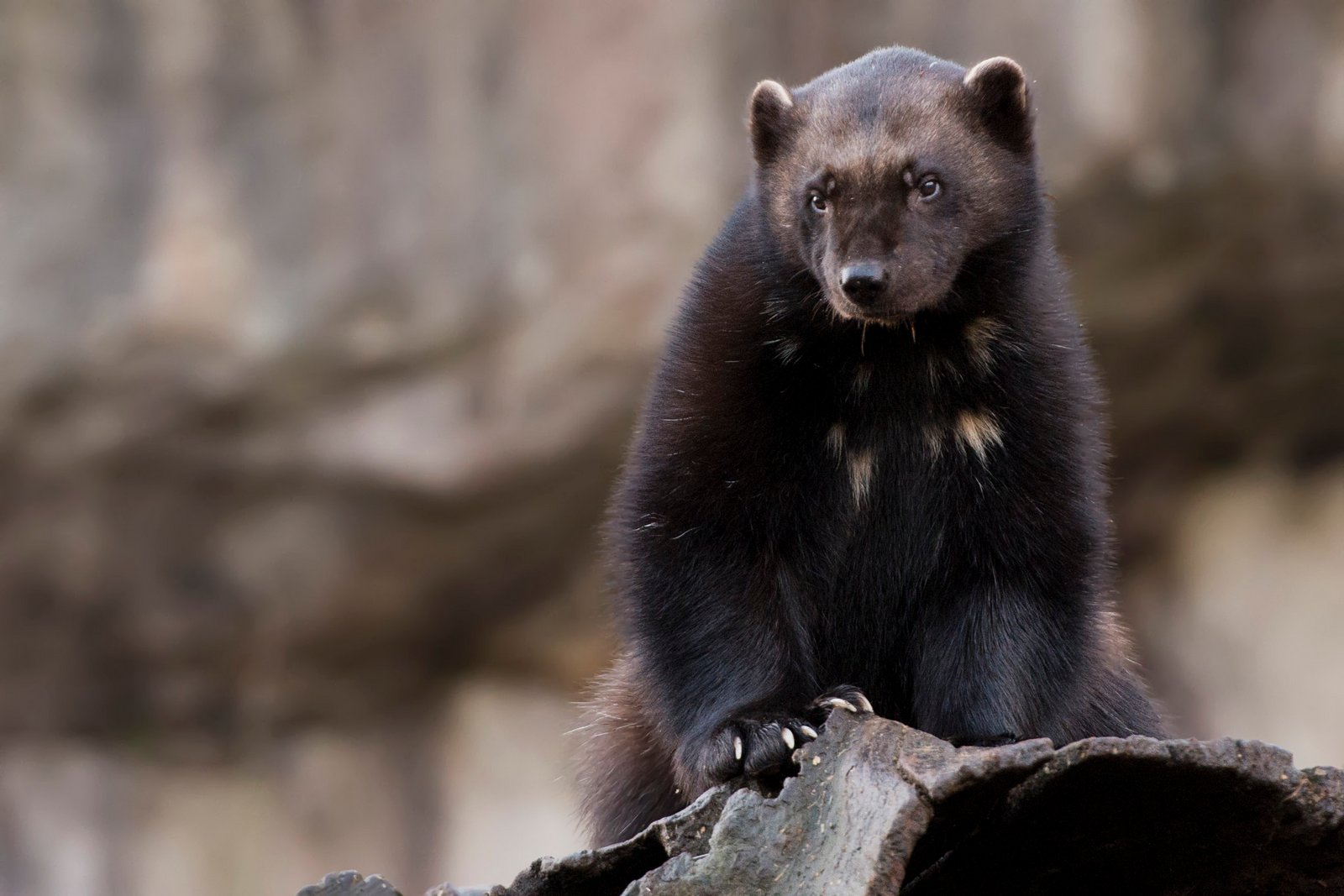 Wolverine is the animal with its weight reaching 15 kg and its height up to 1 meter.

Both the size and body structure of the animal are not quite typical for the rest of the Mustelidae family. In fact, only the structure of the skull and the dental system are the same. The wolverine’s head is large, ears are small and rounded, its muzzle  is elongated (the muzzle and ears resemble those of  a badger and a marten).

Strong jaws and powerful sharp teeth can break any bone or chew any frozen piece of meat.

The body is stumpy, covered with long, thick, pretty coarse fur of brown shades, by the way, the fur does not freeze over in winter in any way: this feature is valued by true connoisseurs.

The animal is also peculiar due to its strips on the forehead and body sides, usually of gray color.

The tail is very fluffy; its length reaches 25 cm.

Due to the fact that the hind legs are longer than the front ones, and the feet are disproportionately large (like those of a bear), the wolverine looks rather awkward with its powerful claws that look as if sharpened. This impression is escalated by the fact that the animal walks standing on its entire feet.

However, precisely due to such wide feet, the wolverine can easily walk over deep snow.

Just like a skunk, a wolverine can produce a pungent substance with an incredibly persistent and nasty smell (secretion): this smell cannot be removed with almost any detergent. This greenish liquid is used by the animal to protect itself against the enemy; and the wolverine is able to throw a jet of this liquid at an enemy from a distance of more than a meter. But the process of secretion can also be spontaneous, caused by fright or a state of stress.

If this “present” reaches the face of another animal, it may lose its sense of smell and will surely be expelled from the pack of its counterparts. 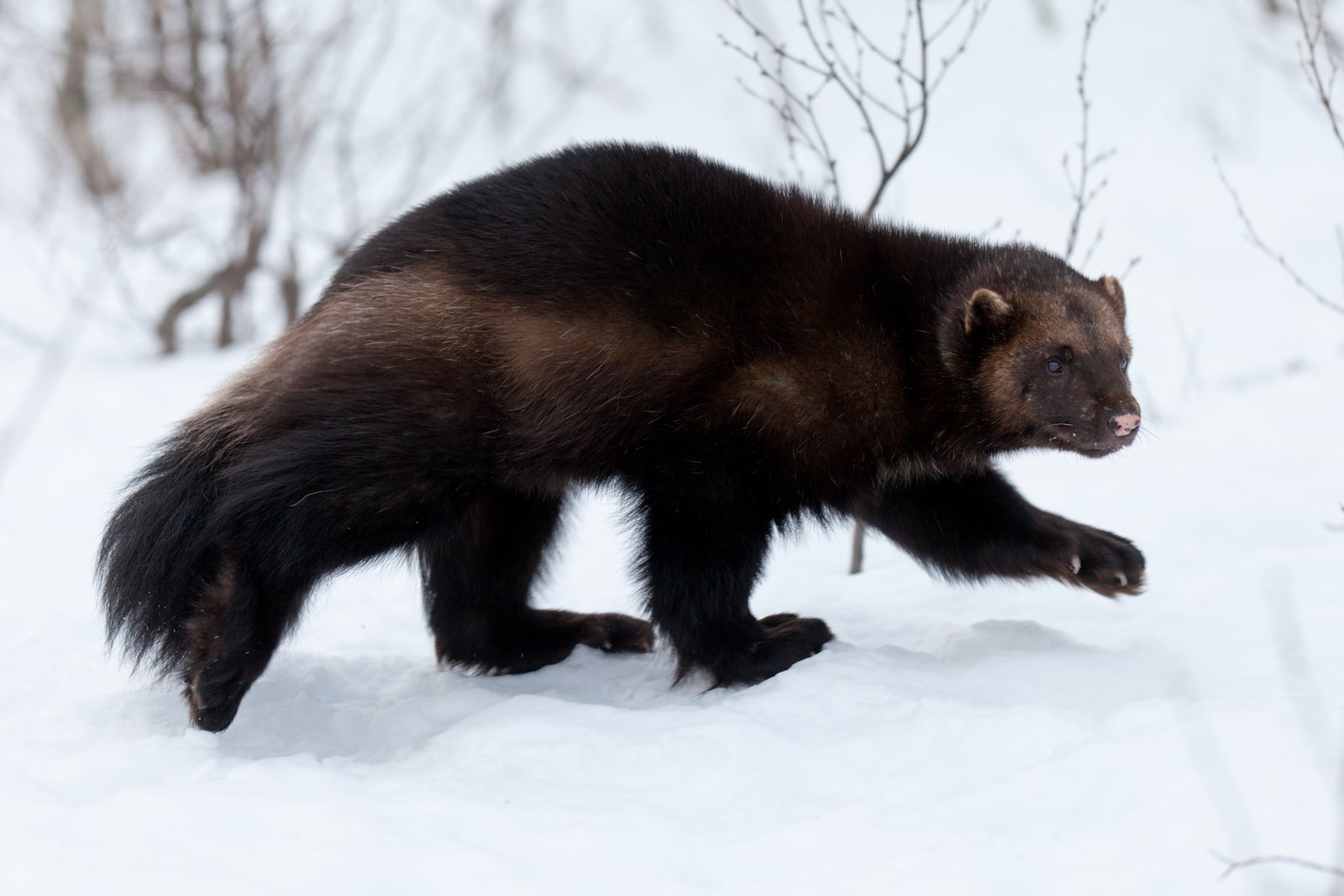 Wolverine is an unsociable animal. Isolation and privacy make up the basis of its existence. The animal actively protects the borders of its large hunting grounds against invasions of other animals. The Wolverine is not characterized by a sedentary lifestyle, on the contrary, it regularly moves through its land plot, walking up to 50 km per day in search of prey.

The animal tries to seek shelter in nearly invisible places: under twisted root stalks, in crevices and hollow trunks of fallen trees...

Wolverine is a night predator with amazingly sharp senses of smell, sight and hearing, which enables the animal to follow the scent perfectly well. It is great at climbing the trees, but the wolverine cannot jump from one tree to another.

The character of the wolverine combines impudence and cautiousness. Wolverine does not seek open conflict with large predators like wolves or bears, but handles other animals without mittens, attacking them and scaring them with its spitefully bared teeth or a rough roar. And if the wolverine has to defend itself, it does so desperately, aggressively, and absolutely fearlessly.

Local residents absorbedly tell about the slyness and dexterity of this animal.

Wolverine is a professional hunter, clever and sly. The animal is able to attack deer, musk deer, mountain sheep, and even elk. A case that once happened in the Baikal taiga is widely known: when a wolverine who got tired of being pursued by wolves rushed onto a wolf’s back and managed to gnaw through the wolf’s spine with its teeth, depriving the forest giant of its ability to move.

One of the main hunting techniques of the wolverine is to wear down the prey’s resistance. Wolverine does not move especially fast, but it possesses incredible endurance. It can pursue a prey for a long  time and stepwise, not allowing the victim to eat or rest. At last, the hunted animal loses strength, and the wolverine obtains its meal.

In winter, the wolverine’s best friend is the deep snow. The ungulates move along it with difficulty, constantly falling through, and the peculiar structure of the wolverine’s feet allows it to easily overcome this obstacle.

There are a couple of tactical tricks that cannot be implemented by any other Baikal predators.

Wolverine watches an ungulate hiding on a narrow rocky ledge, jumps on top of it, and fearlessly falls down together with its prey, even in the water, even on a mountain slope. A victim either does not survive or completely loses the ability to resist after such a “flight”.

People also tell about a completely fantastic trick preformed by a wolverine with the use of “tools”. The animal rolls a heavy stone upwards, placing it above the intended prey, hiding on a narrow trail, and then pushes the unsuspecting ungulate off the ledge.

Wolverines are omnivorous. In addition to the large “freshly hunted” animals, it eats the remnants of others’ prey, even carrion; it can always catch a hare, a bird, a rodent.

Depending on the season, the wolverine enriches its diet with bird eggs, wasp larvae, various insects. Wolverine is happy to use the riches of the Baikal forests - honey and berries. The animal often catches fish, especially during the spawning period.

But even this sometimes is not enough for a wolverine. It manages to track down hunters and steal prey caught in their traps. And if the animal gets into a wintering cabin, it destroys the food and the animal skins obtained by people.

Wolverine has only one main enemy on Baikal: it is the common (gray) wolf.

No matter how people treat wolverine, scientists claim that if it lives in the forest, this indicates the good state of nature. And if the so-called “little bear” no longer lives in its native places, then something bad is happening with the surrounding ecosystem.