The Abramikha River, or the Place from Where Omul (Baikal Cisco) Gets into Lake Baikal

We keep on introducing the rivers of Baikal to you. We would like to remind you that there are about 300 of them and they all perform their functions. Today we will talk about Abramikha where the main fish of the lake omul - comes to spawn in autumn.

Many tributaries, large and small ones, replenish Lake Baikal with their waters; however, all of them are different from each other, just like people. Some of them run to the Great Lake along the coastal steppes, others make their way through the impenetrable taiga, while still others flow through marshy places. The marshy rivers include Abramikha - a river in Kabansky district of the Republic of Buryatia, descending from the slopes of Khamar-Daban.

The river got its name from its “parents” – Bolshaya Abramikha and Malaya Abramikha (“Big and Small Abramikha”, correspondingly). Abramikha was formed, thanks to their confluence. The individual length of the river is estimated at 9 km, but often the length is measured from the source of Bolshaya Abramikha, then it makes up already 25 km.

Traveling along the Trans-Siberian Railway, you can get off at the Abramikha station. Nearby you can find the place where the eponymous river flows into the southern part of the Baikal “Posolsky Sor” Bay in the north-western direction.

The Mystery of the Self-evident Name

The toponymy of many rivers in the Baikal region is extremely ambiguous, but it seems that there are no problems with Abramikha. The name is derived from the Russian surname Abramov. But is it that simple? 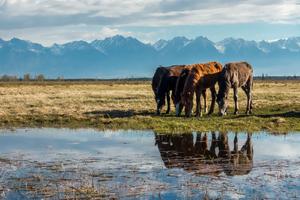 The Great Abyss: Who Was the First to Provide a Description of Baikal

The famous Russian diplomat, map-maker, traveler of the 17th century Nikolai Spathari described his journey through Siberia to the border of China and left a detailed description of the nature of these mysterious places of that time. His description of the Baikal region is still fully used by researchers. For example, Spathari described transitions from one settlement to another, the places where one can relax after a difficult journey, the rivers flowing into Lake Baikal... Let us quote his text: “Now I will describe the seventh refuge – Lake Prorva, located at a distance of one day’s journey from Manturikha; and Prorva is known for the fact that the coast is broken by the sea... and a lake is created... a Big River called Eya flows into that lake; there is plenty of fish caught in that river, and every year flat-bottomed boats come here and are filled with different kinds of fish”.

Explanation: Prorva is a part of the unique shallow Posolsky Sor Bay. The Eya River is absent on modern maps. But some authors believe that this name could be used to designate Abramikha, because it is a pretty recent Russian name.

Fishing not only on the lake itself, but also on its tributaries, can attract even those who have never been fond of this activity. The local nature is distinguished by rare beauty!

The areas that are most preferred by the fans and connoisseurs of fishing are the eastern and southern parts of the coast of Lake Baikal. Shallow and therefore warm waters are located there; the place also has many spawning rivers flowing into the lake. These advantages were noticed long ago; back in the 19th century the fisheries near the Posolsky Sor Bay and along the tributaries, including Abramikha, were leased out to the Posolsky Monastery.

The Posolsky Sor Bay and its mountain rivers are rich in fish. When the ice in the bay breaks up, the fish (pike, ide, perch...) go to Abramikha and other rivers, and after the spawning period return to the “big” water.  When autumn comes, Baikal omul goes to spawn in Abramikha.

It should be noted that scientists distinguish several “subspecies” of omul, each of them is characterized by its own breeding area. For example, the omul of the Northern Baikal subspecies goes to spawn in the rivers of Kichera, Angara, partially Barguzin. The omul from the Posolsky Sor Bay heads to Abramikha or Tolobozikha.

It’s strange but lenok also lives in Abramikha, despite the fact that the fish likes calm pebbled rivers with pits and places fit for sedimentation.

Abramikha is a Specially Protected Territory of ​​Baikal

The Posolsky Sor Bay - the mouth of Abramikha - is an extremely attractive and popular place for summer vacation. On June 1, 1999, a part of the bay and its coast, including the waterway of Abramikha, were included into a specially protected natural territory of ​​local importance - the “Baikalsky Priboy - Kultushnaya” recreational area. It was created to ensure the preservation of integrity of landscapes, the water area of ​​Lake Baikal and its tributaries, geological objects, flora and fauna, the monuments of nature, history and culture.

The recreational area has a large number of hotels, tourist centers, camping sites that can satisfy the needs of the most picky travelers and of those who prefer austere conditions.

The proximity to the city, incredibly comfortable natural conditions with the water that warms up to 20 ° C, the opportunities to enjoy various types of outdoor activities – all these make this piece of Baikal land extremely attractive both for tourists and locals.