A Paradise for a Biologist: the Unique Flora of Lake Baikal

Traveling plants, the fastest carnivorous algae in the world and a shrub that can live up to 250 years. All these are only a small part of the unique flora of Baikal...

Biologist's Day has been celebrated on the fourth Saturday of April since 2001. And if you try to briefly explain what biology is, you can give define it in the following way. Biology is the science about life in all its manifestations, and biologists (botanists, zoologists, microbiologists...) are the experts studying the flora and fauna of our planet.

The “green treasures” of Baikal truly are a unique, inexhaustible opportunity for botanists. Today, over a thousand copies of the flora of the amazing lake have been identified and classified, some of these plants are subject to protection due to the threat of extinction. However, no complete list of Baikal plants has been compiled until now. Therefore, the place is a real paradise for botanists; there is always work for them near Baikal.

We will tell you about some specimens of Baikal plants - diverse, rare and extremely interesting.

A Relic Inhabitant of Baikal 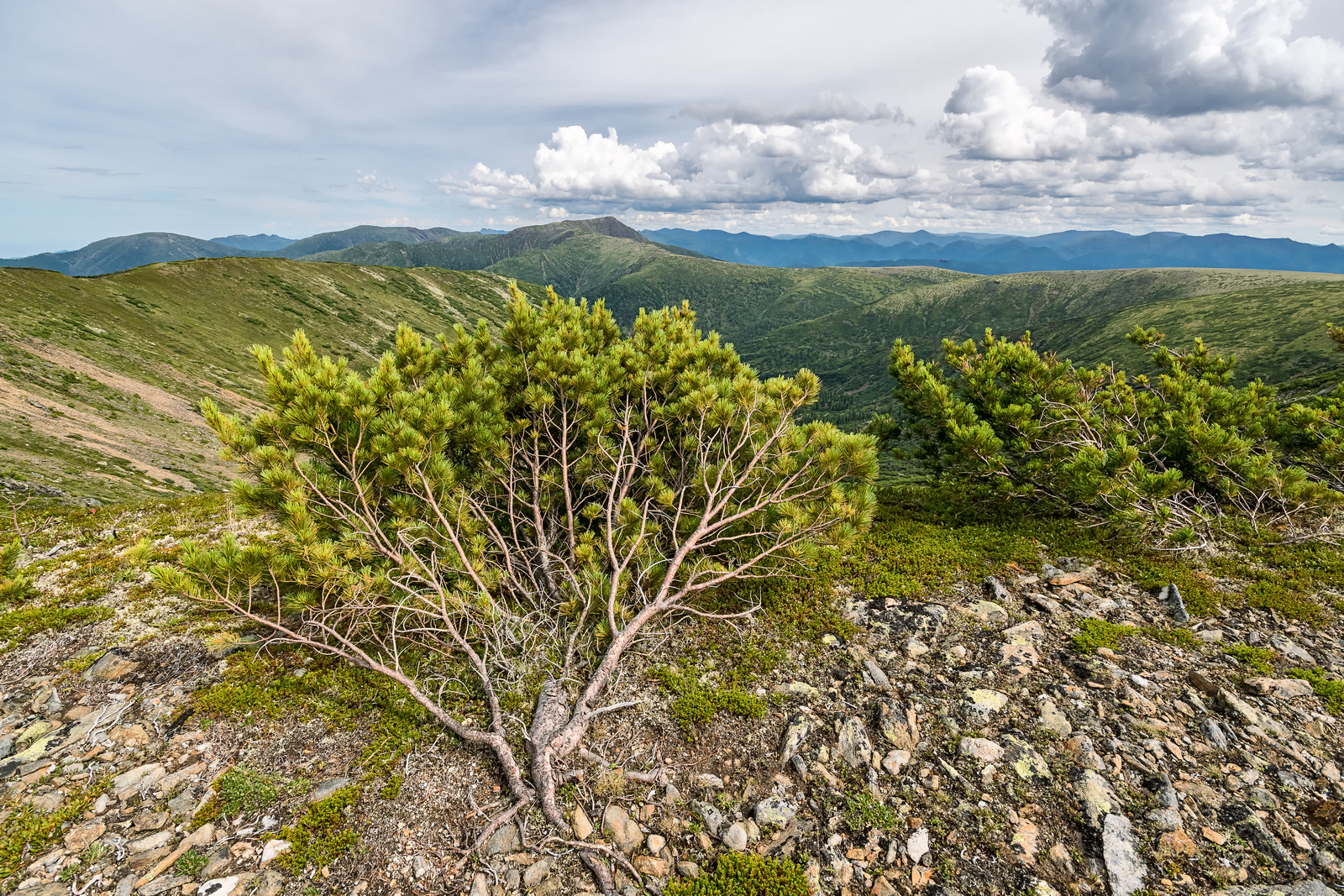 An example of the oldest plant of the coast can rightly be called the elfin pine covering the tops of the Baikal mountain ranges. This plant is a subject of a long-standing dispute of botanists trying to answer the question: is this a dwarf tree or a shrub? As far as elfin pine is akin to cedar, it seems incredibly similar to wooden forms, but its “way of life” is close to shrub species: densely branched (without any single trunk), creeping on the ground.

A wonderful legend provides the explanation.

Once upon a time elfin pine was a tall and strong tree, he could only see its younger brother, cedar, with its head tilted down. Elfin pine was characterized by courage and recklessness, and he became so confident because of his power that he had sworn that he would reach God and dip his beard into resin. The elfin pine went to find god among high mountains that could be reached from the throne of God. The elfin pine was so proud that he did not notice that a little birch who was in love with the elfin pine followed him, worrying about the fate of her beloved.

The elfin pine infuriated God by his stupid words, and when the self-confident tree climbed to the top, he was attacked by storms and winds. But the elfin pine persistently continued his way. Then God sent heavy snow storms, but the stubborn proud traveler continued to climb up through these. But his branches could not stand the pressure and bent. The elfin pine got weak and realized the stupidity of his actions, bowed, asked God for forgiveness and disappeared into the snow. Only then he noticed that the birch was following him and that she had fallen, having lost her strength. He covered her from the snow and closed his eyes.

God was merciful to them. He appreciated perseverance, although it was stupid, sincere repentance, and saved the lives of travelers in severe and high mountains. And until the end of the days the elfin pine can only be bowing and low, but the birch also loves him the way he is. The birch also became a branchy shrub, and now they grow together, protecting mountain passes and peaks from travelers.

To speak seriously, elfin pine is an evergreen, heavily-branched, creeping life form of coniferous plants, incredibly resilient, adapted to the severe conditions of high mountains. Just like the cedar, elfin pine has bundles of 5 needles from 4 to 7 centimeters long, with small notches on the edges. The elfin pine blooms in the summer, after which small lilac cones appear a year later: the seeds are distributed by the bird called nutcracker; squirrel, and sable, and chipmunk feed on these seeds.

Unlike cedar cones, the cones of elfin pine are elongated, shiny, several times smaller. Although the nuts are also smaller in size, but they contain more fat.

Elfin pine grows extremely slowly, but lives up to 250 years. It is believed that the plant is the symbol of health and longevity. 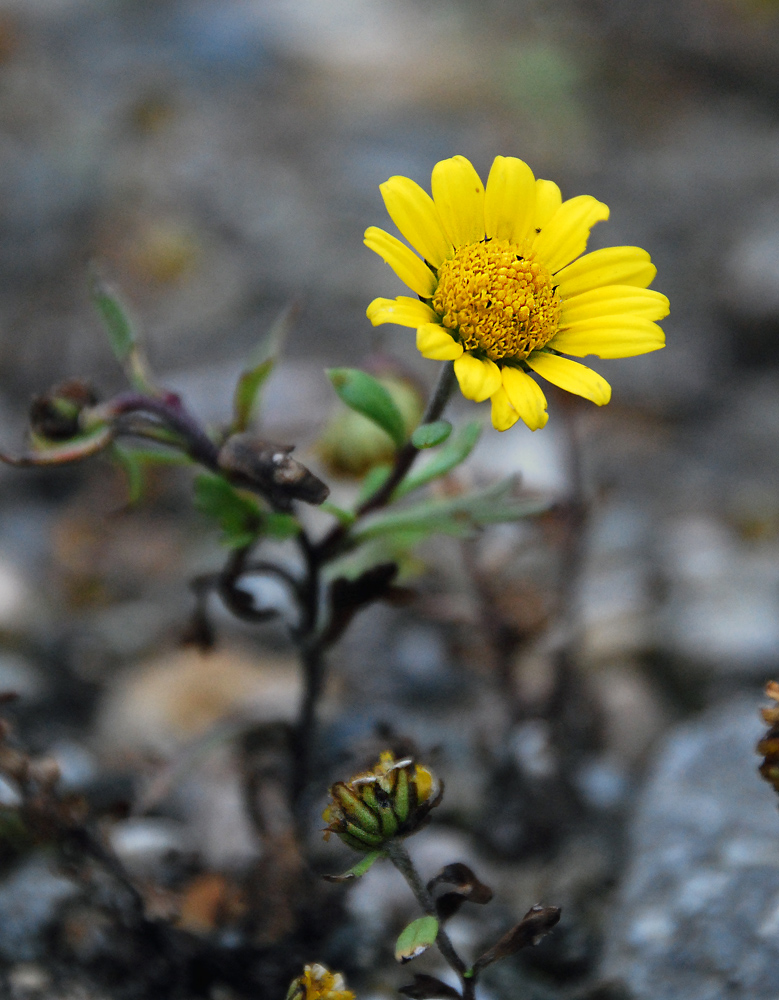 Tridactylina kirilowii is an endemic of Baikal having a very limited geographic range. Almost the entire range of the species is located on a narrow strip along the southern coast of Baikal with the length of no more than 100 kilometers (from the town of Slyudyanka to the village of Vydrino). This is a piedmont coastal plain through which the Solzan River flows. This place is indicated in the Resolution of the Government of Irkutsk Oblast that confirmed the recognition of local tridactyline population as a botanical natural monument of regional importance on January 19, 2018.

Such measures needed to be taken due to the fact that the plant is on the verge of extinction. We must not let it happen. After all, Tridactylina kirilowii is the only specimen of the Baikal flora from a monotypic genus (a plant genus consisting of only one species), which is extremely “important for the preservation of the biodiversity of the region”.

Tridactylina kirilowii is a Baikal aster, with a stem up to 40 centimeters high and single, bright yellow flowers. The requirements for its growing conditions are extremely specific: the sunny side of the gravel flats, wet sand, clay and loam soils, steep river banks, artificial railway slopes...

The Ecologist and Baikal researcher Aleksei Gulin says that “the uniqueness of this endemic plant is the fact that it is constantly moving, changing its growing place. It moves from one territory to another, besides, it migrates unexpectedly and over long distances. It grows... in places where there are no other plants. It does not like to be surrounded with other plants, in such case the flower immediately moves to another place. ”

Tridactylina is not a perennial plant and, unfortunately, is not highly competitive, therefore it is regularly threatened with complete extinction. Preservation of this rare species is a constant concern of the botanical community.

The Fastest Carnivorous Plant in the World 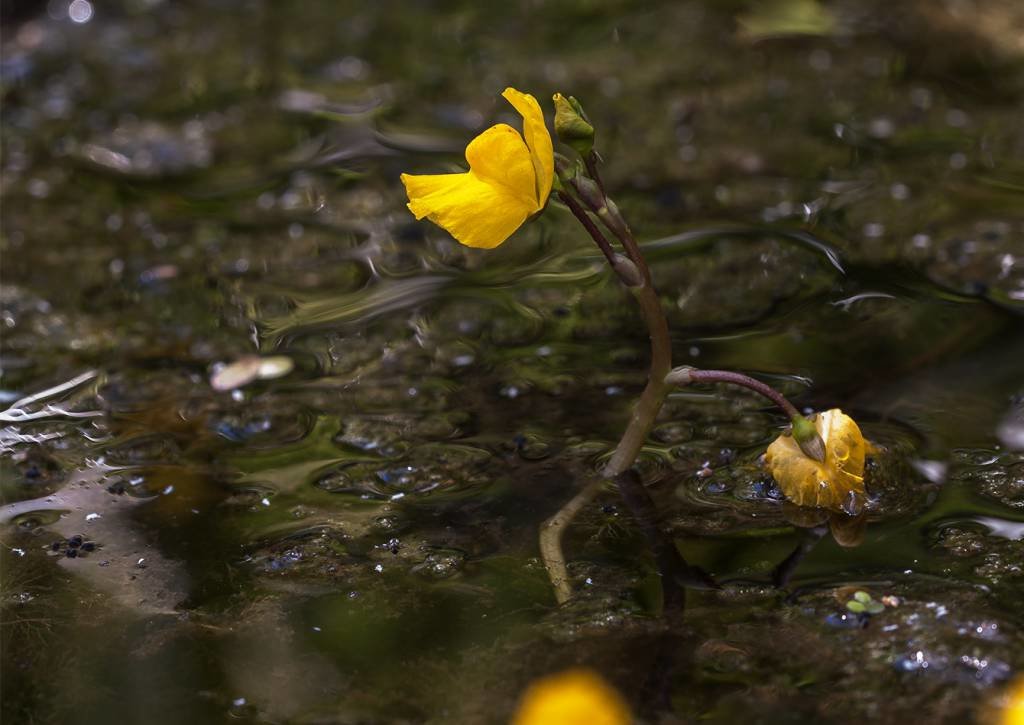 Bladderwort is an aquatic perennial plant, different from other representatives of the flora in the method of its reproduction and the ways of obtaining food. This alga is constantly drifting throughout the water reservoir, preferring still pure water. Therefore, it has so many habitats on Baikal, both southern and northern. There are three types of bladderwort on the lake: ordinary, small and medium. The difference between them is the length of the shoots, as well as the location and size of the bladder-like traps (hence the name – “bladderwort”).

Initially it was believed that the bladder traps were peculiar buoys that did not allow the algae to drown and helped them to move along the water surface. But their main purpose is quite different. The fact is that bladderwort is a carnivorous plant, a predator. But the role of the teeth and tusks is just played by the bladders that supply the alga with food. The leaves of the plant are covered with bladder traps, each provided with a green valve opening inwards. The valve door opens, if its sensitive antennae are touched, and  a the little creature (a fish or an insect) is caught in a trap. And the prey is caught instantly, with an incredible speed. Naturally, the question arises: why does the victim is intereted? They are attracted by smell and color. Outer cells of the trap excrete a sweet substance, and the valves themselves are colored bright blue that is clearly visible against the background of green leaves.

In conclusion, we want to remind you: it is no coincidence that almost every fourteenth Baikal plant is listed in the Red Book.