The Holiday of the Forest: What Makes the Forests around Baikal So Unique

© Photo: www.depositphotos.com
“The Patriarch of Olkhon” and “Mother Tree”: you can find the trees with the official age of about 500 years in the forests around Baikal. In honor of the Day of the Forest celebrated on March 21 throughout the world, we will tell you about the unique Baikal taiga and its secrets.
Первый Байкальский

Baikal continues to remind us that the key principle of human existence is Nature itself. In this place the pristine character of nature is revealed by unforgettable views of the lake itself, surrounding mountains and adjacent valleys, rocky rivers and streams, fantastic flower fields, and, of course, endless Baikal forests with their numerous inhabitants.

So much attention paid to this problem, of course, is not accidental. Forests occupy one third of the Earth’s surface. Although the phrase is commonplace, it is true: forests are the green lungs of the Planet. And this is exactly the case! Alongside with the most important ecological functions performed by forests, they are a home and a comfortable environment; they provide the possibility of self-sufficiency to about 1.6 billion people. The forests are the habitat of more than half of all land species of plants, animals, and insects.

However, all environmental, economic, social, medical advantages of forests do not save them from devastation for various reasons; unfortunately, most often these are associated with human actions.

Therefore, it is very important to constantly remind people about the importance of forest ranges, the need to preserve this natural treasure, participate in this process.

The area of forests in ​​our country makes up more than 20 percent of the total area of ​​the world’s forests. The main forest reserves of the country are Siberia, the Far East and the European North.

Forests Can Be Different… 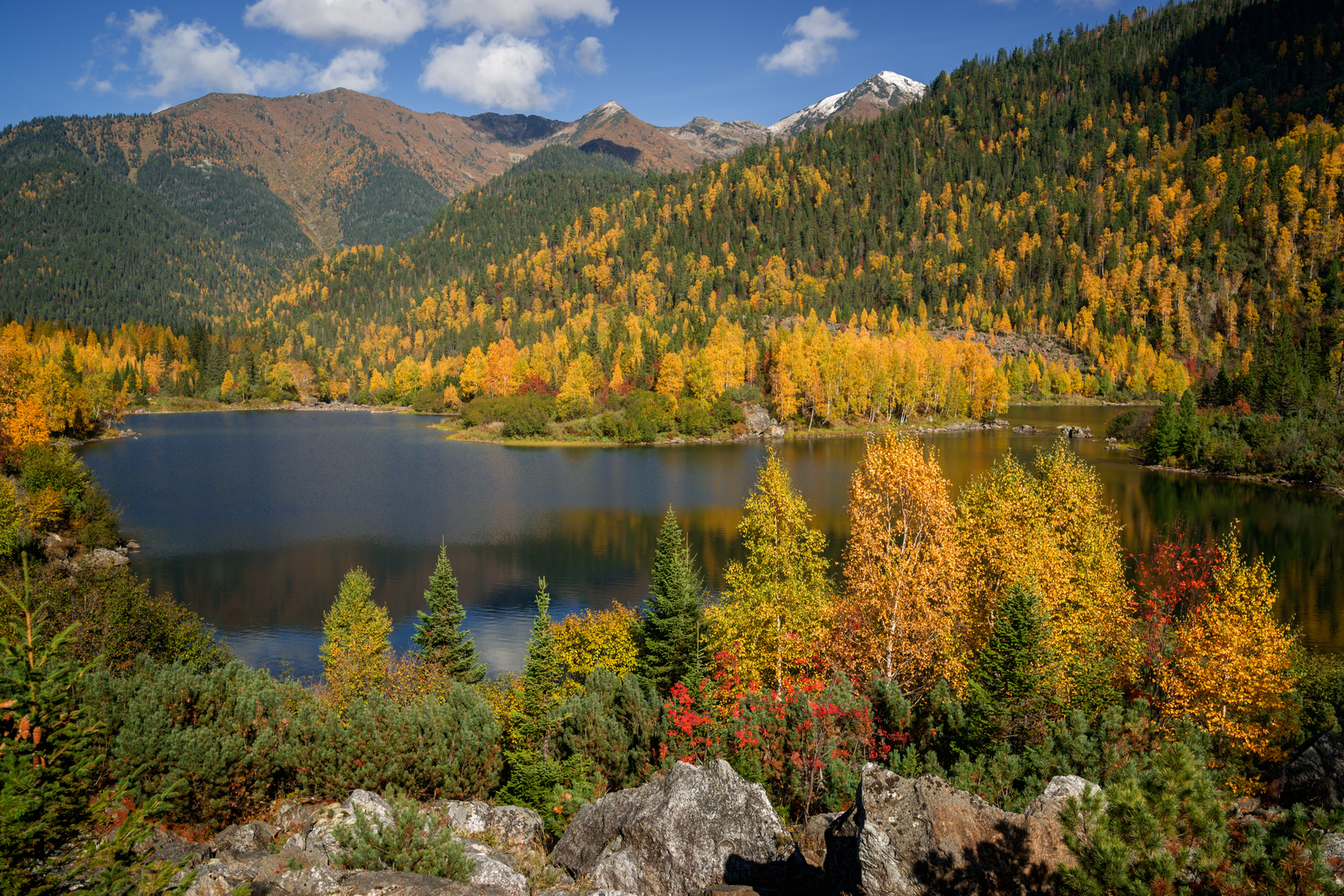 Taiga is a large biosystem characterized by the predominance of coniferous forests consisting mainly of boreal species of spruce, fir, larch and pine. “Boreal” means “northern”. These are forests common for the temperate zone of the Northern Hemisphere. Very often they are called taiga or boreal forests.

Coniferous forest is a forest consisting of trees of one or several coniferous species: spruce, pine, cedar, larch... Coniferous forests are located in the natural zone of the taiga.

Dwarf pine or elfin pine is a small creeping woody plant with the branches spreading wide.

Deciduous forest is a forest consisting of deciduous species trees and shrubs. It is also called leaf-loosing or summer green, which is associated with the annual leaf drop before the onset of cold weather.

Baikal and the Forest

Most people associate Baikal with taiga, but the forest diversity of the lake is a bit larger. If you look at the Baikal region from a bird's perspective, then it may seem that the Baikal forests are endless. Two seas - Baikal and forest - are inseparable from each other.

Let us remember that Baikal is resting on in a unique stone bed surrounded by ridges.

Forests with diverse tree species grow virtually everywhere, beginning from the very base of the mountains. However, the composition of the soil, temperature, humidity, precipitation amount and many more factors are different on the slopes of the Baikal Mountains, and beyond. The species diversity of the forest characteristic of a particular section around the lake depends on the above factors.

Now we want to draw your attention to the next figure - 52 percent. This is exactly the ratio of the lake’s total water catchment area to the area covered by forests. Moreover, this proportion is significantly higher in the western, northern and northeastern parts, than on the southeastern and southern territories.

This is not just a beautiful phrase. It is full of deep meaning. In fact, the forests around Lake Baikal:

- are considered the most valuable storage of wood;

- preserve the purest and most delicious water in the world, providing biological treatment of lake wastewaters, being an amazing natural absorber of pollution, a kind of filter for numerous rivers, and streams flowing into Baikal;

- are a desirable habitat for game animals, and, therefore, a source of valuable furs;

- create excellent opportunities for the implementation of hobbies, such as amateur hunting, of course, within the framework of established rules;

- form the areas with truly therapeutic, pure local air that cannot be compared to anything. They claim, for example, that the number of pathogens is reduced several times under the cover of cedar forests due to the air being enriched with biologically active substances. And the cedar itself is a special pride and treasure of the forests of the Baikal region.

And of course, we cannot but tell you about the aesthetic pleasure people can get in the forest, enjoying these beautiful places. Indeed, all wonderful musical works, paintings, poems and songs dedicated to the Siberian forest expanses have appeared for a good reason.

Interesting Facts about the Baikal Forests

Small-leaved forests dominate the deciduous forests: the trees are birch, poplar and aspen. However, there is one exception. In the lower part of the Selenga valley, one can see several small groves of Japanese elm, a tree belonging to the category of deciduous trees.

There is certain “zonality”, “step structure” of the distribution of forest vegetation from the level of Baikal. But the Baikal Basin is characterized by contrasting climatic conditions, due to which a certain diversity of vegetation can be observed. Being unable to reproduce all the nuances, we will highlight the conventional step structure by the example of the main part of the Baikal territory, where the climate is extremely continental. Coniferous forests grow here, larch forests prevail on the northern slopes, and the southern, south-western and south-eastern sides are the warmest and driest and overgrown with pine trees. The upper part of the mountain belt is occupied by pine forests, whereas elfin pine grows below the zone of bald mountains.

The Features of the Forests of Khamar-Daban 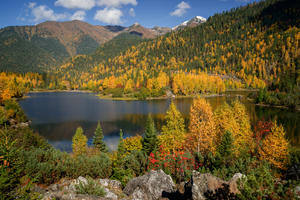 The most interesting situation is observed on Khamar-Daban, especially in its northern part. A specific microclimate has long been formed on this coastal strip considered the wettest place of the Baikal region: thanks to this climate, some relict plants have survived. Actually, many scientists define dark coniferous forests themselves as the most ancient forms of vegetation, putting emphasis on such unique types of trees as, for example, anemone fir, Waldstein fir... There are also relict representatives of deciduous forests - Populus suaveolens. Besides, one of the main features of Khamar-Daban is its fir-trees - the witnesses of the existence of deciduous forests in this place in the distant past: they survived the era of glaciation, and, as a result, began to spread again. Relic silver spruce contributes to the composition of the fir forests in the north-western part of the ridge;

The Width of the Forest Zone of Baikal

In comparison with other vegetation, the forest belt In the Baikal region is the widest. The fact is that its lower limit almost reaches the level of the lake’s water surface (460 meters above sea level). A deviation from this order of things is observed only in the steppe Olkhon region: 700 - 800 meters above sea level. The upper line is determined by the heights of mountain peaks, and therefore can vary from 1,200 to 1,700 meters above sea level. But many people offer to “include” the belt of elfin pines into the forest zone, then the absolute height point will have to be increased by another 100-200 meters

The uniqueness of the Baikal forests, some of which have fortunately never seen people, is that the ages of a huge number of trees reach several centuries: just think about it!

These truly fabulous long-livers are assigned the status of natural monuments in Irkutsk Oblast. No doubt, there are not many of these trees.

Several such long-livers grow on the island of Olkhon. The “Patriarch of Olkhon” pine is considered to be the oldest of them, since its age of 463 was confirmed by the experts from the Moscow Center for Forest Assessment. The height of the “Patriarch” is 19 meters. The Queen of Olkhon is about 500 years old. The height of this pine is 22 meters. It is surprising that its bark has no cracks, and the main branches are alive, covered with pine needles. “Mother Tree” pine is about 300 years old. With its height of 20 meters, its appearance is extraordinary: it is shaped like a bush, due to the fact that it has two short and thick trunks, several small trunks, and numerous branches of different thickness spreading from the trunk.

We must remember that the forests of Baikal are not just some abstract natural resource of Russia, but an invaluable treasure for each of us.