We continue to introduce the rare animals of Baikal to you. This time we are talking about a mysterious red dog: there are a lot of rumors about this animal, but almost all of them are not true.

The coast of Lake Baikal is striking with its beauty and is a habitat of a large number of animals, including truly unique, even legendary species. “The Second Jungle Book” by R. Kipling contains a chapter about red dogs: "Red dogs are rushing through the jungle, killing everything on their way, tearing animals to pieces”. The red dogs described by Kipling were exactly the species we are talking about, however, all these horror stories about their cruelty, ferocity, power are myths that emerged because of the extremely rare opportunity to meet these animals and, therefore, little knowledge about these predatory animals of the canine family.

The red dog is also known as a wild dog, Asiatic wild dog, and Indian wild dog; the animal is called “ulan shono” and “chikalka” in Siberia ... All these names are used to designate that mysterious species of mammals; the reasons for the sharp narrowing of their habitat are not still clear even today.

It is believed that there are 10 subspecies of the red dog in nature. Only one of them (or two, according to some sources) lives in Russia- Far Eastern red dog.

Interestingly, the red wolf received a great honor in 2005 - a silver memorable rouble was dedicated to this animal.

Not a Fox, not a Dog, and even not a Wolf 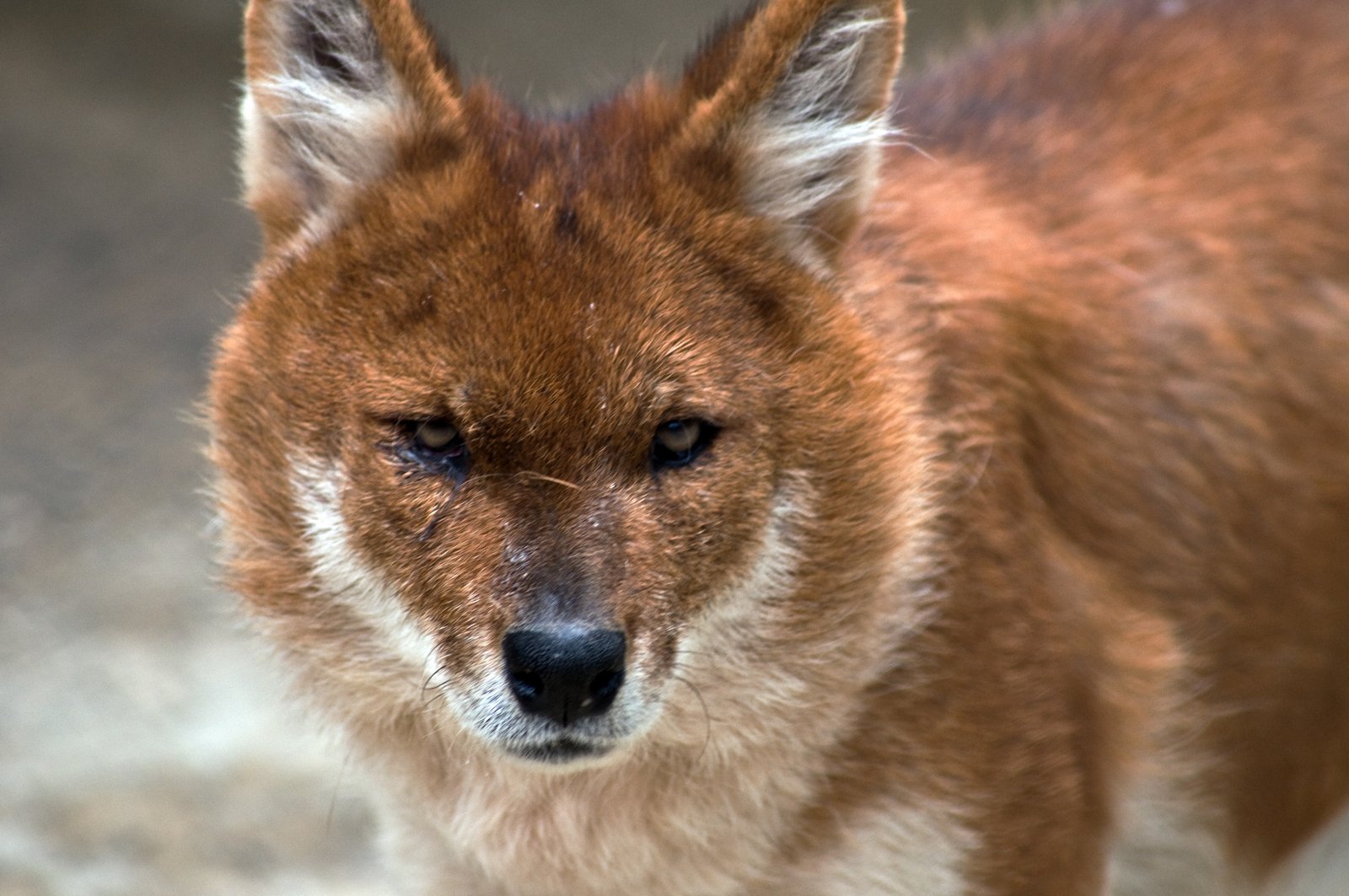 Those who managed to see the red dog with their own eyes, claim that its appearance is very peculiar and only slightly resembles ordinary dogs or wolves. It is rather a metis of a fox, a wolf, and a jackal, but still closer to a fox.

The body of the red dog is elongated but rather slender and neat. Its muzzle is wedge-shaped, but at the same time rather short and wide in the area of cheekbones, the forehead is protruding. The hair on the cheeks and along the top of the neck is rather long, and the ears are very special. They are straight, large, with rounded tips. Due to the close distance between the ears, their position on the head is unusually high. They clearly stand out from the fur, giving the dog’s muzzle a very specific expression, which can definitely be seen on the photos.

Judging by its size, the animal resembles an adult German shepherd, but with the lack of red color, black and brown tint, belly and paws are of a lighter color. A red dog seen from the distance seems, in fact, to be red; whereas an extremely fluffy tail with a black tip hanging almost to the ground gives the animal a special grace. The tail is almost as long as half the dog’s body, with thick hair, their thickness creates an illusion of an incredibly thick tail.

During the winter the animal’s fur is, of course, soft, fluffy, the length of hair on the back, for example, may reach 16 cm. In summer their hair is much shorter; its color is darker, the hair feels rougher if you touch it.

The difference between the red dog and other members of the canine family lies in the lesser number of molar teeth and a greater number of nipples of females.

The red dog’s voice is especially distinctive. All experts point it out that long howl is not characteristic of this species at all; on the contrary, it usually doesn’t howl at all, only utters a sharp, abrupt cry at the beginning of the battle with the enemy. In everyday life, the sounds of the red dog remind the dog’s barking, yelping, and when the red dog is hurt, it is just whining.

Where Does the Red Dog Live?

Back in the 19th century, they wrote about the small number and rarity of the red dog in Russia. However, this does not mean that it has become extinct around Baikal. They believe that Irkutsk Oblast is the northern boundary of the habitat of the species:  it was observed in the Eastern Sayan Mountains, in the Sayan region, in the Khamar-Daban mountains. Researchers told that the wolf was most regularly observed in the basin of the Oka River (a tributary of the Angara), especially near the border with the Republic of Buryatia, as well as in the south of the Tunkinskaya Valley (Buryatia).

The red dog takes care of its self-preservation, choosing mountainous forests and high altitude territory for residence, therefore in Baikal region the animals climb to an altitude of 1500 - 2000 meters - to the zone of bald mountains and high-altitude valleys. But the snow cover makes the red dog descend to the areas with a smaller amount of snow. The animal likes river and creek valleys, due to the ease of movement (low snow cover) and a great number of ungulates that are the basic source of food for these dogs. 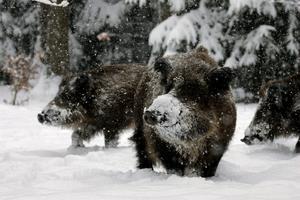 The Black Knight of the Forests - Wild Boar

The red dog is a meat eater. It can kill roe deer, red deer, musk deer, reindeer and even wild boars. It is believed that a pack of dogs needs only two minutes to kill a victim with the weight not exceeding 50 kg. They tear the prey apart. There is some interesting information about the fact that a red dog bites off some meat from the dead animal and eats it alone, separately from the rest of the pack.

Above all, in addition to protein food, red dogs can also treat themselves to food of vegetable origin.

There are known cases when parents gave their offspring not only meat but also green stalks of rhubarb (a herbaceous plant of the buckwheat family) because this plant contains substances that are useful for the bodies of young red dogs.

The Rules of Life in a Pack

The red dog is an animal living in a pack; the relations within the pack are usually not very aggressive. The position of each dog in the community and its role correspond to the behavior and size of the individual. Just like in any dog’s pack, the leader is the largest male who is always ready to show his strength and defend his “noble title”.

Red dogs do not dig special shelters but use natural caves and niches, mountain crevices for this purpose.

Their hearing is perfectly developed, and their ability to swim well and to jump to the distance of up to 6 meters helps them to survive and hunt.

As a rule, red dogs hunt in a group, usually in the early morning or in the afternoon. The animal is generally characterized by an extremely active lifestyle.

Red dogs are very attentive, cautious, agile. Their sense of smell helps them find food. Often they have to jump up, sometimes as high as 3 meters, to find the prey. Red dogs are also extremely patient. They can pursue the victim for quite a long time, up to several hours; at the same time, they hunt in compliance with all the rules of the wolf hunting art. Their speed reaches 50 km per hour. The tactic is simple: a pack wanting to catch the prey forms a kind of arc, trying to drive the future food to an open place (in summer) or ice (in winter), where the prey becomes helpless.

The peculiarity of their attack is the fact that red dogs do not kill the prey by biting its throat. They attack from behind, tearing the victim’s flesh in different directions from each side.

Red dogs are not just monogamous animals, they are also excelled fathers. They take part in the upbringing of the progeny, give the puppies the right to eat first, they protect the lair with the spouse and offspring; young dogs are still dark brown, thick, clumsy, looking like puppies of a German shepherd until the age of three months. And when the mother leaves her puppies for a while, the male red dog plays the role of a big toy: children mercilessly bite his ears and pinch his tail.

Unfortunately, the fate of the red dogs is a quintessential example of the negative impact of humankind on nature.