Horror from the Depths: What is Hidden in the Baikal Waters

Baikal has always been surrounded by ancient legends and mysteries, but new mystical stories connected with the lake appear from time to time. Sometimes they are so extraordinary that they may become a plot of a sci-fi film. “Key to Baikal” will tell you about the mysterious inhabitants of the lake’s depths.

Fishermen on Baikal have long been talking about the light coming from the depths and about the creatures dragging people swimming in the lake to the bottom. These stories resembling the fairytales about water spirits or krakens have been ignored for a long time. However, this has changed over time.

A strange crash of a TU-104 plane occurred near the town of Slyudyanka, on the southern coast of Lake Baikal in 1959. The loss of the plane that crashed into Baikal has not been registered by any of detachments. Before falling into the lake, the captain of the ship allegedly informed the dispatchers about an unidentified flying object moving in the sky. All those present in the control room at that time had to sign a non-disclosure agreement. And the people fishing at the lake nearby saw a flying saucer chasing the falling plane – it accompanied the aircraft until the latter fell to the water.

Half a century later, Russian ufologists organized an expedition to the crash site and spent some time there. According to their version, the accident occurred as a result of the actions of aliens who have a secret camp at the bottom of Baikal in the area of Slyudyanka. Ufologists even found the aliens and made videos of dubious quality, featuring an UFO randomly moving across the night sky. The researchers did not explain why the camp of the UFO or, more precisely, the USO (unidentified swimming object) was located exactly in the depths of Baikal.

Another incident occurred at the bottom of Baikal in 1982. There is little information about this accident, so one has to rely on people’s rumors – just like in the first case. According to the rumors, military divers saw three-meter high humanoids without scuba gears, but in silver overalls and spherical helmets on their heads in the northern part of Baikal. Trying to catch the aliens with a network, the divers suddenly came to surface. Three divers died from aeremia, and four became disabled (there were not enough seats in the low-pressure chamber). There is another opinion: the three dead divers were killed by these unknown creatures. 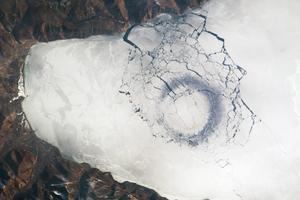 Circles on the Ice of Baikal: It’s Only Science, No Sensation

Some also say that scientists from Irkutsk discovered huge traces of caterpillar tracks of the vehicles that do not exist on Earth at the bottom of Lake Baikal with the help of deep-sea submersibles. Many people recall seeing UFOs in the form of greenish transparent triangles and fireballs hovering over the lake. As a result, there is an impression that an UFO (USO) camp is located somewhere in the Baikal depths. Maybe even two camps. Some says that the camp on the bottom of Baikal is not a camp at all, but a real transition portal between parallel worlds. According to one hypothesis about the origin of UFOs, unidentified objects can be the messengers of a civilization from a parallel world.

There is a version that an unknown rational life form could have emerged in the lake. This assumption could explain the incident with strange human-like creatures in 1982. But can an advanced civilization develop in Baikal now? It is hardly possible.

Interestingly, no other places on Earth are as often called alien camps as Antarctica and Baikal. Everything is clear with the first location: it is inaccessible for people; it is easy to hide there. But what does Baikal have to do with this? There are larger expanses of even deeper oceans where one can hide more successfully than in plain sight almost in the center of Eurasia. However, are there so many places in Europe and Asia that could have such immense depth as Baikal has? The answer is “no”. If the hypothetical aliens had to choose a suitable distance from human civilization and a perfect shelter at the same time, then they would undoubtedly opt for Baikal.

How Can One See Aliens at Baikal?

The atmosphere of the sacred sea invites to mysticism and secrecy, whereas the amazing landscapes and large scale of everything around allows you to imagine quite incredible things. It is easier to see rare natural phenomena on Baikal due to the peculiarities of local conditions. And the stories about “luminous water”, “humanoids in silver overalls” and unidentified flying and swimming objects have not yet been confirmed in any trustworthy way.

Expeditions of ufologists provide conflicting information: first, the camp of aliens is situated in the north of Baikal, then it can be found in the south; first, the unknown creatures were almost caught by military divers, then the aliens shot a plane down. The very idea of existence of military divers in northern Baikal seems rather dubious.

However, ufologists are right in some way: Baikal attracts everyone like a magnet. Therefore, the best way to find aliens in that place is to go there and search for them on your own.