Baikal is often perceived mostly as the largest source of pure drinking water on the planet. But the lake is not only its crystal pure water and the things inside it. It is impossible to think about the existence of Baikal without the living creatures surrounding it, including some very special birds.

“Key to Baikal” has already written about the role of eagles in Buryat shamanism (LINK). It is pretty logical to get acquainted with the real representatives of this species.

People believe that Baikal is inhabited by seven species of eagles and their close relatives – sea-eagles. These include: golden eagle, imperial eagle, steppe eagle, great spotted eagle, booted eagle, Pallas' sea eagle, white-tailed eagle. The stuffed bird of the latter species was presented as an exhibit in the nature department of the Irkutsk Museum of Regional Studies (the stuffed bird was received by the museum from the resident of Irkutsk named Kirillov in 1889). Today this bird species is almost relict.

Sea-eagle is a symbol of freedom, perseverance, audacity. There is another vivid description of the bird: heavenly nobility. The meaning of the name - white-tailed eagle - is completely explained by the look of the bird. The tail is short, wedge-shaped, and actually snow-white. The tail looks like this not from the moment of birth, but acquires such appearance at the eighth year of the eagle’s life. Interestingly, the head and neck of mature birds (their average life span makes up 25 years) become gray (the tips of the feathers become very light-colored), so these parts of the eagle’s body look white in the air, however, against their background one can see how bright the white tail is.

The sea-eagle is considered the largest among all nesting predators of Irkutsk Oblast. The length of the bird’s body reaches from 70 to 90 cm, wing spread - about 2 meters, and weight - up to 7 kilograms. Females are larger than males, which is characteristic of all birds of prey. It’s difficult to confuse the sea-eagle with other representatives of the hawk family, because, alongside with the color of the tail feathers, it has a disproportionate large yellow beak with an expressed bend at its end, its feet are not covered with feathers, and its wing spread during the flight is straight.

The range of the things eaten by white-tailed eagle is quite diverse. First of all, it is fish. Depending on the sea-eagle’s habitat on Baikal, it can be roach, perch, grayling, and burbot. But if there is not enough fish to feed the family, the sea-eagle can easily hunt other birds or small animals. Scientists found the remains of fish, ducks, woodpeckers, grouse, ground squirrels in the places of nesting of white-tailed eagles. There are known cases and of sea-eagles hunting muskrats. By the way, the eagle does not mind to eat carrion, for example, dormant fish.

It is noted that the sea-eagle is not a very skillful hunter. The bird’s large weight is an obstacle. Therefore, the eagle’s actions in relation to other hunters are not “noble”. There is even a special term for this behavior - kleptoparasitism (the seizure of prey from a more skilled but smaller hunter by a larger predator).

We’ll give a description of a very interesting behavioral example reported by one of bird watchers. The described event happened at the beginning of May at the Barguzinsky Reserve. Fish hawks (a fish hawk is a bird of prey, a natural fisher) flew to hunt fish, and one of them was lucky to catch fish right at once. As a result of a rapid attack, the bird snatched a large fish (a grayling weighing about 800 g) after diving into the water. It was hard to carry the prey that was beating in the bird’s claws, so the fish hawk had to slowly fly not far from the surface of the ice-bound Lake Baikal. The fish hawk noticed a white-tailed eagle. The smaller hunter was frightened and rushed around above Baikal, being exhausted, but the white-tailed predator performed a quick and precise maneuver, and the grayling fell down to the ice from the grip of the fish hawk. The sea-eagle did not stop for a second, the bird rushed down in a free and powerful manner, picked up the prey given away without a fight and dragged it away in its claws.

Where and How Sea-eagles Live 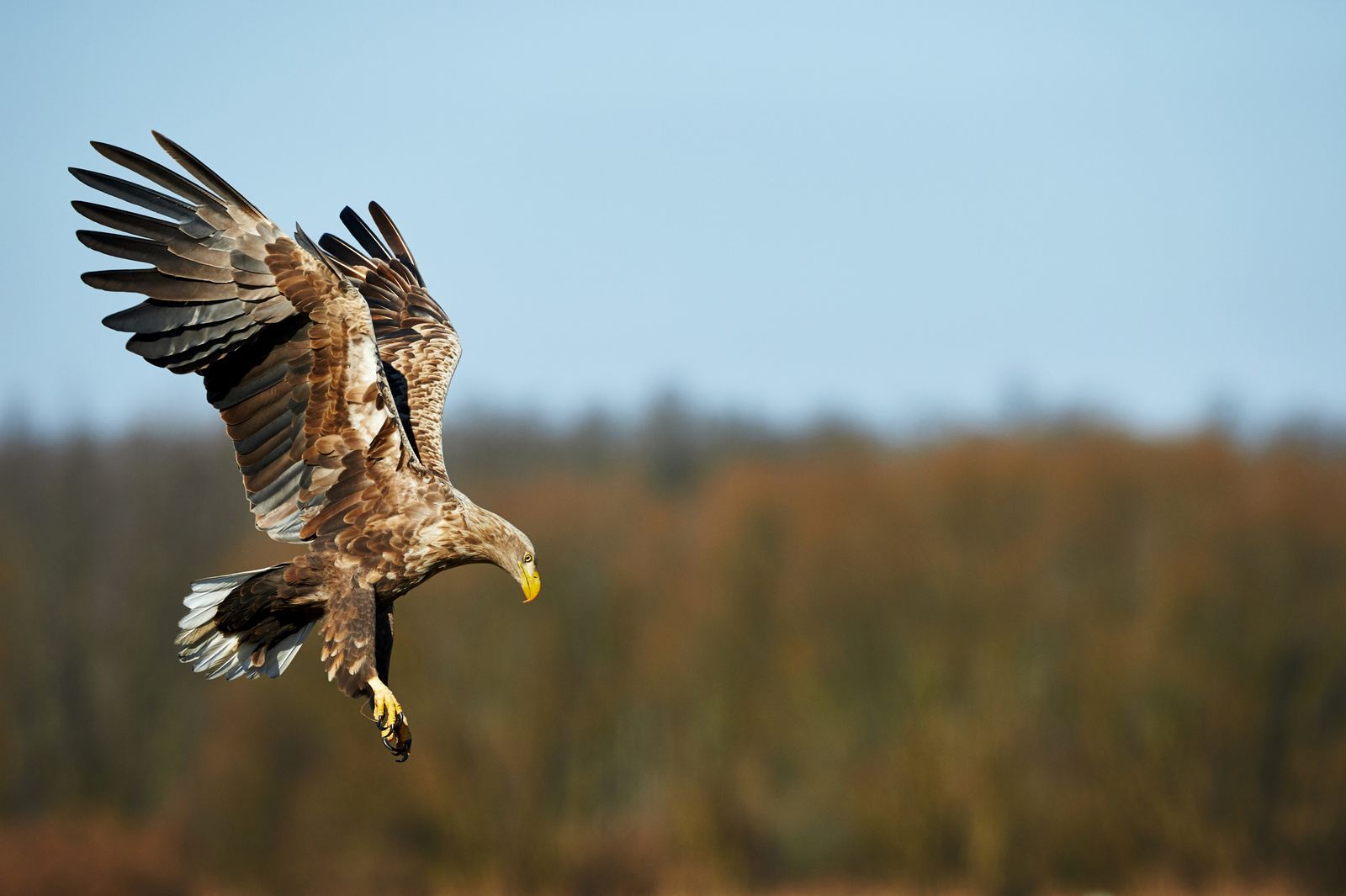 Unfortunately, we are not likely to see white-tailed eagles in the place of their habitat. First of all, the bird settles in hard-to-reach places. White-tailed eagles usually stay at Baikal from late March (April) to October. But there are known cases of wintering.

Sea-eagles build nests thoroughly, most often on tree tops, the nests are massive (diameter up to 1.5 meters, height of about 1 meter), the construction material includes thick branche; the nests are situated close to the water. They usually lay two eggs. There are funny cases of “unauthorized neat sharing” when the nests of a white wagtail (containing eggs) or a tree sparrow were found in the depths of the sea-eagle’s nest. The eagles form permanent couples, are strongly bound to their nest, try to return to the same nest in the following season; and the couple also cares for their hatchlings together.

Secondly, the number of white-tailed eagles on the territory of the Baikal region has considerably reduced. Unfortunately, the explanation is simple: environmental pollution, destruction of their habitats due to fires, wood felling, unauthorized access of people, as well as hunting and poaching...

However, back in the 19th century, the sea-eagle lived throughout Baikal, in 1950s – 1970s the bird lived only at the coast of North and Middle Baikal, on the Olkhon Island, but even then the white-tailed eagle was an ordinary bird of northern Baikal, it was hard to imagine the coves of the Chivyrkuisky Bay without these birds. Today this species is listed in the Red Book of Russia.

At the beginning of 1990s, the estimated number of white eagles amounted to 50-100 couples of birds in Irkutsk Oblast; and during last two decades the sea-eagle can be seen only at the Barguzinsky Reserve and Kabansky Game Reserve ... We are speaking literally about counting the small number  of their nests. In July 2018 an ornithological research recorded only four couples of white-tailed eagles in the delta of the Selenga River.