Tourists visiting the Barguzinsky Nature Reserve can see a brisk curious fluffy animal with a narrow muzzle among the dense fir grove - this is the sable.

Charming and agile predators with beautiful dark fur, relatives of martens, inhabit the vast territory of the Siberian taiga - from the Ural Mountains to the shores of the Pacific Ocean.

The sable has remained a true symbol of Siberia for more than three centuries. As long ago as 1672, during the reign of Peter the Great’s father - Tsar Aleksei Mikhailovich (Tishaishy – “Quietest”) - sables were depicted on the coat of arms of the Siberian Kingdom as a part of Russia. Two sables holding a crown and a bow with arrows personified the main wealth of the Siberian region conquered by the Russian Cossacks led by Yermak and the war leader Voyeikov. During the fifteenth and sixteenth centuries sable skins were a kind of currency: they were used to pay for trade transactions and pay taxes. 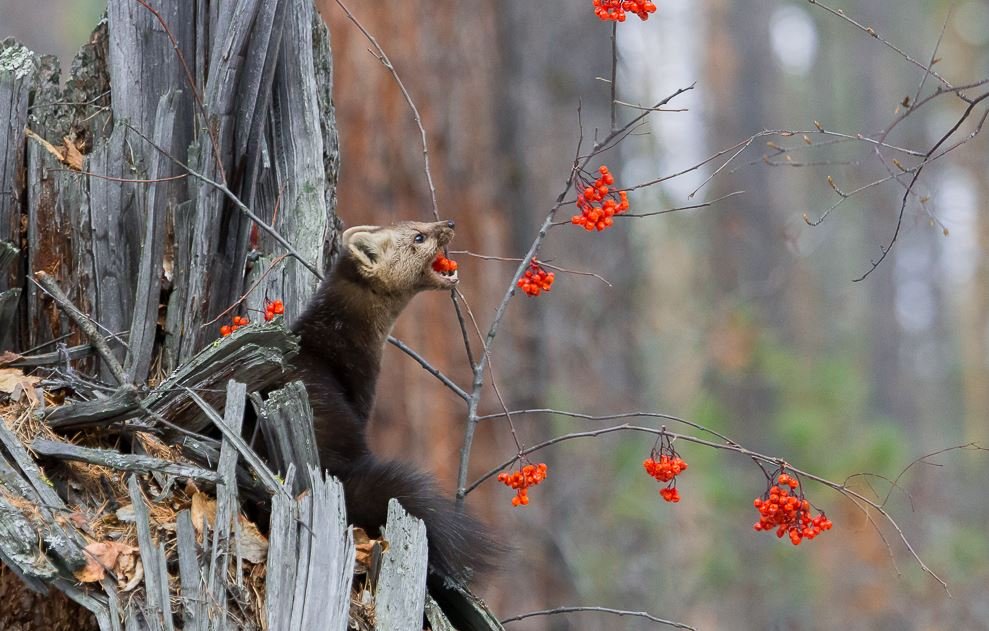 Siberia has long been famous as a centre of fur trade, and the sable has always been a hunting object. The fur trade in sable skins and their exports abroad constituted one of the main articles of the Russian budget until XX century. Soft, thick, silky and durable sable fur was literally worth its weight in gold. The dark fur of the Barguzinsky Sable living now in the vicinity of Lake Baikal is the most expensive and luxurious one among the 17 species of sables known to scientists. A luxurious fur coat made of velvety sable skins is still considered a high-status clothes item.

Russia is the only supplier of sable fur in the world

Siberia has always been associated with the sable occupying the first place in Russia’s fur industry. However, active and long hunt for “fluffy gold” led to the fact that the existence of the sable as a species was under threat of extinction by the beginning of the 20th century. This was supplemented by other negative factors: population growth, forest fires, railway construction, etc.

Then, in 1916, the first reserve in Russia - Barguzinsky State Natural Biosphere Reserve – was created, in order to preserve and protect the symbol of Siberia. It is located in the Northern Baikal region of Buryatia and includes the Barguzinsky Ridge and the coast of Lake Baikal. Zoologists preserve and study the life of the sable and the unique unparalleled nature of the Baikal region on a large area of 3743 square kilometers. Travelers can get a pass to the reserve and engage in educational tourism.

You can see a sable in coniferous taiga forests among cedars, fir-trees and spruces, where the animal arranges its home among the roots of wind-blown trees, in hollows or in dense bushes, and marks the boundaries of its territory. The sable is a very clean animal: its toilet is located outside of its home, somewhere nearby. Barguzinsky Sable has very dexterous and strong paws which have a unique ability not to fall through the snow cover due to the dense and thickset arrangement of the fur villi. The animal feeds mainly on small rodents (field voles, shrews, squirrels), but it also enjoys the fruits of plants: pine nuts and taiga berries (blackberries, cowberries). Sometimes “fluffy gold” can prove to be a real predator and attack larger animals, such as squirrels, hares or capercaillies. In the case of a lean year or a very long and cold winter animals can migrate in search of food to long distances.

Sable’s voice is similar to a cat’s purr

Sable does not have serious natural enemies, although fragile young sables can be attacked by large owls or wolves - despite the fact that the sable does not like open spaces and prefers to move by jumping at the low branches of coniferous trees. The animal becomes sexually mature at the age of two to three years, and 9 months after mating the she-sable gives birth to an average of 3-4 puppies. Mother feeds them with her own milk, and they grow up to the size of adult animals by the age of three months – their length is already 30-40 centimeters. The life span of a sable can reach 20 years.

During the 100 years of the existence of the Barguzinsky Reserve the number and habitat of sables have been restored. Fortunately, thanks to the protective measures on preservation of the sable population, it is currently not threatened with extinction and is included into the Red Book of Endangered Species within the “least concern” category.