Circles on the Ice of Baikal: It’s Only Science, No Sensation

The circles on the ice of Lake Baikal were called a “Baikal phenomenon”, “UFOs’ landing traces” and many other names. The recent sensation excites inquisitive minds, so we are trying to find out what these circles really are.

“Key to Baikal” has already written about one of the scientific theories (“THE SECRET OF THE MYSTERIOUS CIRCLES FORMED ON THE ICE OF BAIKAL IS REVEALED”) suggested by Aleksei Kurayev, a scientist working at the University of Toulouse in France. But we did not stop there and tried to delve into the origins of the phenomenon. What do the scientists constantly working at Lake Baikal, the employees of the Limnological Institute of the SB RAS, think of it? Are not they interested in the things happening on the water reservoir assigned to them? We turned to the Head of the Laboratory of Hydrology and Hydrophysics Nikolai Granin, and it turned out that “no man is a prophet in his own land”: we found out that he was the first man who discovered the circles on the ice, besides, the mystery has long been studied by Irkutsk scientists who even offered their scientifically grounded explanation.

Key to Baikal: Nikolai Grigoryevich, there has been a sudden interest in such a phenomenon as “circles on the ice of Baikal” recently. How long have they been known and why they caused such close attention? 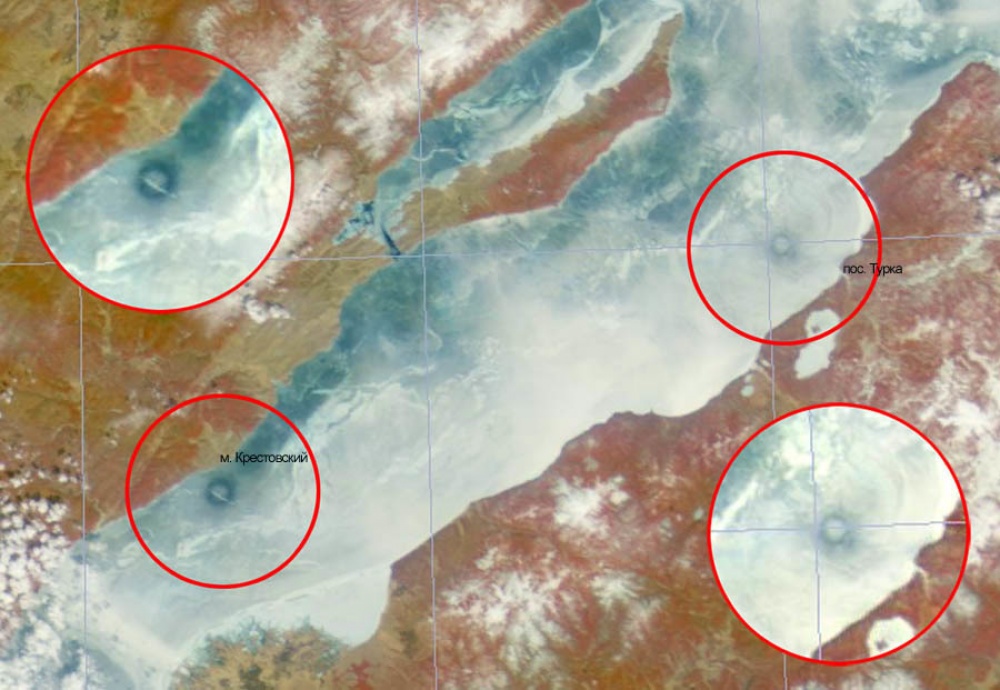 Nikolai Granin: Then we’ll have to start not from the beginning, but from the middle of the story. People started to be interested in this phenomenon back in 2009, when two circles simultaneously appeared on the southern Baikal and at the Svyatoy Nos Cape on April 4. These circles were captured from the ISS, and people started to talk about it. But the circles have actually been known since 2003. I noticed a circular structure on satellite images in the area of the Krestovsky Cape, analyzed the previous data and found similar structures on the photos dated by 1999. Next time ice circles in the area of the Krestovsky Cape and near Turka were noticed in 2005, and in the following years they were observed throughout the middle and southern Baikal. Speaking about the geography of their emergence, this is the area of the Svyatoy Nos Cape, the exit from the Maloe More Strait, there was one circle near Turka, they also appear near Akademichesky Ridge, Krestovsky Cape, Posolskaya Hollow, many circles were found in the western part of Lake Baikal. We found about eight areas where structures were formed only on spring ice. Aleksei Kuraev found even more circles, because he took into account autumn structures that appear due to the heterogeneity of the currents. He also found them on Lake Khubsugul and even one circle on Tyretskoye Lake in the Altai Krai.

Key to Baikal: Have you conducted any studies on the ice in the area of these circles?

Nikolai Granin: Yes, in two days after the appearance of the two circles in early April of 2009 we immediately went on an expedition. We headed for the southern circle on an amphibious boat. We made two ice cuts in the area of the circle structures. We dipped the devices into the holes, took centre punches, ice samples, measured water temperature, observed the directions of the currents. It was clear that in the area of the circles ice was much thinner and broken: this the so-called “needle” ice, fully impregnated with water, having cracks. At the same time it was noted that both in the centre of the structure and on its periphery, seven kilometers away from the centre, the ice was thick: about seventy centimeters. And the thickness of the rim of the circle made up only about 35-40 centimeters.

Key to Baikal: Have any abnormalities been detected in the water samples?

Nikolai Granin: We investigated the water temperature distribution around the circles and the salinity of water, i.e., its mineralization. The chart of mineralization showed that deep waters somehow got into the surface layers. This was also evidenced by the temperature:  in the subglacial layer it amounted to about zero degrees, whereas at an average depth is made up around three degrees. And interestingly, the warmer water was evenly distributed under the ice of the entire circle, throughout the radius of the circle, however the ice in the circle’s centre was thick, but its thickness along the radius line, near the rim of the circle, was two times thinner than that.

Key to Baikal: Did you manage to explain this mystery, in fact, to explain the reasons for the appearance of these circles on the ice?

Nikolai Granin: You see, the ice melts and gets thinner not because of an increase in water temperature, but because of the increased vertical water flow from the bottom to the surface and back. Ice disappears in places where circular currents are generated. And the current is weaker in the centre of the structure, so the ice remains the same as it was.

Key to Baikal: That means, you assume that the reason for the formation of circles on ice is connected with currents?

Nikolai Granin: We investigated the water flow under the circles and noticed that there is an increase in the anticyclonic flow in these places. This increase is indicated by the temperature distribution. Just like in the atmosphere: if you know that there is a centre of reduced pressure, then a cyclonic movement of air clockwise is formed around it. If the pressure in the centre is increased, an anticyclone appears, the air is moving counter-clockwise. The same happens in the water. But if cyclones and anticyclones occupy hundreds and thousands of kilometers in the atmosphere, then the size of a circular flow in the water is determined by the so-called baroclinic deformation radius: simply put, it is the difference between densities, between the speeds of waves’ propagation. This value has been calculated for the winter Baikal, and this radius perfectly matches size of the circles on the ice.

Key to Baikal: Are these circular currents characteristic of Lake Baikal or do they represent some kind of anomaly?

Nikolai Granin: In general, circular currents are characteristic not only of Baikal, but also of any water reservoir. Not only in winter period, but also in summer. You've probably heard the expression “the vortexes of Gulf Stream”? There are main currents, so vortex currents come off them.

Key to Baikal: Do all the circles look alike?

Nikolai Granin: No, they don’t. One should take into account that sometimes these are halo circles or double circles. Their outline is not that clear, it’s not a line, but a wide strip of ice dark with water. At first we thought that their appearance was connected with topography, since the double circles were first seen near the coast of Lake Baikal. But later we found halo circles far away from the coast. Besides, I can surprise you: there are not only circles on ice, there are summer circles, too.

Nikolai Grigoryevich shows a thermographic image of the Baikal surface: a smooth yellow circle can be clearly seen on the even red surface of the warmed water in the middle of the lake.

Nikolai Granin: But here we have an opposite reason: colder water rises from the bottom, and here you are, a circle structure appears. This phenomenon is quite frequent: it can be observed several times a year in different parts of Lake Baikal.

Key to Baikal: Do all circles have the same size?

Nikolai Granin: They are approximately the same. The largest radius is two and a half kilometers. The minimum radius makes up one thousand four hundred meters. If you multiply these figures by two, you’ll get that the average size of circles on the ice: three to five kilometers in diameter.

Key to Baikal: The main mass media expert in circles on ice is considered Aleksei Kuraev who explains their formation by his theory. What do you think about it?

Nikolai Granin: The first publication on circle structures was released by us back in 2005. Four more hypotheses have appeared since then. There is an old version of Aleksei Kuraev about “mega-bubbles”, huge bubbles of methane rising from the bottom of Baikal. But, as far as I know, he refused from that theory. Now he claims that the circles are formed due to currents, but, unlike our studies show, he insists that these are not deep, but surface currents. We think that he is wrong: the circles on the ice are formed in winter when there is no wind and the subglacial currents are very weak.

There is another opinion expressed by Bordovsky from the Chita Institute of Natural Resources. He claims that the circles are formed due to a structural rupture of ice due to the effect of variable heat flows on the ice under the conditions of sharp continental climate, when there are significant differences between day and night temperatures. There also is a version of Balkhanov, an employee of the Buryat Scientific Center of the SB RAS. He believes that the formation of circles is caused by the release of warm natural gas from the bottom of Lake Baikal. The gas is excreted to the bottom layers, it cools itself down, then forms a torus, a “donut” of warm water which rises to the lower edge of the ice and creates a thaw hole formed as a circle. Some scientists jokingly called this version “the theory of an atomic bomb”, because the modeling of a rise of a torus of warm water from the bottom to the surface resembles the contour of an atomic explosion.

However, the hypotheses of both Bordovsky and Balkhanov rely only on satellite images; they don’t take many factors into account. Our theory is the most reliable: it is confirmed by the largest amount of experimental data.