The “Black” Land of Baikal: the Legends of the Ushkanyi Islands 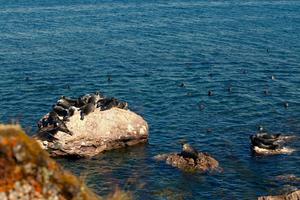 Ushkanyi Islands are often called the Baikal Eden. The purest air, marvelous views, virgin forest, an abundance of the most beautiful fragrant flowers ... The place has its own unique microclimate, amazing weather conditions. Imagine that it is already late autumn or early winter in other places of the lake’s coast, all vegetation has already withered, and everything is covered with deep, thick snow. At the same time, the plants are still green, berries ripen, butterflies fly on the archipelago consisting of four islands; it is covered with a snowy white blanket only in December.

It would seem that nothing terrible, strange, mysterious can happen in this paradise. But, in fact, the origin and name of the islands and the life there is mysterious, hard to explain and very intriguing.

The Legend about the Emergence of the Ushkanyi Islands

In olden days, Father Baikal lived quietly and peacefully, even the water had no waves, only fish occasionally splashed there early in the morning. But Baikal was not bothered, because he loved various living creatures, and, being their father, fed them.

Baikal spent some time in such a peaceful state, only he knows how long it lasted. But one day a monstrous storm hit the lake out of the blue, Baikal had never experienced anything like this yet. Horrifying bubbles formed on the surface of the lake, the level of Baikal water became even higher than before, trying to burst out and flood the coastal gorges and lowlands.

The old Baikal got angry at the storm and said: “Don’t irritate me, you cannot cope with the old man, you are not able to disperse my pure water or dry my home”.

But the terrible storm did not even want to listen to the words of Baikal. It continued to walk on the crests of the waves that have already risen as high as mountains, and said: “Old man, you cannot overcome my strength and power, I raise seas and oceans, I overthrow the taiga with its forest that is hundred years old, I smash the rocks, so I will splash you like a puddle, dry you up like a drop of water”.

Hearing such impudent things, Baikal outraged. As it is known, rage increases power and adds perseverance. Baikal squared his powerful shoulders, remembered his sons and daughters, gained strength and courage and began to fight with the storm. The storm began to worry after seeing the capabilities of the old Baikal, and decided to ask the winds - Barguzin and Kultuk - to help. The strength of the storm increased right at once, but Baikal was clever enough: he began to create obstacles to the storm far away from the coast. Rocks began to rise from the bottom one after another, they were so high that they even blocked the sun. The storm beat against the rocks, spent its energy, rolled back, getting to the coast is already exhausted.

Since then the rocks have become the guardians of Baikal. Over time they got covered with silt and sand. So the size of the rocks gradually increased, they grew, and later turned into islands.

The Mystery of the Name 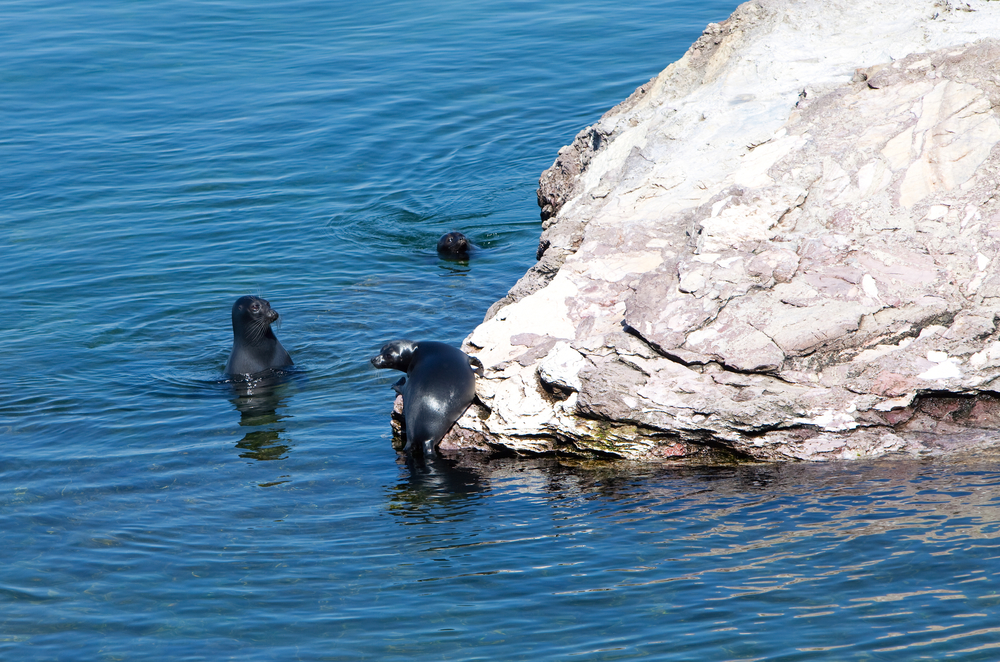 Ushkanyi Islands. Admit that the name is strange, mysterious, and has some hidden meaning. If you perceive its meaning literally, then immediately you start thinking about someone’s ears (“ushi” in Russian), or some mysterious unknown “ushkans”. According to the old legend, once people gave this affectionate nickname to hares. But does not this explanation seem too simple?

The Pomors of the North called the ringed seals “ushkans”. Ancient history has preserved many extraordinary stories about it. For example, even before the Common Era, Chinese travelers noted that some unknown creatures were seen in the waters of the “Northern Sea” (Baikal), their appearance resembling a fish with human limbs and a head, directly referred to as “human fish”.

Buryat folklore has preserved legends about ringed seals, one of these contains a story about a strange human fish living in the lake (“khun-zagahan”). Its appearance was described as follows: “There is a human fish in the sea. The front half of its body is fish, and its back is human. Seeing a man, this fish lifts its head out of the water and screams like a human, and then plunges into the water again”. There is an island legend telling that the Mother Ringed Seal talks in a human voice with hunters and fishermen.

And the main “habitat” of the ringed seals on Baikal is located namely on those islands we are telling you about.

All Shades of Black

The author of an ancient tale about the distant Northern Sea (Baikal) mentioned that there was a black country in the middle of the sea, where black birds, black snakes, black leopards, black tigers, black foxes and other black creatures lived.

How does this correspond to the fantastic, sometimes inexplicable characteristics of the fauna and flora of our fabulous islands?

There are many trees looking absolutely fantastic on the islands: the trees have incredible shapes of trunks and outlines of leaves. There are black trunks of young willows, dark aspens, besides, larches having absolutely no greenery on them seem to be black as well.

- “Ushkanya” birch. There are silver birches and downy birches. Silver birches are covered with black bark; these are the trees that grow in the northern part of the archipelago. Imagine that the black bark is a special case with slightly “open” edges that protect the sides of a birch tree from merciless winds. Moreover, this birch has “non-standard” leaves, with jagged sides, looking very similar to maple leaves; 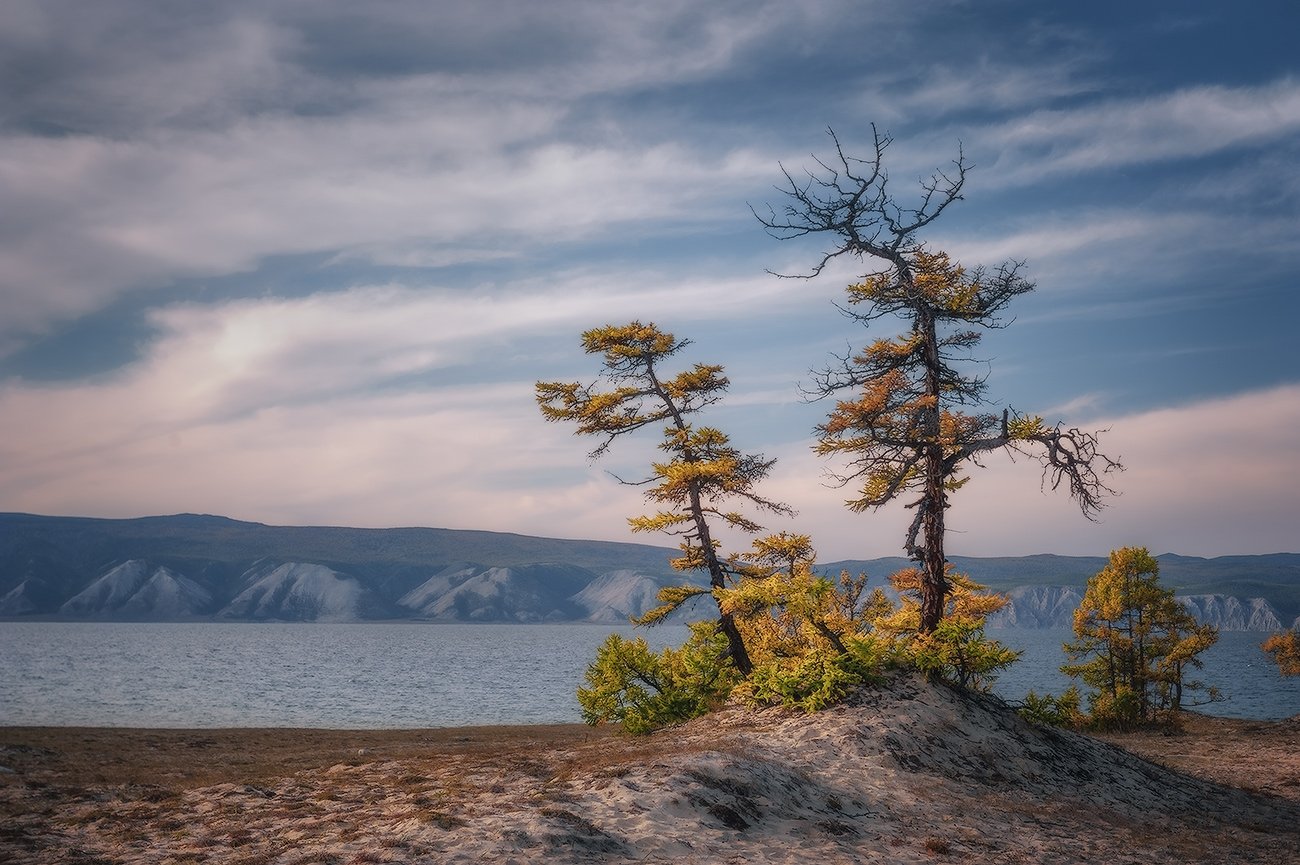 - Dahurian larch characterized by an unusual “bottle-shaped” thickening of the trunk. Approximately at a distance of 2.5 meters, this “swelling” of the thick bark in the form of longitudinal tortuous “ribs” sharply expands towards the base, making the trunk look almost twice as thick as in its other parts. Let us note that this “decoration” can be found only in the oldest and largest specimens;

- “Ushkanyi” aspens also have similar protrusions on the trunk that are also characterized as “napiform”. Everyone who has seen such specimens argues that the landscape looks wonderful. Such aspens, unlike ordinary ones, have the leaves that are not rounded, but with pointed tips.

However, the fauna of the islands is even more whimsical; there is still no answer to the question why the majority of the representatives of the fauna also have an extraordinary dark color: birds, butterflies, snakes, grayling... By the way, even the land is black – due to a large number of caddis flies getting out of the water.

The Ushkanyi Islands are the most mysterious of all the islands of Baikal: they are still arousing the imagination with their unsolved secrets. This once again confirms the fact that there are mirages in the water area of the archipelago. There is a lot of evidence that people observed the following views from the meteorological station of the Bolshoy Ushkaniy Island: the objects that were situated very far away could be clearly visible with the naked eye, at this, they were as if floating in the air. For example, the rocky northern contour of Olkhon Island with the recognizable Khoboy Rock hovered above the horizon and slowly sailed away towards the mainland; or vertical rays of red light suddenly appeared over the Ryty Cape.