The Mighty Hero of the Baikal Forest

One of the most interesting representatives of the Baikal fauna is considered to be an elk, also known as “beamy”.

Such an unusual nickname – “beamy” - is associated with the shape of the animal’s antlers, their fancy shape is also resembling an ancient agricultural tool, a plow. The most powerful animal of the deer family has long been revered by the indigenous peoples of Siberia. They were convinced that the change of seasons was the result of a confrontation between the Heavenly Elk and underground Bear. Moreover, for some of the taiga peoples, the elk antlers were a sign of the Sun. Images of elks can also be found on the rock paintings of the Baikal region.

A large cloven-footed mammal – elk - does not live along the entire coast of Baikal. The animal’s preferred habitat is the pine forest, located, for example, at the dry foothills around the valley of the Barguzin River, or pine areas with smooth relief and waterlogged areas of the river gorges along the coast of the Chivyrkuisky Bay.

Its Antlers Are Branchy, Its Legs Are Long... 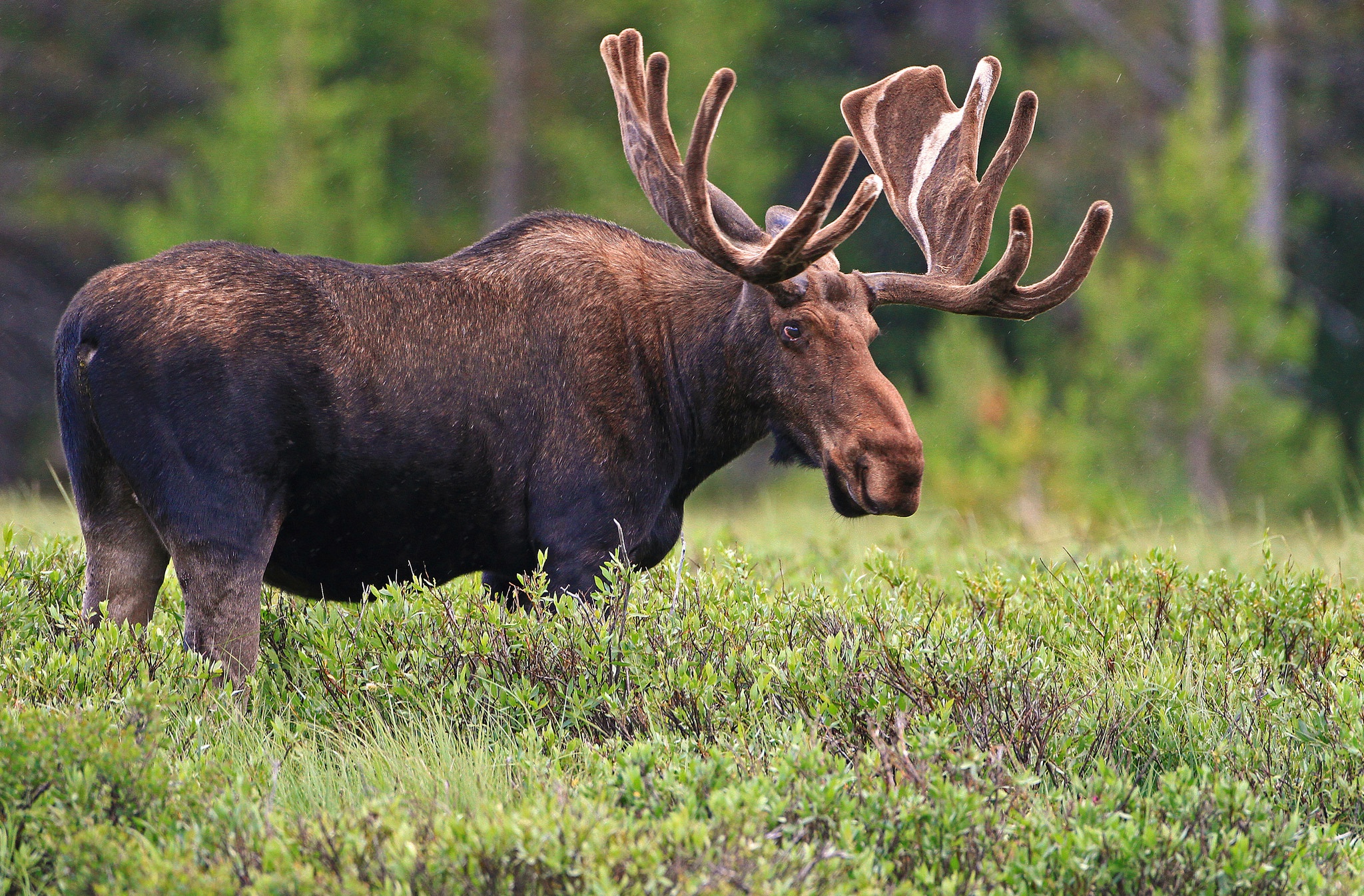 It is difficult to confuse elk with any other beast. He has several distinctive characteristic signs.

The appearance of the beamy animal is extremely nonstandard, and, it surely cannot be called good-looking.

The first thing that catches your eye is its disproportionate body. The legs are too long, massive, the neck and torso are short, there is a hump on its back, its shoulders are high. In order to drink enough in shallow waters, the animal even has to bend its front legs.

On top of that, there is a big hawk-nosed head with a fleshy hairy upper lip, due to which the elk was given a nickname “mushmouth”. The impressive nostrils are looking downwards, the ears are long, pointed, and the ear lobes are almost absent. The eyes are small, deep-set, and there is a leathery process (“a pendant”) under the throat with its size reaching 30 cm.

The fur of the Baikal elk is tough, brown, with a black stripe that can frequently be seen on its back. Against the background of the dark “fur coat”, its legs stand out as having a lighter shade.

But, of course, the most remarkable detail of the elk’s appearance can be called antlers, their span reaching 1.8 meters, and weight - up to 30 kg. The male elk has the most impressive horny processes among all mammals. The antler itself has a rather short stem and “shovel” surrounded by processes, their number depending on the age of the animal. It is believed that the most spectacular and impressive antlers belong to 15-year-old male elks. This is the brightest distinguishing feature of a male from a female, however, from the fall of the leaves until January this element of sexual identity disappears, and the elk begin to “grow” it again in spring.

The difference between males and females is perfectly visible in their size as well. Baikal elks differ from all other elks in size, where a male elk living by the lake weigh an average of 400 kg. However, many animals can weigh more than half a ton.

The height of the animal at the lower border of the shoulder is equal to 2.5 meters, and the minimum length of the body is 3 meters.

The elk’s way of life is associated with the seasons and is determined by temperature conditions. The nocturnal lifestyle is characteristic of summer hot days when, alongside with the heat, the forest gnats also really annoy elks. Under such circumstances, the elk try to either hide in the thick of the forest, or stay on breezy meadows, or it can even hide the water leaving the only neck above the water. The elk goes to look for food in the cool of the darkness. In winter, the opposite is true. At nights the animal is lying, burrowing into the snow and hiding from frost: this reduces heat loss. And during the day the elk is trying to find food.

There should necessarily be a water reservoir near the elk’s home: its importance is associated with the presence of vegetable food and the possibility to hide from the heat and insects.

We cannot literally call the elk a pack animal. Most often, they prefer to live single, or in groups of 3-4 individuals.

Despite their weight and size, elks are able to move fairly quickly (up to 55 km/h). They are also known to be perfect swimmers who are able to stay underwater for about a minute while getting their food.

Despite their excellent senses of hearing and smell, elks have very poor sight. Experts say that an elk simply cannot notice a person standing motionless at a distance of 20 meters from the animal.

But if an elk meets a human, the animal is unlikely to attack. Elk is a peace-loving creature. It will demonstrate open hostility only in the presence of a strong external stimulus or the need to protect its offspring. Moreover, the elk will fight not with its antlers, but with its front limbs. However, as a rule, if there is such an opportunity, the elk will try to escape from danger.

The Elks Can Eat Fly Agaric…

Elk, of course, is not a giraffe, but, thanks to its size, it easily reaches the leaves at a great height, at the same time this height and short neck don’t allow the animal to graze. Therefore it is necessary to look for high herbaceous plants and young shoots of trees. In summer the animal’s diet is more diverse due to aquatic plants – the elk can get them from the water reservoir, and in the autumn the diet is supplemented with mushrooms and berries, for example, cowberries. The amount of food decreases in autumn, therefore the “beamy” animal is forced to switch to shoots and tree branches, gnaw the bark, and beginning from November, the branches become the only ingredient in the elk’s diet.

In summer, when there are a lot of various greens, the elk is able to eat up to 35 kg of food per day, and in winter it is hardly possible to find 12-15 kg. Therefore, in the spring the animal loses much weight, although it tries to lie down for the most part of the time. The elks like salt very much, often going after it to salt gardens or to special feeders arranged by employees of specially protected natural territories. 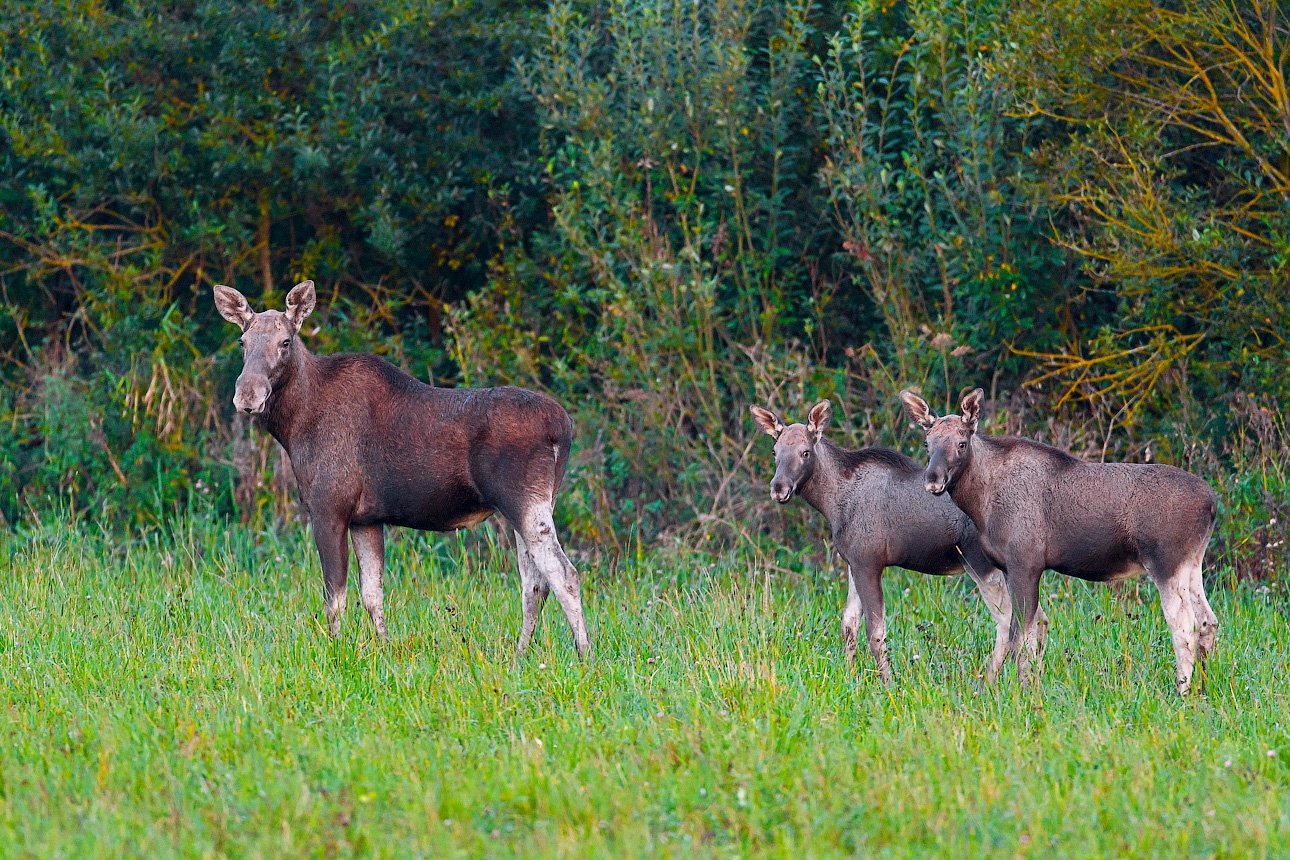 Despite all their peace-loving character, elks become incredibly aggressive in late summer-early autumn, during the estrum period. Their strange dull lingering bellow, interrupted by the fight for the female, can be heard from afar. The fights are incredibly cruel and often end with the death of one of the rivals. This battle is a fight for one particular “spouse,” since the elk is monogamous.

At the very end of spring, elk’s kids are born; one mom brings only 1-2 baby elks. Hunting experts noted an interesting pattern: young elk females most often have “girls”, and mature animals give birth to “boys”.

Although the newborn elk calf is very weak, already on its birthday it tries to stand on its feet, and after 3 days it walks confidently enough. Just like with the majority of other clubs, during the first months of life, the calf greatly depends on its mother. The calf follows her and sucks milk. Due to the high-fat content of milk, in autumn calves already gain from 120 to 200 kg, as compared with 10 kg at the time of birth. Calves also try to eat vegetable food, but so far they are limited to the greens they can get at their height because they still don’t know how to crawl on their knees in search of grass.

No doubt, the little calf is still unable not only to protect itself but even to escape from danger. And here the mother elk comes to the rescue: her rage can even scare a bear away.