© Photo credit: www.depositphotos.com
One more remarkable date was added to the calendar of holidays precisely 20 years ago, in 1998. March 14 has since been celebrated as the International Day of Rivers. However, it is the holiday’s name in Russia, and among of environmental activists this date is known under a slightly different name - the International Day of Action Against Dams (and for Rivers).
Anastasiya Yarovaya
Publicist, publisher, lives in Irkutsk (Baikal). Author of thirteen books and owner of a small publishing house.

The holiday in honor of rivers was invented by the US environmentalists from the environmental organization titled “International Rivers Network”. They also proposed to celebrate the “Day of Action Against Dams”, considering the dams to be serious technogenic objects violating natural ecological balance. During all these years the holiday has been held under the official motto “For rivers, water and life!”. That is why it undoubtedly is one more date in the calendar directly connected with Lake Baikal, because the number of rivers filling the lake is large, and according to some information, even huge.

In late XIX century, a well-known explorer of Siberia, geographer Ivan Chersky counted all the rivers and streams that were flowing into Baikal then. Their number made up 336. Modern researchers give different figures - from 544 to 1000 and even more, calculating not only constant water streams, but also small valley rivers with the water running down from the mountains, depending on the season. It is also believed that over the past 200 years, about 150 water streams running to Lake Baikal have disappeared due to climate change, deforestation, other anthropogenic and natural factors. It is interesting that there are no certain data on the number of rivers flowing into the most important fresh lake of the planet even nowadays. Therefore, it is usually accepted to refer to the number counted by Chersky, as the most realistic one. 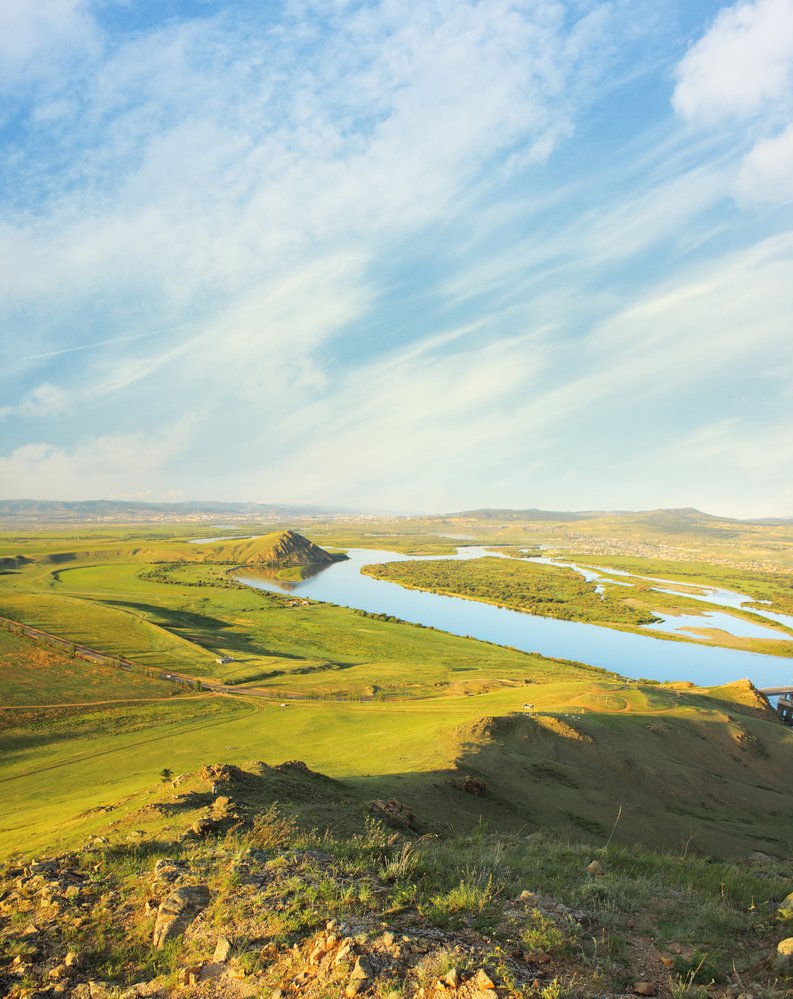 On the contrary, the number of rivers flowing from Baikal is known precisely. This river is one and only, Angara; several large Siberian cities are built on the river’s banks, as well as a cascade of HPPs: these are power plants in Irkutsk, Bratsk, Ust-Ilimsk, and Boguchany.

60 cubic kilometers of water per year flow from Baikal through Angara. This makes up approximately 25 liters per each inhabitant of the planet Earth a day. And due to the fact that about the same amount of water flows into Baikal through about 300 or more rivers and streams during one year, the scientists calculated that the water in Baikal is completely renovated over 330 years.

The Angara River flowing through the territory of Irkutsk Oblast and Krasnoyarsk Territory has a counterpart in Buryatia. This is one of the major rivers flowing into the lake, Verkhnyaya Angara. This river is 438 km long and flows in the north of Buryatia, beginning in the spurs of the Severo-Muisky ridge and Delyun-Uransky ridge at a height of about 2 thousand meters above sea level. At the beginning Verkhnyaya Angara is a mountain river with a lot of rapids, but as it descends from the mountains, it mostly flows through the Verkhnyaya Angara basin, and there are several settlements on its banks, including Novy Uoyan that received the status of township in 2012.

the Verkhnyaya Kichera River situated not far from Verkhnyaya Angara also flows into Baikal. Together with Verkhnyaya Angara, they form an extensive delta and the Angarsky Sor bay. “Sor” is a local name for a shallow-water Baikal bay, separated from the lake by sandy spit islands. Angarsky Sor is separated from Baikal by the narrow sandy island of Yarki that stretches for 11 kilometers and other islands (Millionaya Ton’ and others) with a total length of 17 km.

Another large river in the north of the lake is Tyia. It flows into Lake Baikal to the south of Severobaikalsk. It flows from the north to the south through the mountainous terrain. For this reason water tourism, mainly in the form of kayaking, is actively developing on Tyia.

Verkhnyaya Angara is the second most affluent river flowing into Baikal. And the first one also flows on the Buryat side of the lake, and this is the famous Selenga.

Selenga begins in Mongolia. It carries about half of all water that enters Lake Baikal during a year - about 29 cubic kilometers. Falling into the lake, this river forms a vast delta with the area of 680 square kilometers. It is believed that thanks to this delta, Selenga has received its name, because the Buryat word “sel” is translated as “overflowing”. However, there is also an Evenki version. According to it, “sele” means “iron”. So Selenga is an “iron river”.

The capital of Buryatia - the city of Ulan-Ude – stands on the bank of Selenga. They wanted to build two HPPs there in early 1930s. However, in 1934 the hydropower potential of the river was investigated by the experts of the Hydroelectric Project Institute. As a result, the construction was not recognized feasible, due to the lack of large electricity consumers on the river banks. In recent years Selenga’s hydropower properties have been discussed again: in 2013   Mongolia began to consider the plans for the construction of the “Shuren” hydroelectric power plant.

The third largest river flowing into Lake Baikal is Barguzin. The Barguzin river valley is one of the traditional places where the tribes of Buryats and Barguts settled. It is believed that it was the tribe of Barguts - the Mongol-speaking people mainly living in Inner Mongolia (one of the regions of China) - named the river this way. The river is mentioned in historical records as “Bargudzhin-Tokum”.

Barguzin begins at the junction of the Ikatsky and the Yuzho-Muisky ridges. As it flows along the Amut Basin, it forms Balan-Tamur Lake. The river flows into Baikal in the area of Barguzinsky Bay, one and a half kilometers from the settlement of Ust-Barguzin with a rich history. The settlement was founded in 1648. The decembrist M.K. Küchelbecker lived and died here in exile, the member of the Petrashevsky Circle N.P. Grigoryev also lived there. In 1873 M.A. Novomeisky was born here; he became one of the founders of the Israeli chemical industry on the coast of the Dead Sea. There is also every good reason to believe that the great Hungarian poet Sandor Petofi was buried in Ust-Barguzin.

One more river flowing into Baikal from the Buryat side is Turka. Its length is 272 kilometers, it flows through a strongly cross-country terrain from the east to the west and flows into the middle part of Lake Baikal near the village of Turka;  the famous Barguzinsky highway passes through this village. This village is one of the oldest in Transbaikalia: it was founded in early XIX century.

The Snezhnaya River flows into Lake Baikal at the border of Buryatia and Irkutsk Oblast:  the river is one of the most affluent water streams flowing from the northern Khamar-Daban ridge. The173-km-long river is very popular among water tourists. In case of an average water level, the complexity of obstacles on the river equals to the category IV. However, next to the Kharmyn-Dulyu waterfall (“Squirrel’s Flight” waterfall), the complexity category increases to VI +, and only a few sportspeople managed to pass the waterfall on kayaks. Whereas the rapids of Zhaba (“Toad”) and Snezhinka (“Snowflake”) have a complexity of the category VI.

The Rivers of the Western Coast

The two large rivers of the western coast - Goloustnaya and Buguldeika - carry their waters to Lake Baikal.

Goloustnaya flows through the territory of Irkutsk Oblast. The river begins from the northern slopes of the Primorsky ridge, then makes a loop, flows through the ridge, then divides into several arns and flows into the lake. The river’s width reaches 55 meters and its depth is equal to two meters In the vicinity of the village of Bolshoe Goloustnoye standing at the confluence of the river and Lake Baikal. There is a small island on the river not far from the village: unique relic poplars grow on it. You can wade through the river to reach the island. Some legends say that old shamans conducted their rites on the island.

The second largest river of the western coast is Buguldeika. Its length is 78 kilometers. The village of Buguldeika founded in XVII century as a Buryat ulus is situated in the mouth of this river. Tourism is actively developing in Buguldeika nowadays: there are tourist centers and guest houses there. The village is quite large: its population amounts to about 1,000 people.

The rest of the rivers and streams are much smaller than these major suppliers of water to the enormous lake. Thus, the famous river having the same name as the strongest Baikal wind, Sarma, flows into the Maloe More Strait and is only 66 km long and not especially affluent. Nevertheless, all 336 big rivers, small rivers and streams are marked on maps and bear the official names of Baikal tributaries.

A Relatively Unknown Legend about Angara

There is an interesting Buryat legend about the way the rivers began to fill Baikal. It is less famous than the classical legend about the flight of Angara to Yenisei, nevertheless, it presents yet another “version” of the reason why one and only river flows out of the lake.

Once upon a time the earth was all covered with solid ice. People wandered around small islands and managed to get food somehow. Then the ice began to melt, and the small islands turned into a large land.

Baikal revived, regained its power. It was the time when the lake began to show his uneasy character: Baikal could crush the coastal rocks in anger. The rivers did not like it and tried to persuade the ancient lake: “Do not be angry, Baikal! Do not hurt anyone.”  But the small rivers could not command such a mighty giant.

Then the rivers collected all their mountains waters and struck Lake Baikal with all their might. No matter how hard it tried to hold the water within its coast, no matter how he exerted himself  - he could not stand the pressure of small rivers. The weight of the water became so great that the bottom of the lake began to descend, and the water broke through the coast, broke the rocks and broke free.

Baikal got mad and threw a large stone into the pit. But the pit only absorbed the stone, and the water continued to flow out of the lake. Then Baikal threw the second stone. But it was also absorbed by the pit. Only the top of that stone can still be seen above the water...