Musk deer — one of the most unusual small cloven-footed animals living in Baikal.

I remember the riddle that I read to my son very well:

This simple poem describes the appearance of one of the most unusual small cloven-footed animals: musk deer, living, in particular, on the coast of Lake Baikal, on the slopes of the hills and ridges surrounding the lake. It is especially interesting to get to know how the animal lives under the conditions of sever taiga winters. 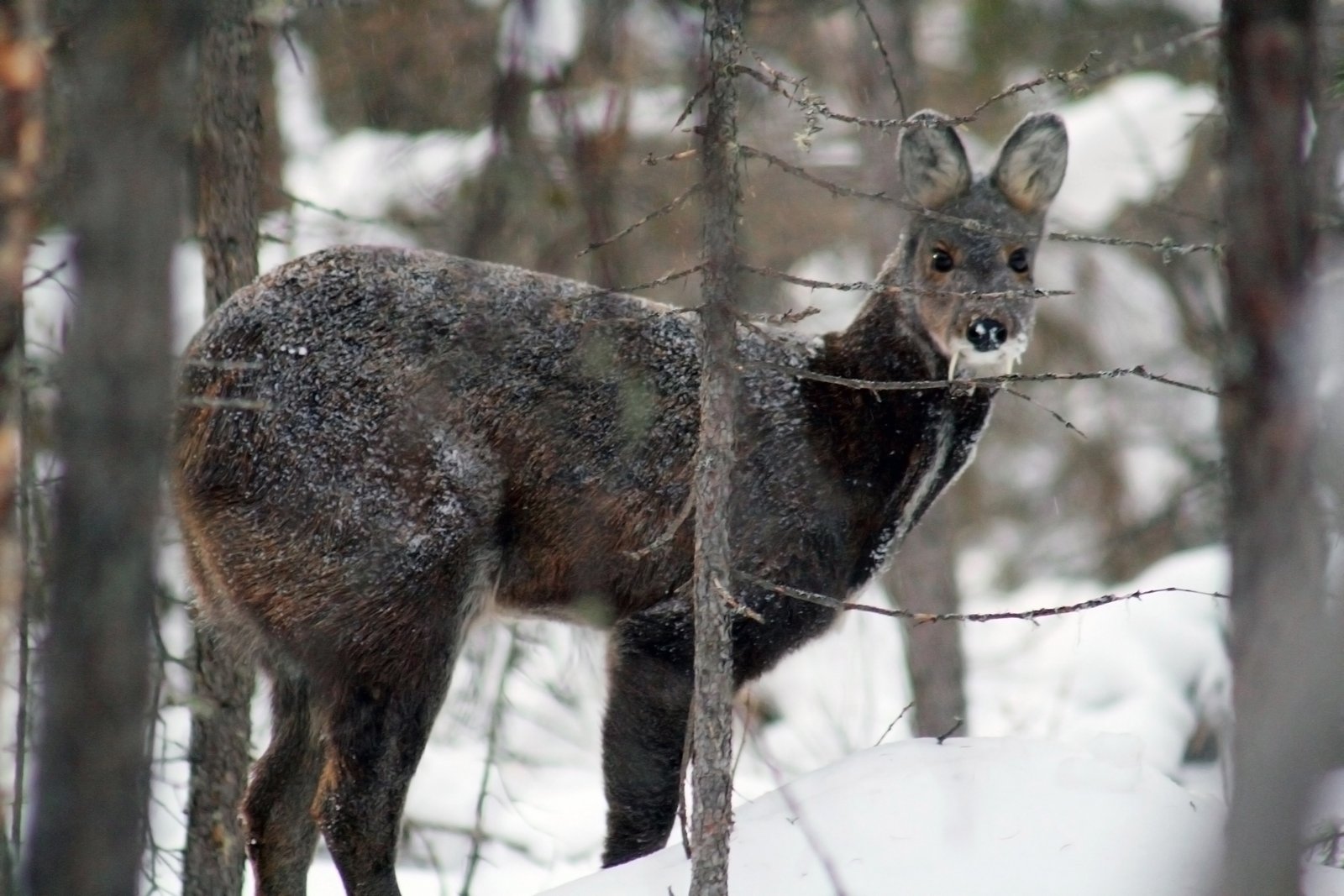 Musk deer resembles a miniature deer, sometimes it is described as a deer with a weird fragrance, and also a musk sheep, or a musk deer. Male deer have a special abdominal gland, with the size of a chicken egg, producing musk (gelatinous, thick aromatic substance with a very strong smell). This very fact made the hunt, or rather, the extermination of musk deer extremely profitable. After all, musk is successfully used in perfumes and in oriental medicine.

The first description of this animal was made by the famous traveler Marco Polo as early as in the 13th century: “The animal has a size of a gazelle <...> its coat is as thick as that of a deer, its legs are like those of a gazelle, there are no horns”.

If we want to depict a more detailed portrait, then we will get the following picture: body length - about 1 meter, withers height - up to 70 cm, weight - about 11 - 18 kg, short tail with a small pit under it. It is hard to say that shape of a musk deer is full of grace. The general effect is spoilt by the animal’s hind legs that are almost one and a half times longer than the fore legs. Therefore, the animal looks like it is hunched over. Hence, the statement that it looks like a kangaroo.

However, most often, of course, the appearance of musk deer is compared with a deer, although there is one fundamental difference - the absence of horns. Nevertheless, males have developed upper horns, protruding from under the lips. They grow during their entire life and stick out of their mouths like tusks, protruding downwards to 5–8 cm. These white, very sharp teeth with a cutting rear edge play the role of tournament weapons in the fight for females during the winter mating season. These are real fights, one of the combatants can knock the other to the ground, and then plunge its fangs into the rival’s body.

The hair of musk deer is very long, thick, but brittle: it helps the animal to survive the harsh Baikal cold. The fur of musk deer has become a fine camouflage coat, thanks to the Mother Nature. Its color is characterized weakly contoured light brown spots scattered on the general dark brown background in an uneven way. Thanks to its color, the musk deer virtually “vanishes” in the forest against the background of growing and fallen trees, among the rocky cliffs and stones of the dark Siberian taiga. Two light stripes go along the neck of a male from its chin to the fore legs, as if dividing the body into two parts. This enables musk deer to remain unnoticed upon certain kind of play of light and shadow.

A musk deer is constantly on alert, ready to instantly speed off, having an incredible velocity at short distances, but this animal cannot run for a long time. Therefore, nature took care of its hooves. The hooves are thin, sharp, can move apart far enough, and the soft horn rim on the cover of the hoof protects the musk deer against slipping on the stones and helps them to comfortably overcome the ice fields.

A fairy tale composed by one of the smallest indigenous peoples of Eastern Siberia – Tofalars –tells about the appearance of musk deer very well.

A big moose elk and a small musk deer met in the taiga. The big elk says:

- Why are you so small and big-eared?  You have a ridiculous appearance and are an eyesore among our mighty deer race!

- You are so big, but if you count, then you have less hairs than I do…

The big elk was sure of the fact that there was no animal larger than him in the entire taiga, so he immediately decided to check who was right. Both started to count, to check who had a larger number hair in their coats. They counted for a long time, and it turned out that the musk deer had five hairs more than the elk. The latter became angry, raised his fore leg to kick a musk deer. The small musk deer managed to jump away, but the elk’s hoof only hurt her from behind –so a small pit remained there.

Musk deer are very secretive, swift, and cautious. It has not been possible to observe them in the wild for quite a long time, and the shamans of the peoples of Siberia used the fangs of musk deer as amulets. Such facts became the basis for the emergence of a variety of fictitious tales, for example, telling that the musk deer is a predator, drinking the blood of other animals. Of course, this has nothing to do with reality, because scientists have long proved that the musk deer is a herbivore.

- The mating period of musk deer falls to the severe frosty time (the end of November - December), it is the only mating period during this time among all deer;

- When a musk deer hides from prosecution, it runs in loops and doubles on the snow, just like a hare;

- Musk deer are a skilled jumpers, almost unparalleled among the taiga animals. Its strong hind legs allow the musk deer to perform great acrobatic jumps, both in height and in length. Preparing to jump, the musk deer puts all its legs at one point, then it pushes off with all its legs at the same time.

Being in a jump, the animal can turn to 90 degrees without slowing down and change the direction of movement or stop on the run instantly and silently. In addition to jumping from the thrust to the thrust covered with ice, a musk deer is able to pass narrow overhanging thrusts;

- the favorite food of musk deer is lichen, which accounts for up to 95 percent of its winter diet. A musk deer collecting food can climb a tree trunk that is inclined and slippery due to the snow layer or jump from the branch to the branch up to the height of 3 to 4 meters;

- A musk deer eats up to 200 or more lichen bushes per day, pinching up to 1 gram from it at a time. This is one of its main habits, allowing the musk deer to survive among deep snow. Leaving food “in reserve”, musk deer gradually eats it, not all at once. But once there is a trail in the snow, there is a “road”, this enables musk deer to avoid spending extra energy on overcoming the snow.