War and Peace at Baikal: the Fate of the Two Ice Breakers

The fate of the fleet of Lake Baikal is closely associated with the civil war that overwhelmed Russia after the October revolution. We’ll tell about the way the Baikal “Titanic” built by the British was destroyed, as well as about the fate of its counterpart, the “Angara” ice breaker.

The construction of the Trans-Siberian railway began at the end of XIX century. In order to complete the work sooner, it was decided to organize the construction on several sites at once. The Siberian Railway was supposed to be closed in the region of Lake Baikal, however, difficult topographical and geological conditions that coincided here did not allow to do this as soon as possible. Due to the difficulties in the construction, the late commissioning of the Circum-Baikal section would delay the opening of the through traffic one the entire railway. Therefore it had been decided to organize a railway ferry across Lake Baikal until the section around the Lake was complete. 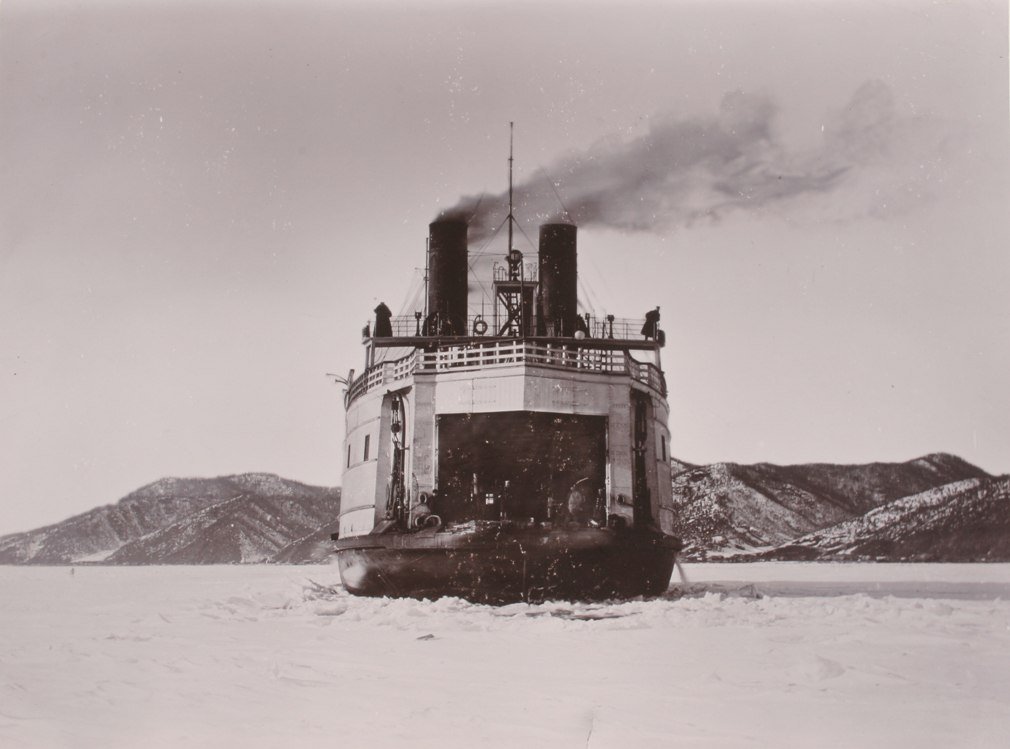 In 1895 a deal was closed with the British company “Sir W G Armstrong Whitworth & Co Ltd” which had already manufactured an ice breaker for crossing of the Volga River by that time. In the following year the ship was constructed and was undergoing trials along the coast of England: to the British Channel and back. Then the ship was dismantled and sent in Revel (Tallinn) and St. Petersburg by separate parts. Overland adventures of the parts of the future ferry ice breaker began in these cities. The parts reached the village of Listvennichny (Listvyanka) on the coast of Lake Baikal by trains, ships and even animal transport, at that place they were assembled already in the year 1899. Not all parts were made on the British Isles – the future ice breaker’s wooden parts were made from local valuable species of trees already during the final assembly.

The Ministry of Transportation proposed to name the ship in honor of Nikolai II, however, the Tsar himself did not approve the idea, and the icebreaker was named “Baikal”. Looking ahead, we will inform you that, despite this refusal, the deaths of the Tsar and the ship were divided by precisely a month - in the year 1918.

The “Baikal” ferry ice breaker was the largest vessel on the Lake. Its body was made of the best Siemens-Martin steel. The bottom was double like that of heavy warships, a wide belt of steel sheets 25 mm thick went along the waterline on the hull. The length of the “Baikal” made up 54.9 m, width - 9.6 m, displacement tonnage - 4200 t, there ship had cabins designed for 200 passengers. The three railway tracks of the ice breaker could provide place to 25 two-axle wagons with goods and a locomotive, its cargo holds could keep 850 tons of goods.

The vessel was serviced by a team of 200 people. The ship had a richly decorated Tsar’s salon, even with gold-plate dinnerware sets.

In the year 1900 the second ice breaker – “Angara” – capable of carrying 160 people and about 150 tons of cargo came to the rescue of “Baikal” in the same way. It was intended mainly for the transportation of passengers across the Lake and was used for auxiliary functions in joint circulation with the “Baikal” ice breaker.

Before the commissioning of the Circum-Baikal Railway in 1905 year “Angara” together with “Baikal” committed two passages between the landing piers of Baikal and Mysovaya every day. Over the time the pier of ice breakers was transferred to Tankhoi. 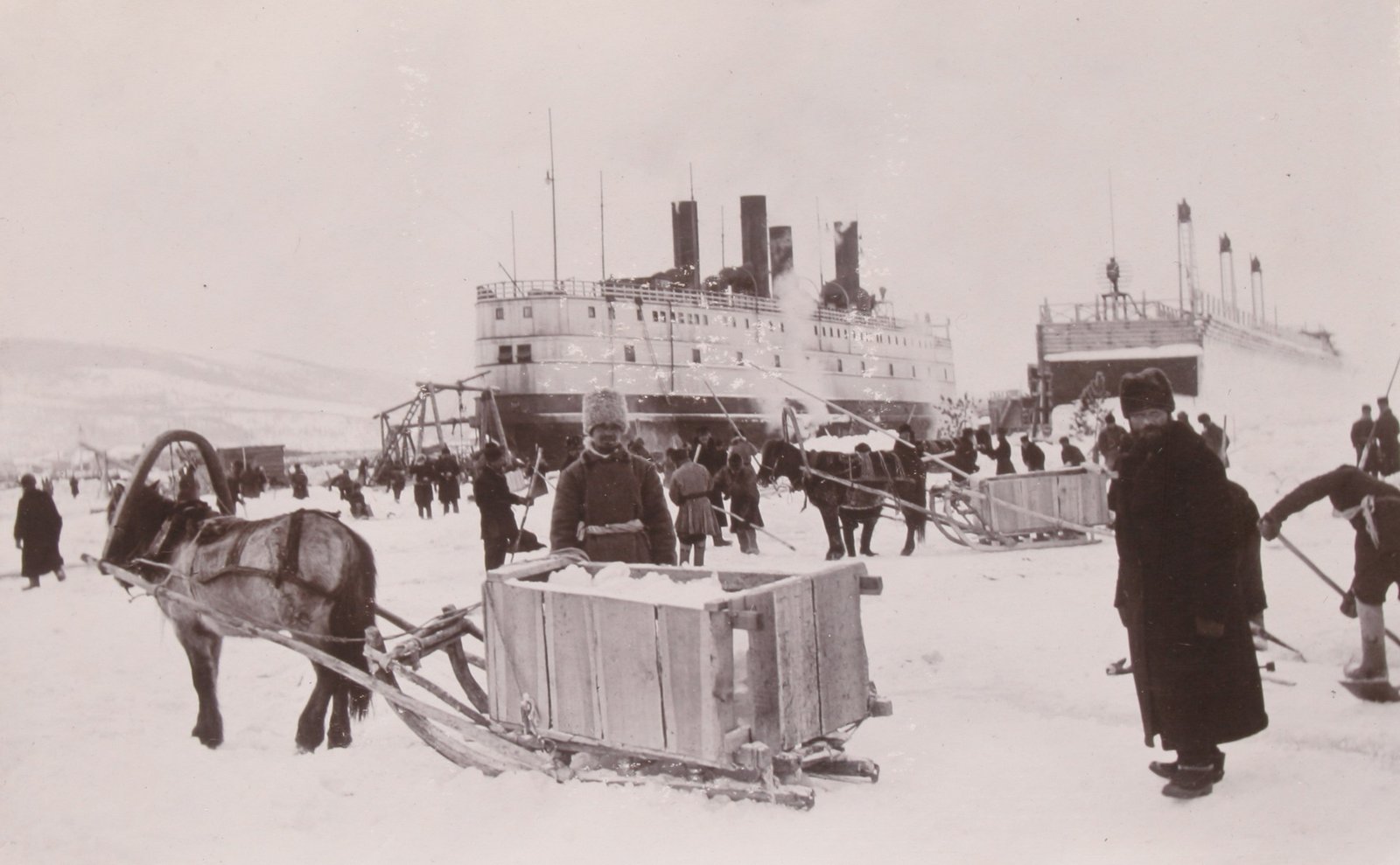 After the October Revolution the ice breakers were nationalized. Pretty soon, with the beginning of the civil war and the approaching military units of the rebellious Czechoslovak Corps to Irkutsk, people had to suspend peaceful works. War front was rapidly approaching Irkutsk. It was decided to create a warship flotilla on Baikal. Its flagship became “Angara” which got armed with two 6-inch cannons and 4 machine guns.

“Angara” with a detachment of Red Guards of Listvennichny on board went cruising in the southern part of the Lake. Now a combat vessel, it applied fire to railway tunnels of the Circum-Baikal Railway and monitored all movements along the Lake and on the Lake itself. In addition, “Angara” made landings that helped to get hold of the strategically important points.

The “Titanic” of the Lake, the “Baikal” ice breaker became a real mobile headquarters and a warehouse. It had enough place for people, guns, armor, coal and many things more. The ship was poorly armed - it had just one old mortar.

White Czechs managed to create their own fleet. Its main aimpoint was the floating headquarters of the Red Guard. As we have already mentioned, “Baikal” was not able to avoid death. Taking advantage of the absence of “Angara”, the fleet of White Czechs attacked the Mysovaya pier where “Baikal” stood. The operation involved the following ships: “Feodosiy”, “Buryat” and “Sibiryak”. The first vessel with two barges under the board carried artillery and machine guns. The attack was noticed too late, and “Baikal” didn’t even have time to turn around and accept the fight. One of the first missiles hit the ice breaker in the stern and immobilized the giant. When the topside was hit, “Baikal” was set on fire. The wooden topside, the holds filled with charcoal, grease and armor  - everything became the prey of the flames. The frame of this ship stayed at the bottom at the pier until its metal became required for the needs of the war front during the World War II.

After the end of military actions “Angara” has long served as a passenger vessel, then as a fishing vessel. It operated until 1962, having several crashes, getting stuck in the ice of the “Holy Sea” and even narrowly escaped sinking once. In 1963 the ship was dismissed, its fate has for a long time been in the hands of the Ministry of Defense or of the Irkutsk authorities. Finally, in 1991, the donations of the inhabitants of the city helped to turn the oldest ship of its class into a Museum which accepts visitors now. That’s the continuation of the story of the last ice breaker of Lake Baikal.