Water Dragon: A Monster from the Bottom of Baikal

One of the most horrible legends passed from mouth to mouth by the inhabitants of is probably the story about a terrible bloodthirsty monster living at the lake bottom. The Buryats call the monster “Lusud Khan” - “The Master Water Dragon” and are still afraid of him.

There is no single description of the monster, as well as of its certain habitat. At least three options are being discussed.

According to the first option, this horrendous creature looks like a giant sturgeon with an unusually evil muzzle and a huge armored fin along its entire giant back.

Secondly, they talk about an enormous stone located on the bank of Yenisei, where the only daughter of Baikal, Angara, once fled. The image on a boulder is a painting of a huge lizard with a forked tongue, big claws and plate armor along its back. People never met such a water giant in this region, so, it is possible that the monster could have been noticed here during its “journey” from Baikal along the Angara River.

Some enthusiasts who tried to solve this mystery presume that the mysterious inhabitant of the Baikal depths chose Mukhorsky Bay of Maloye More Strait as the place of its residence. The monster from Mukhorsky Bay belongs to the relict, almost unexplored species- a species of predatory amphibian reptiles, resembling both the crocodile and the ancient ichthyosaur.

Sacrifices to the Blood Deity 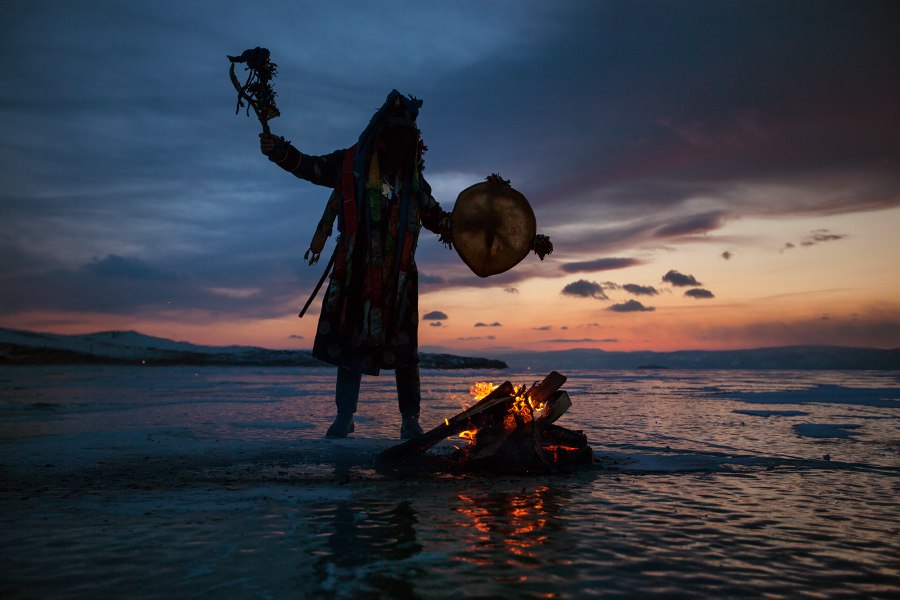 The faith of the local population in some kind of ancient underwater creature was confirmed by rituals that were performed back in the first quarter of the 20th century.

For instance, Mongolian warriors that were moving from south to north-west in the 12th-14th centuries killed the inhabitants of nearby settlements and threw their bodies to Baikal, thus offering bloody sacrifices to the Baikal monster. In exchange for the sacrifices, they hoped to achieve success in military affairs.

It is known that in the 18th century, prior to complete colonization of Baikal coast by the Russians, Evenki, Nenets, Yakut princes sent people bringing rich gifts - cattle, furs, precious stones - to the coast of Baikal. These precious things were loaded on special boats, then the latter brought them to the lake.

At the beginning of the 20th century, people started talking about the emergence of some strangle, terrible creature in the area of the Maloe More Strait. The case of one merchant who brought cattle to the Olkhon Island across the Mukhorsky Bay gained wide popularity. Somehow, due to the instability of the boat, one of the horses fell down into the water. All attempts to get her out of the water failed, moreover, literally a few minutes after the incident, people noticed blood-stained parts of the animal’s body and its head floating on the surface.

Later they started talking about disappearing people. These rumors became especially active after the end of the Second World War, when Japanese prisoners were brought to work to the village of Chernorud. Of course, the information about them was classified, but it was still impossible to hide the facts of the bodies found on the beach - these were torn apart literally in half.

Local residents saw nothing supernatural in these accidents. They have always considered the territory of the Mukhorsky Bay to be sacred land. No one dared to speak about that land in vain; it was prohibited to look at the bay during the daytime. An annual ceremony of offering sacrifices has been held there since ancient times: meat and fish were put on the rafts on the darkest and moonless night, and then the rafts were released into the water, as a sign of reverence to the mysterious and formidable deity. Besides, regardless of the wonderful natural climatic conditions, no one had built houses on the coast of the Mukhorsky Bay for a long time. Therefore, it proved to be possible to preserve nature and fauna of the place in its original form.

Today a story about a giant monster, resembling a knotty, lumpy log living in the Mukhor Bay is being told among the indigenous inhabitants of the Maloe More Strait. According to the story, the monster swims on the water surface only at night, and issues specific hoarse sounds, ending with a kind of “gurgling” – these sounds are the evidence of the existence of the creature. And as soon as this “music” is heard by people, there is no doubt that the cattle coming to the lake to drink water will definitely disappear.

There are also stories about fishermen who never came back. Fellow villagers were able only to find their bodies torn apart. Moreover, even the captains of the vessels claim that the size of the monster is very large. They prove it by telling about the case when the ship’s crew heard hissing and gurgling sounds. The Baikal water was absolutely calm, but the ship suddenly began to strongly sway back and forth. There was an impression that someone swam under the bottom of the vessel and scratched its back on it.

Even today, fishermen state that they have met some unusual creatures - huge, black creatures that can be clearly visible through the purest clear water of Baikal.

There are researchers who do not deny the possibility of this fact. The explanation is associated with the unusual water characteristics in the Mukhorsky Bay. Thermal hot springs are located on the bottom of the bay, warming the water in winter and in summer, heating it up to the temperature of 23 degrees Celsius. Favorable conditions make it possible for large predatory fish to live and breed in the bay – this fish feeds the monster living in the Mukhorsky Bay, and in winter it feeds on ringed seals that also come here to feed and cannot fight the monster in any way.

Moreover, in the late 1980s a special survey of the lake bottom involving echolocation equipment was carried out by enthusiasts. The devices recorded a certain moving object with a length more than 30 meters, but the research was not continued, therefore, no documentary evidence confirming the presence of a monster in the waters of Baikal was obtained.