Taste Preferences of the Ancient Peoples of Lake Baikal

A dinner or a lunch for the ancient peoples of Lake Baikal was not just a meal, but an entire rite with its own rules and traditions. “Key to Baikal” will tell you how to cook Tungus-style meat and how the eating habits of the ancient people of the lake changed depending on the season.

The culinary culture of the indigenous inhabitants of the Baikal region has been determined by the severe conditions of Siberian life. It was well understood here that not only comfortable warm clothes, but also high-calorie, satisfying, tasty food could help to stay warm during a long cold winter. Therefore, one of the main food products of the Tunguses (Evenks) was meat.

Ethnographers noted that in the olden days, instead of the usual “Hello”, the Evenks used to greet each other saying: “What did you eat?”. The answer was connected with the name of a specific part of an animal carcass, not just a brief definition of “meat”.

One should not forget that the “acquaintance” with Russians introduced innovations to the Evenki menu, such as, for example, tea or bread. But the main concepts of food, its composition have preserved:

- several generations of people lived in a family together at the same time, so a large amount of food was cooked for all family members;

- a meal was eaten around the fire. A similar option is possible today, but it is already a rite;

- they ate 4 times a day, and, interestingly, after equal intervals of time. The last two meals were more significant in the number of dishes and calorie content. Such stability was interrupted during a hunt or when moving to a new place;

- before eating a meal, they drank tea or boiled water with some substitute for tea;

- the choice of food ingredients was connected with the seasons: in early spring, the prevailing meat of cloven-hoofed mammals was alternated with game; in late spring and early summer, fish appeared on the table; beginning from mid-summer, the meat and fish diet was replenished with wild berries; beginning from autumn, meat consumption increased again, besides, pine nuts diversified the diet. During the last two autumn months, the meat menu was enriched with upland game, meat of cloven-hoofed mammals and bears, sometimes supplemented with fish; dry stocks were used only in December - January;

- there was a ban on the consumption of meat of separate animals and birds: wolves, fur animals, dogs, swans, herons, storks, loons.

The Practice of Tungus Sarcophagy 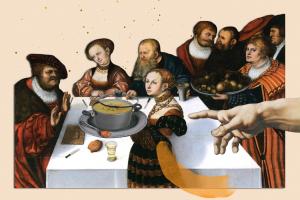 A Simple Recipe of a Makeshift Baikal Soup

The Evenki preferences for eating meat were diverse. They ate raw, dried, fried, and boiled meat.

The most gourmet and the most revered option is fresh dressed (raw) meat products: liver, kidneys, bone marrow, tendons from the brain bones... In this case decay process has not yet begun, and therefore the meat is both soft and tasty. The bone marrow was extracted by hitting the bone with a blunt edge of a knife, after which it split lengthwise, exposing the favorite delicacy that was still warm: it was given to children or guests, the small pieces were put on top of the bulk of boiled meat. The remaining adults were pleased to eat tendons – nasal ones or from the stifle joint.

They also liked frozen fish or meat cut into thin slices. This included a variety of raw cold-caught food with its main value - preserved juices and vitamins.

The use of animal fat was also widespread:  they ate the internal fat of wild ungulates and domestic deer. They ate it dry in summer and frozen in winter.

The favorite delicacy was deer brain skillfully roasted in the form of a basket, on a special broiling rack.

Only the lungs and eyes were not eaten by Tunguses. Eyes with nerves were skillfully removed from the eye sockets and used as good luck charms: they were put inside the “chum” hut and carefully transported from one place to another.

The most preferred, and, accordingly, the most widespread way of cooking meat was boiling. Here you need to pay attention to several details. First, they boiled meat without seasoning, with a minimum amount of salt, so as not to make thirst stronger. Secondly, the boiling of meat was never completed, because in this case they managed to keep both juice and aroma. In addition, such meat is digested in the stomach gradually, supplying the body with energy during a long period of time. They ate boiled meat from cups with broth poured therein.

There is a method of long-term storage of cooked meat. It is cut into small slices and dried on a stone stove (a hot stone from a bonfire). In winter, meat flour can be made of such meat with a pounder; then it is roasted in animal fat.

Meat products were also roasted on a pole, without completing the process and virtually without salt. Depending on the type of meat, the poles were placed at different distances from the fire.

The meat is roasted on a pole over a fire, finely chopped, and then dried on a wire rack. The pieces are smothered in crushed blueberries and dried again. The meat should not be salted.

The meat was dried in the same way - on a fire. For this purpose, raw meat was cut into narrow strips, slightly salted and laid out on the crossbars mounted above the fire. Such meat was extremely necessary in case of interruptions with getting hunting trophies (in the second half of winter or in early summer). There are interesting ways to cook it. The meat was previously “massaged” with the head of axe, softened, soaked in water and boiled. In the end, they could just eat meat, or grind it and add it to the porridge.

It was very useful to keep pieces of such meat in your pocket in case of long travels. Eating them allowed to easily satisfy hunger.

Another actively used way to cook meat was to dry it in the sun.