We continue to introduce the most unusual exhibits of the Irkutsk Regional Museum to you. This time, we will speak about the Buryat arrow storage facility which is more than 100 years old and used to be an inseparable attribute of...a bride.

The coast of the Great Lake has been inhabited by Buryats since ancient times: they gradually absorbed the traditions of Asia and Europe, supplementing them with their own unique values. A really exclusive repository of these national ancientries is the Historical Department of the Irkutsk Regional Museum of Local History. An exhibit found and included into the Museum’s collection in 1934 dates back approximately to the end of the 19th – beginning of the 20th century: it was a Buryat arrow storage facility.

A Quiver of Tough Arrows... 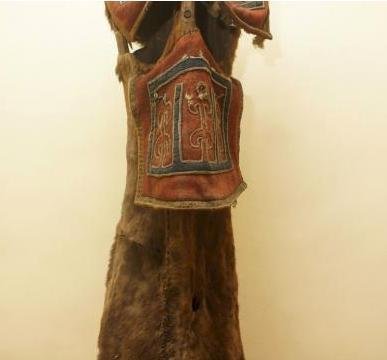 The Buryats used many kinds of different weapons. One of their essential attributes was originally a wooden bow used for hunting. Over time, the technology of bow manufacturing improved, and the need to protect their lands turned the bow into a powerful military weapon. The arrows may be put into special cases, besides, arrows and quivers could play a different role in the life of the Buryats and look in different ways, depending on the situation.

Under field conditions (while hunting or in war), the arrows were placed in the usual quiver of general Asian type on a wooden basis – it was called “haadag”. As a rule, it was made of birch bark, and then framed with leather or durable fabric of bright color; the outer part was heartily decorates with beads, corals, prints, and metal plates.

A quiver had several sections, the boundaries of each section was marked by thick strap covered with red cloth. Each of these sections contained up to twenty arrows of different types and purposes, placed with their tips down and tails up. Thus the arrows remained stabilized, and the archery could be done at a greater speed, which ensured successful pursuit of prey and victory over the enemy. The Buryats placed quivers on their right hip: for this purpose a shoulder-belt was thrown over the left shoulder. Thus it was more convenient to take an arrow from the quiver with the right hand and turn its sharp end forward.

However, alongside with this field quiver, Buryats used special stationary arrow storage facilities – “hahangs” – they were inherent components of interior in each yurt. 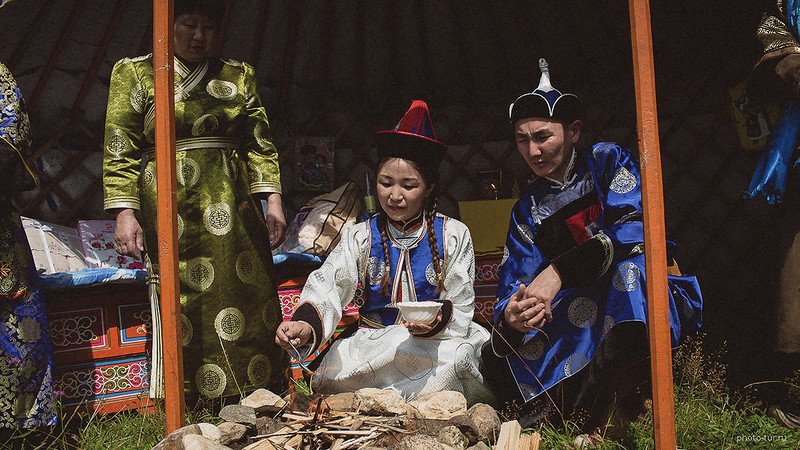 All rituals of the Buryats are highly interesting, but marital rites that are significant to the majority of people  are especially exciting. Since ancient times, the worldview of the Buryats has perceived the urge to marry as the awareness of the need to bring new people to the world, the understanding of the impossibility to stop propagation: their incredible respect for the elders and spirits of departed ancestors said that the fire in the hearth had to be preserved.

There was a custom to give a Buryat bride bows and arrows in the beginning of the 19th century. This is a reflection of the traditions of the ancient battue where the girls also participated. An attribute of the wedding ritual and future family life was considered a special arrow storage facility.

An arrow storage facility was a triangular case with a height of more than a meter, covered with calf skin or colt skin, with a carcass of wooden bars. Embroidery, iron, silver-faced plates, small shells were placed on the front side, and a row of belt brushes were hanging below the middle of the storage facility. 9 narrow long rawhide belts hanging down to the floor were attached on both sides. The patterns for decoration were cut of fabric (the fabric was usually black) and sewn with a thin white cord weaved of white sheep wool and white hair.

The Keeper of Family Happiness

The dowry of a bride included various sets of traditional things in different periods. For example, a hahanag was part of the bride’s dowry, and later it became an indispensable relic of the house, its shrine and protecting amulet. The arrows symbolized the life force of future children of the young couple: the more beautiful and full of arrows was the hahang, the more children could be born, the higher their wealth would be.

As the bride came to the groom’s house, a hahang was brought into the yurt and placed at the head of the future marriage bed. The popular Buryat type of dwelling (yurt) is not just a place of residence, but also an expression of the full-fledged Buryat view of the image of the Universe. Nothing was put there accidentally, on the contrary, the interior was organized according to the vertical and horizontal structure of the universe. Therefore, the hahang stood near the bed during the entire marriage, as a ritual object, symbolizing the wish to have many children.

According to marriage customs, the leader of the wedding procession on the bride’s side was the first to enter the groom's yurt, bringing in an arrow storage facility with arrows. At the same time, the relatives of the groom asked the question: “What did you bring?” They were answered: “We brought a full arrow storage facility, a full container of souls”.

In the later version of the wedding ceremony, no one produced hahangs for purpose, but found out whether the groom’s family had any old hahang before the wedding. If they had a hahang, the bride’s relatives brought only an arrow for the arrow storage. Late Buryats completely forgot about the hahangs, and the arrow was simply stuck into the pole of the yurt.

Putting a Baby to the Cradle

One more interesting custom was associated with the hahang. When a baby was born, a family holiday titled “Ulgeedeorulkha” (translated as “putting the baby to the cradle”) was held. A fat bull or a cow was stabbed specially for this holiday, they cooked the meat. At that moment, the midwife was holding the baby in one hand and the thigh bone in the other and asked the children who gathered for the holiday: “Whom should I put in the cradle: a baby or a bone?” The children answered: “The baby, of course!” The baby was put to the cradle, and the meat from the thighbone was divided between the children and the midwife. She removed the meat from the bone and tied the bone to one of the belts of the hahang. The bone was an amulet protecting the baby from evil spirits.