“The Titanic of Baikal”: a Hard Worker and an Achiever of the Main Crossing

It is well known that there have always been two problems in Russia, one of which is definitely connected with roads.

The post roads passing through the Baikal region in the 19th century were not characterized by the good quality of the roadway and traffic safety due to natural disasters and a large number of convicts living in the region. The railway that was constructed in Siberia was also unable to solve the problems. The Trans-Siberian railway could not solve the problems of the entire coast of Baikal. Therefore, until the Circum-Baikal Railway was completed, they decided to connect the opposite coasts of the lake by the shortest route: by ferry. By the way, it had existed until 1918 and once again confirmed the rule that no one got accustomed to learn from one’s own historical experience in our country. Indeed, there are still 42 kilometers between Tankhoi and the port of Baikal. Today this road it is the only absolutely straight road across the lake on this section.

About the Creation of an Icebreaker Ferry 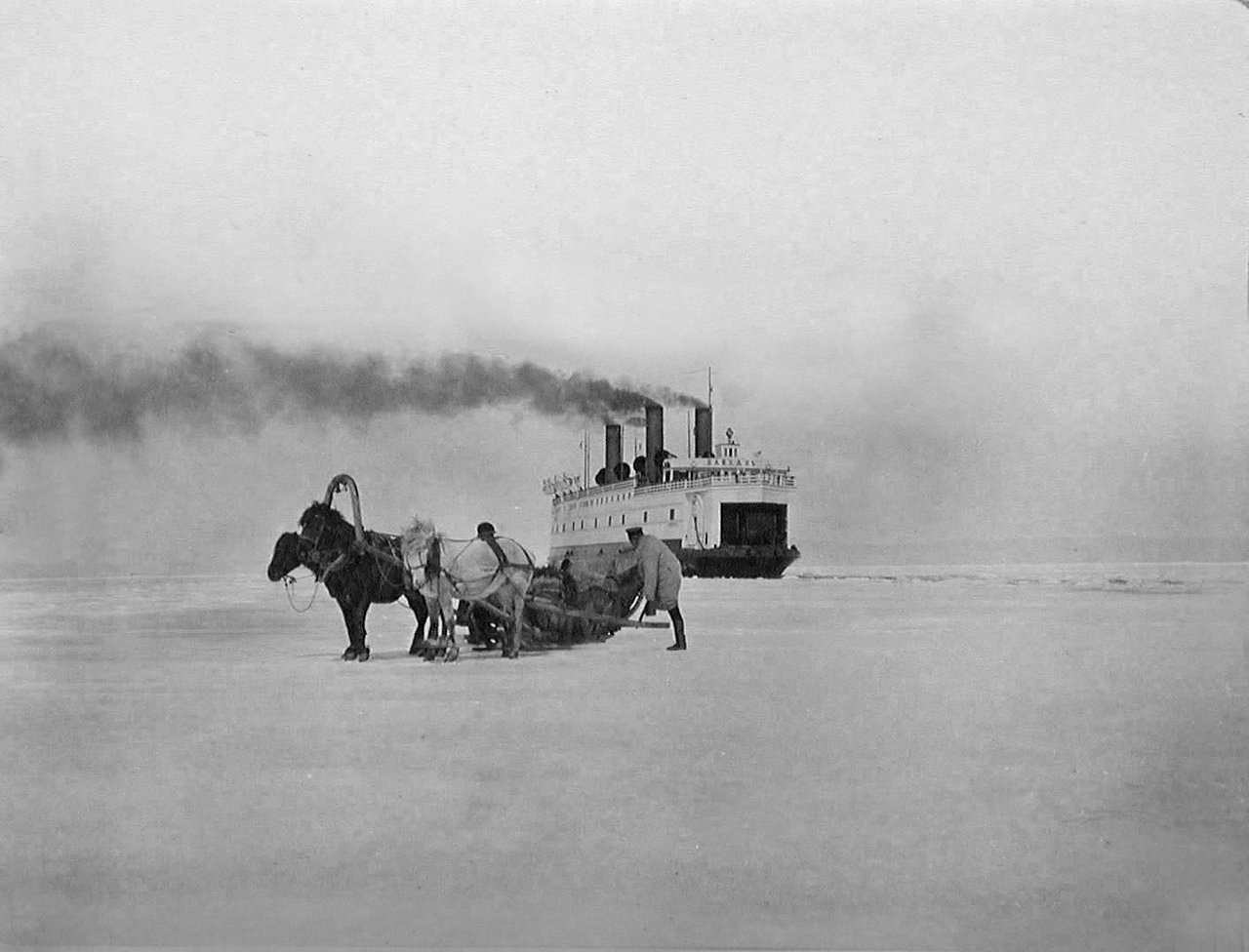 The undertaker of the creation of the ferry crossing was the Minister of Railways of the Russian Empire, M.I. Khilkov. In order to ensure the efficient operation of the crossing, a unique icebreaker was needed, because the winters in Siberia are severe, and the ice is thick and strong. The right to build that icebreaker was the subject of competition among the world’s major companies. The choice was made in favor of the British shipyard “Sir V.G. Armstrong, Whitworth and Co.” Ltd. Initially, the Minister thought that it would be possible to take the American version of a wooden ferry as a sample of the necessary ship, but after visiting Baikal he realized that the carcass could only be made of metal.

After the process of creating the ferry in Newcastle was complete, an unprecedented epic process of its delivery to the coast of Baikal began. The ready-made ship was disassembled into 6900 components that were marked with paint. The components were brought to Revel and St. Petersburg, their total weight exceeded 2500 tons, then these were delivered to the place of destiation from the two starting points: by railway, horses, barges. Even a separate railway line was built to transfer the parts of the ferry, bypassing the irrepressible Padun rapids on the Angara River.

On the Shipbuilding Ways of Listvyanka

In order to recreate the ferry from its separate components, a special shipyard was needed, so this shipyard was built in the village of Listvennichnoye (today it is Listvyanka, one of the most visited tourist places). The mechanical, assembly, foundry, copper smith’s, painting, carpenter’s workshops, a blacksmith’s shop and a  sawmill were involved in the incredibly fast performance of the necessary works: these were led by the naval engineer V.А. Zablotsky and the English representative I. Handy. The works on the body of the ferry were almost completely carried out on the shipbuilding ways. The mounting of cylindrical boilers was particularly difficult, because each of them weighed 17 tons, and it was needed to install as many as 15 pieces of those.

The historic day finally came: the long-awaited day of the launch of ferry. The celebration of this launch was a real mega-event. Early in the morning, many people invited to the celebration started out from Irkutsk, including the archbishop, the Head of the region, representatives of the administrative staff machinery, and “simple” public. The industrial buildings and houses of the village solemnly decorated with traditional ribbons and state flags greeted the guests who took an interest in the huge ferry resembling a Russian rowing boat, painted in red (bottom) and black (sides). The public that came to see the launch of the ferry scheduled for 5:00 p.m. were seated in numerous ships and boats, on the nearby slopes of the mountains, and those with special invitation cards – at the special places close to the ferry. According to the descriptions of eyewitnesses, after the supports were knocked out and the ropes were cut, the “Baikal” ferry “floated” on the water in a stately manner to the sounds of solemn music, accompanied by enthusiastic shouts. Nowadays we have the opportunity to recreate the events of that day in every detail, since a special photo album displaying all the stages of the launch of the ferry to the water has been published.

Apart from the fact that the “Baikal” ferry was the second largest ship that sailed along Baikal, it was also the second largest icebreaker in Russia after “Yenisei”. The ferry could reach the speed of up to 23 kilometers per hour, carry about 300 people and 800 tons of cargo. Ferry decks had their own functional purpose. The task of the bottom deck was the transportation of passenger cars and steam trains. The second deck contained the first, second and third class cabins, a dining room and a richly decorated “royal salon”. The upper deck was meant for walks of the ferry’s passengers. The way between the stations: the port of Baikal - Mysovaya (the initial route that was 73 km long and was later replaced by the route: port of Baikal – Tankhoi) took 4 and a half hours; of course, if the ferry had to go through the ice, a voyage lasted longer.

The Twists of Fate 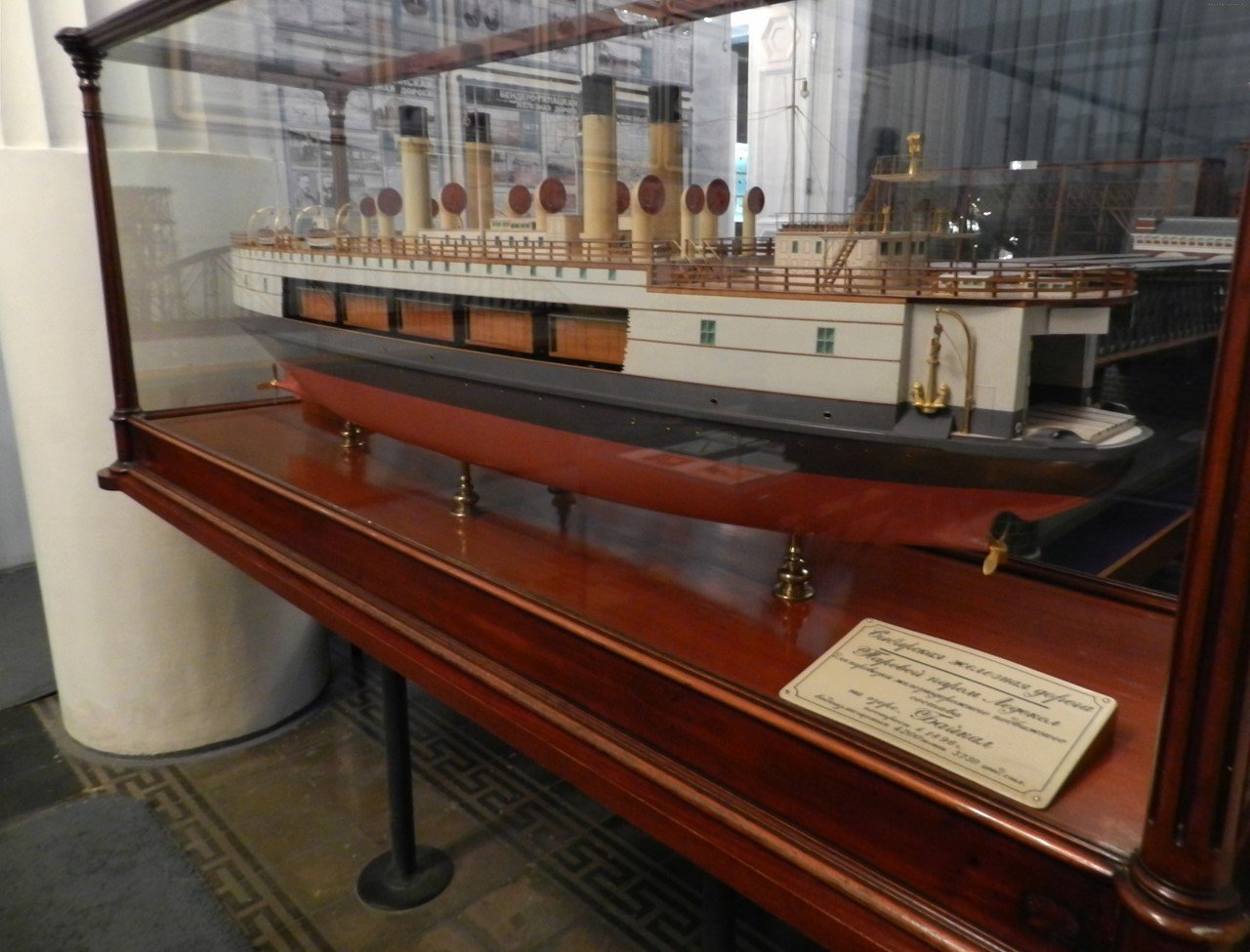 The first official voyage took place on April 24, 1900. The ferry’s operation played a big role in the transportation of industrial and food cargoes, people, livestock, until the end of 1905, when the “Baikal-Slyudyanka port” railway section was completed. The ferry crossing greatly helped during the years of Russo-Japanese War of 1904-1905.

However, the emergence of a permanent railway link virtually eliminated the need for a very difficult winter crossing, although “Baikal” was still used for some time after that, primarily, for the delivery of especially high-priority cargoes and the most important passengers. This was explained quite simply: the ferry had an undoubted speed advantage over the train that was slowly moving along the Circum-Baikal railway, making stops now and then. The events of the Civil War (August 16, 1918) drew a line under the operation of “Baikal” - the ship burned to ashes in one of the battles between the White and Red armies.

Still, the icebreaker ferry was revived as a model being a constituent part of the exposition on the history of Baikal navigation that can be seen at the branch of the Irkutsk Regional Museum of Local History - “Angara” Icebreaker - nowadays.