The People of the Snow: the Customs of the Ancient Tunguses

Here is about the strange customs of the ancient people of Baikal - the Tungus.

Today, it is correct to use the self-designation “Tunguses” only in a historical context. The official definition of the people - Evenkis – appeared in 1931. And it is very difficult to choose a single theory of their origin, because all of these theories are extremely controversial and ambiguous. Nevertheless, one of the most common versions says that the ancestral home of this people is located in Transbaikalia. Nowadays the representatives of this indigenous people of the Russian Federation live in Irkutsk Oblast, Krasnoyarsk and Trans-Baikal Territories, Yakutia, Buryatia, Mongolia and China...

Modern studies have noted that the Evenkis never had a single cultural space. Everything depended on their economic activities - reindeer herding, hunting or fishing.

The Evenki Autonomous District has existed as a separate entity of the Russian Federation until 2007 (now it is a part of the Krasnoyarsk Territory). This is a distant and mysterious land where only a prepared courageous traveler can go.

A significant role in information coverage of the development process of the Baikal region was played by the “Notes of the Siberian (East-Siberian) Department of the Imperial Russian Geographical Society”; the members of the Geographical Society regularly published interesting materials about expeditions around Siberia and the Far East, history, culture, life, religion of the peoples inhabiting these lands.

The issue for the year 1857 published an article by the member of the department P. Clarke,  the work was dedicated not only to the Tungus ethnic group, in his work the author described the unusual customs of this people in every detail and talked about their way of life.

We decided to share this rare information, preserving the style of narration as much as possible. 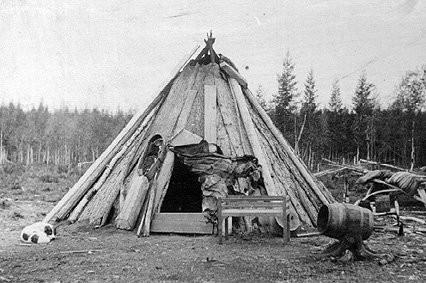 Their habitats are covered with dense forests full of elks that are called “beamy” in Siberia, Far Eastern red deer, squirrels, foxes, hares, wolves and bears. These animals serve as everyday food for the Tunguses; the animals’ skins are used for making clothes, paying tribute (tax in kind paid by peoples of Siberia and the North, mainly in furs), whereas the rest of animals are sexchanged for bread, gunpowder, lead, daba and nankin (types of Chinese fabric).

Some Tunguses that became more Russified than others, keep horses and cows, and therefore choose pasture places for their dwelling, they live in log huts or cone-shaped huts. And their relatives who keep deer, go far away, moving their “urasa” huts made of birch bark (summer dwelling) from place to place almost every day, and they spend the most part of the summer near high ridges covered with snow, and these ridges encircle the coast of Baikal and the upper riches of such rivers as Lena and Kirenga.

The mountain peaks called “bald mountains” are mostly covered with permanent snow, and only those bald mountains that are not especially high get rid from the snow during the last days of June. The local bald mountains are remarkable for the fact that sometimes one can catch sables of better quality there – these are better both in their dark color and in the softness of fur, these animals are also known as “rock” sables.

The birch bark “urasa” hut of the Tunguses who keep reindeer does not provide either much space or any other amenities, apart from protection from rain and wind and simplicity of its daily transportation and installation in a new place. Carpets made from the skin of deer or wild goats serve as beds. A cauldron, several wooden bowls and spoons, birch bark baskets make up the whole household belongings of the Tunguses keeping reindeer. Their belongings also include cradles for infants made of birch bark. The babies laced with a belt lay in those cradles that hang on one of the poles of the hut, and during a journey these cradles are attached on the side of a deer, as the baby sucks upon a lump of fat tied to a stick, so that the baby was unable to completely swallow that nutritious fat.

Reindeer leather high boots, elk trousers, blue shirts made of fabric are common accessories of the Tungus national clothes for both men and women. In summer Tunguses wear short fabric caftans, at that, women prefer blue and green colors; and in winter they wear short deer or goat fur coats, usually, with the coat’s hair up. Tungus men can be distinguished from Tungus women only by the number of braids: men wear one short braid on the back of the head, and women have two braids on both sides of the face.

Men and their adult sons hunt animals, in summer they catch fish, women process animal skins needed for clothing, they twist sewing threads from animal tendons, watch deer and milk them, and collect cowberries in autumn. 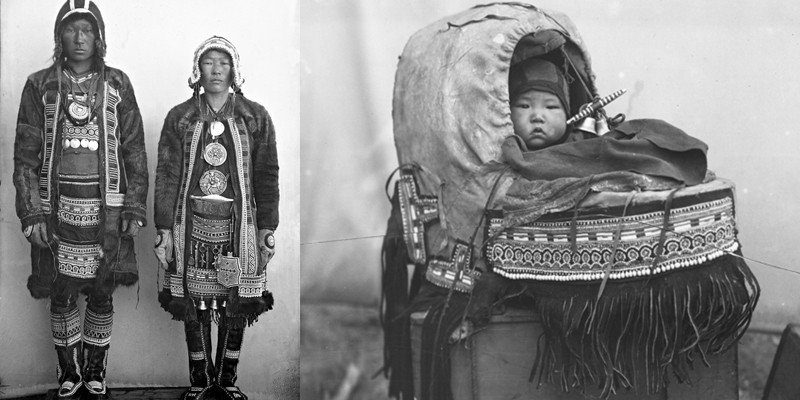 When a child is born, Tunguses give him or her the name of the first person who enters the dwelling or the name of the first animal encountered by the child’s parents. No religious rite is performed upon this event. Many Tungues have adopted Orthodoxy, but the most part of them adhere to brutal shamanism. Marriage ceremony is held in the same way as in Buryat tradition. They seek a bride, often during childhood, pay due bride wealth for her in deer or animal skins. If the groom has a sister, and the bride has a brother, then they exchange their brides, without the payment of a bride wealth.

On the eve of the wedding, the bride's friends – young girls – come to her house and dance all night long. On the day of the wedding they choose the glades and open spaces for hut installation. On the same day the bride with all her relatives and guests pays a visit to the groom. When all food is eaten and all drinks are finished, the groom’s father goes to his dwelling, puts on a fur coat, but puts a  belt on his waist in such a way that the fur coat does not cling to his chest. He sits by the fire waiting for the bride who takes the shredded boiled fat, enters the “urasa” hut, throws the fat at her father-in-law, and if the fat falls under his fur coat, on his open chest, the bride is recognized a righteous girl. All guests are grabbing this fat from the chest of the father-in-law – this fat is considered the best treat there.

In case of someone’s death the body of a dead unbaptized Tungus is dressed in his clothes and taken away into the forest and, put on the ground, and covered with lots of dry fallen deadwood and branches. Then they set fire to this pile of branches and let it burn; is happens quite often that semi-burnt bodies are later eaten by wild animals.