The House of a Million Faces: 110th Anniversary of the Irkutsk Railway Station

Irkutsk is the gate of Lake Baikal, and it has always attracted people. However, a journey to the city was truly epic before the construction of the Trans-Siberian Railway. The road from Moscow could take many months. Today dozens of trains run through Irkutsk every day: someone is traveling from the West to the East, someone in the opposite direction, but everyone stops here and gets acquainted with the railway station of the city that celebrates its 100th anniversary this month. “Key to Baikal” will tell you about this famous building.

The first train really arrived in Irkutsk back in 1898. This solemn and truly significant event took place on August 16. The train that arrived was decorated with flags and garlands, and people greeted it with all proper honors. There was a railway station at that time, too, was, but it was a small building, rather a temporary one.

Irkutsk - already a large city by Siberian standards by that time – had no real railway station for a long time. They to build the railway station at the same time with its expansion. It happened after the defeat in the Russian-Japanese War, when it became clear that it Russia wanted to keep the vast eastern possessions of the empire, it was needed to improve the railway communication, including construction of new railway stations.

The construction of a new station finally began In April 1906, the building complied with all the requirements for such facilities. The new railway station was opened on November 11, 1907.

The two halls of the new building served the passengers of the first, second and third classes. Each room had its own cafes, as well as, toilets, a hairdressing salon, a luggage room, a savings bank, and show rooms. The halls of the first and second classes had parquet floors, the hall of the third class had an asphalt floor. The station platform was paved with tiles. The railway station building has become one of the most beautiful, modern and innovative buildings of the city. One should understand that for the beginning of the 20th century both railways and everything accompanying them was state-of-the-art technology.

In the old building of the railway station had a telegraph service, an office of the station duty officer at.  A part of the building was designed for passengers of the 4th class and settlers, and a part of it was given for the storage of the hand luggage of passengers of the first three classes.

There was a building performing postal operations next to the old railway station. Another two-storey house there had a telegraph on the second floor, as well as a guard and an apartment of a non-commissioned officer on the first floor. 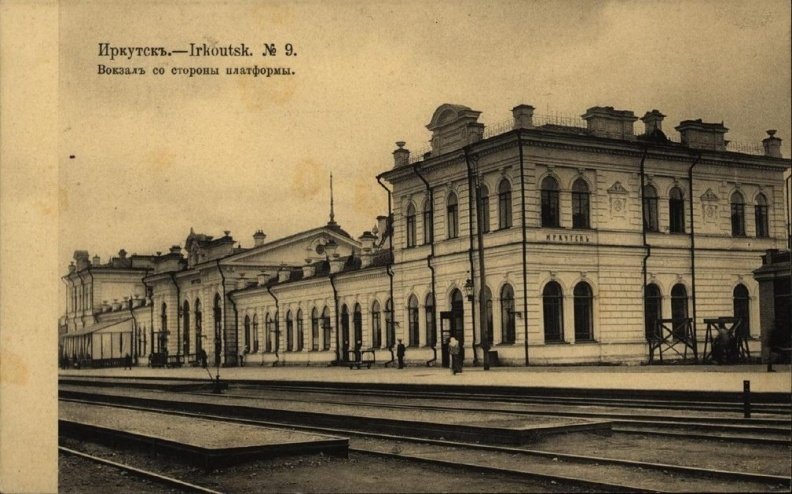 Changed were made on the territory of the station with the course of them, and the railway station was reconstructed. A new station building was built in 1907 and a passenger building built in 1898 were joined together by yet another corps. The newly built transition was made in the style of previous buildings. And the first railway station was complemented by a second floor, its appearance was changed, as well as its layout inside.

Before the construction of a reinforced concrete bridge across the main Irkutsk river - Angara - the railway station was connection to the city through a wooden crossover and a pontoon bridge. But already in the 1930 there were plans to build a tram ways to connect the city with the railway station, so after the construction of a reinforced concrete bridge over Angara, the wooden crossover was replaced by a metallic one.

Further development of the main railway line was planned as the design of new directions. In late 1930s the issue of bypassing the Circum-Baikal section of the East Siberian Railway has become topical. The Irkutsk railway station was once again threatened to stay away from the main line, however, this was not the situation that could happen during the construction of the Trans-Siberian Railway. However, the city could not already be left without a railway station.

The passage of trains over the lake was extremely inconvenient and required different solutions that would be optimal from the point of view of logistics. In addition, although the Circum-Baikal Railway was a very picturesque part of the Trans-Siberian Railway, landslides often happened on this part, which made the communication between Central Russia and the Far East all the more difficult.

In 1936 following the instructions of the Peoples Commissariat of Railways, a study of a possibility of bypassing Lake Baikal started. And already in 1939 “Soyuztransproekt” (transportation agency) had to hold design and exploration works and prepare a project of a  new double-track railway line from Irkutsk II (Irkutsk classification station) through the valley of the Olkha river with a descent at the Slyudyanka station. The design works were to be completed by August 1, 1940, and the construction of the new railway line - by August 1942. The order was not abolished even fter the beginning of the Great Patriotic War. The works have carried out, as it was stipulated by the order.

The construction of a transshipment railway line had to be launched in March 1941, was constructed in a one-track version only in 1949. In 1956, when almost the entire Irkutsk-Baikal railway section was flooded as a result of construction of the Irkutsk hydroelectric power station, the trains ran along the new, double-track line: Irkutsk – Bolshoy Lug - Slyudyanka.

Then it was considered that due to the heavy profile of the transshipment line, it would soon be unable to handle the growing freight turnover. One of the possible options for increasing the capacity of the Irkutsk-Slyudyanka section was the construction of the Irkutsk-Baikal line, bypassing the flooded area. But this project was never implemented.

In the first half of 1960s. during the next reconstruction of the railway station, a suburban pavilion was attached to it, a pedestrian tunnel was built, the premises layout was replanned, the square near the railway station was expanded and improved. Another reconstruction of the building was carried out in connection with the centenary of the arrival of the first train to Irkutsk, and finally, in 2004 the station acquired its modern looks.

This building remembers the terrible years of the civil war, remembers the faces of the Siberians who went to defend Moscow in 1941 and those who went to the east to fight against Japan four years later. The station was the place that accepted immigrants, politicians and even royal persons, as well as ordinary passengers and travelers.